A shakeup at the Democratic National Convention meeting in Las Vegas is calling into question the influence Ellison is having in his new role. A purge of party officials loyal to Keith Ellison is putting the deputy chair of the Democratic National Committee in a difficult position, calling into question his ability to shape DNC decision-making.

Ellison’s decision to accept the number two spot at the DNC was controversial among his backers, but he argued that he would be able to influence the party from the inside, and help steer Chair Tom Perez in a progressive direction.

It’s a dilemma as old as politics itself, but the question of how to navigate in relation to the DNC is complicated by the party committee’s toxic political reputation among backers of the presidential bid of Sen. Bernie Sanders. If Ellison can’t reform the DNC, he risks becoming seen by a swath of the party as an apologist for it instead.

On Thursday, four long-serving DNC officials who had backed Ellison’s bid to be DNC chair were removed from their positions. Ray Buckley, James Zogby, and Barbra Casbar Siperstein were bounced from the executive committee, and Buckley was also taken off the rules committee, on which he served as well. Alice Germond lost her at-large appointment.

“I think Tom is putting Keith in a tough spot,” said Claire Sandberg, the digital organizer for Sanders’s 2016 campaign. “He’s been working in good faith to convince grassroots progressives not to give up on the Democratic Party and its institutions. But that will be a much more difficult task now.”

People close to Ellison say that he is feeling the heat and acutely aware of the difficulty he is in, unsure exactly how to do right by the party faithful. Karthik Ganapathy, a spokesperson for Ellison, declined to comment on the unfolding situation.

“It’s clear by what he’s not saying right now that he’s trying to play the role he signed up for and work behind the scenes. Keith’s next move comes down to whether Perez fulfills the promises he made,” said Becky Bond, a senior adviser to the 2016 campaign of Bernie Sanders. “Perez is putting Ellison in a really tough spot.”

Julia Barnes, who ran the Sanders campaign in New Hampshire, said that Buckley, as head of the party there, was relentlessly fair to the independent candidate making a bid in the Democratic primary. “He exemplified the kind of neutrality that everyone, especially from the Bernie campaign, was looking for,” she said.

Buckley made a bid for DNC chair earlier this year, running on a platform of reform. His familiarity with the arcane rules, bylaws, and byzantine procedures of the DNC is widely considered to be unmatched. After he dropped out, he backed Ellison’s bid for chair, opening up the perception that he was removed by Perez for supporting his opponent.

Xochitl Hinojosa, a spokesperson for the DNC, said that none of the moves were made in retaliation or for any political purpose other than expanding diversity and unifying the party. Ellison’s recommendations were taken into consideration, she said, and Ellison and Perez have remained in close contact throughout the gathering in Las Vegas. 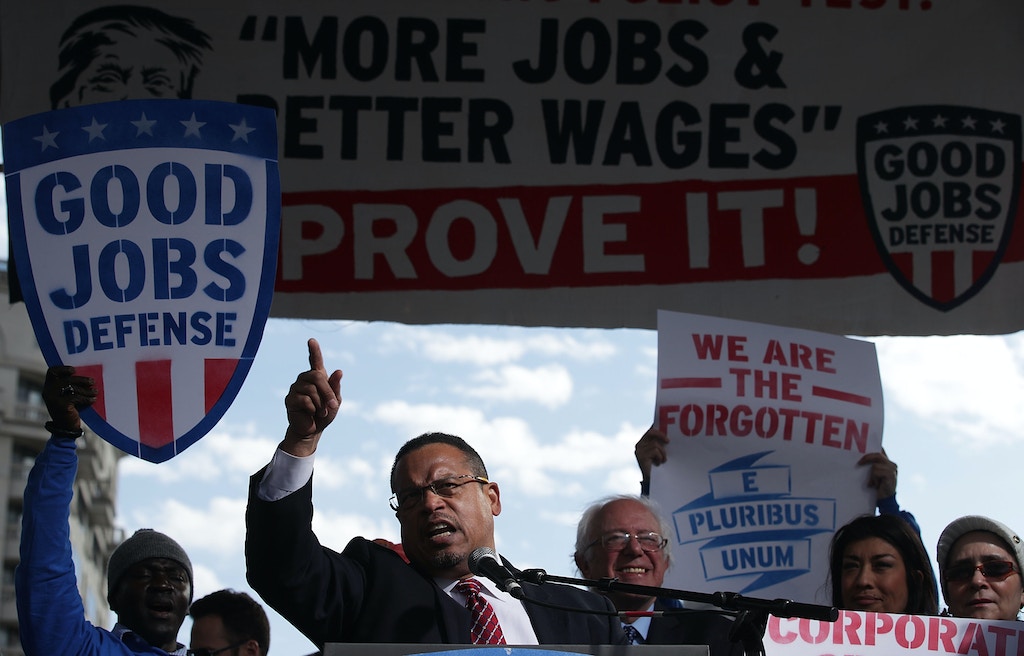 Barnes said that many Sanders backers are watching Ellison’s experience with the DNC for signs of whether the party system is on the up and up:

“For folks who believed in Sen. Sanders and volunteered for the campaign and followed the DNC chair election, Congressman Ellison is more than deputy chair. He is to them something that is going to indicate whether some of the complaints, whether they were legitimate or not, are being addressed sincerely. The stakes for him being successful in navigating those relationships and showing that the party can move in a progressive direction are high, because folks are already predisposed not to trust it.”

The public response from Perez to complaints from Ellison backers has only exacerbated the tensions, as Perez, like Hinojosa, has insisted that the changes were made only for the sake of “diversity.”

One paragraph in an NBC News story on the dustup was almost a parody of the tactic of cloaking ideological or political moves in liberal rhetoric about identity:

The DNC denied any retaliation, saying that the changes were an effort to diversify and freshen the party’s leadership and that all the party’s officers had a chance to offer input. They touted new additions like Marisa Richmond, a millennial black transgender activist, and the first Dreamer member, Ellie Perez, to point to the DNC’s efforts at diversity.

In fact, the DNC went overboard in its box-checking: It’s a stretch to call Richmond a millennial; she’s 58 years old and has been an activist longer than many millennials have been alive. 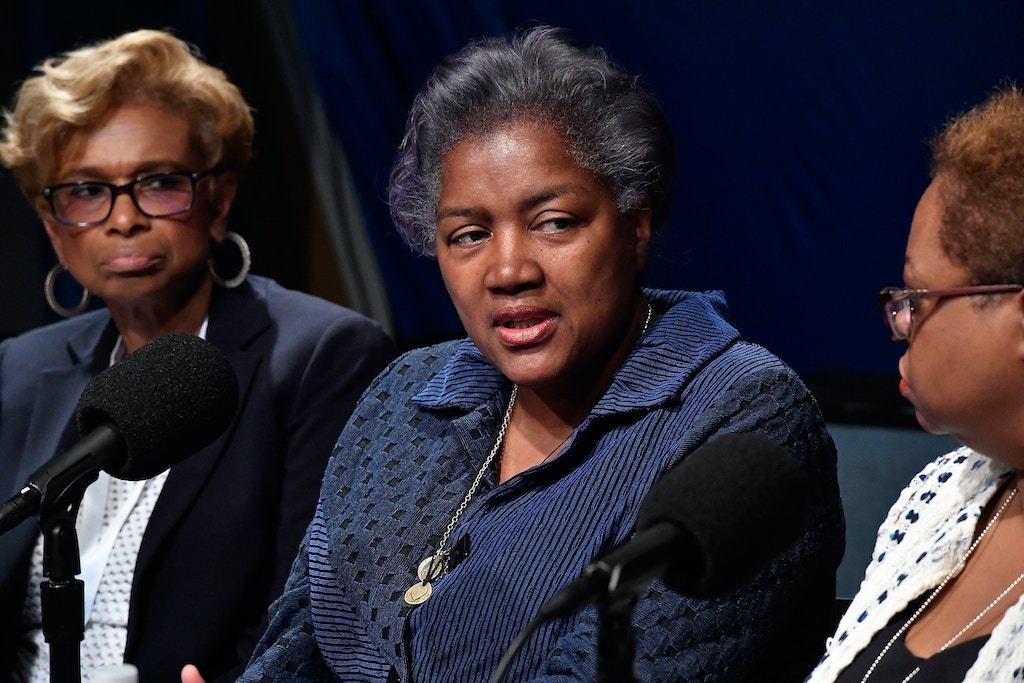 It all harkens back to the 2016 primary, in which critics of Hillary Clinton were routinely told their opposition was rooted in sexism and, somehow, racism as well. Now as Sanders and Ellison backers jockey for influence on the key committees, they are once again being told, in so many words, that they are bigots.

Yet the three Ellison backers removed from the key committees are themselves a diverse bunch. Ellison, of course, is African-American, Muslim, and represents a working-class district, while Barbra Casbar Siperstein is transgender, Zogby is Lebanese-American (and Catholic), and Buckley is gay.

Ellison supporters are also frustrated by the repeated switching of the conversation from the executive and rules committees, which have power and matter, to the at-large members, who have very little. “The DNC is spinning it as being about diversity and focusing on at-large, but we know the real power is with the committees, and the rules committee in particular, [which] determines rules for primaries and caucuses,” said Bond.

“The rules committee is where recommendations from the unity committee go. That’s where the grassroots of the party, the people that Keith Ellison represents, are being retaliated against, and that’s where you need to look if you want to see if Perez is really trying to unify the party, or consolidate power for the Clinton wing of the party.”

Bond and Sandberg said that Ellison making progress inside the DNC will be viewed as a proxy for how open the party is to a big-tent coalition that includes the left flank. “Many activists who supported Bernie in the presidential election and who supported Keith for DNC chair were willing to take another chance on the DNC when he agreed to become vice chair,” said Sandberg. “Increasingly it’s appeared to everyone on the outside that Tom Perez’s role is simply to block Keith from making any of the strategic shifts that activists know are necessary to make the primary system fair and makes the party work for the people rather than the corporate donors and the vendors.”

While removing long-serving DNC members seen as favorable to Ellison and Sanders, Perez moved to maintain positions at the party for a number of corporate lobbyists.

Other Democratic influence peddlers chosen by Perez as at-large members are not registered lobbyists, but work at well-known corporate lobbying firms. Maria Cardona and Minyon Moore, two prominent supports of the Clinton campaign, both work at Dewey Square Group. The Dewey Square Group has long served to advise special interests on influencing the policy debate. The company was previously hired by health insurers to fight aspects of the Affordable Care Act, and before that, worked for the subprime mortgage company Countrywide to build support for the company on Capitol Hill. Dewey Square’s currently counts major firms such as Walgreens, Tenet Health, Spectra Energy, Capital One, and Apple as clients. (Moore is one of the women mentioned as under attack in the BuzzFeed story.)

As at-large members of the DNC, the lobbyists will simultaneously serve as so-called “super-delegates” with the ability to vote for a Democratic presidential candidate at the convention in 2020, though they do not have a say over the rules around primaries or other key issues handled by the central committees.

“The Democratic Party will only succeed in stopping Trump and the Republicans in Congress if it is a boldly progressive, multiracial, populist party. So it’s troubling to see the DNC seem to purge people from its leadership simply because they supported the progressive candidacy of Keith Ellison for chair,” said Joe Dinkin, spokesman for the Working Families Party. “For the sake of the nation, the DNC should reverse course, spend less time courting big donors, and more time bringing progressives voices into the party, instead of silencing them.”

It’s not all a series of defeats for the Sanders camp, though. On Friday, the DNC passed a resolution rejecting corporate money that is in conflict with the party platform.

The news was quickly followed by a tweet from Christine Pelosi noting that, in fact, she had been pushing for the resolution for a long time.

It's MY work - I'm glad Berniecrats like it too / but do not erase me. #badlook #sexist

With unity off to a bang-up start in Las Vegas, Zogby is considering making a new run to get back on the executive committee, and has been outspoken in opposition to Perez’s move against him and the others. Zogby said that he has spoken to Perez since, but that DNC leadership had not communicated a reason for the purge. “I have no idea why this happened. All I know is that the optics were not good,” Zogby said. “It wasn’t necessary, and it wasn’t helpful for building the unity we need in 2018 and 2020.”

If he can’t win a spot on the executive committee, Zogby said that he was worried that he would no longer be able to guide the party reform proposals he put forward in the unity reform commission — an ongoing reconciliation effort between different wings of the party.

An earlier version of this story misspelled the name of Jaime Harrison.

Top photo: U.S. Rep. Keith Ellison, D-Minn., listens during a forum on the future of the Democratic Party in Denver on Dec. 2, 2016.