The Trump administration has abdicated responsibility to help consumers decide what health care plan to buy, but we have some advice. Open enrollment for health insurance will begin November 1, and the Trump administration has abdicated its responsibility to help consumers wade their way through it. Former President Barack Obama’s team, meanwhile, in writing the law, abdicated its responsibility to not make shopping for health insurance infuriatingly confusing.

President Donald Trump is doing what he can to add to that confusion and chaos. His decision this month to end cost-sharing subsidies to insurers was just one step his administration took to throw the process of selecting insurance into disarray. The executive branch also shortened the window during which people can sign up for health insurance, then slashed the advertising budget to notify the public about this change by 90 percent. The administration took other executive actions that indirectly make selecting a plan this year significantly more confusing and dramatically cut funding to navigators who are supposed to help people try to understand the plan selection process.

Although Trump has worked actively to sabotage the Affordable Care Act, also known as Obamacare, the law was flawed at inception, and figuring out what insurance plan best meets your needs has always been complicated.

For starters, though, you should know that the health insurance marketplace comprises four main tiers of insurance coverage: bronze, silver, gold, and platinum. Bronze plans tend to have the lowest premiums but the highest deductibles, so they are what healthy people should choose. Platinum plans have high premiums but the lowest deductibles, which is good for people with medical problems. Silver is supposed to be in the middle, but another provision in the law means it isn’t always so (more on that below).

In light of the White House’s dereliction of its duty to help consumers navigate the marketplace, we offer four tips that could save you or someone you know hundreds or even thousands of dollars. While every individual’s situation is unique and some details vary from state to state, this advice should apply to most: The HealthCare.gov website is displayed on a computer screen Oct. 18, 2017, in Washington.

But what does this advice mean, and how did we get here?

The Affordable Care Act provides two ways to help individuals with modest incomes afford health care on the exchanges. The first is premium tax credits, sliding-scale subsidies that reduce the premiums of any plan on the exchange for people making between 100 and 400 percent of the federal poverty level, or FPL, which is roughly $12,000 to $48,000 for an individual. Premium tax credits are based on the cost of the second-cheapest silver plan.

The second subsidy program is the cost-sharing reduction, sometimes called “extra savings” on the exchanges. If you make between 100 and 250 percent of the FPL (about $12,000 to $29,000 for an individual), this program lowers your deductibles and out-of-pocket costs by different amounts based on your income — but only if you select a silver plan. This means even though a silver plan has lower premiums and is technically a worse plan than a platinum plan, if your income is below $17,500, the cost-sharing reduction program can make a silver plan effectively better than a platinum one.

Not selecting a silver plan if your income falls in this range effectively amounts to leaving free money on the table.

Obamacare’s initial inclusion of these different forms of subsidies was highly questionable and confusing. The law could have been simpler if it had structured the premium tax credits so that low-income people could just afford platinum plans, rather than make them buy silver plans that act like platinum ones. Instead, the Affordable Care Act created marketplaces that encourage people with certain incomes to shop among different metal tiers, while also strongly discouraging people with slightly lower incomes from comparing the different tiers. This was already difficult enough to try to explain to individuals looking to buy health insurance.

Now, the Trump administration has made it even more complex by refusing to provide cost-sharing reductions payments to insurers, making gold plans potentially cheaper for some people than silver plans.

This move leaves insurers and local regulators with a real problem. Insurers by law still have to provide the same cost-sharing reductions to people who buy silver plans, regardless of whether the federal government repays them right away.

As a result, insurers are going to need to raise premiums to cover the cost of that missing federal funding. This, in turn, will cause federal spending on premium tax credits to go up, since the premium tax credits are based on the size of premiums. This act of sabotage will likely even end up actually costing the federal government more money. All it really does is sow confusion for confusion’s sake.

Individuals who make less than 200 percent of the FPL will still get large cost-sharing reductions and premium tax credits under a silver plan, so they should still go for that tier. But for people who make more than that, insurance shopping could become more difficult, depending on how companies choose to raise their premiums.

This means many people who qualify for the premium tax credits could potentially get better gold plans for about the same or less than the cost of a silver plan, since insurers in many states are being told to purposely overcharge for silver plans. So, in most states, if you make over 250 percent of the FPL, buying a silver plan would be a terrible move, which is why you don’t want to let yourself be auto-enrolled in one. You could potentially save a significant amount by switching to a different metal tier.

Unfortunately, if you make between 200 and 250 percent of the FPL, things are even more complicated. You still qualify for cost-sharing reductions if you buy a silver plan, but they only provide a small amount of help for people with these incomes. In states where insurers are increasing premiums across metal tiers, such as Colorado and Indiana, you are better off with a silver plan. In other states, where the extra cost is falling only on silver plans, you might end up finding gold plans that cost almost the same as silver plans. If the price difference is small, you probably want a gold plan; if not, you want a silver one. 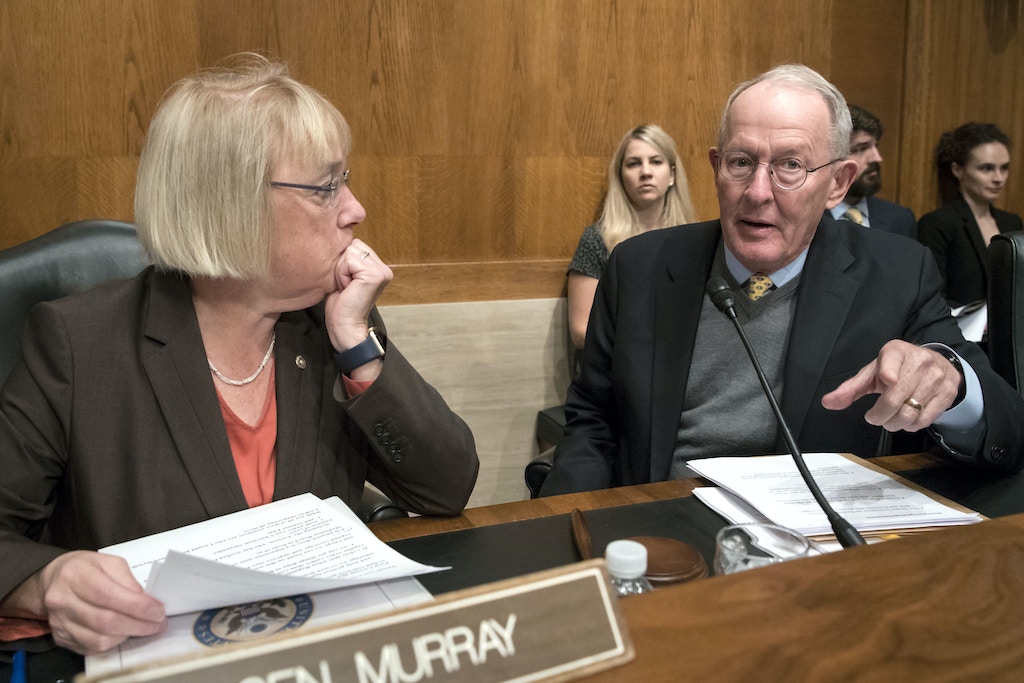 Sen. Patty Murray, D-Wash., the ranking member, and Sen. Lamar Alexander, R-Tenn., chair of the Senate Health, Education, Labor, and Pensions Committee, meet before the start of a hearing on Capitol Hill in Washington, Oct. 18, 2017.

There’s one more added wrinkle. Sens. Patty Murray, D-Wash., and Lamar Alexander, R-Tenn., have been working on a small bipartisan bill to stabilize the exchanges. One of the provisions in their possible deal would be to appropriate the money to insurers to pay for the cost-sharing reductions for the next two years. In addition, their deal charges individual states with coming up with a way to return money to exchange customers whose premiums went up because of insurers trying to cover their cost-sharing reduction obligations. This could in theory mean that even if you make over 250 percent of the FPL and accidentally end up buying an overpriced silver plan, you might eventually get some of your money back.

It’s not clear, though, how states would deal with the mandate to return money to consumers, so the benefits of that part of the bill seem far-fetched at the moment.

The minutiae of shopping for health care certainly vary based on personal health status and the ways in which different states and insurers are trying to deal with this current artificial crisis. But if you keep in mind the four tips above, you’ll be way ahead of the curve as you tackle the confusing process of choosing a plan that works for you.

Given what the attempt at a market-based plan looks like, maybe we should just do that for everybody.