She Fled Persecution For Being Gay. Hostile Questioning at U.S. Border Made Her Afraid to Tell The Truth.

Advocates say her case is emblematic of how hard it can be for people who’ve experienced trauma to make it past the first step in the asylum process. Sitting in an interrogation room at Dulles International Airport, Ella was paralyzed with fear. Terrified by the uniformed immigration officials lobbing questions at her, the 23-year-old Ugandan woman could think of only one thing: “I can’t go home.”

One year earlier, Ella had been caught in her village in bed with her female partner. Rounded up and taken out into the streets, she and her partner were forced to march naked through the village while being taunted, jeered at, and burned with searing paraffin oil. Police intervened to stop the mob from killing the women, but they arrested both Ella and her partner on charges of immorality. She was beaten in police custody.

After their release the pair fled to Uganda’s capital, Kampala, where they attempted to live in hiding. But the worst was still to come: Ella’s family was determined to find and punish her, so they hired a man to track her down in the city. The man began stalking her and sending threatening messages. Eventually, he found her alone and raped her, in an effort to “cure” her homosexuality by impregnating her.

Ella arrived at Dulles airport in Virginia this August on a student visa she had obtained to attend a small college in the state. But she needed time to gather herself after her ordeal and wanted to defer her enrollment for a semester and request political asylum. She planned to meet a cousin in Seattle who knew about her plight and offered to take her in. (Ella is a pseudonym, as the woman is still under threat from her family members.)

“When I got to Washington I was interviewed by the officers, they saw that I had some tickets to go stay at my cousin’s place, and she said you’re not going to school,” Ella recounted in a conversation with The Intercept. “They took away my phone, and I couldn’t call anyone who could explain. I tried to tell them what was happening with me, but they didn’t understand.”

As a person fleeing violent oppression, Ella could have asked for asylum. If Customs and Border Protection determined that she had a “credible fear” of returning home, she could stay in the United States while her asylum claim was adjudicated.

But Ella wasn’t able to articulate what had happened to her. In response to questions from The Intercept, a spokesperson for CBP said that Ella admitted that “she had no intention of attending school” and said that she was going to Seattle to visit her boyfriend.” CBP also stated that “this traveler declined the opportunity to apply for political asylum and denied any fear of returning to her home country.”

Ella says that she simply broke down under questioning and went along with what CBP demanded of her.

“You cannot imagine what it is like to sit before an officer who has your whole life in her hands,” Ella wrote in a statement she provided to The Intercept. She “thought the new president does not like gay people, and if I told the officer I was gay, she would deport me on the spot.” She said that the officer “forced me to say that my cousin was my boyfriend, because that is what she wanted to hear.”

In our telephone interview, Ella choked up. “For my whole life, I had to hide my sexuality and the whole time I was there being questioned, I didn’t know what to say. All I was thinking was I was afraid to tell them and afraid to be raped again.” 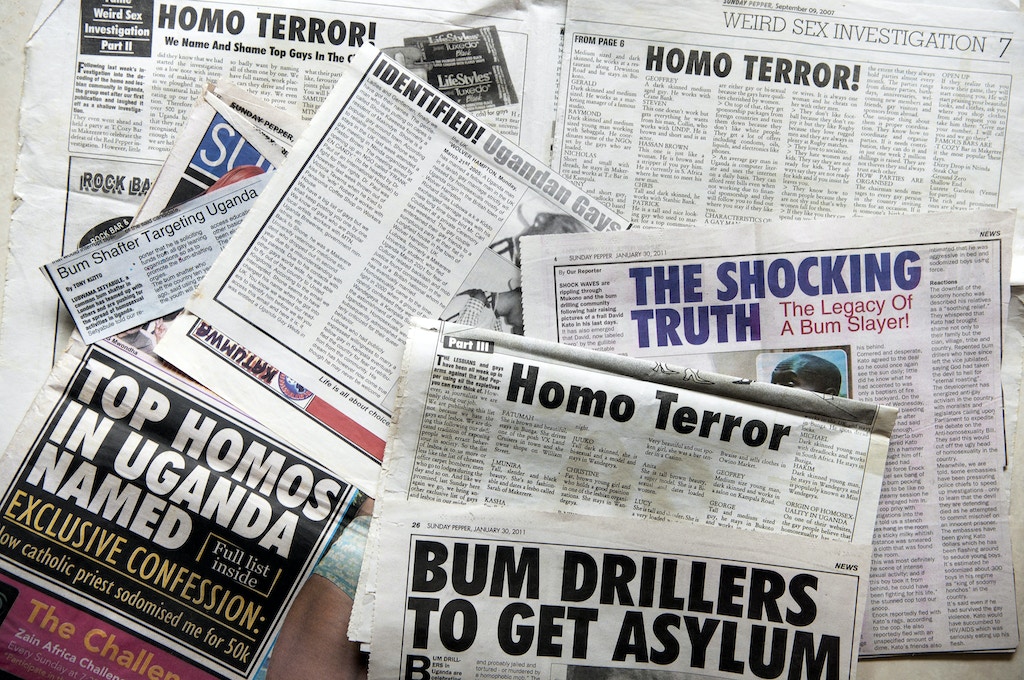 Ella’s story illustrates how hard it can be for complex cases, especially those involving trauma, to make it past the first step in the asylum process. Advocates say that rather than taking these sensitivities into consideration, the Trump administration is instead making it harder for vulnerable people with legitimate claims.

A lawsuit filed earlier this year accused CBP and Homeland Security officials of engaging in “systematic” violation of the rights of asylum-seekers, particularly at the southern border. But experts say that denial of legitimate asylum claims are happening at ports of entry throughout the country, including airports. Reports say CBP officials have denied access to counsel, failed to record expressions of fear, or intimidated asylum-seekers until they recanted their claims. An increase in the use of fast-track deportation proceedings, known as “expedited removal,” also means that asylum-seekers can be ordered out of the country without a chance to make their case.

At a high level, the Trump administration has sought to delegitimize the asylum process as a whole, with Attorney General Jeff Sessions saying recently that the “system is subject to rampant abuse and fraud” and “overloaded with fake claims.” Rights groups say that there is no basis to those claims.

“This is part of a larger picture of how asylum-seekers are being treated at the border,” says Azadeh N. Shahshahani, a human rights attorney with the advocacy group Project South. “Treatment of asylum-seekers by CBP was already a problem during Obama administration, but with the changes that have occurred since Trump came to office – particularly the executive orders on immigration – instances of mistreatment and denial of entry are likely going to get worse.”

A spokesperson for CBP told The Intercept that the agency “strives to treat all travelers with respect and in a professional manner,” and that its officers are “extensively trained to detect verbal and non-verbal communications cues of travelers in distress.” They added that “during the secondary examination, CBP officers ask inadmissible foreign nationals multiple questions concerning whether they possess any fear or concern about being returned to their home country.”

For many people detained at the border the problem is simple: They lack access to legal counsel. CBP says that “admissibility determinations are administrative actions, not criminal investigations” and points to existing regulations that state there is no right to a lawyer during inspections. Legislation filed by Sen. Kamala Harris, D-Calif., earlier this year would mandate that people in detention at border checkpoints be able to talk with an attorney. The bill was filed partly in response to chaotic airport scenes following Trump’s first travel ban. Speaking at the time, Harris stated that her intention was to ensure that “when [detained] individuals ask to speak to the lawyer [who] is literally on the other side of the door waiting to talk to them, they are not denied that request.”

While Ella was being held at Dulles, a lawyer contacted by her cousin repeatedly tried to call Ella in detention, but was denied access to her by CBP officials. Had the lawyer been able to speak with her, making an asylum claim would have been straightforward.

“Ella’s case shows a badly broken system that allows officers to deny the basic human right to seek protection to the most vulnerable — those who lack the capacity to even talk about what they’ve been through,” said the lawyer, Hassan Ahmad, a legal activist with the Dulles Justice Coalition. “A system that denies detained people access to counsel and one that also removes [CBP] officers from accountability.”

Instead, Ella was subjected to expedited removal and ordered back to Uganda immediately. Under the expedited removal process, first introduced in 1996 under the Clinton administration, CBP officials have broad latitude to subject individuals at the border to immediate deportation. Unlike other deportation cases that often need legal oversight, only one CBP officer and a supervisor need to sign off on an expedited removal.

The federal government seems to be moving forward with plans to expand the use of expedited removal procedures throughout the country, putting both undocumented residents and potential asylum-seekers at greatly increased risk of detention and deportation. In contrast to claims by Sessions and others that asylum-seekers are being coached to game the system, many, like Ella, arrive at the border terrified, distraught and unable to express the reason they fled their homes.

“It is quite common to feel intimidated talking about trauma, particularly sexual trauma, in front of an armed guard at the border, which is one of the reasons why expedited removal is such a troubling practice,” said Clara Long, a researcher at Human Rights Watch. “Someone being turned away without a fair chance to present their asylum claims – then given a deportation order that removes their chance of ever receiving asylum in the future – shows how serious the flaws are in the treatment of vulnerable people at the border.”

Ella got on the plane back to Uganda in a state of near panic and spent the long flight crying. During her layover in Dubai, she fled the plane. She was granted temporary accomdation by officials from the United Nations High Commissioner for Refugees, who were made aware of her case though Ahmad and other activists, and allowed to live in the airport for roughly a month. From there, she was sent to Kenya, where Ugandans are allowed to live legally for a short period of time. She’s still in Kenya today, staying with friends, in a state of legal limbo.

Lawyers for Ella in the United States have filed a motion to reconsider her removal, calling on CBP to rescind their expedited removal order. Medical and psychological evaluations included in their filing demonstrate that she has “several strong indicators of anxiety and post-traumatic stress disorder,” as well as physical injuries consistent with rape and with other repeated instances of torture. Her lawyers have asked for her to be paroled back to the United States to make an asylum claim, but so far CBP has refused this request.

“There is no way I can go back to Uganda after everything that happened,” Ella told The Intercept. “All I want is a chance to come back [to the U.S.] to make my case.”

Top photo: Girls attend the “Social Friday” at FARUG, a monthly appointment for the lesbian community, where they can chat and watch movies in a safe environment in Kampala, Uganda, in June 2016.