The crackdown will test the claims of Saudi Arabia- and UAE-backed Washington think tanks that say they pride themselves on their ability to speak freely. 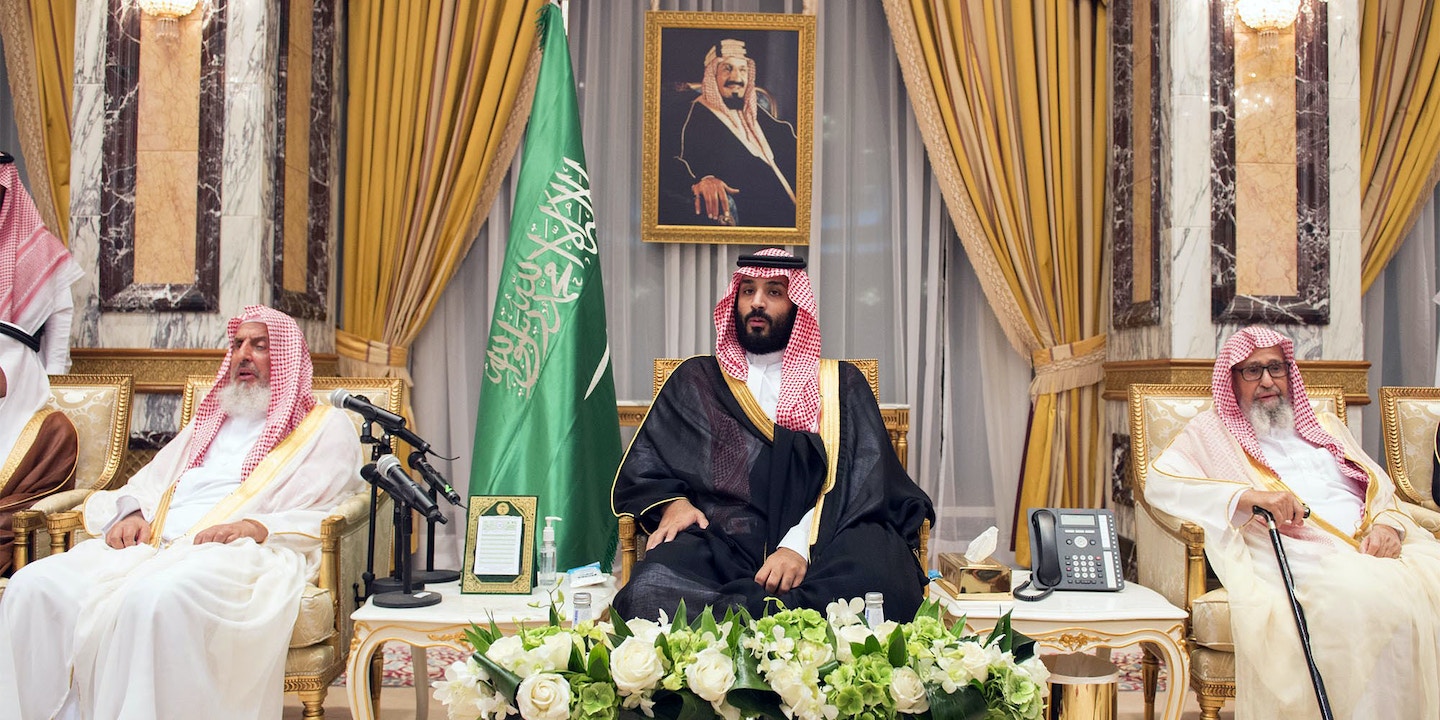 The mass arrest of high-ranking Saudi businessmen, media figures, and royal family members Saturday has shaken the global business community. Among 10 other princes and 38 others, the roundup netted Prince Alwaleed bin Talal, one of the world’s richest men, who owns significant shares in everything from Citibank to Twitter to the parent company of Fox News.

Prince Alwaleed has done business with President Donald Trump in the past, but during the campaign turned into a fiery critic, drawing Trump’s Twitter ire.

Dopey Prince @Alwaleed_Talal wants to control our U.S. politicians with daddy’s money. Can’t do it when I get elected. #Trump2016

The move against Alwaleed and the other officials was couched as the result of a secret investigation carried out by a “high committee on fighting corruption.” Minister of Education Ahmed Bin Mohammed Al-Issa “hailed the royal decree,” according to the Saudi Press Agency, saying, “this committee heralds a future of firmness against those who are trying to to undermine the capabilities of the homeland.”

Whatever the official explanation, it is being read around the world as a power grab by the kingdom’s rising crown prince. “The sweeping campaign of arrests appears to be the latest move to consolidate the power of Crown Prince Mohammed bin Salman, the favorite son and top adviser of King Salman,” as the New York Times put it. “The king had decreed the creation of a powerful new anti-corruption committee, headed by the crown prince, only hours before the committee ordered the arrests.

The men are being held in the Ritz-Carlton Riyadh. “There is no jail for royals,” a Saudi source noted.

The move marks a moment of reckoning for Washington’s foreign policy establishment, which struck a bargain of sorts with Mohammed bin Salman, known as MBS, and Yousef Al Otaiba, the United Arab Emirates ambassador to the U.S. who has been MBS’s leading advocate in Washington. The unspoken arrangement was clear: The UAE and Saudi Arabia would pump millions into Washington’s political ecosystem while mouthing a belief in “reform,” and Washington would pretend to believe that they meant it. MBS has won praise for some policies, like an openness to reconsidering Saudi Arabia’s ban on women drivers.

Meanwhile, however, the 32-year-old MBS has been pursuing a dangerously impulsive and aggressive regional policy, which has included a heightening of tensions with Iran, a catastrophic war on Yemen, and a blockade of ostensible ally Qatar. Those regional policies have been disasters for the millions who have suffered the consequences, including the starving people of Yemen, as well as for Saudi Arabia, but MBS has dug in harder and harder. And his supporters in Washington have not blinked. Saudi guards in the Ritz-Carlton Riyadh.

The platitudes about reform were also challenged by recent mass arrests of religious figures and repression of anything that has remotely approached less than full support of MBS.

Would very much appreciate Saudi Arabia doing their IPO of Aramco with the New York Stock Exchange. Important to the United States!

Whatever legitimate debate there was about MBS ended Saturday — his drive to consolidate power is now too obvious to ignore. And that puts denizens of Washington’s think tank world in a difficult spot, as they have come to rely heavily on the Saudi and UAE end of the bargain. As The Intercept reported earlier, one think tank alone, the Middle East Institute, got a massive $20 million commitment from the UAE.

And make no mistake, MBS is a project of the UAE — an odd turn of events given the relative sizes of the two countries. “Our relationship with them is based on strategic depth, shared interests, and most importantly the hope that we could influence them. Not the other way around,” Otaiba has said privately. For the past two years, Otaiba has introduced MBS around Washington and offered assurances of his commitment to modernizing and reforming Saudi Arabia, according to people who’ve spoken with him, confirmed by emails leaked by the group, Global Leaks. When confronted with damning headlines, Otaiba tends to acknowledge the reform project is a work in progress, but insists that it is progress nonetheless, and in MBS resides the best chance of the region.

“I don’t think we’ll ever see a more pragmatic leader in that country. Which is why engaging with them is so important and will yield the most results we can ever get out of saudi,” Otaiba said in one representative note. “I think MBS is far more pragmatic than what we hear is saudi public positions [sic].”

In an email to Washington Post columnist David Ignatius, Otaiba laid out his thinking clearly while thanking him for a column.

In an unusual move, Saudi Arabia even recently hired the UAE’s longtime public-relations firm, the Harbour Group, run by Otaiba’s friend Richard Mintz. Richard Clarke, most well known for his public apology to 9/11 victims for the intelligence failure, was brutal in his criticism of Saudi Arabia in the wake of the attack. An Otaiba friend, he is now chair of the MEI’s board and has personally lobbied Saudi Arabia for funding, walking out of the Saudi embassy with a $500,000 check. Michael Petruzzello, the longtime Washington hand for Saudi Arabia, is also on the MEI board.

Gulf countries that are family-run dynasties tend to produce the same kind of family rivalries seen the world over. In Abu Dhabi, Crown Prince Mohammed bin Zayed, Otaiba’s mentor and boss who is known as MBZ, has long detested Mohammed bin Nayef, who was in line for the Saudi throne, going so far as to publicly call him a monkey. MBZ and Otaiba saw MBS as the way to derail bin Nayef, and exert control over the larger country by elevating the junior prince.

The campaign worked and was largely cheered in Washington.

Scholars at the think tanks that are backed with Saudi and UAE money say they pride themselves on their ability to speak and write freely, and bristle at any suggestion that the funding corrupts the intellectual product.

That claim has always been dubious, but the next few days will put it to the test in a way it never has been tested before.