The transaction fits into the pattern of loans described in the indictment. 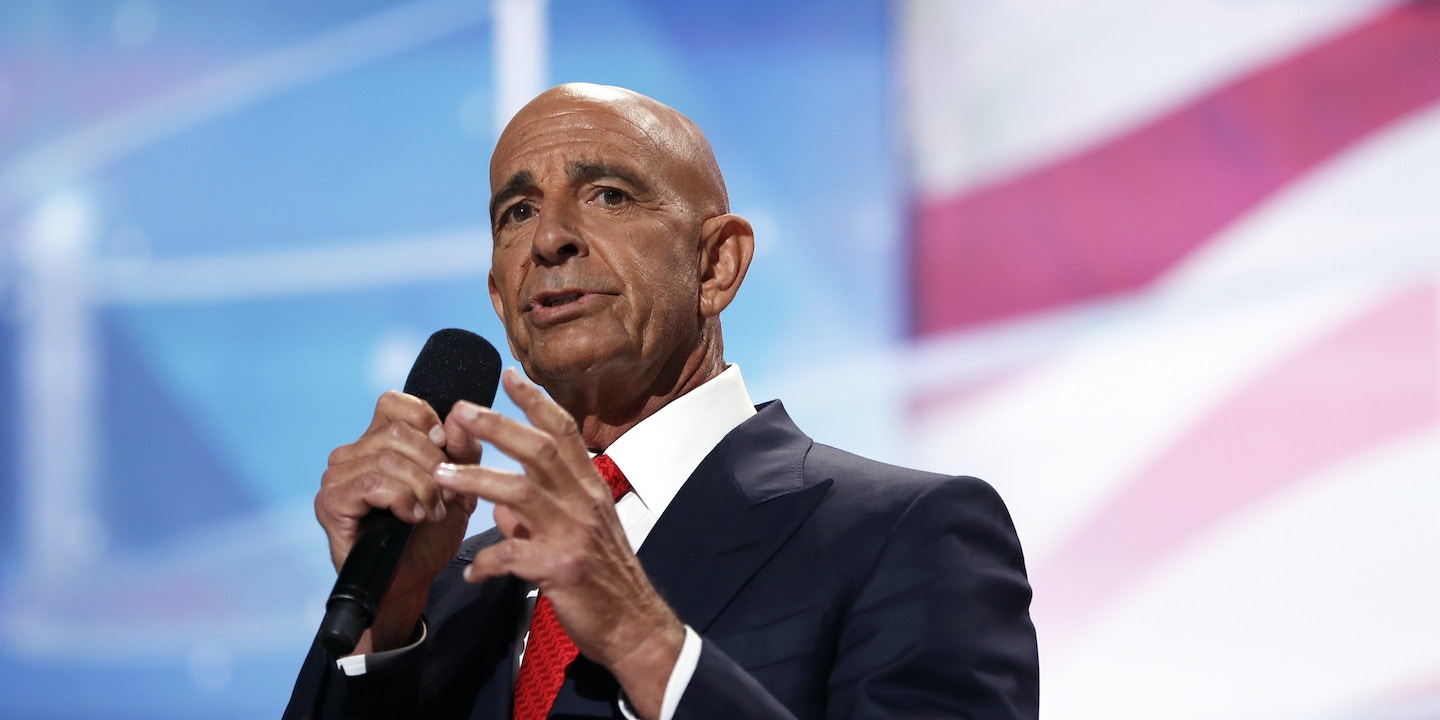 Tom Barrack, a top Donald Trump ally and CEO of private equity firm Colony Capital, made Paul Manafort a $1.5 loan in 2007, he told the Washington Post in an interview conducted before the former Trump campaign chair was indicted.

The interview takes on new significance now that Manafort has been charged with money laundering. Prosecutors in the indictment allege that Manafort’s criminal scheme began in at least 2006 and involved short-term loans tied to property.

Owen Blicksilver, a spokesperson for Barrack, told The Intercept that, in fact, the loan Barrack made was not to Manafort, as he’d told the Post, but to Manafort’s wife. He added that whatever tax-avoidance strategy Manafort may have been employing would not have been known to Barrack.

“Without opining on the validity of the charges in the indictment, do you really think someone making a personal loan reviews the individual’s tax filings?” Blicksilver said.

Indeed, Barrack could very well have been unaware of Manafort’s offshore activity. Barrack is one of Trump’s closest friends and confidants and speaks with Trump regularly. His name has been floated as a possible chief of staff should the president decide to replace John Kelly.

Barrack has been friends with Manafort for decades and was, in fact, one of the first people to recommend Manafort to Trump’s campaign. According to the New York Times, Barrack wrote a cover letter calling Manafort “the most experienced and lethal of managers” and “a killer.”

Manafort’s charges are mostly connected to overseas income he was allegedly sheltering from federal authorities using a network of offshore accounts in Cyprus. And, in what is likely an extraordinary, only-in-the-Trump-administration coincidence, prosecutors allege that most of the offshore accounts were tied to the Bank of Cyprus. Commerce Secretary Wilbur Ross was vice chair of that bank until he divested to join the administration.

Manafort used the accounts to purchase property in the U.S., then take out loans using the property as collateral. The loans would then become clean, untaxed cash.

But it required a lot of different loans. And 10 years ago, Barrack gave Manafort the $1.5 million loan to help refinance his mortgage for a home in the Hamptons. Manafort paid off the loan 14 months later, and Barrack told the Washington Post that the loan was the only financial transaction between them.

As the 2007 financial crisis pummeled many real estate investors, Barrack bought up discounted property or debt. He wound up holding part of the debt on a project controlled by Trump’s son-in-law, Jared Kushner, who had purchased a 41-story Fifth Avenue office tower at the height of the market and was having trouble making the loan payments. When Kushner tried to restructure his debt — meaning some investors would receive less than expected — he flew to California to get Barrack’s support. After Barrack talked with Trump about the matter, he went along with Kushner’s request.

Around the same time, Barrack helped Manafort, loaning Trump’s future campaign manager $1.5 million to refinance a home in the Hamptons. Barrack said the loan was repaid in 14 months and was the only financial transaction between the two.

The transaction could be entirely innocent and distinct from his alleged criminal scheme, but it fits into the pattern of loans described in Manafort’s indictment. Manafort sometimes used his offshore accounts to pay off mortgages and sometimes other loans. The indictment points to a cycle in which Manafort used newer mortgages to pay off older ones – the continuous loans gave him cash infusions while allowing him to evade the IRS. Manafort is also accused of telling an assortment of lies to get bank loans at more favorable interest rates so that when the loans had to be repaid, he wasn’t losing much of his offshore fortune.

The indictment even references a Hamptons home as one of the vehicles for alleged money laundering at around the same time. 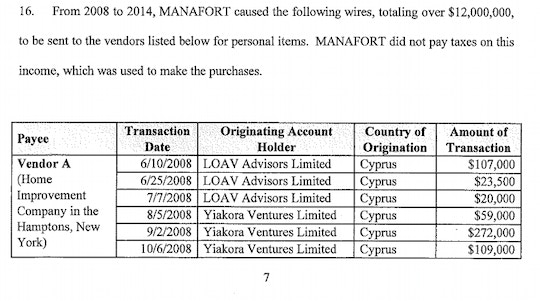 When asked about the property referenced in the indictment, Blicksilver said that “what you are suggesting is outrageous even if your facts were accurate, which they are not,” noting that the loan was repaid before June 2008, the first date in the table above.

After Manafort resigned from the Trump campaign amid scandal, Rick Gates – who has been described as Manafort’s righthand man — hung around. Earlier this year, he was ousted from his role at a pro-Trump super PAC that he helped found. He was immediately hired as a consultant by a company owned by Barrack. Last Monday, Gates was also indicted, and Barrack fired him.