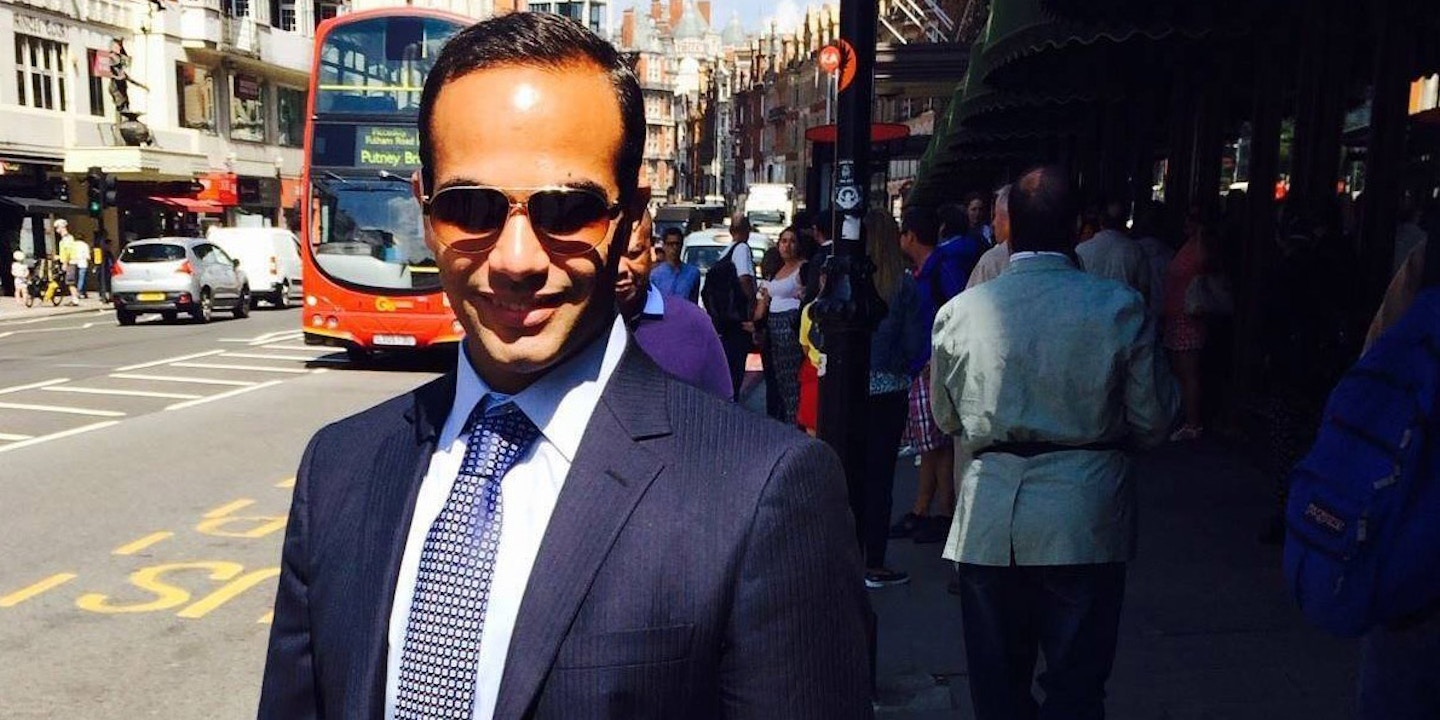 A former adviser to Donald Trump’s presidential campaign secretly pleaded guilty to lying to the FBI about his contacts with representatives of the Russian government during the campaign. According to court documents unsealed Monday, George Papadopoulos, a foreign policy adviser on Trump’s campaign, confessed to repeatedly attempting to set up meetings between individuals connected to the Russian government and Trump, including people who claimed to have “dirt” about presidential rival Hillary Clinton in the form of “thousands of emails.”

Since his arrest, the unsealed document said, he has been cooperating with federal investigators.

In interviews earlier this year with FBI agents investigating possible Russian interference in the 2016 election, Papadopoulos repeatedly lied about his activities. On July 27, he was arrested while arriving at Dulles International Airport. He pleaded guilty on October 5.

Papadopoulos first joined the campaign as an adviser in early March 2016. According to court documents, later that month, while traveling in Italy, he met a London-based professor who claimed to have connections to the Russian government. Shortly thereafter, that individual introduced him to a woman who claimed to be a relative of Vladimir Putin. She met with him in London. Papadopoulos reported back to the Trump campaign several times that he was working on building connections with Russian officials, stating at a meeting on the last day of March, attended by Trump, that he had connections that could “help arrange a meeting between then-candidate Trump and President Putin.”

Within a month, Papadopoulos was introduced to an individual claiming to be connected to the Russian Ministry of Foreign Affairs to try and set up such a meeting. On April 26, he met the professor at a London hotel, where he was informed about the “dirt”: “The Russians had emails of Clinton.” From here, Papadopoulos furiously communicated with Trump campaign officials to set up meetings between them and representatives of the Russian government. He thanked his contact for helping to make these connections, telling them that “it’s history-making if it happens.”

Roughly two months after their first meeting, in May 2016, Papadopoulos received a message from his contact that “I have just talked to my colleagues from the MFA. The[y] are open for cooperation.” Papadopoulos communicated this back to a “high-ranking campaign official” and continued to have discussions with members of the Trump campaign about Russia throughout the month.

A footnote in the government document sheds additional light on the discussions within the Trump camp at the time. After hearing about Russia’s entreaties for a Trump visit, one senior campaign official forwarded the note on May 21 to another and added, “We need someone to communicate that DT is not doing these trips. It should be someone low level in the campaign so as not to send any signal.”

The footnote has been flagged on social media as suspicious and, indeed, its appearance in the government document lends it that quality, but the explanation could also be a political one: The campaign did not want Trump visiting Russia during the election because the political signal it could send might not have been helpful. The question, then, is what would the goal of the trip be for the low-level staffer? Would the trip have been aimed at improving relations with Russia or colluding around the release of “dirt”? The outcome of Mueller’s investigation will hinge on such still-unanswered questions.

Wow. Read this section of the Papadopoulos charge, including the footnote. Someone “low level” has to visit Russia as to not send a signal. pic.twitter.com/Qz2c1zNQ6Y

According to the court filings, “From mid-June through mid-August 2016, PAPADOPOULOS pursued an ‘off the record’ meeting between one or more Campaign representatives and ‘members of president putin’s office and the mfa.'” After much back and forth about Trump or representatives of his campaign, on or about August 15, 2016, a “campaign supervisor” told Papadopoulos, “‘I would encourage you’ and another foreign policy adviser to the Campaign to ‘make the trip,’ if it is feasible,” according to court filings. According to the document, that trip ultimately did not take place.

If those efforts began in mid-June, that would place it after a much-discussed June 9 meeting between Donald Trump Jr., Paul Manafort, and Jared Kushner, representing the Trump campaign, and Russian lawyer Natalia Veselnitskaya, who had offered the Russian government’s help in the campaign. The lawyer promised information that “would incriminate Hillary and her dealings with Russia and would be very useful to your father,” according to an email sent to Trump Jr. “This is obviously very high level and sensitive information but is part of Russia and its government’s support for Mr. Trump.”

Trump’s son replied: “If it’s what you say, I love it, especially later in the summer.”

Veselnitskaya came to the meeting with talking points that mirrored ones the Russian government had provided to Rep. Dana Rohrabacher, R-Calif.

During interrogations with FBI investigators earlier this year, Papadopoulos repeatedly lied about the extent and nature of his activities and the timing of his contacts between Kremlin-connected individuals and the Trump campaign. He also deleted his Facebook account and opened a new one, in what appeared to be an ill-fated effort to conceal past communications.

The new revelations puts Attorney General Jeff Sessions in Mueller’s spotlight. Sessions has made repeated claims that he had no knowledge of collusion with the Russian government and never knew anything about Russian hacking into the emails of the Democratic National Committee nor campaign chair John Podesta.

Sessions has already been forced to revise what he called misstatements, having denied meeting with Russian officials only to later acknowledge such meetings took place. Sessions met at least twice with then-Russian Ambassador Sergey Kislyak, initially claiming that the discussion only focused on foreign policy. It later emerged that Kislyak said the opposite in a memo to his superiors back home, telling Moscow he had talked about the campaign with Sessions.

Earlier this month, Sessions appeared again before the Senate Judiciary Committee and denied any improper conduct. “Let me just say this, without hesitation, that I conducted no improper discussions with Russians at any time regarding a campaign or any other item facing this country,” he said.

Mueller’s ability to make his case — if there is one to make — will be strengthened by two other arrests made Monday, that of Manafort and his associate Rick Gates.

Manafort is a long-time D.C. consultant, having begun his career advising Gerald Ford’s re-election campaign in 1976. He since served as a lobbyist and international gun-for-hire, developing close ties with a number of severe human rights violators. Manafort has advised Mobutu Sese Seko, the longtime military dictator of the Democratic Republic of Congo, and Ferdinand Marcos, a famously corrupt dictator of the Philippines.

But Manafort’s most infamous relationship is with Ukrainian strongman Viktor Yanukovych, a pro-Russian politician who was removed during an uprising in 2014. According to Mueller’s indictment, Manafort ran a “multi-million dollar” lobbying campaign for Yanokovich from 2006 to 2014, involving two D.C. law firms, all while illegally concealing that he was acting on behalf of a foreign government.

Under the Foreign Agents Registration Act, people who are paid to represent foreign governments must register and publicly disclose sources of income.

In addition, the indictment says that Manafort laundered more than $18 million through shell companies in Cyprus, avoiding paying taxes on the money while he used it to buy expensive clothing and cars. In July, the New York Times reported that shell companies connected to Manafort owed Russian interests more than $17 million dollars – a clear red flag that someone could be pressured by a foreign government.

In 2006, Manafort bought an apartment on the 43rd floor of Trump tower through a company he controlled. He lived in the tower since and transferred it to his name in 2015.

In 2016, Manafort was initially hired — for free — by Trump to help wrangle delegates for the Republican convention — a job he once did for Ford. But he effectively became campaign manager in June of 2016, after Trump fired Corey Lewandowski. Manafort’s rise to prominence in the campaign attracted suspicion from many commentators, who saw his ascent as a sign of Trump’s affinity for overseas strongmen. He stepped down after it emerged he had been the recipient of $12 million in off-the-books payments.