Sen. Ben Cardin, D-Md., said constituents have recently been asking, “Can the president really order a nuclear attack without any controls?” at town halls. 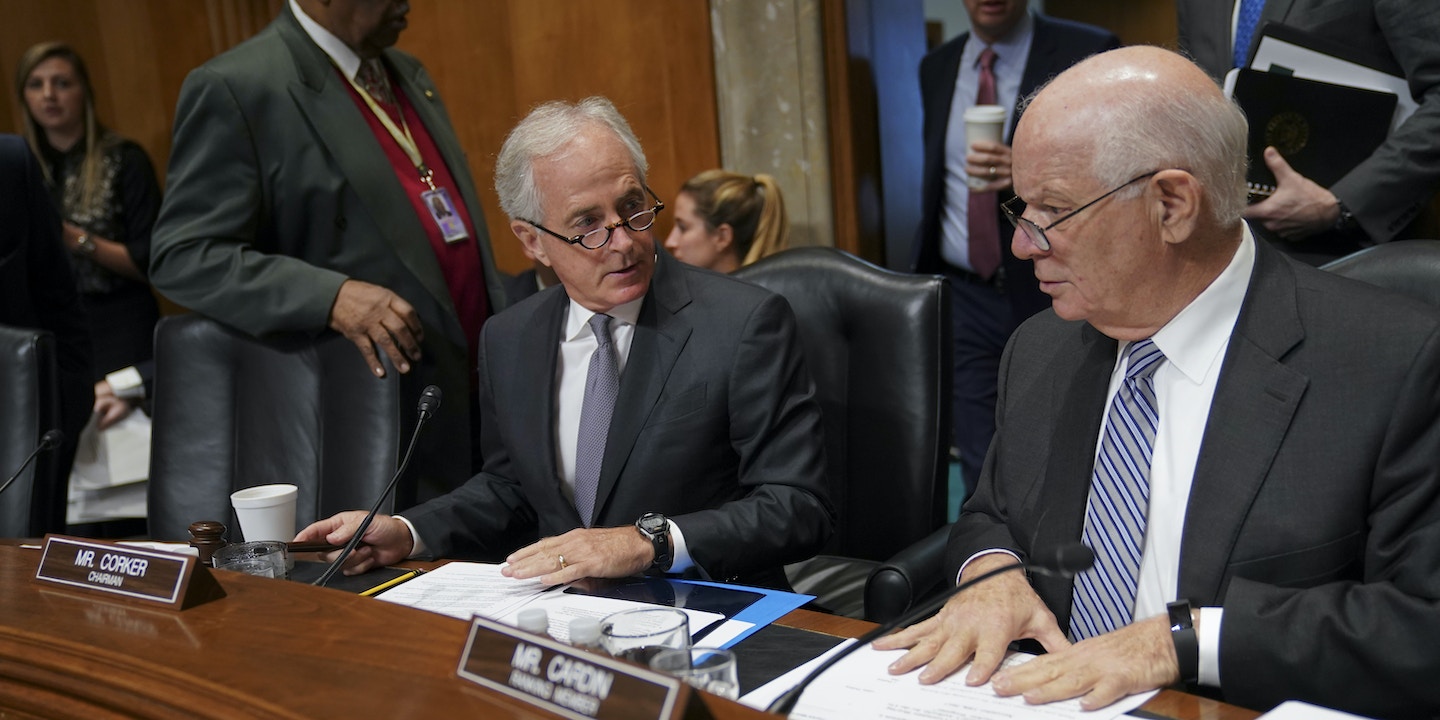 At his town hall meetings, Maryland Sen. Ben Cardin, despite being the highest-ranking Democrat on the Foreign Relations Committee, typically gets questions that are close to home. But lately, the question on people’s minds has turned more existential, perhaps the closest to home of all. People want to know, he said at a hearing on Tuesday, “Can the president really order a nuclear attack without any controls?”

The committee’s chair, Sen. Bob Corker, R-Tenn., meanwhile, has gone on record referring to the White House as an “adult day care center,” where aides do their best to minimize the day-to-day damage that can be done by the man-child in their care.

So it stands to reason that for the first time since 1976, the committee on Tuesday held a hearing on the president’s authority to launch a nuclear attack. The hearing comes amid Democrats’ bubbling anxiety over President Donald Trump’s Twitter feud with North Korea’s Kim Jong-un and fixation on America’s military might. Corker, for his part, said the confab, of course, had nothing to do with Trump, insisting that members of Congress have long wanted to discuss the issue.

But nothing, as they say, focuses the mind quite like the sight of the nuclear gallows.

My first order as President was to renovate and modernize our nuclear arsenal. It is now far stronger and more powerful than ever before....

The president has the sole authority to decide whether to use nuclear weapons, an arsenal consisting of 4,571 warheads as of September 2015. There are no legal or political restraints on the president’s power to order a nuclear strike: The president is not required to consult with anyone beforehand, and the Defense Department, Congress, and the judicial branch have no way of blocking an order once it happens.

Other countries with nuclear capabilities have adopted models that don’t give the executive unilateral authority. India and Pakistan have both established councils to authorize the use of nuclear weapons, and Russia gives the president, defense minister, and chief of general staff access to the nuclear codes, according to the Union of Concerned Scientists.

The senators questioned retired Air Force Gen. C. Robert Kehler, Duke University professor Peter Feaver, and former Acting Under Secretary for Policy at the Department of Defense Brian McKeon about the process by which a president can order a nuclear attack. Lawmakers on both sides of the aisle expressed concerns about the president’s unilateral authority to launch an attack, although Republicans refrained from referencing Trump by name.

Democratic lawmakers have been voicing concerns over Trump’s authority to wage nuclear war and his incessant Twitter fights, saying he doesn’t understand the consequences of a preemptive strike on North Korea.

“We are concerned that the president of the United States is so unstable, is so volatile, has a decision-making process that is so quixotic, that he might order a nuclear weapons strike that is wildly out of step with U.S. national security interests,” Sen. Chris Murphy, D-Conn., said at the hearing.

Similarly, Sen. Jeanne Shaheen, D-N.H., said if the United States were ever threatened and the president had to act, she would want Trump “to act in a way that acknowledges input from a lot of experts, and not to act based on a Twitter post.” Trump’s behavior “contributes to the concern about whether we’re in a situation where we need to look at, in Congress, a first-nuclear strike policy and banning that,” she added.

These concerns are not new. In January, Sen. Ed Markey, D-Mass., and Rep. Ted Lieu, D-Calif., introduced S.200 and H.R. 669, the Restricting First Use of Nuclear Weapons Act of 2017, to prohibit the president from launching a nuclear strike without a declaration of war by Congress.

Kehler, the former head of U.S. Strategic Command, on Tuesday said the U.S. military is “obligated” to prevent Trump from launching a nuclear strike against North Korea if it deems the order to be illegal.

But Kehler admitted it’s unclear how the military would determine if an order is illegal. If he were in a position in which he had questions about the legality of an order from the president, he would say “I have a question about this” and “I’m not ready to proceed,” he told the senators.

The public’s concern, Cardin said, has been fueled by Trump’s comments on North Korea. Trump threatened in August to unleash “fire and fury like the world has never seen” against North Korea, when he spoke to reporters at his golf club in New Jersey.

“Now, many interpret that to mean that the president is actively considering the use of nuclear weapons in order to deal with the threat of North Korea,” Cardin said. “That is frightening.”

On Sunday, Trump again lashed out against the North Korean leader, who issued a statement referring to Trump as a “dotard,” which means “very old person.”

“Why would Kim Jong-un insult me by calling me “old,” when I would NEVER call him “short and fat?” Oh well, I try so hard to be his friend – and maybe someday that will happen!” Trump tweeted in response.

Corker last month called Trump’s threats toward other countries reckless, saying they could set the U.S. “on the path to World War III.” But he and other Senate Republicans didn’t reference Trump or any of his statements on North Korea on Tuesday, insisting that the hearing was a part of the “normal process.”

“This hearing is something that committee members have asked for, and you haven’t had one for 41 years,” Corker told reporters after the hearing. “Again, for anybody to think these hearings are taking place over any specific individual, it’s really about the condition we find ourselves in the world. … I think we’ll continue to look at this issue because you know it is a sober issue at a time when we have someone in North Korea who’s advancing their abilities in this regard.”

Corker said he doesn’t have plans for any legislative fixes yet and that the committee should see if there are additional hearings or processes “we ought to look at,” adding “I don’t wanna walk out of a hearing and say that I’ve come to some formal conclusion.”

Even without unleashing America’s nuclear capabilities, Trump has overseen a U.S. military that killed more civilians in Syria and Iraq in seven months than it did in three years under former President Barack Obama, according to the monitoring group AirWars. The Trump administration is also considering loosening Obama-era regulations on drone strikes and commando raids.