In a poetic finale, Republicans hope to gut the Affordable Care Act and pass corporate tax cuts by also opening up the Alaska National Wildlife Refuge to drilling. Senate Republicans plan to use the prospect of drilling for oil in the Alaska National Wildlife Refuge to get the votes needed for major corporate tax cuts and a repeal of the individual mandate, one of the key components of the Affordable Care Act.

On Tuesday night, Senate Republicans released the latest version of their tax plan and included in it a repeal of Obamacare’s individual mandate, which is the requirement that everybody who can afford to buy health insurance must do so or pay a fine. Repealing it would result in significantly higher premiums, as some healthy people would elect to forego coverage until the moment it was needed.

Drilling in ANWR has been one of Sen. Lisa Murkowski’s longtime priorities, as it was for her father, Frank Murkowski, a giant of Alaska politics. While the elder Murkowski was never able to make the drilling dream a reality, it is now within reach.

On Wednesday, the Energy and Natural Resources Committee, which Murkowski chairs, passed a bill to allow drilling by a 13-10 vote, with Sen. Joe Manchin, D-W.Va., voting in favor, alongside every Republican.

That bill was in response to what are known as budget reconciliation instructions, a Senate maneuver that allows legislation to go through the full Senate with a bare majority and not be subject to a filibuster. That means Murkowski’s ANWR bill can now be included in the broader tax package being finalized by Senate Republicans.

Murkowski was effectively named an honorary member of “the resistance” — those opposed to President Donald Trump’s agenda — earlier this year when she twice held strong against Republican efforts to pressure her to support a repeal of the Affordable Care Act. In a conversation with outgoing office interns, she described her stand on that bill as one of the most important things she’d done as a senator.

For all senators, but particularly for those from Alaska, detached as it is from the “lower 48,” home-state priorities almost always trump national ones. Murkowski has also been one of the few Republicans to acknowledge the reality of climate change — but not so much that it would get in the way of more drilling in Alaska. 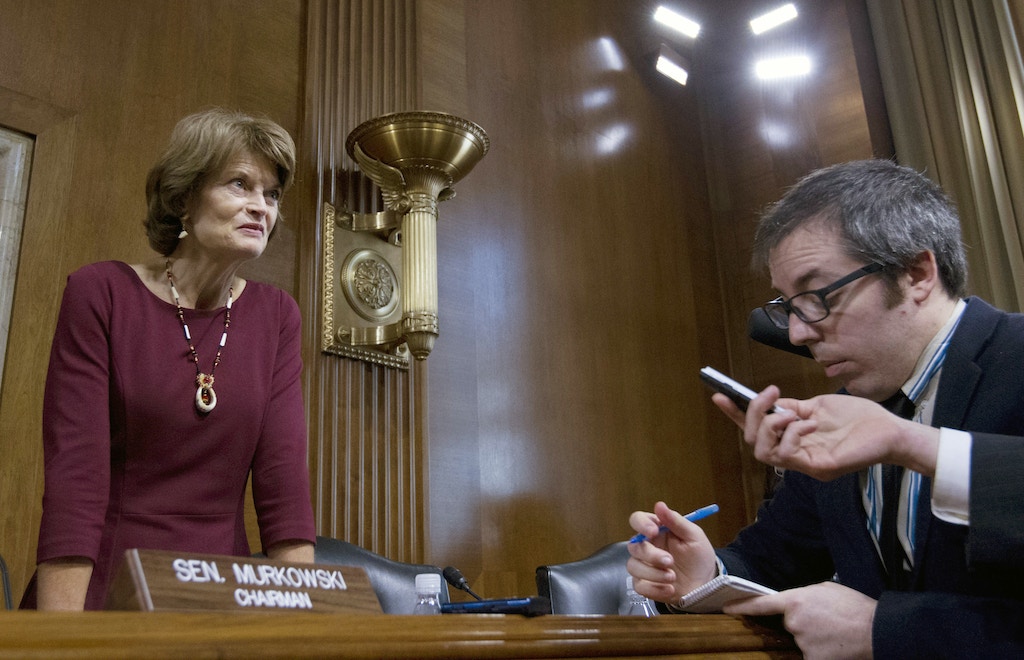 Senate Energy and Natural Resources Committee Chair Sen. Lisa Murkowski, R-Alaska, speaks with reporters after the Energy and Natural Resources Committee hearing on Capitol Hill in Washington, Wednesday, Nov. 15, 2017, to consider, pursuant to H.Con.Res.71, the Concurrent Resolution on the Budget for FY 2018, reconciliation legislation to authorize the Secretary of the Interior to establish and administer a competitive oil and gas program in the non-wilderness portion of the Arctic National Wildlife Refuge, known as the “1002 Area” or Coastal Plain.

Sen. Maria Cantwell, D-Wash., the top-ranking Democrat on the committee, warned that opening the area for drilling would cause irreparable harm. “Adding oil and gas development as a purpose of the Arctic National Wildlife Refuge doesn’t make any sense for a wildlife refuge – it certainly does if you want to drill, but no other national wildlife refuge lists oil and gas development as a purpose of a wildlife refuge,” she said at the hearing, arguing that scientists “say it can’t coexist. … I know people would like to say that these caribou or polar bears want to cozy up to a pipeline, but that is just not true.”

The state has a permanent fund that is fueled by resource extraction, which cuts an annual check to state residents, so Alaskans are quite literally bought into the fossil fuel industry.

The Intercept asked Murkowski on Wednesday whether she would be able to support a tax bill that included a repeal of the individual mandate, which would drive up insurance premiums and greatly increase the number of uninsured. Her answer, in pivoting immediately to ANWR, was instructive.

“My whole focus this week, you’re going to be shocked to know, has been ANWR. Today, I’m not carrying a 12-pound binder. I’m able to unload that for a couple of days,” she said, referring literally to the stacks of paper she’d been hauling around as she worked on passing the drilling bill, but perhaps also metaphorically to the ANWR baggage she’s been dragging around since inheriting the issue from her father. “Now we can look to what’s happening with the rest of the tax package.”

Murkowski had been joined in opposition to health care repeal by Sen. Susan Collins, R-Maine, and Sen. John McCain, R-Ariz., leaving the GOP just one vote short. Collins, for her part, said she has yet to decide how to vote on the broad package, but appeared to be leaning against it when talking to reporters Wednesday. “I think it greatly complicates our efforts to combine tax reform and changes in the ACA, particularly taking an isolated provision,” she said.

But without Murkowski, it might not matter how Collins votes.

Republican leaders may have other problems, however, as Sens. Bob Corker, R-Tenn., and Jeff Flake, R-Ariz., have made noises about opposing a tax bill that adds significantly to the deficit, while Sen. Ron Johnson, R-Wisc., has problems with its manufacturing impacts. (Johnson says he will oppose it without major changes.)

And if they don’t pass the bill ahead of Alabama’s December 12 special election for a Senate seat, they may have Democrat Doug Jones to worry about as well.

Top photo: Caribou at the Arctic National Wildlife Refuge on June 18, 2017 in Alaska.