As the Al Franken News Broke, His Friends in the Senate Had No Clue How to Respond

No comments became statements, as a short apology became a long apology. 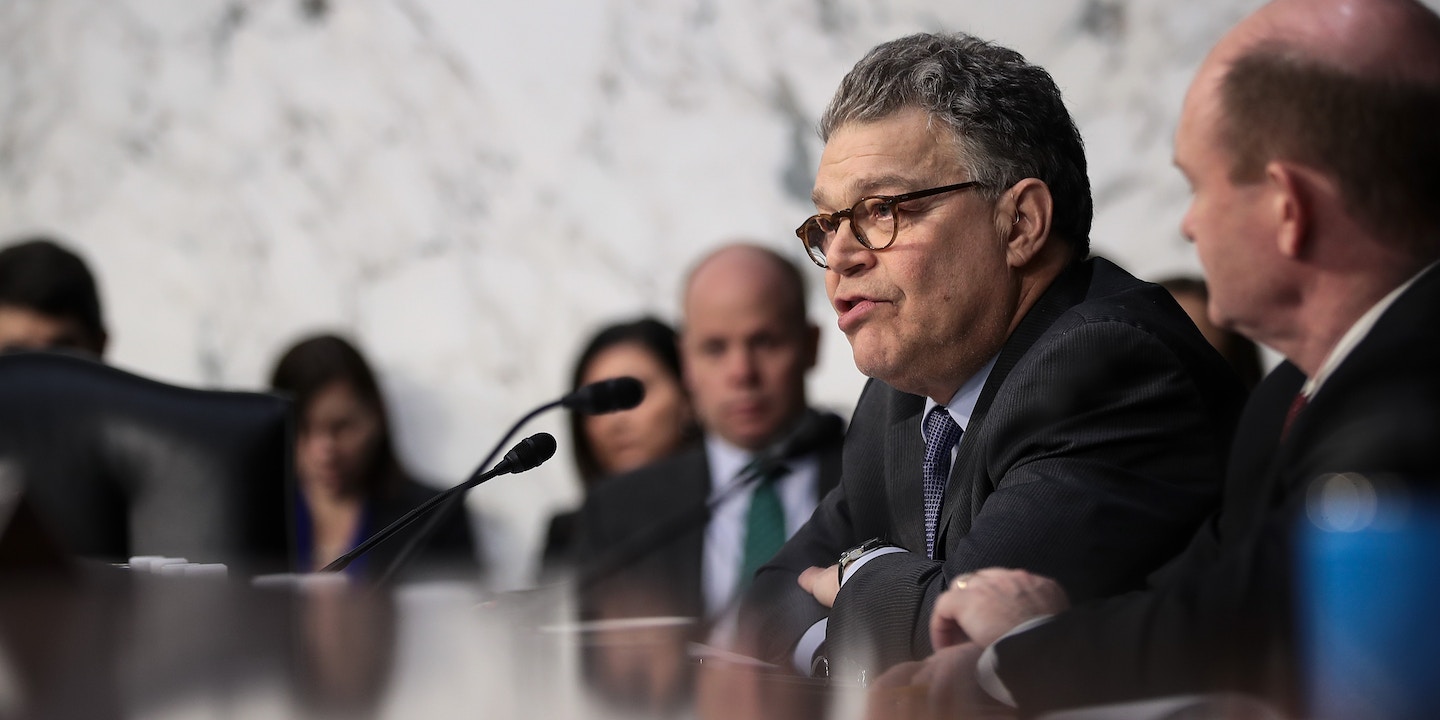 Senators in the Capitol were stunned into rare speechlessness by the wave of Weinstein-esque allegations finally crashing down on a member of the august body that dubs itself the most exclusive club in the world.

A radio news anchor said Thursday that Minnesota Democratic Sen. Al Franken groped and “forcibly kissed” her during an overseas USO tour two years before Franken was elected to the Senate. The accuser, Leeann Tweeden, published her firsthand account to her station’s website, 790 KABC in Los Angeles, including a damning photo.

Dozens of senators routinely eager to speak to the horde of reporters in the Capitol struggled to get their bearings, with a curiously high number of them suddenly getting urgent phone calls just as reporters approached. “I just heard the allegations, I’d like to hear it from Al,” said Sen. Joe Manchin, D-W.Va., shortly after the news broke.

California Sen. Dianne Feinstein similarly said she didn’t “know anything about it,” adding “I’ve learned, don’t comment before you know what you’re commenting on.”

The caution was bipartisan. “Just barely saw it, so no reaction,” shot Sen. Jeff Flake, R-Ariz., who recently denounced President Donald Trump while announcing his retirement.

“I receive these kinds of questions every day about all kinds of things and I just — I don’t really have a lot — I don’t know enough,” Sen. Bob Corker, R-Tenn., said. “I just, again, I just don’t want to be weighing in on these things every day when I know nothing about them.”

But when a reporter pointed out that he had weighed in on the Roy Moore scandal, Corker asked, “How did I weigh in on Roy Moore?”

Look, I'm sorry, but even before these reports surfaced, Roy Moore's nomination was a bridge too far.

Senate Democrats abruptly postponed a 12:30 p.m. press conference, and Franken didn’t appear for any of the day’s votes. He began with a short apology that said he remembered the encounter with Tweeden differently than she did, calling the photo an attempt at a bad joke. Not long after, he issued a much lengthier apology, this time requesting an ethics committee investigation into his own case.

“The first thing I want to do is apologize: to Leeann, to everyone else who was part of that tour, to everyone who has worked for me, to everyone I represent, and to everyone who counts on me to be an ally and supporter and champion of women,” Franken wrote in his second apology. “I respect women. I don’t respect men who don’t. And the fact that my own actions have given people a good reason to doubt that makes me feel ashamed.”

Both Sens. Jeanne Shaheen, D-N.H., and Brian Schatz, D-Hawaii, said that as members of the Senate Ethics Committee, they were unable to comment.

With Franken already on record for an ethics probe, his fellow Democrats had permission to call for an investigation. As the day wore on, there were fewer senators who avoided questions about the revelations and more who forcefully condemned the behavior, demanding the Senate Ethics Committee review the allegations.

There were certainly those who, despite their proximity to Franken, weighed in forcefully without hesitation. Sen. Tammy Duckworth, D-Ill., was one of them. “I think that women should be able to feel safe and free in their workplace and that if there are such allegations they should come forward,” Duckworth said. “I have every reason to believe Ms. Tweeden’s account.”