Under the GOP Tax Plan, Top Republican Orrin Hatch’s Own American Dream Would Have Been Out of Reach 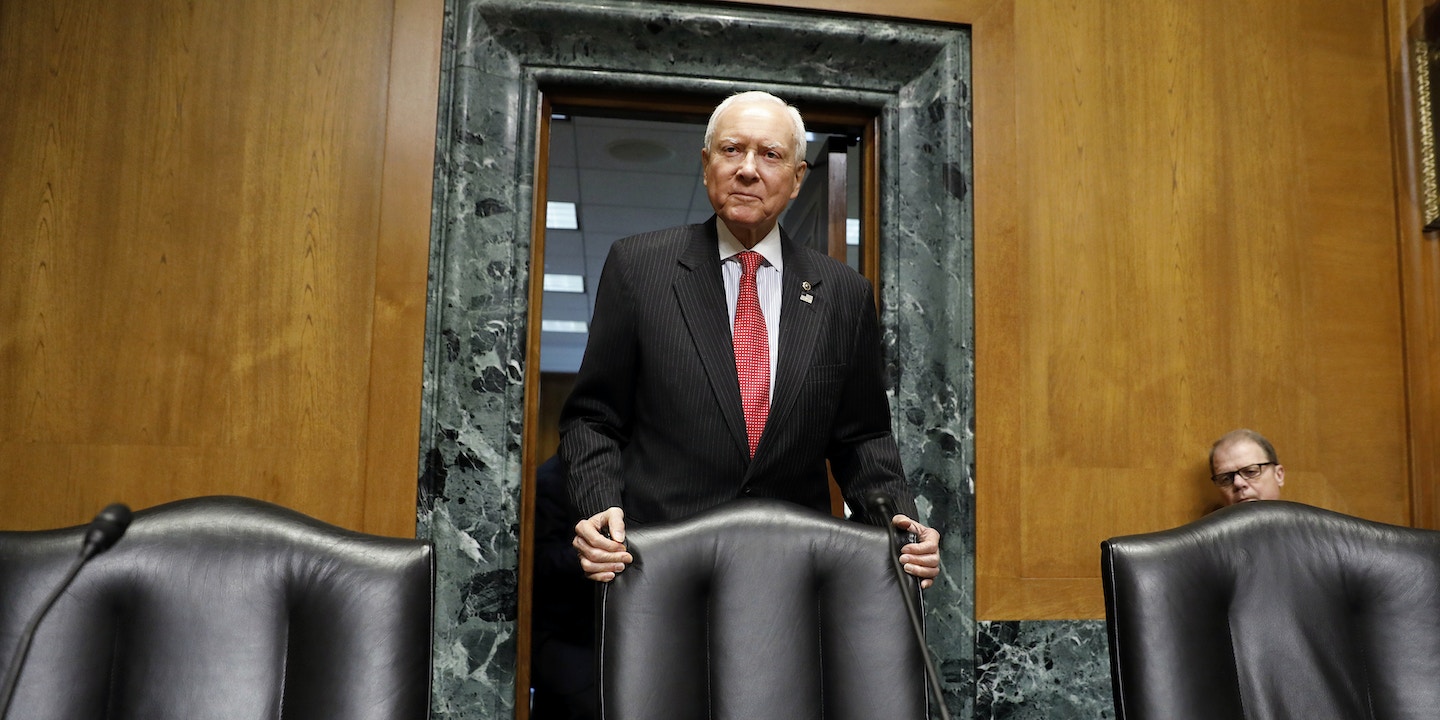 Orrin Hatch came from nothing, and he made it.

In office for 40 years, he’s president pro tempore of the Senate and chairs the powerful committee writing the Senate GOP’s tax plan. He’s using that perch, he explained last week, so that everybody can have the same chance he did.

As the Senate put the finishing touches on its tax bill in his Finance Committee last week, Hatch got into it with Ohio Democratic Sen. Sherrod Brown, who was lambasting the bill as a giveaway for the rich.

“I come from the poor people. And I’ve been here working my whole entire stinkin’ career for people who don’t have a chance. And I really resent anyone saying that I’m just doing this for the rich. Gimme a break,” Hatch told Brown. “I come from the lower middle class originally. We didn’t have anything. So don’t spew that stuff on me. I get a little tired of that crap.”

Hatch, satisfied with the exchange, shared a video of it on social media, adding a few narrative details.

I grew up in a shack with a Meadow Gold Dairy sign for a wall. I worked as a janitor to pay for law school. I believe in opportunity because I’ve lived it.

And that’s what we’re going to deliver with #TaxReform. pic.twitter.com/D4VUj3lwls #utpol

The Senate has yet to approve its own version of tax reform, but the bill that emerged from the House of Representatives has a provision that would have had a younger Hatch howling in protest. The bill requires graduate students who get tuition waivers to pay taxes on the forgiven fees as if they were ordinary income.

Hatch went to to the University of Pittsburgh Law School on a scholarship when tuition there ranged from $1,100 to $1,300 per year.

The bottom tax rate in 1960 was 20 percent, which would have put Hatch’s tax bill at around $780 for the waiver. In an interview with the local Utah press in 2015, the senator described his ordeal, which at the time was tax-free. “It was a blessing to me that I had that honors scholarship. I could have never gone to law school. I mean, we had three kids and were living in a chicken coop and hardly able to get by. And at BYU I was a janitor,” he said.

Had Hatch been required to pay that additional $780, he may never have made it through law school, unless he had saved up a true fortune during his time as a janitor paying his way through Brigham Young University.

But that’s far from the only way in which privileges and advantages invisible to Hatch enabled his rise. Because of inflation, the school’s $1,300 tuition translates to roughly $11,000 today in what is called purchasing power, but it no longer has the power to purchase the same thing: The law school’s tuition is now listed at $38,500. If the school forgives any of that, the tax man could come for the student. (If the final GOP bill attempts to distinguish between honors scholarships and other types, schools are likely to simply rename all of them, meaning Republicans will either have to tax all waivers or none.)

Higher tuition rates mean greater student loans, something Hatch didn’t have to worry about as he went about starting his career. The House bill, meanwhile, also does away with the ability to deduct student loan interest payments from federal taxes.

Not everyone can get as lucky as Hatch did, either, when it comes to how he got his scholarship. Let Hatch tell the tale:

After I took [the LSAT exam], it was in the cathedral of learning at the University of Pittsburgh, I thought, “Well I’ll go up to the 14th, 15th floor and apply for law school there.” So I went up there and the registrar’s door was locked. So I was standing there looking kind of mournful I guess, and a chubby person comes around the corner and says, “Hey, can I help you?”

And I said, “Well I don’t think so.” I said, “I wanted to apply to the law school and it looks like the registrar’s door is locked.”

He said, “I can help you; I’m a professor here.” He opened the door, he gave me the papers, and he said, “We want you here.”

When I told him I was from Brigham Young University, he said, “You’re a Mormon?”

He said, “Oh my gosh.” He said, “I went to Arizona State Law School. Those Mormons were the toughest competition we had.”

And he said, “Why don’t you apply for a scholarship?”

I said, “Well, I don’t think I have good enough grades to really do it.”

He said, “Oh, I’m on the scholarship committee.”

And that must have been the sloppiest scholarship application in history at the University of Pittsburgh.

And two weeks later I received a full honor’s scholarship and had it all the way through law school. It was a blessing to me that I had that honors scholarship. I could have never gone to law school. I mean, we had three kids and were living in a chicken coop and hardly able to get by. And at BYU I was a janitor.

Hatch, however, may not entirely have forgotten the class lessons he learned swabbing those BYU halls. Neither the student loan nor the tuition provision that the House passed are in the Senate tax plan that came through Hatch’s committee. If it gets through the full Senate, Hatch is likely to get a seat on the conference committee, where he’ll have one more chance in his stinkin’ career to fight for people who don’t have a chance.

If the provision does become law, it probably won’t be retroactive. That’s a good thing for Hatch: With interest and fees, the bill for his unpaid tuition taxes from 1962 could easily climb north of $100,000.

Sign up to get Ryan Grim’s newsletter in your inbox.