The Politics of Climate Change Need to Be Anti-Elitist

Painting corporate and climate interests as synonymous helps make the right’s case that only elites have the luxury to care about climate change. 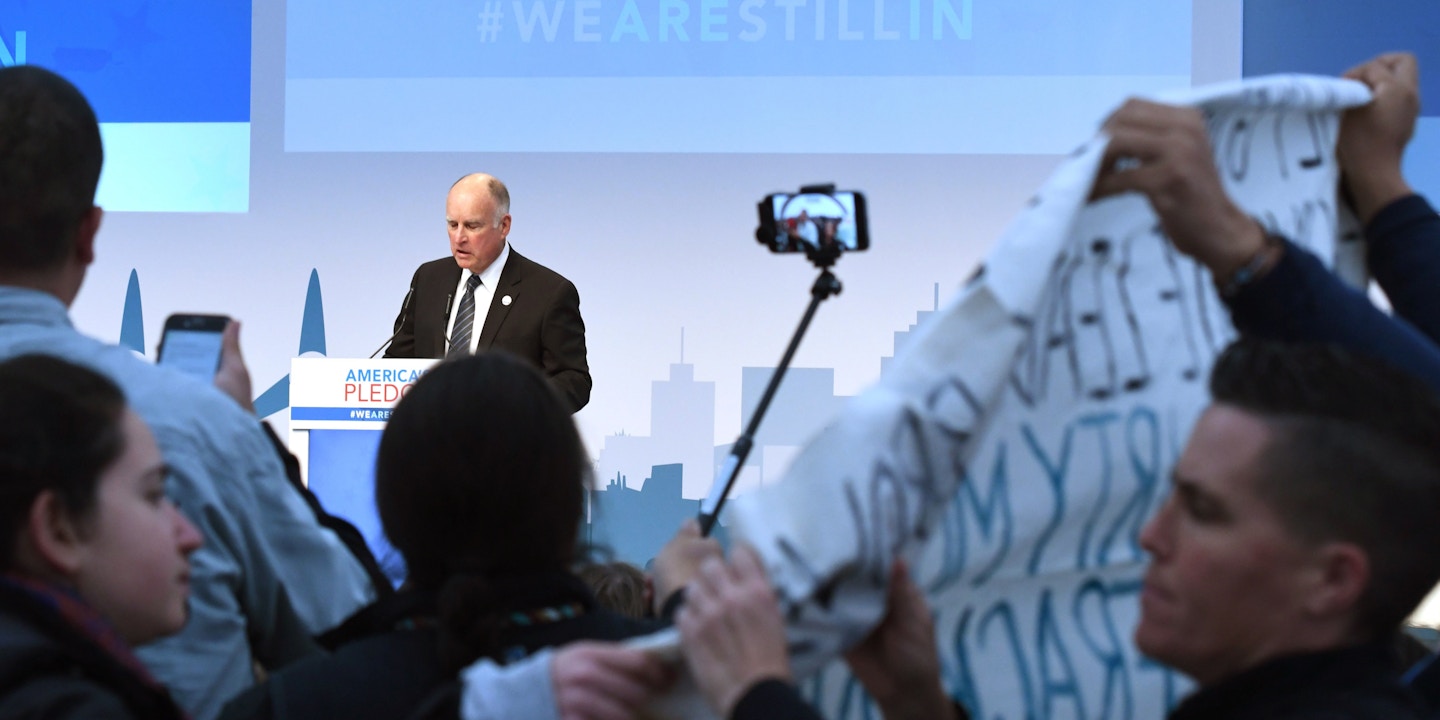 In the background of every United Nations Climate Change Conference in recent years, populists on the right have made some sort of political gain. While the 2015 talks that produced the Paris Climate Agreement were ongoing, the Front National — France’s freshly rebranded far-right party, led by Marine Le Pen — swept the first round of regional elections (though they did much worse in the second round). Days into COP22 last year, Donald Trump was elected U.S. president, sending shockwaves through the Marrakech convention center where the talks were held. And days after COP23 concluded in Bonn two weeks ago, German Chancellor Angela Merkel’s shaky negotiations to form a government collapsed, leaving many to question whether Germany’s xenophobic Alternative for Deutschland — now the country’s third-largest party — could further entrench gains in another election.

Unsurprisingly, much of the right-wing populism sweeping the West also happens to deny the existence of climate change, from the Trump administration — which used this year’s climate talks as an opportunity to boost fossil fuels — to the European Institute for Climate and Energy, or EIKE, a group of self-described climate skeptics who see hope in the AfD’s positions on the environment. EIKE held a conference in Düsseldorf, not far from Bonn, in the first week of COP23 where attendees toasted Trump’s decision to withdraw from the Paris Agreement.

Still, there was a quieter kind of denial on display in Western Germany — this time from so-called climate champions whose elitism makes it near impossible to effectively combat climate change.

It was more subtle, emergent from a shadow governmental delegation gathered under the banner “We Are Still In,” both a slogan and an umbrella organization. Comprised of businesses, NGOs, and elected officials in state and local governments from both sides of the aisle, the loose coalition was housed at COP23 in a multimillion-dollar, igloo-like structure outside of the two main event spaces, flanked with free food and drinks on the dime of billionaires like Michael Bloomberg, whose latest book “Climate of Hope” was handed out alongside complimentary espresso drinks. The group is optimistic that — working together — local governments and major corporations in the United States can more than meet the reductions goal America agreed to in Paris in 2015. Some of the world’s biggest banks and corporations — including Walmart, Mars, Bank of America — had a platform to discuss their shared commitment to sustainability at events in the tent. The effort’s main spokespeople — elites like Bloomberg and California Gov. Jerry Brown — are uniformly optimistic about the planet’s prospects in the age of Trump and the role carbon-intensive industries can play in keeping us safe.

There’s a good case to be made that this kind of logic — that major polluters will eventually come around on climate — is bad science. The Global Carbon Budget released during the talks’ second week estimates that global emissions will rise this year for the first time in several years. The cause, the study’s authors explain, is that emissions reductions in the United States and other developed nations have failed to compensate for rising emissions from developing nations, which have experienced a recent surge in economic growth — much of it with the help of fossil fuels. Just 100 companies have been responsible for 77 percent of warming since the mid-’80s, many of which — namely coal, oil, and gas corporations — have business models that are structurally dependent on the continued extraction and burning of the very fossil fuels that are fast making the planet uninhabitable. Much as they might talk up investments in clean coal or token renewables projects, they won’t walk willingly into a low-carbon future. Properly administered, a global carbon budget would liquidate the fossil fuel industry wholesale along a rapid timeline, ideally through some sort of managed transition.

In today’s political landscape, though, Bloomberg and Brown’s denial has at least as much to do with politics as with physical science.

The common threads linking the West’s disparate and ascendant right populism aren’t too hard to parse: xenophobia, an aversion to so-called globalism, and a sense of loss rooted — for the most part — in the real or imagined economic fears of an increasingly precarious middle class. Populists on the right have some common ground with those on the left, especially when it comes to a rejection of the elites. Trump is an elite, of course, but as a candidate, he cast himself as the ultimate outsider, a straight-talking businessperson who would drain the swamp of career politicians. While Sen. Bernie Sanders, I-Vt., and U.K. Labour leader Jeremy Corbyn have taken aim at Wall Street and rising inequality, Trump and Le Pen have targeted globalists and scapegoated immigrants.

In such a context, having some of the most visible faces of the climate fight be a handful of Davos-frequenting 1-percenters — almost universally housed in coastal cities — presents some obvious challenges.

The first is that any reasonable path toward curbing climate change will require state power, and the Third Way politics of consummate insiders like Brown and Bloomberg aren’t likely to inspire voters either at the local or national level, where Sanders remains America’s most popular politician. Projects to transform America’s energy grid, fortify cities against rising tides, and invest in early-stage research into issues like negative emissions technologies don’t lend themselves to a profit motive. If such massive changes are to happen, the initiative is much more likely to come from the public sector, not a handful of benevolent CEOs. And given the federal government’s refusal to confront climate change, funds won’t be unlocked unless progressives and bona fide leftists make successful bids for office up and down the ballot.

Painting corporate and climate interests as synonymous helps make the right’s case that climate is an issue only elites have the luxury to care about. The pitch given at the U.S. Climate Action tent in Bonn was that sustainability makes sense to corporate bottom lines. But what about those of everyday Americans who could find themselves on the losing end of de-carbonization? Scant reference was made in Bonn of how to ensure extractive workers aren’t left behind in the transition, or how to guarantee a carbon tax doesn’t simply get passed down to consumers.

Climate change uniquely lends itself to an anti-elite narrative: A handful of industries have gotten us into this challenge for the benefit of a few corporate executives. The solution could form the basis for the biggest jobs program America has ever seen. As voters on both sides of the Atlantic rebel against elites’ control over politics, why risk letting a slightly greener set of elites set the terms of the debate over the greatest threat humanity has ever faced?

There’s something inspiring about the assertion that “We Are Still In,” and plenty of good will come from collecting commitments to that effect from local governments and even corporations. But if they’re going to make any real headway, climate politics need to be anti-elitist politics, where neither Bloomberg or Brown are front and center.

Top photo: Protesters show banners and protest during the speech of California Gov. Jerry Brown at the launch event at the U.S. Climate Action Center on Nov. 11, 2017 during the COP23 United Nations Climate Change Conference in Bonn, Germany.