There’s a dangerous confluence of the notion of punishing suspects’ innocent families and the unaccountability of the CIA. 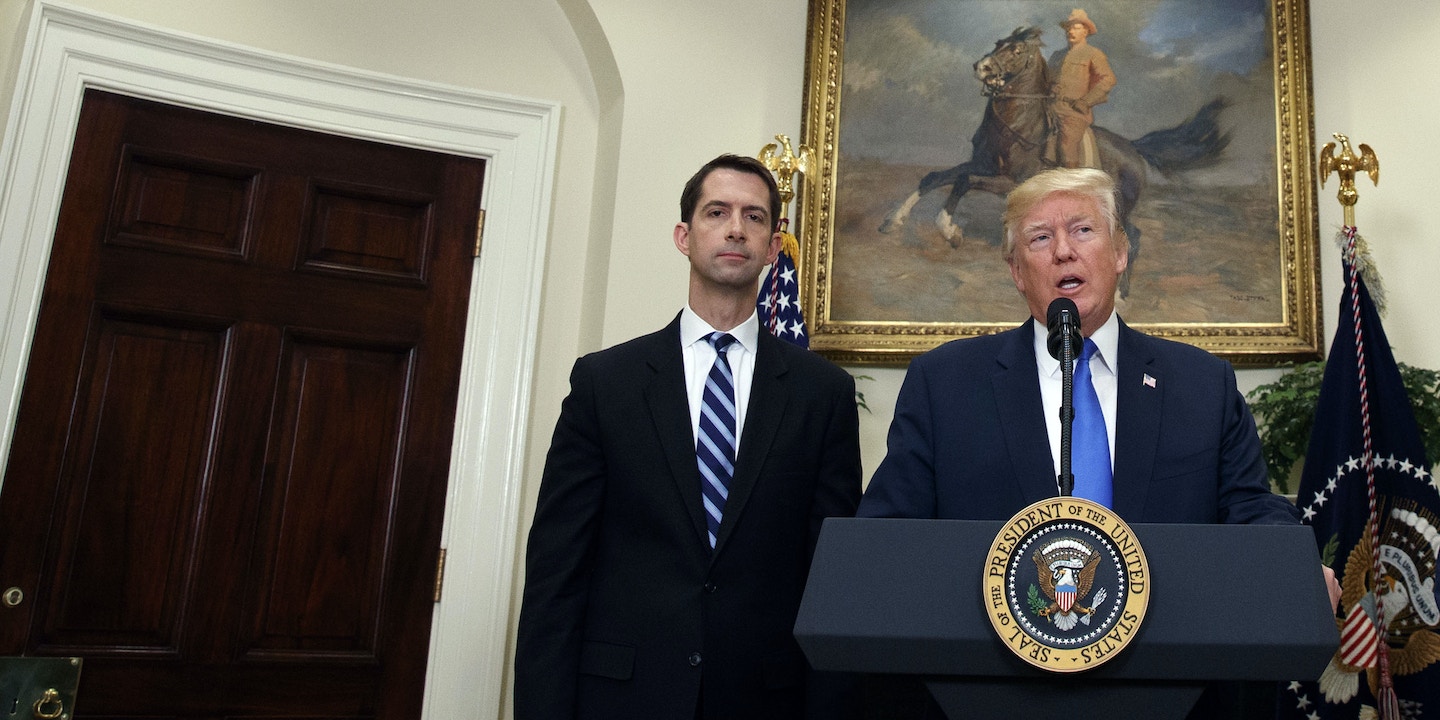 One of the most hawkish members of Congress could soon become the new head of the CIA, according to senior Trump administration officials quoted in the New York Times. Arkansas Sen. Tom Cotton, a Republican, is potentially being tapped to replace current CIA chief Mike Pompeo, who in turn is reportedly being considered as a replacement at State Department for the hapless Secretary of State Rex Tillerson.

Cotton’s record of extreme public statements on both foreign and domestic policy is no secret. But one particular episode from his past points to a potentially dangerous convergence of views with President Donald Trump. In 2013, as part of a bill sanctioning Iran over its nuclear program, Cotton attempted to introduce an amendment specifically designed to punish the families of sanctions violators “to include a spouse and any relative to the third degree,” specifically identifying “parents, children, aunts, uncles, nephews, nieces, grandparents, great grandparents, grandkids, great grandkids.”

The alignment of a bellicose president like Trump with someone like Cotton could be dangerous, both to America’s international standing and to the lives of people caught in the crosshairs of U.S. military policy.

In his justification for the amendment, Cotton cited the fact that individuals targeted for sanctions measures sometimes shift assets to family members as a means of escaping restrictions. To solve this problem, Cotton’s amendment would have targeted family members automatically — under provisions that would lead to a punishment of up to 20 years in prison. “There would be no investigation,” Cotton said at the time. “If the prime malefactor of the family is identified as on the list for sanctions, then everyone within their family would automatically come within the sanctions regime, as well.” Cotton called the principle “corruption of blood.”

Cotton’s idea to target the families of suspected sanctions violators was criticized by lawmakers and didn’t gain any traction at the time. But under the Trump administration, extreme ideas like this could get new life. During his election campaign, Trump famously promised to kill the families of suspected terrorists, crudely suggesting that killing innocent people would help create a deterrent effect. The fact that this, like the deliberate killing of civilians generally, would be a baldly criminal act didn’t seem to deter Trump during the election. Judging by the air campaigns in Iraq, Syria, and elsewhere, there is little to indicate that Trump has had a change of heart since coming to office.

The alignment of a bellicose president like Trump with someone like Cotton could be dangerous, both to America’s international standing and to the lives of people caught in the crosshairs of U.S. military policy.

Putting an extremist policymaker like Cotton in charge of the CIA — an institution already famous for its lack of accountability — could conceivably lead to the possibility that the United States will begin doing things like deliberately targeting the innocent family members of suspected enemies as a matter of policy, whether that policy is publicly acknowledged or not. Pompeo has already recently warned that the CIA is on the cusp of becoming a “much more vicious” intelligence agency, a bar that would be hard to clear for an organization with a deeply checkered past of torture, assassination, and the deposition of elected governments.

To put it in perspective, the punishment of family members for the crimes of their relatives is a policy that was enthusiastically pursued by 20th century totalitarian states. If Cotton is appointed CIA director, the hopes that he will be meaningfully restrained by a president who hews to his basic worldview is slim.