More than 60 percent of Americans say CHIP reauthorization should be a top federal priority, while only 28 percent say tax reform should be. 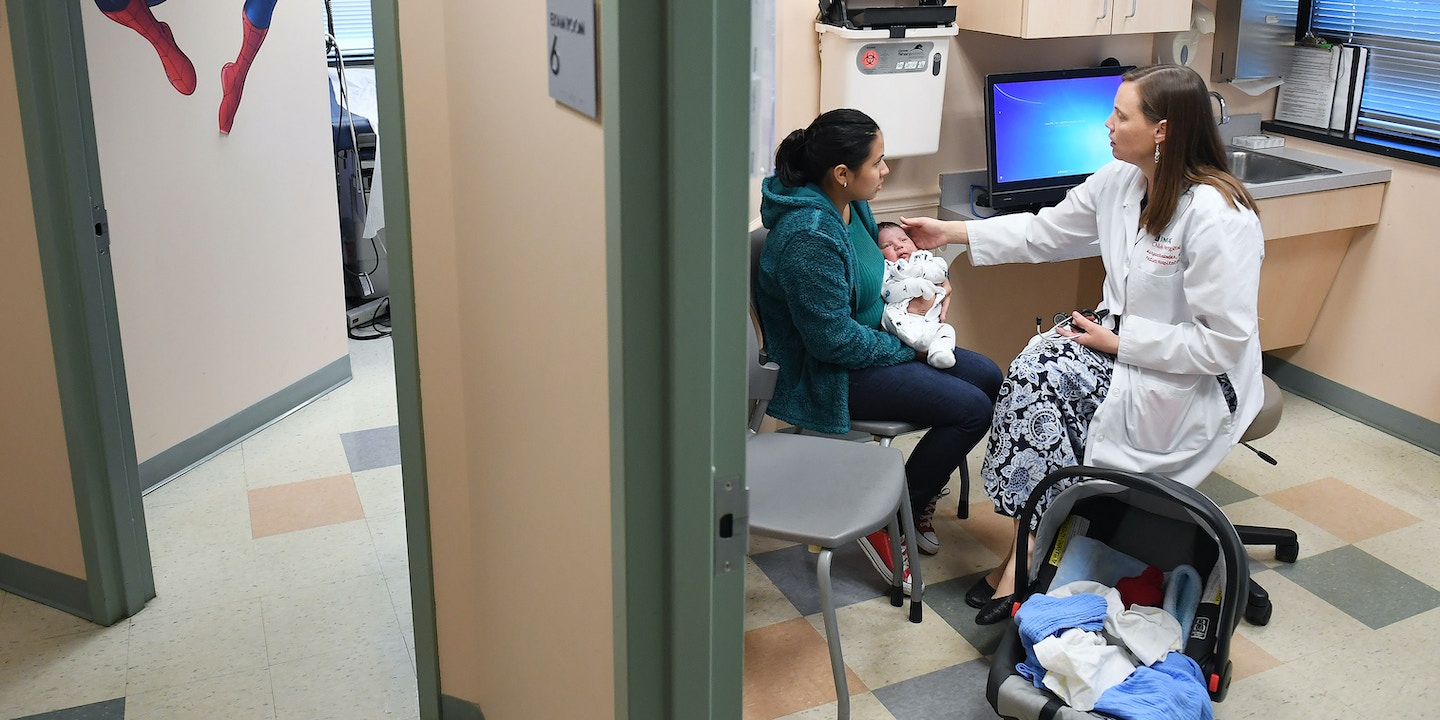 The lead author of the Senate Republican tax plan, Finance Committee Chair Orrin Hatch of Utah, said the federal government no longer has the money to fund the popular Children’s Health Insurance Program, known as CHIP.

CHIP is an $8 billion program. The Senate bill passed in the early hours of Saturday morning includes $6 trillion in tax cuts, financed by $4.5 trillion in tax hikes elsewhere. Hatch, though, promised CHIP would still pass. “We’re going to do CHIP, there’s no question about it in my mind. It has to be done the right way,” he said.

As the expiration date for CHIP loomed over the end of September, lawmakers similarly assured the public they would reauthorize the popular bipartisan program that provides coverage to nearly 9 million kids and roughly 370,000 pregnant women.

After all, when CHIP was last up for reauthorization in 2015, Congress got the job done with more than five months to go. In fact, CHIP — which passed in 1997 — has never had a lapse in funding except for just five days when former President George W. Bush twice vetoed its reauthorization. Congress responded with some short-term financing until CHIP could be formally reauthorized in 2009 under former President Barack Obama.

Well this year, April came and went. Then May. Then June. Then Congress stressed they would definitely get to it before the August recess. Except then a new effort to dismantle the Affordable Care Act took hold, crowding out all else. When the Obamacare dismantlement effort died, legislators said, “No, no, it will be coming back.” Then they promised to reauthorize CHIP at least before it expired in September. “Well … OK, we’ll get it done in October — states still have some federal funding left in their reserves,” they said next. And then, “All right, we hear you, we’ll definitely deal with it before Thanksgiving.”

Now it’s December and lawmakers are saying, “Don’t worry, we’ll get it done by the end of the year.”

As tax reform picks up, health experts are feeling nervous. Never mind that more than 60 percent of Americans say CHIP reauthorization should be a top federal priority, while only 28 percent say tax reform should be.

“Under normal circumstances I’d say, ‘Yeah they’ll pass it,’” said Bruce Lesley, president of First Focus, a children’s advocacy group. “But we’ve been promised this for months now, and Congress has shown no ability to focus on this, to get it done.”

The consequences of Congress’s inaction are already visible. While most states had some funds remaining in their coffers to last them a few months past CHIP’s expiration date, Governing magazine reported this week that Minnesota has officially run out of federal CHIP money. For now, Minnesota officials say they’ll work to bridge the funding gap, but not all states have laws that allow for that. Colorado also started sending out notices this week to CHIP enrollees, letting them know the state will be shutting down the program by January 31 if Congress doesn’t act soon. Pennsylvania, Texas, Utah, Virginia, and Washington are also expected to run out funds in early 2018, and the federal centers for Medicare and Medicaid Services say “the majority of states [are] projected to exhaust funding by March.” Even temporary enrollment freezes can lead to major drops in coverage. Researchers at Georgetown’s Center for Children and Families report that Arizona’s enrollment fell by more than 60 percent when the state temporarily froze the program in 2009, and North Carolina’s enrollment fell by nearly 30 percent when it froze CHIP for 10 months in 2001.

Even if states think that Congress might come through with funding, they have to prepare for the eventuality that it won’t — regardless of how much that costs, or how much confusion it creates.

“The way Congress is doing this is devoid of any understanding of how programs run,” said Lesley. “I used to work in state government. If you’re running a program, and there’s uncertainty, you have to plan to close it down. You have no choice.”

So what’s the hold-up?

Part of it involves Congress fighting over how CHIP will be paid for, with legislators looking for $8 billion in what’s known as “offsets.” There are rules requiring Congress to determine where these offsets — or money for new spending— will come from, but these rules are often waived. Just last month, when Congress passed a bill to repeal the Independent Payment Advisory Board, a panel created through the ACA to make cost-saving recommendations, legislators waived the $18 billion offset requirement. And now Congress is preparing to pass a mammoth tax reform bill that the Joint Committee on Taxation said Wednesday would fall almost $1 trillion short of paying for itself. Offsets be damned.

Before this, Congress paid for CHIP using tobacco taxes, but those weren’t locked in, so that revenue now just goes to the federal treasury. “There’s enough money that CHIP shouldn’t ever have to be paid for by more offsets, yet now it’s expiring so none of that $2 in tobacco taxes, raised for CHIP, applies to CHIP,” said Lesley. “So here we are in reauthorization having to find offsets yet again.”

In early November, the House passed a bill, 242-174 largely on party lines, to reauthorize CHIP by taking money from the ACA’s public health preventative care fund, which pays for programs like opioid treatment and vaccinations. Energy and Commerce Committee Ranking Member Frank Pallone Jr., D-N.J., charged that Republicans were capitalizing on CHIP reauthorization as a new way to sabotage the ACA. Pallone proposed changing the payment schedule of Medicare Advantage Plans to fund CHIP, but Republicans rejected that in the Rules Committee.

In mid-September, Hatch and ranking member Ron Wyden, D-Ore., announced a bipartisan agreement to reauthorize CHIP for five years, but they haven’t yet brought the bill to the floor. They also haven’t made clear where the offsets will come from. Experts suspect that Senate leaders kept it off the floor because they worried it might have been derailed by partisan amendments, and they wanted to avoid politicizing CHIP in the way that the ACA and the Deferred Action for Childhood Arrivals program, known as DACA, have been.

Cynthia Pellegrini — senior vice president of public policy at the March of Dimes, an advocacy group focused on infant and maternal health — told The Intercept that her group has been hearing through the grapevine that the Senate has likely reached a bipartisan deal on offsets, though she doesn’t know more than that. But since Senate Democrats are unlikely to vote for anything that harms the ACA, that offset deal, Pellegrini said, “by definition” would exclude the public health prevention fund.

Passing CHIP on its own would allow for less horse-trading, but the clock has likely run out for that this year.

“There are procedural barriers to just putting up CHIP as an independent bill no matter what,” said Pellegrini. “In this climate, it would have to go through cloture and have to have floor time. The Senate only has 15 or 17 more legislative days — though they may extend that into Christmas week — but there is literally no time left with everything else they want to be doing to put it up by itself. With the budget, CR [continuing resolution], tax reform, potentially Iran, all these bills have piled up. The question is, can they combine CHIP with other bills in a package and get it through faster?”

One option could be to move it through a strategy known as “hotlining” — in which the Senate gets the unanimous consent of all 100 members and moves it through rapidly on a voice vote. That means the package they’d be approving would either be very noncontroversial or very bipartisan.

Whether Congress can hotline CHIP will depend on if leaders can put forward something attractive enough that every senator would support — or at least not oppose it so much as to make a stink. The Senate could possibly package CHIP with other bills it is trying to get through by the end of the year — like Home Visiting reauthorization, Medicare extenders, or disaster relief.

A Wyden spokesperson told The Intercept that the senator “remains optimistic common sense and decency will prevail over partisan politics.”

Lesley of First Focus — who helped draft the original CHIP bill in 1997 — said it’s frustrating that this whole debate over offsets isn’t even about expanding coverage, just maintaining the status quo. “We would say this provides an example of why next time we need to recapture all those tobacco dollars and create a trust fund for CHIP so this never happens again,” he said.

Top photo: Ana Elsy Ramirez Diaz holds her son, Milan Rojas Ramirez as he is seen by Dr. Margaret-Anne Fernandez during a check-up visit at INOVA Cares Clinic for Children on Tuesday, Oct. 31, 2017, in Falls Church.