One of the most Democratic-dominated cities in Georgia may elect a conservative independent as mayor on Tuesday. Disgust at neoliberalism may explain why. 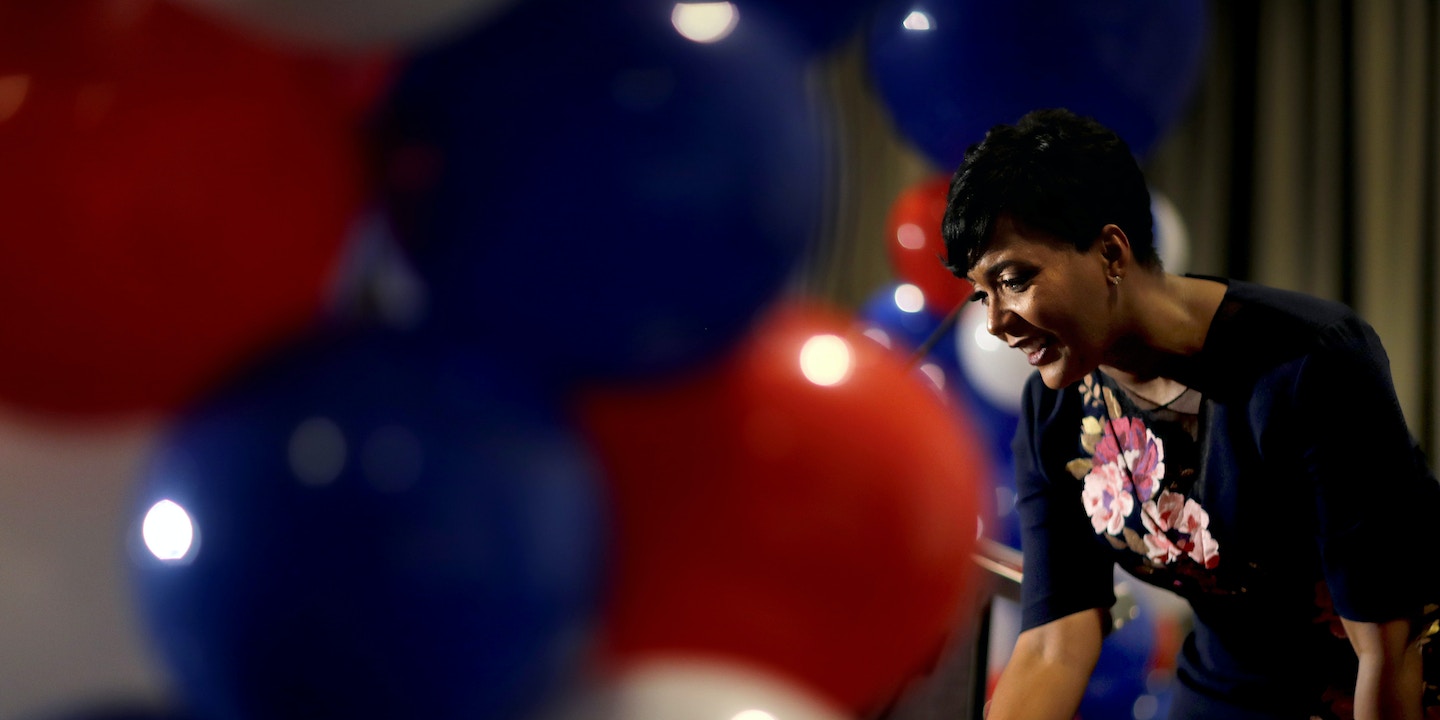 Tensions between the business-friendly wing of the Democratic Party and the progressive faction have endangered the Democratic candidate for mayor of Atlanta in what ought to be a cakewalk of an election.

On Tuesday, Atlanta’s heavily Democratic-leaning voters will go to the polls in the runoff in the mayoral election. Technically, the race is nonpartisan, but the state’s Democratic Party has aligned behind City Council Member Keisha Lance Bottoms, who is backed by term-limited incumbent Mayor Kasim Reed, commander of a sizable portion of the Democratic machine in the city. In Atlanta’s Fulton County, Hillary Clinton won 67 percent of the vote.

Her opponent, City Council Member Mary Norwood, is a conservative-leaning independent who has supported both Republicans and Democrats in the past, and she has the support of what Republican Party infrastructure actually exists in Atlanta. Norwood is also white, while Bottoms is African-American. The last white candidate to win the mayor’s race in Atlanta was Sam Massell in 1969. The state party has come out with heavy-handed attack ads deriding Norwood as a Republican, a signal to the city’s voters of who they are backing. Their argument is laid out on a website called MaryTheRepublican.com, where they point out she has paid some Republican consultants as part of her campaign, that she refused to back Jon Ossof in his congressional race, and that she implied to a local Republican Party group that she is an independent because Republicans can’t win in Atlanta.

So you’d think that winning the mayor’s race in Atlanta would be a breeze for Bottoms. But you’d be wrong.

To start with, things are going very poorly for Bottoms when it comes to local endorsements. Of the two most left-leaning, first-round candidates in the mayoral race, Cathy Woolard and Vincent Fort, neither endorsed Bottoms. Woolard came out for Norwood, and Fort has declared that he is neutral in the runoff.

Meanwhile, a slew of other Democratic Party-aligned candidates came out for Norwood — including former Atlanta Chief Operating Officer Peter Aman and Atlanta City Council President Ceasar Mitchell. Shirley Franklin, who served as Atlanta’s popular mayor prior to Reed, also came out for Norwood. In the pages of the Atlanta Journal-Constitution, liberal and conservative columnists both endorsed Norwood. AFSCME and several local unions, including firefighters, are backing Norwood. National progressive organizations, such as the Working Families Party and Our Revolution that boosted Fort in the first round, have not endorsed in the runoff.

To make up for this deficit, Bottoms has recruited help from state and national Democrats. Former Democratic gubernatorial nominee Jason Carter has come out for her, as has Stacey Evans, a former state representative vying for the governor’s mansion next year, and Jon Ossoff, who ran a high-profile but ultimately failed bid in a special election in the Atlanta suburbs earlier this year. New York City Mayor Bill DeBlasio put out a statement supporting her; California Sen. Kamala Harris will be in town Sunday to support her.

Rappers Killer Mike, who initially backed Fort, and T.I. have both come out in support of Bottoms.

But some of the polling shows that the race is a dead heat. A survey released late Friday night showed Norwood with a 6-point lead — and significant crossover support among African-American voters and Democrats.

So what’s going on?

Many political activists in Atlanta cite Reed as the reason some progressives are rallying to Norwood. Reed has been the consummate neoliberal mayor, close to contractors and developers, and hostile to the city’s activist movement on issues like affordable housing —  while avoiding much of the progressive policies other big-city mayors are using to tackle income disparities. The New York Times’s Thomas Friedman once held the Reed administration up as a model for its willingness to cut back the pensions of its public workers. As The Intercept noted in an article profiling Fort’s bid earlier this year, Atlanta has been ranked as the most unequal city in the country. Mary Norwood, candidate for mayor, gives volunteer Jerome Whitaker a hug for his support at her headquarters Tuesday, Nov. 7, 2017, in Atlanta.

Tim Franzen, a longtime organizer who worked for Fort’s campaign, told The Intercept that while he plans to vote for the conservative Norwood, he’s not endorsing her or her politics. But he explained the dynamics that are leading many progressives to consider a Norwood vote.

“There’s these narratives going around — one is that [this] is a Trump-Clinton situation. It’s 100 percent not what we have here in Atlanta. Mary Norwood is a constituent-services politician. She always has been. She’s not an ideological person,” he explained.

Reed’s administration has also been the center of ethics scandals over the past few years over pay-to-play arrangements; his endorsement of and fundraising for Bottoms makes many question her own commitment to reform on the issue.

And beyond issues of ideology and ethics, Reed has been known to be caustic. When Mitchell endorsed Norwood, Reed’s response was terse:  “One man, one woman, two losers.”

Some progressive Atlantans view Bottoms as a sort of third term for Reed and his ideas — a perception that is boosted by the generous financial backing airport contractors close to his administration have thrown her way. One Atlanta progressive news website that tracks votes on the city council ranks Bottoms as less progressive than Norwood; on issues like housing and homelessness, she has been a steady ally of Reed.

On the popular state political website GeorgiaPol.com, George Chidi — a former Bernie Sanders backer and Occupy Atlanta supporter — penned the post “A Black Voter’s Case for Mary Norwood.” He took the Democratic Party to task for taking the black vote in Atlanta for granted. “The party fails to understand what Atlanta means to black people here, and everywhere in America, frankly,” he wrote. “We have a city that has the Gini coefficient of Caracas, nearly the widest gap in racial income in the country, and the lowest income mobility in America. In a recent symposium on racialized homelessness in Atlanta, a speaker noted that the average income of a black household in the city of Atlanta is under $30,000 a year. The average for a white household is over $80,000.”

In an interview with The Intercept, Chidi said he hopes Norwood would focus on corruption if she wins. “I hope she won’t be corrupt. I hope she’ll find those who are and see them punished,” he said. “By doing so, I hope she’ll maintain the city’s international posture as a place to do business.”

He also wants to see her continue to step up on housing affordability. “Aside from that, I hope and expect her to tell developers looking to build without consideration for the long-term consequences to the city to kiss her ass. She’s actually been pretty good at that over the years, something she’s getting scant credit for,” he said.

And ultimately, the arguments that Norwood is a secret Republican fall flat in the face of her support base. Yes, she has courted Republicans as part of her campaign, but she’s also courted Democrats and progressive independents — her list of endorsers proves that, as does the poll cited above that shows over 42 percent of Democrats in the city are backing her bid. Her stances on social issues in particular — supporting abortion rights and marriage equality — place her far out of step with Georgia’s traditionally socially conservative Republican Party.

Franklin, the former mayor, alluded to Reed’s ethical issues and explained her rationale for endorsing a white candidate. “For me, race was not the first issue,” she said in her speech endorsing Norwood. “Character, transparency, and integrity are the first issues for me.” (Norwood has come out for campaign donation limits on city vendors.)

Reed’s long shadow also played a role in Woolard’s endorsement of Norwood. “I feel like the lack of transparency at this City Hall has crushed the spirit of our city, and I feel like we need a very clean break with this administration and a new start here, with a fresh set of players,” she said in her speech announcing the choice.

Former Democratic State Rep. LaDawn Jones — former chair of the Sanders campaign in the state and a leading progressive pundit — worked through her own concerns in a blog post on GeorgiaPol.

She wrote that she was initially hesitant to back Norwood, but she went through a process of self-interrogation to try to figure out why. “It could have been party politics, racial politics, concern about backlash from the black Atlanta community, or because I really don’t get excited for either candidate,” she wrote.

But after citing many of the same ethical and ideological issues that concern many progressives, Jones came to a sharp conclusion. “If race or party come first in your evaluation, that is your choice. But you should know that if you can look past the ethical issues that the black Democrat has solely because of her identifiers then you are doing the exact same thing the Roy Moore voters are,” she wrote.

Franzen shared Jones’s torn feelings about Norwood, whose politics are significantly more conservative than his. But in the end, he couldn’t bring himself to vote for a continuation of the Reed regime.

“Everyday Atlantans are feeling the squeeze like they haven’t felt in decades. So I’m not passionate about Mary Norwood, but I and other people who work on municipal issues have no other choice but to work against Keisha,” Franzen reluctantly concluded.