Ten Democrats have co-sponsored a bill that would deregulate Wall Street. That makes the GOP-led effort more than theoretical; it’s a real risk to pass. 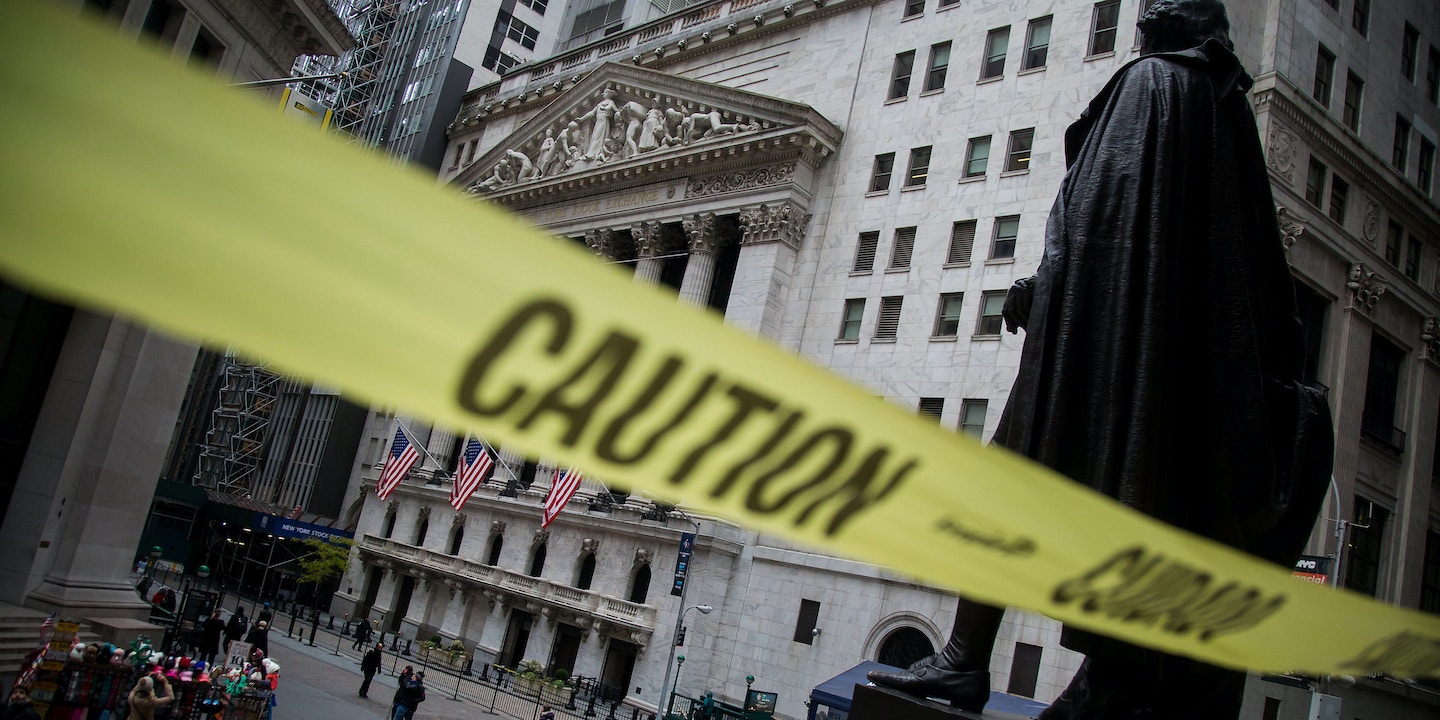 With the GOP’s tax plan moving ahead and the Obamacare fight in the rearview mirror, Republicans in Congress are setting their sights next on deregulating Wall Street.

But unlike the previous battles, they can count on Democratic help in this fight.

They will also face an invigorated populist wing of the party. During the debate over whether to create the Consumer Financial Protection Bureau, Elizabeth Warren, not yet a senator, famously said at a crucial moment that her first choice was a strong agency, and her second was “no agency at all and plenty of blood and teeth left on the floor.”

She’ll get her chance Tuesday in the Senate Banking Committee.

Warren was stymied from running the CFPB, lacking the votes to get Senate confirmation. So she now represents Massachusetts and has teed up 23 different amendments for a markup on S.2155, the Economic Growth, Regulatory Relief, and Consumer Protection Act. The Orwellian-named bill would actually deregulate several parts of the financial sector and unravel consumer protections in a corrupt alliance between Republicans and pro-Wall Street Democrats.

The amendments offer a stark choice between gift-giving to some of the largest banks in America and maintaining regulatory standards to prevent taxpayer bailouts and runaway financialization. Democratic aides characterize S.2155 as the next wave of corporate largesse after last week’s passage of a tax overhaul, with next to nothing for consumers, despite the bill title. If some conservative Democrats want to ally with Republicans on this effort, Warren wants to make sure everybody knows their names and their priorities.

Four Democrats — Banking Committee members Joe Donnelly of Indiana, Heidi Heitkamp of North Dakota, Jon Tester of Montana, and Mark Warner of Virginia — negotiated S.2155 with Republican leaders. In all, 10 Democrats have co-sponsored the bill, giving it enough support to break a Senate filibuster if all Republicans sign on. That makes the deregulatory effort more than theoretical; it’s a real risk to pass.

Democratic staffers on the Banking Committee cite three major problem areas for S.2155. First, despite being pitched as relief for community banks and small lenders who played no role in the financial crisis and got caught up in the regulatory undertow, the bill extends that aid to the big boys. It eliminates automatic enhanced standards, like higher capital requirements and “living wills” that lay out how to unwind the firm in case of trouble, for banks with between $50 billion and $250 billion in assets. This includes large regional and national players like American Express, SunTrust, and BB&T, and foreign mega-banks, like Barclays and Deutsche Bank, whose holdings in the United States fall within that threshold. These international lenders have been notorious “repeat offenders,” paying tens of billions of dollars in fraud penalties for actions like repossessing the cars of service members while they fought overseas.

In all, the bill removes enhanced supervision from 25 banks that control $3.5 trillion in assets and received $48 billion in taxpayer bailouts, according to an analysis from Public Citizen.

S.2155 also changes stress tests — which check if banks can manage hazardous scenarios — for all banks, making them “periodic” (which could mean whatever regulators want it to mean, staffers say) instead of annual. So JPMorgan Chase, Wells Fargo, and Bank of America, along with literally every big bank in the country, recipients of hundreds of billions of dollars in bailouts, get assistance in this “small bank” relief bill. The stress test itself would change — at the discretion of President Donald Trump’s deregulatory army — for large regional firms.

Next, the bill rolls back protections on the mortgage market, by tweaking “safe harbor” and “qualified mortgage” provisions in ways that would allow small lenders to sell high-cost, adjustable-rate mortgages and avoid accountability in court for wrongful foreclosures. Just because a no-documentation or interest-only mortgage comes from a community bank doesn’t make it a safe financial product.

The bill also eliminates the need for appraisals in certain rural areas, creating incentives to cheat homebuyers; exempts sellers of manufactured homes like trailers from mortgage rules, which benefits the dominant player in that space, Warren Buffett’s conglomerate Berkshire Hathaway; and restricts data collection about mortgage lending that could help regulators spot the next crisis.

Finally, there’s no “consumer protection” worthy of the name in the bill. The tentpole consumer piece is a watered-down version of a recent bill from Warren that would offer consumers stung by data breaches at credit reporting agencies like Equifax one free credit freeze and unfreeze every year. Warren’s bill would have made all credit freezes free. Even Equifax eventually offered a lifetime credit freeze, more than the authors of S.2155. And the measure preempts states from giving more generous terms to its citizens.

A Warren aide provided The Intercept with the 23 amendments. One replaces the inadequate credit freeze language with her bill, the Freedom From Equifax Exploitation, or FREE Act. Others add protections like preventing the use of credit reports in hiring, allowing students to sue student loan companies, rather than be forced into arbitration. Another measure expands credit card regulations to debit cards and cards branded by colleges and universities.

The bulk of the amendments attack the new regulatory exemptions for banks above $50 billion in assets. And Democratic supporters of S.2155 won’t like having to vote for any one of them. Here’s the list:

Requires CEOs, CFOs, COOs, and CCOs of companies that receive SIFI relief to sign an annual certification that they have conducted due diligence and can certify that there is no criminal conduct or civil fraud in their organization. (“SIFI relief” stands for systemically important financial institutions, a label that these banks with between $50 billion and $250 billion in assets will be able to shed.)

Bans mergers and acquisitions for five years for any banks that receive SIFI relief.

Prohibits SIFI relief for any bank that got more than $250 million in TARP money.

Prohibits stock buybacks for five years for any bank that received SIFI relief.

Prohibits SIFI relief for any bank under consent decree or a deferred prosecution agreement or that has a monitor.

Prohibits SIFI relief for any bank fined more than $10 million by the United States for five years.

Prohibits SIFI relief for financial institutions with any final violations (uncontested, settled, or adjudicated) for willful or repeated violations of the Occupational Health and Safety Act in the previous five years.

Prohibits SIFI relief for financial institutions that have fired of retaliated against whistleblowers.

Prohibits SIFI relief for financial institutions with any willful or repeat violations of the Fair Labor Standards Act within the last five years.

Prohibits SIFI relief if workers at the financial institutions who are compensated on a salary basis, or equivalent fee basis, are not paid overtime for hours worked over 40 a week if they are compensated at a rate per year that is less than $47,500.

Prohibits SIFI relief if the financial institution does not require all broker-dealers, financial advisers, and investment advisers to adhere to a fiduciary standards, putting their clients’ interests ahead of their own.

Prohibits SIFI relief if the financial institution does not pay all workers at least $15 an hour.

And just in case none of those work, Warren has an amendment to just strike the SIFI relief from the bill altogether.

These are politically tough amendments for Democrats like Heitkamp, Tester, Donnelly, and Warner to oppose, especially after spending the last week railing against Republicans for waging class warfare on low-income Americans in the tax bill. Republicans may defeat these on their own, but the goal is to name and shame Democrats who support this giveaway to big banks without bringing along anything for the public, like more jobs, higher wages, labor protections, and safeguards against bank deceptions.

While pro-bank Democrats like Tester have used high-profile hearings to insist that S.2155 does not put the financial system at risk, they haven’t had to specifically defend lowering regulations on banks that took TARP bailout funds and paid enormous fines for wrongdoing, and they haven’t enumerated what ordinary people get out of the deal instead of bank executives. Warren’s amendments will force some kind of answer on that score.

Top photo: Caution tape hangs near the steps of Federal Hall across from the New York Stock Exchange in New York on Monday, Nov. 20, 2017.