The President and the GOP Are Backing a Flagrant Bigot for U.S. Senate

In 2017, Republicans are backing a guy who longs for the days when African-Americans were in chains.

It’s hard to know a moment in history when you are in it. The human ability to grasp the weight and gravity and consequence of an event, while it unfolds, is fleeting. History, as it turns out, is seen most clearly in retrospect.

For most of my adult life, I wondered why people didn’t do more to stop the Trans-Atlantic slave trade. I questioned the morality and integrity and decency not just of the people who bought and sold human beings alongside commodities like sugar and rice, but I questioned the tens of millions of people who watched it all and did nothing.

Then, with my own eyes, I saw human beings, Africans again, being bought and sold in Libya. Detained in crowded pits. Desperate for freedom but stuck in an unfamiliar port, about to be crammed onto ships and sent again across the sea. And like most of you reading these words, I’m deeply ashamed to say I’ve done nothing. Sure, I tweeted and Facebooked. Some friends and I are investigating what options we have, but here I am, a man of privilege, nearly 400 years after slavery was established on this land, doing nothing substantive about it today.

Centuries on, students may look at us and wonder how we saw what we’ve seen and did so little with what we knew.

Centuries on, students may look at us and wonder how we saw what we’ve seen and did so little with what we knew. I want to posit again that when you are simply living your life, with bills and responsibilities and tasks at hand, it’s hard to know the gravity of the moment that you may be in because in the seriousness of all that has happened today, you also had to eat, get dressed, brush your teeth, and go about your day.

All of that is to say that every fiber of my being screams that we are in a deeply problematic moment in American history.

With the full knowledge that Roy Moore, twice ousted from the Alabama Supreme Court, has been accused of gross sexual misconduct with teenage girls, the Republican Party and the president of the United States have backed the man in his bid to become a United States senator anyway. So hungry, desperate even, for political power, the party that was widely seen as the morality police for several generations, has traded all of that away for a Senate seat. 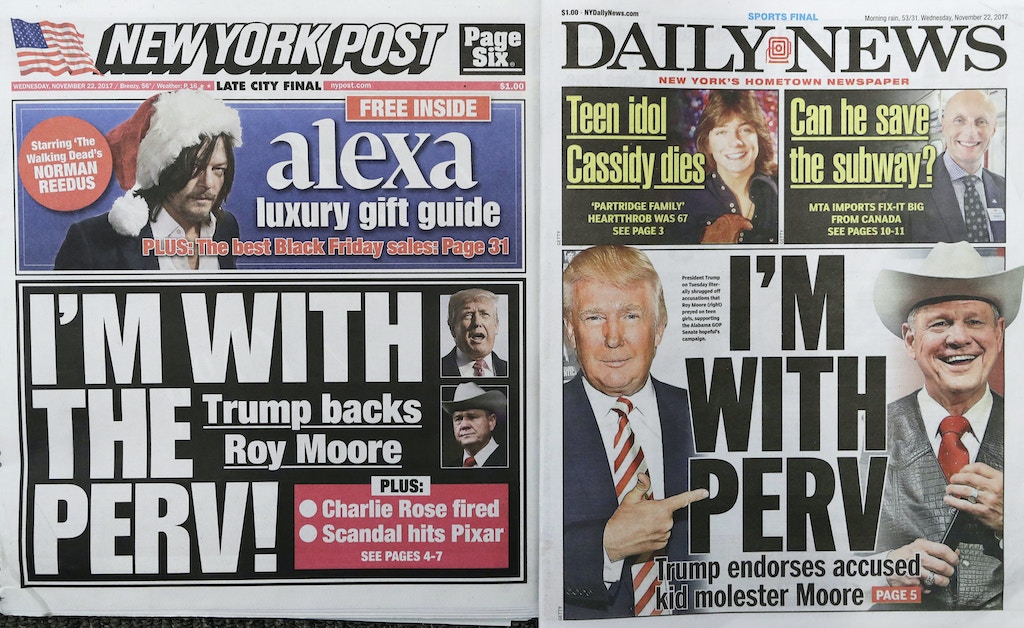 The full-throttle endorsement of Moore is not just troubling because of the accusations of pedophilia, but it was just revealed that in 2011, Moore stated that getting rid of all of the constitutional amendments after the 10th Amendment “would eliminate many problems.”

It was of course the 13th Amendment that ended plantation slavery in America. The 14th Amendment required states give all people equal protection under the law. The 15th Amendment extended the right to vote to all men of color. The 19th Amendment granted women the right to vote. That’s a lot of amendments that afforded basic rights to lots of people.

This past September, when asked by one of the lone African-Americans in the audience when the last time this nation was great, Moore responded by fondly recalling the days of slavery and said, “I think it was great at the time when families were united — even though we had slavery — they cared for one another.” He added, “Our families were strong, our country had a direction.” Yes, this really happened.

The Republican candidate for a U.S. Senate seat from Alabama dreamed of killing every constitutional amendment after the 10th and recalled the years of American slavery as the last time this nation was great.

Even if Moore loses, the damage is already done.

Across the internet, I’ve seen people respond to this with quips. “Is this 1957 or 2017?” is how some of the responses go. I get what these commentators mean. They assume that this nation had progressed in such a way that a man who has said and done what Moore has said and done could not be elected to the Senate with the full backing of the Republican Party and a Republican president.

Well, it’s happening. And even if Moore loses, the damage is already done. Actions and views that should never be allowed into the mainstream have been embraced and funded at the highest level. The man is an abusive bigot. He openly said that Muslims like Rep. Keith Ellison, D-Minn., should not serve in Congress. The list goes on and on.

Again, it’s hard to know a moment in history when you are in it, but I am pretty sure we have crossed the tipping point of the gross normalization of bigotry and sexual abuse in this country. It’s not from the fringes. It’s not from a registered hate group with hoods on. It’s not whispered or tweeted by anonymous trolls. Roy Moore, pistol waving in the air, is a public menace of the highest order, and he’s been embraced by the party in control of the U.S. government and by the sitting president who leads it.

It might be troubling and concerning, but this is what the most powerful nation in the world is today.