Zahr Said didn’t think much about her inability to check in online for her flight home to Seattle after an October business trip in Beijing. She also didn’t worry too much about being twice singled out for additional screening before boarding her flight and again at the U.S. Customs and Border Protection checkpoint at Seattle International Airport. The University of Washington law professor assumed the heightened security measures might have been linked to an annual weeklong Communist conference in China. But when she had similar difficulties checking in for an October 26 flight to Irvine, California, Said realized it was more than just an anomaly. She was puzzled that, despite having Global Entry clearance, which allowed her expedited entry through airport security and customs, she had become a target for airport questioning and invasive pat-downs.

Three days later, Said got an email from CBP notifying her that her Global Entry clearance had been revoked. Said spoke to the enrollment office at the Seattle airport, which told her that the revocation came from a higher office responsible for vetting procedures, she said.

“I live in Seattle. I have children. I have two stepchildren. I have a husband. I teach yoga.” Said, 41, told The Intercept. “It all makes me who I am — and I feel all of those things evaporate in a second when TSA or CBP seem to make it about me having a Yemeni father or being born in Lebanon.”

But Said is not alone. She is one of hundreds of travelers with a Muslim, Arab, or South Asian background whose Global Entry clearances were revoked, in what lawyers and civil rights activists say is a de facto extension of the Trump administration’s Muslim travel ban.

The American-Arab Anti-Discrimination Committee in August and October obtained emails and documents through the Freedom of Information Act confirming that CBP revoked Global Entry memberships for hundreds of travelers from Arab and Muslim-majority countries – many of them U.S. citizens — earlier this year. And ADC’s own records show that the number of revocations exceeds what CBP has acknowledged.

“What has happened, in practice, is that people who were once able — by the virtue of Global Entry — to escape the constant racial and ethnic profiling they faced when traveling have now been suddenly, and without explanation, denied that privilege,” Free told The Intercept. “The only thing they all have in common is that nothing has changed in their own personal situations, and, of course, the reality of their own identities.”

In March, ADC filed a FOIA request with CBP for emails that contained the terms “Muslim,” “Arab,” “Muslim ban,” “ban,” and “travel ban.” CBP did not timely respond to the request, so ADC filed a lawsuit in April. On October 6, nearly six months later, CBP released records to the ADC. The response, Free said, is incomplete and misleading. For example, CBP only turned over emails from a single CBP manager’s email account, and they did not contain any of the keywords included in ADC’s request. CBP also has not conducted requested email searches that would reveal whether the agency issued any internal policies or memoranda on or after November 9, 2016, relating to the suspension, revocation, or cancellation of Global Entry memberships. 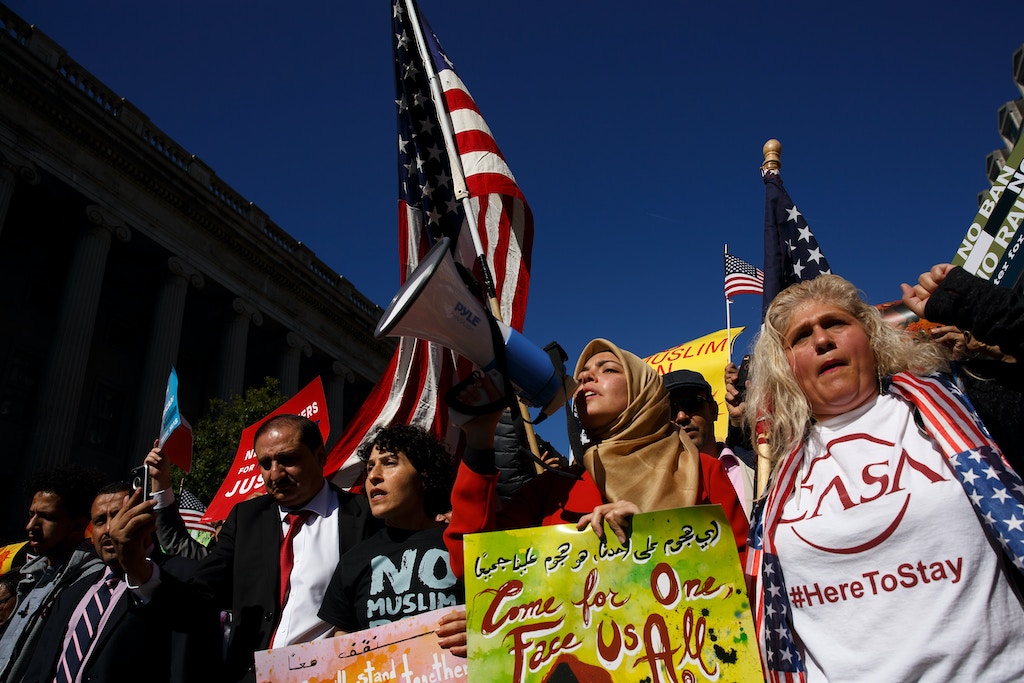 Following a rally in Lafayette Park, activists march toward Trump International Hotel during a protest against the Trump administration’s proposed travel ban, Oct. 18, 2017 in Washington, D.C.

CBP revoked 429 Global Entry memberships on January 31 and February 1 for citizens of Iran, Iraq, Libya, Somalia, Sudan, and Syria, and Yemen – the countries included in the first iteration of Trump’s travel ban – according to CBP documents released to ADC. But the numbers don’t add up, said Free, noting that 10 of ADC’s 30 clients were not included in CBP’s list, which identified travelers using their Global Entry traveler numbers. The Department of Homeland Security, CBP’s parent agency, also provided conflicting information to nine senators who sent a letter to then-DHS Secretary John Kelly inquiring about Global Entry revocations for Muslim travelers. DHS sent a memo to New Jersey Democratic Sen. Cory Booker, one of the letter’s signatories, claiming that 419 memberships were revoked following Trump’s January 27 order. The memo, which was released to The Intercept, also says all the memberships were reinstated February 2. Only one of ADC’s clients, however, have had their Global Entry reinstated, Siskind said.

The agency’s story does not add up, said Free, adding that the bigger problem is “what is not captured by these figures. Namely, there are dozens of individuals who’ve had their Global Entry revoked who are ostensibly excluded from CBP data.”

“We have enough to believe and enough to show that [CBP is] engaging in discrimination against Arabs, Muslims, and people with Muslim-sounding names.” – Abed Ayoub, ADC

DHS denies allegations of ethnic and religious bias. “Any assertion that DHS revoked Global Entry membership[s] on the basis of member’s ethnicity or religion, or because of an Arab or Muslim-sounding last name, is unequivocally untrue and insulting,” Michael Dougherty, DHS assistant secretary for border, immigration, and trade policy, wrote to Booker. CBP spokesperson Jennifer Garbis told The Intercept she could not comment on specific allegations, citing pending litigation, adding that the agency stands behind its previous statement.

ADC is continuing its litigation against CBP in an attempt to obtain additional records, but the records released so far also reveal that private contractors from Northrop Grumman, an American aerospace and defense firm, wrongly revoked global entry membership for lawful permanent residents and then struggled to correctly reinstate them.

“We have just been provided guidance that US LPRs [lawful permanent residents] are not subject to the Executive order issued on 1/27/2017,” a CBP staffer wrote in a February 1 email. “In the past 2 days, we have manually revoked, denied or failed risk on hundreds in this category.”

ADC Legal Director Abed Ayoub said the information from the FOIA documents reaffirms a widespread belief that CBP is actively discriminating against certain travelers. “With the information that is coming in, we have enough to believe and enough to show that they are engaging in discrimination against Arabs, Muslims, and people with Muslim-sounding names,” Ayoub told The Intercept. CBP has not released records explicitly explaining these revocations, and because the common thread among ADC’s clients is that they are Arabs or have Muslim-sounding names, the group believes the trend is an extension of Trump’s Muslim ban.

Ayoub said his group also heard from Muslim and Arab travelers whose Global Entry clearances were randomly revoked under the Obama administration, but the primary difference under Trump is the timing and volume of the cancellations. “The Trump administration has made it clear that it will do what it can to implement a backdoor Arab and Muslim ban, and this needs to be taken into consideration when looking at the influx of revocations,” Ayoub said. “The fact that many of these revocations happened after Trump took office raises the probability that this is part of an effort that discriminately targets Arabs and Muslims.”

And it’s not just the Global Entry cancellations. The Council on American-Islamic Relations, the largest Muslim civil rights organization in the country, documented a 1,035% increase in anti-Muslim incidents at the U.S. border within the first 100 days of Trump’s presidency.

According to Siskind, none of their clients have any criminal history or ties to terrorist groups, which could be causes for revocation. “If DHS will even look at one of these cases, they will see that their response to Senator Booker is nonsensical,” Siskind told The Intercept. “We know from the cases we have that this is a ridiculous argument. Doctors, law professors, accountants, Silicon Valley executives, and others who have been affected have one thing in common: their heritage.”

The issue extends beyond the cases ADC is working on – the civil rights group Muslim Advocates has also sued the DHS for information about the revocations. And Said lost her clearance nine months after the first travel ban was signed, an indication that the revocations continue despite litigation. Said will soon be a visiting professor at Stanford Law School, which means she’ll be traveling a lot, with or without Global Entry.

Top photo: A man looks out at planes at John F. Kennedy international airport following an announcement by the Supreme Court that it will take President Donald Trump’s travel ban case later in the year on June 26, 2017 in New York City.