The government’s case against the rest of the J20 defendants remains a threat to the First Amendment. 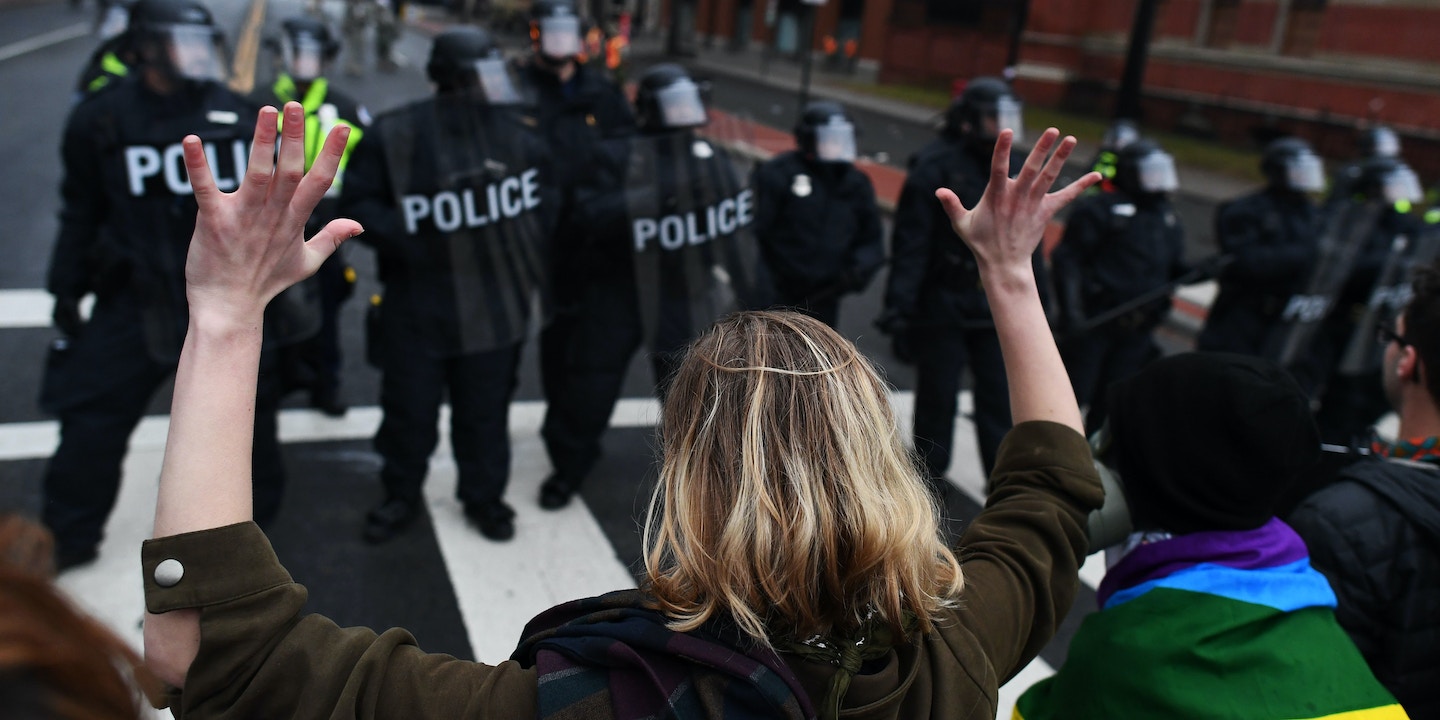 On Thursday, a jury acquitted six defendants charged with felonies stemming from their arrests at protests surrounding Donald Trump’s inauguration on January 20. The acquittal is a blow to the U.S. Attorney’s Office for the District of Columbia: a jury rebuke in the first tranche of 194 defendants the government is seeking to collectively punish for the acts of a handful of individuals.

Supporters gathered outside the courthouse to meet the defendants as they left the building, holding a banner that read, “Love for all who resist.” When a group of four jurors exited the courthouse, demonstrators recognized them and cheered.

The defendants had been arrested in Washington on Inauguration Day when police corralled more than 200 people, many of them demonstrating under the banner of “DisruptJ20.” The government eventually charged hundreds of people in connection with a small amount of property damage committed by a few individuals. Prosecutors sought to use a novel approach to group liability in the case to charge the defendants with an array of crimes — a tactic critics of the prosecution have said runs the risk of criminalizing dissent and poses a threat to the First Amendment.

“This is a demonstration that the jury didn’t buy the prosecution’s absurd theory of the case.”

“This is a demonstration that the jury didn’t buy the prosecution’s absurd theory of the case,” said Sam Menefee-Libey, of the Dead City Legal Posse, which is providing legal support to defendants. Menefee-Libey, who has served as a de facto spokesperson for the J20 defendants, added, “This is a big win for these six defendants and a big relief to everyone else who’s still fighting.”

In a statement, the D.C. U.S. Attorney’s Office made no indication that it intended to drop charges. “We appreciate the jury’s close examination of the individual conduct and intent of each defendant during this trial and respect its verdict,” said the statement. “In the remaining pending cases, we look forward to the same rigorous review for each defendant.”

Although the jury had lots of careful discussion over the past three days, a juror who only gave his name as Steve told the media collective Unicorn Riot it was not ultimately a close call. “The prosecution admitted the morning of day one that they would present no evidence that any of the defendants committed any acts of violence or vandalism,” Steve said. “From that point, before the defense ever uttered a sound, it was clear to me that ultimately we would find everyone not guilty.”

The jury’s decision heartened those still facing charges — even as they steeled themselves for more battles ahead. “I think most defendants are feeling vindicated right now,” said one defendant who, still facing charges, asked for anonymity to speak frankly. “What’s frustrating is it took these acquittals to prove to everybody the abuses we’ve endured for a year. From the moment of Trump’s inauguration, we were tortured by police, terrorized by the prosecutors, stalked by the ‘alt-right,’ vilified in the press and alienated from friends and family.”

Instead of presenting evidence that any of the six personally engaged in property destruction, Assistant U.S. Attorney Jennifer Kerkhoff argued that by showing up to the march in black, moving through the streets with the group, and chanting anti-capitalist slogans, the defendants had willfully associated with a “riot.” The government charged the six with misdemeanor rioting, misdemeanor conspiracy to riot, and five felony counts of property destruction, charges which carry a maximum sentence of 50 years in prison.

Menefee-Libey and other J20 supporters are renewing their call on the Trump administration to drop the charges against the remaining 188 defendants. The next trial of seven J20 defendants on three misdemeanor charges — rioting, conspiracy to riot, and one count of property destruction — has no scheduled trial date, but D.C. Superior Court Judge Lynn Leibovitz will hold a status hearing on January 19. The next tranche of defendants facing the same felony and misdemeanor charges as those acquitted today is scheduled for March 5. Police officers pepper spray a group of protestors before the inauguration of Donald Trump Jan. 20, 2017, in Washington, D.C.

The J20 defendants had been arrested amid large protests of hundreds of thousands of people that descended on Washington on January 20. Throughout the day, protesters suffered abuses at the hands of the Metropolitan Police Department. Police indiscriminately pepper-sprayed crowds of protesters with Super Soaker-like dispensers. Riot cops flung stinger grenades into crowds of marchers, journalists, and legal observers. Some 234 people — among them those who were eventually charged in the J20 trials — were caught in a police line and arrested, despite local law in Washington specifically discouraged the use of the controversial mass arrest technique, known as a kettling.

The arrestees were trapped in the kettle for as much as nine hours, pushed against each other, and covered in painful pepper spray. They were denied food, water, and access to bathrooms. Those arrested included protesters, medics, legal observers, and some journalists. A handful were let go. Most were charged with a single count of felony rioting. Over 130 defendants signed on to “points of unity,” which insisted on the political nature of the charges and refused to accept cooperating pleas. When the majority of the defendants refused to plea, the U.S. attorney’s office returned a superseding indictment which charged 212 defendants with eight felonies, carrying a maximum sentence of 75 years in prison.

In the following months, some of those charges were reduced to misdemeanors and a few were dismissed. But the defendants in this case continued to face 50 years in prison for attending a protest — until today.

Liberal jurisprudence is supposed to hold as a fundamental value that individuals are responsible for their own concerted acts.

At every step of this prosecution, critics have said, the government has relied on undermining core principles of the American justice system that posit individualized suspicion and individualized punishment. Instead of identifying and arresting the handful of individuals breaking windows, the police indiscriminately arrested a crowd. Instead of individually charging those who engaged in criminal behavior, the state charged some 212 people — holding the entire group responsible for the acts committed by a select few. Yet liberal jurisprudence is supposed to hold as a fundamental value that individuals are responsible for their own concerted acts.

“Today’s verdict reaffirms two central constitutional principles of our democracy: first, that dissent is not a crime, and second, that our justice system does not permit guilt by association,” said Scott Michelman, a senior staff attorney with the ACLU’s Washington, D.C., chapter, in a statement applauding the verdict. “We hope today’s verdict begins the important work of teaching police and prosecutors to respect the line between lawbreaking and constitutionally protected protest.”

If the prosecution’s theory of the case had prevailed, it would have signaled that anyone who attends a protest at which criminal behavior takes place can be held responsible for that behavior — even if they did nothing but express their beliefs.

The acquittal is a vindication of the defendants’ decision to fight the charges as a group and refuse to submit to pleas, which by acknowledging guilt, undermine the message that these charges were politically motivated and unjust from the start. Menefee-Libey said, “This is what solidarity, perseverance, showing up for one another, bravery, and collective legal defense get us.”

Still, more legal battles loom for the nearly 200 remaining J20 defendants. “The challenge going forward will be to ensure that everybody else walks free, even the alleged window-breakers,” said the defendant who spoke anonymously with The Intercept. “A conviction for any defendant, no matter how allegedly culpable of vandalism, will send a signal that this whole fascist effort by the state and their auxiliaries in the far right was worth it. We can’t let them do that.”

Top photo: An anti-Trump protester holds her hands up as police officers lineup in Washington, D.C., on Jan. 20, 2017.