Five months after the deadliest human smuggling tragedy in more than a decade unfolded in his city, San Antonio Police Chief William McManus did something unusual: He opted to retain local control over a similar investigation, rather than hand the case off to his federal counterparts at Immigration and Customs Enforcement. In the process, the police chief released a dozen immigrants found in a tractor trailer from government custody and opened himself up to criticism from proponents of President Donald Trump’s hard-line immigration agenda.

According to a police report shared with The Intercept and comments McManus made to reporters Thursday, the story began on December 23, when an SAPD officer responded to a call regarding a suspicious 18-wheeler parked with its trailer door open. A man who identified himself as the owner of the truck was pacing around the vehicle, the responding officer reported. Inside the trailer, along both sides, were a dozen people — 10 men and two women. When the officer asked one of the men where he was from, the man responded, “Guatemala.”

By the time McManus arrived, the 12 individuals, suspected of being undocumented immigrants, were seated on a curb. Consistent with past investigations, special agents with ICE’s Homeland Security Investigations wing had already been notified. McManus said Thursday that he was at the scene “for probably a good hour and a half” before he made a highly uncommon call: Breaking with tradition, his department would handle the case on its own, pursuing it as a state-level smuggling investigation.

The driver, Herbert Alan Nichols, was arrested. Under questioning at police headquarters, the 58-year-old reportedly admitted to picking up the migrants at a warehouse in the border city of Laredo. Under the state smuggling charge, he could serve as many as 20 years in prison. Following interviews with detectives, the men and women found in the trailer, ranging from ages 16 to 41, were released to local organizations working on immigration issues. McManus told the press that his officers did not have the jurisdiction to hold the individuals and enforce immigration laws against them.

While McManus’s decision to handle the investigation in-house might seem less than noteworthy, layers of context suggest otherwise.

Veteran law enforcement officials say it’s virtually unheard of to see the San Antonio Police Department turn down ICE’s assistance on a smuggling investigation. “I can’t recall a situation like this, where the state [or] local chose to use a state statute instead of letting us work the case,” Jerry Robinette, a former special agent in charge of HSI in San Antonio, told The Intercept. “Look, if this was a car that was driving to the grocery store with two or three illegal aliens, I could understand this situation, but not a tractor trailer,” he added. Julian Calderas, a former deputy field office director in San Antonio for ICE’s Enforcement and Removal Operations, echoed Robinette’s view that turning over smuggling cases from local authorities to federal agents was standard practice. “I don’t think that I ever saw a situation where there was clearly organized smuggling that they didn’t,” Calderas told the San Antonio Express News.

The state smuggling charge McManus and his department chose to pursue in the case is similarly uncommon, at least in the frequency it has been used. At Thursday’s press conference, San Antonio District Attorney Nico LaHood said it was the first time the charge had been brought to his office since taking the job in 2015. The Express News reported the statute has only led to one conviction in Bexar County, where the truck was found, since it was signed into law in 2011. McManus said his decision to keep the investigation under the SAPD umbrella and pursue the state-level smuggling charge was “situational” and “based on a fairly fluid situation on the scene,” not the result of a change in policy.

“This is not necessarily the way every case is going to be handled going forward,” he said.

The San Antonio police chief’s careful description of his decision in December is likely linked to the tumultuous state of immigration enforcement politics playing out in Texas, which, in turn, reflects debates swirling around immigration policies nationwide. By noting that his decision was not part of any change in policy, McManus appeared to be making an effort to avoid any accusations that he was in violation of the controversial, newly passed Texas law, known as SB4, which penalizes public officials who oversee policies that prevent police officers from asking individuals about their immigration status. Although SB4 has been challenged in the courts, this particular provision remains in place. Locally, McManus is already facing pushback for his decision. Mike Helle, president of the union for San Antonio police officers, told the Express News, “If any one of our guys did this, any one of them, they’d probably be put on administrative duty and terminated from the Police Department.”

Across the country, and especially in Texas, police chiefs in larger cities have bristled at the Trump administration’s efforts to enlist local police in immigration enforcement — arguing that their officers are not trained to enforce federal law, and that questioning individuals about their immigration statuses erodes important relationships between local law enforcement and immigrant communities. These arguments have not stopped senior Trump administration officials from making the case that there should be consequences for public officials who fail to participate in the federal government’s immigration crackdown. Earlier this week, ICE Acting Director Thomas Homan called for the imprisonment of municipal lawmakers who do not cooperate with federal immigration authorities.

“We’ve got to start charging some of these politicians with crimes,” Homan said. 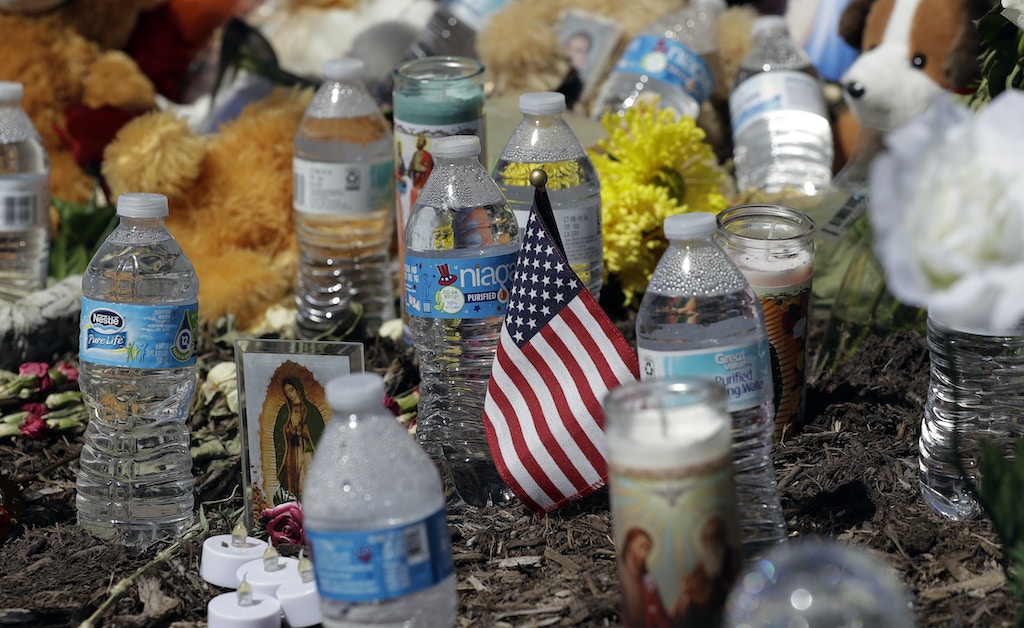 A U.S. flag, flowers, candles, and bottles of water help create a makeshift memorial in the parking lot of a Walmart store near the site where authorities had discovered a tractor-trailer packed with immigrants outside a Walmart, July 26, 2017, in San Antonio.

In his comments Thursday, McManus noted that the individuals recovered in December were found to be “well-fed, well-clothed, [and] well-hydrated.” That was not the case when one of his officers responded to a call in late July at a San Antonio Walmart regarding suspicious activity surrounding a tractor-trailer truck. There, the SAPD had found dozens of migrant men, women, and children clinging to life. They had been traveling for hours in the sweltering heat; the trailer’s cooling system had not been functioning, and they had shared a single hole in the wall to breathe through.

Ten people lost their lives as a result of the July trip. The driver, James Matthew Bradley, was arrested and initially faced the death penalty. The SAPD quickly handed the investigation over to ICE’s HSI special agents, and the U.S. attorney’s office for the Western District of Texas handled the prosecution. Survivors of the journey were detained as material witnesses, meaning they were held in the same for-profit jail as the driver. The treatment of the witnesses by the Department of Justice and federal investigators became a subject of frustration and, in some cases, outrage from their attorneys.

In an investigation by The Intercept, published in October, the lawyers described how their clients were cooperative throughout the investigative process; how HSI agents explained to them that special visas existed for individuals who cooperate with law enforcement; and how every effort to have them released from custody while their case proceeded was met firm resistance from the DOJ. In the end, the U.S. attorney’s office managed to flip Bradley — the threat of the death penalty was removed, and he faces sentencing this month — and a second alleged co-conspirator was charged in connection with the failed smuggling venture. Despite a certification from McManus’s SAPD asserting that the survivors were victims of crimes who cooperated with law enforcement, making them potentially eligible for specialized visas, the material witnesses were quickly handed over to ICE custody. No warning was provided to their attorneys, and the deportations began almost immediately.

Asked if the deportation of material witnesses in the July case informed his decision in December, McManus told reporters Thursday that it did not. “I don’t want to point fingers at any other agency,” he added. “We have a very, very, very good working relationship with HSI and intend to continue having a good relationship.” McManus said he met with the head of HSI in San Antonio that morning to discuss protocols for the handling of similar cases, though he would not say what those protocols include.

McManus did, however, add that his department was abiding by an agreement made with local immigrant rights organizations following the July tragedy to utilize a DOJ grant designed to help local law enforcement support victims in similar circumstances. Immigration advocates are hopeful that the police chief’s decision could mark a turn to a more compassionate, victim-centered approach in such cases. Whether such a shift is actually underway, or if it would survive the ultra-heated climate surrounding immigration enforcement politics, remains to be seen.

Top photo: San Antonio police officers investigate the scene where eight people were found dead in a tractor-trailer loaded with at least 30 others outside a Walmart store in stifling summer heat, in what police are calling a horrific human trafficking case, July 23, 2017, in San Antonio.