The recent protests are centered on the working class, not the educated demonstrators in Tehran. 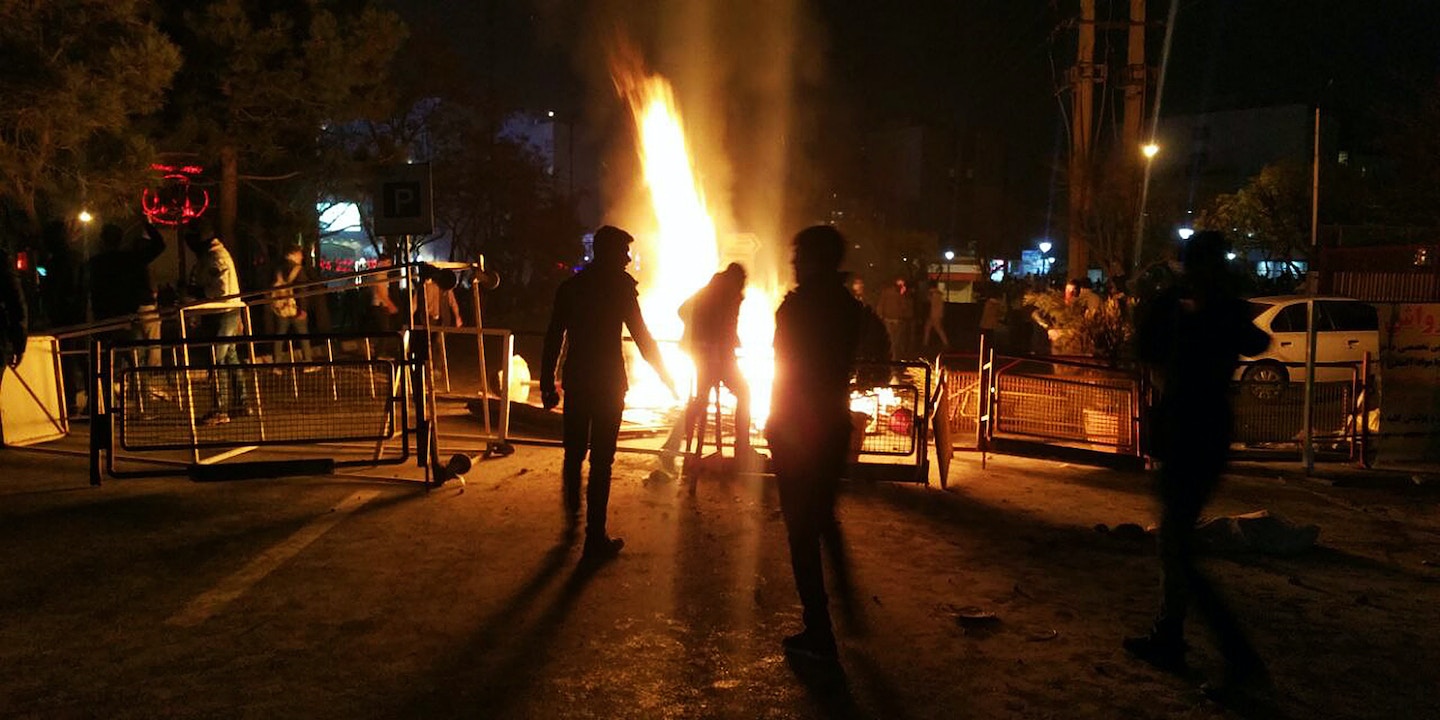 Over the past week, tens of thousands of people in dozens of cities across Iran have braved bullets and tear gas in a public outpouring of dissent against the country’s ruling establishment. Videos of demonstrations shared on social media have shown protesters smashing government-owned banks, tearing down posters of government officials, and at times calling for the end of clerical rule in the country. At least 22 people are reported to have been killed since the unrest began December 28, with human rights groups saying hundreds more were detained by security forces.

The outbreak and nature of the unrest have taken many analysts of Iranian politics by surprise. Rather than emerging from liberal Tehran, these protests appear to have originated in working-class conservative cities and towns that the Islamic Republic likes to depict as its core constituency. One group of people, however, has long expected such an outbreak of discontent from the economically disadvantaged people in these areas: Iranian labor activists.

“Working people in Iran have been dreaming of a better life for four decades, but today ordinary people often have to work two or three jobs simply to survive,” says Mehdi Kouhestaninejad, a longtime Iranian trade unionist now living in Canada, who is active in the international solidarity movement for workers’ rights in Iran. “Many people inside and outside Iran may be shocked by what is going on, but trade unionists have been warning for the past 10 years that there will be an uprising against the ruling class and their kleptocracy.”

Unlike the 2009 Green Movement, which was largely a product of the educated, urban Tehrani middle class, the recent protests in Iran appear to reflect the anger of the country’s working-class masses. As Iranians grapple with high inflation, unemployment, and economic corruption, the burden of these problems has fallen most heavily on young people who lack the political connections to survive, let alone raise their standard of living.

The latest protests also erupted from an unclear place in terms of Iran’s political spectrum: While the Green Movement was rallying around reformist politics and its leadership in Mir Hossein Mousavi, the latest protests have seen chants cursing just about every actor and political affiliation in Iran. There were frequent changes of “death to Rouhani” — referring to Iran’s reform-minded centrist president, Hassan Rouhani, whom young Tehranis have repeatedly poured into the streets to support. 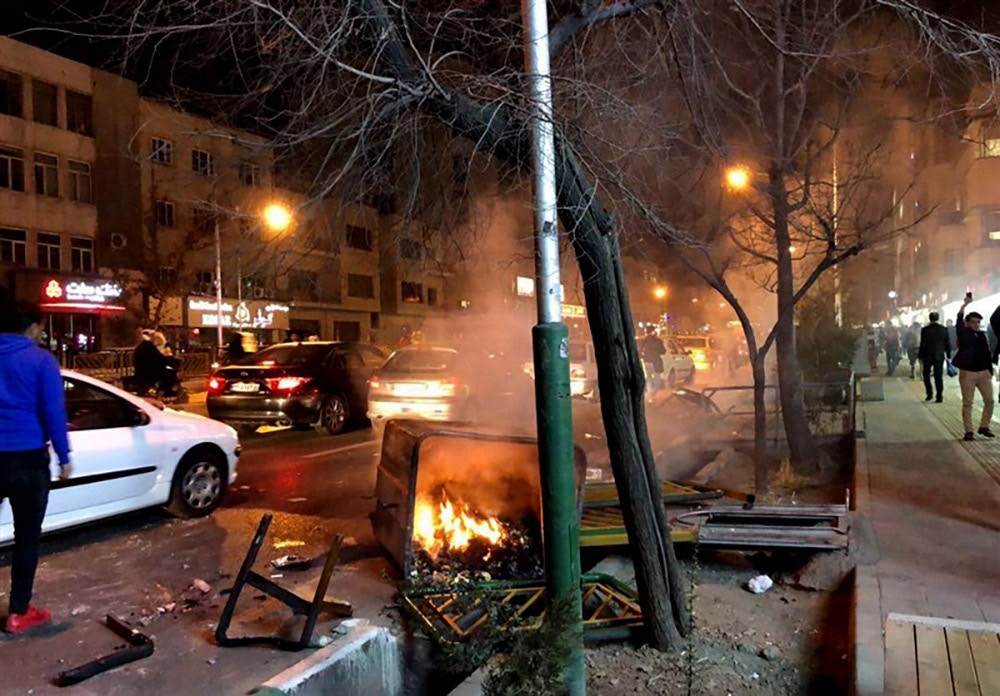 Unrest on the streets of central Tehran on Dec. 30, 2017, amid anti-government protests erupting across Iran.

In response to the protests, five Iranian labor organizations released a statement calling for “an end to poverty and misery” in the country and urging the government to enact economic reforms. But while labor groups have supported the protests, it is unclear to what extent they have been involved in actually directing them. The ability of independent civil society groups to publicly organize in Iran is greatly constrained by the government.

One of the few videos that has been released clearly articulating economic grievances against the government appears to have been an astroturf operation organized by the Islamic Revolutionary Guard Corps as a way of turning the unrest against their rivals in the Rouhani government.

Historically, however, workers’ movements in Iran have been an important center of power in the country. During the 1979 Iranian Revolution, labor organizers helped play a decisive role in the fall of the Pahlavi monarchy, particularly oil workers, whose decision to go on strike in the late days of the revolution brought the country’s economy to a halt and helped seal the fate of Mohammad Reza Shah.

Following the revolution, the new clerical rulers of the Islamic Republic quickly moved to marginalize labor groups. Today, the formation of independent trade unions is effectively banned in Iran, while labor rights activists are routinely detained and imprisoned by security forces. Workers today are allowed to organize government-approved Islamic Labor Councils, but the bodies are widely viewed as being coopted by the state and unable to effect genuine change.

The absence of genuine labor movements and the bargaining power that they provide has helped foster an increasingly unequal society. Although the Iranian economy is widely believed to have turned a corner following the lifting of international sanctions related to the country’s nuclear program, the resulting benefits have been unevenly distributed. For young, working-class people dealing with rampant inflation, unemployment, and income inequality, there is a growing sense of hopelessness about the future. The increasing militarization of Iranian society and takeover of components of the economy by the Iranian Revolutionary Guard Corps — an institution close to Iran’s Supreme Leader Ali Khamenei and other influential clerical bodies — have also created what the exiled labor activist Kouhestaninejad describes as a “mafia-like” atmosphere, in which the ability of working-class people to assert their rights has been tightly constrained.

“There is no transparency. We are dealing with a government in which no one knows who is who and every part of the economy is seemingly under the influence of the IRGC, which is running it like a mafia,” Kouhestaninejad says. “Meanwhile, there are millions of youths who cannot find a job, or when they find a job it is precarious and they have no job security. Oftentimes to work, they must sign a ‘white contract,’ which means that their employer can assign them any terms they want, with no negotiation.”

While the recent protests have garnered considerable international attention, labor activists and workers in Iran have been engaged in long-running battles over unpaid wages and benefits that predate the latest unrest.

In December, hundreds of workers at the Haft Tapeh sugar cane plantation in Shush, a city in southwestern Iran, launched a round of strikes and protests over unpaid wages that, by then, were more than four months late. While working-class demonstrators often lack the media savvy, language skills, and international connections available to Tehran-centric political opposition movements, workers at Haft Tapeh managed to get international attention for their fight through their affiliation with the International Union of Food and Allied Workers, a global trade union federation also known as IUF.

IUF representatives say that the recent unrest across the country was long expected and represents the culmination of grievances on the part of ordinary people in the country. “There is no need to speculate on the causes of the regular strikes and demonstrations like those at Haft Tapeh, and no need to search for foreign enemies stirring the pot. The current round of mass demonstrations is an authentic expression of frustration and anger,” says Peter Rossman, a spokesperson for the IUF based in Geneva. “Workers at Haft Tapeh have been compelled to hold strikes and demonstration since 2008 to feed their families. The ferocious repression against workers seeking to form unions explains why the frustration can only express itself in this form.”

“The ferocious repression against workers seeking to form unions explains why the frustration can only express itself in this form.”

The recent demonstrations represent the biggest public challenge to the Islamic Republic’s rule since the Green Movement. But it’s unclear what the future trajectory of these protests in Iran will be. Unlike the Green Movement, those who have taken to the streets in recent days have not won the backing of prominent members of the ruling establishment, nor have any identifiable leaders emerged.

According to the Iranian Interior Ministry, 90 percent of those detained across the country in recent days are under 25 years old – members of a generation that grew up under international sanctions and has little memory of the relative openness of the Islamic Republic under reformist President Mohammad Khatami. The apparent dissatisfaction of these working-class demonstrators stands as a significant challenge to the regime’s authority, given its proclaimed status as a defender of Iran’s conservative masses.

“Regardless [of] what happens going forward, the protests have proven two things: Areas of [the] country that the regime depicted as their base — small-town, conservative communities — are in fact very angry and very anti-regime,” says Hadi Ghaemi, executive director of the Center for Human Rights in Iran. “There is a lot of anger among young people who are children of the working class and went to university, but still find themselves unable to rise in Iranian society.”

In recent days, officials from the Iranian Revolutionary Guards Corps have announced plans to take control of the security situation in the country. As waves of demonstrations and arrests continue, the future of the protest movement may depend on whether a broader coalition forms that is capable of withstanding the coercive apparatus of the state.

To some degree, the economically based nature of the protests could potentially militate in the government’s favor by dividing the urban political opposition from the working-class conservative regions currently taking part in the unrest.

“None of the Green Movement supporters — who are mostly from the educated middle class — have come out in support of the protests, because they see more of a future in Rouhani’s policies than any other alternative, even if they are unhappy with the regime,” says Ghaemi. “The protests have a clear class dimension. They are coming from a segment of young people who feel they have nothing left to lose.”

Top photo: An Iranian protester is shot by police during demonstrations protesting high prices and the poor state of the economy under President Hassan Rouhani, in Dorud in Lorestan Province, Iran, on Dec. 30, 2017.