Oprah Winfrey for President: Have We All Gone Bonkers?

After a stirring speech at the Golden Globes, Winfrey was discussed as a candidate to face Donald Trump in 2020. But we don’t need another celebrity president. In this handout photo provided by NBCUniversal, Oprah Winfrey speaks onstage during the 75th Annual Golden Globe Awards at the Beverly Hilton Hotel on Jan. 7, 2018 in Beverly Hills, Calif.

Have we all gone bonkers?

On Sunday evening, #Oprah2020 began trending on social media after Oprah Winfrey delivered a rousing speech against misogyny and racism at the Golden Globe Awards. While Oprah has in the past ruled out running for public office, her longtime partner Stedman Graham just told the Los Angeles Times that “she would absolutely do it,” and CNN is reporting that Oprah is “actively thinking” about running for president.

Is #Oprah2020 really a serious thing? Do people honestly consider the talk-show-host-turned-media-mogul to be a viable or appropriate candidate to run against fellow celebrity billionaire Donald Trump in three years? “I have no idea if Oprah would be a good candidate or president,” former Obama speechwriter Jon Favreau wrote on Twitter, “but dismissing her out of hand because Trump is a celebrity seems short-sighted.”

Really? I’m old enough to remember when liberals gave a damn about experience, qualifications, and judgement; when Democrats mocked the idea of Trump — a former reality TV star and property developer who struggled to tell the difference between Hamas and Hezbollah — running for the presidency.

On the campaign trail, former President Barack Obama blasted Trump as “uniquely unqualified,” lacking in “basic knowledge” and “woefully unprepared” to do the job of commander-in-chief. In stark contrast, he argued, there had “never been a man or a woman more qualified than Hillary Clinton to serve as president of the United States of America.” 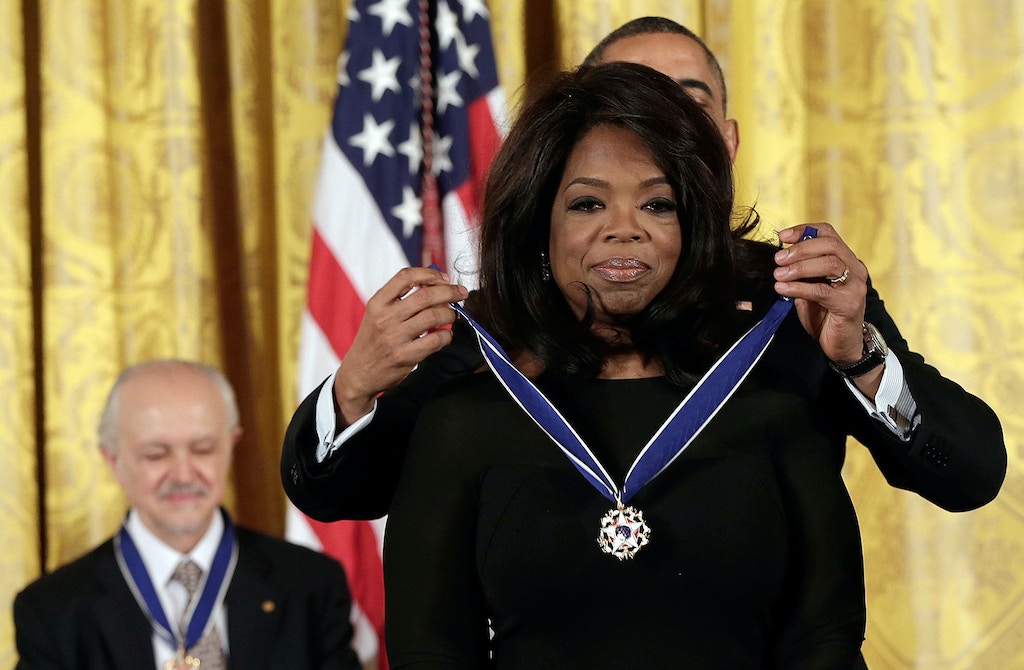 President Barack Obama awards the Presidential Medal of Freedom to Oprah Winfrey in the East Room at the White House on Nov. 20, 2013 in Washington.

Clinton called Trump “totally unqualified,” while an op-ed from the New York Times editorial board, headlined “Why Donald Trump Should Not Be President,” pointed out that the GOP candidate “has no experience in national security.” Three days after the election, Vox ran a piece headlined, “Donald Trump is the only U.S. president ever with no political or military experience.”

Well, dear liberals and Democrats, guess what? President Winfrey would be the second such president. Is this really what most Americans want or what the United States government needs? Another clueless celebrity in possession of the nuclear codes? Another billionaire mogul who doesn’t like paying taxes in charge of the economy? And how would it be anything other than sheer hypocrisy for Democrats to offer an unqualified, inexperienced presidential candidate to the American electorate in 2020, given all that they said about Trump in 2016?

Granted, Oprah isn’t a raging narcissist or a racist bigot; she doesn’t have ties to white nationalists, isn’t accused of colluding with a foreign government, and hasn’t been caught on tape admitting to sexual assault. Oprah would be a far superior, smarter, and more stable president than Trump in every imaginable way. But that, of course, is a low, low bar.

As CNBC’s Christina Wilkie, in a rare dissent on Twitter, put it: “I love to watch Oprah saying inspirational things on television. But also I love to watch people who have political experience being elected to national office.”

What about former Hollywood actor Ronald Reagan, some Oprah supporters might say? The Gipper, however, was also a former two-term governor from California. Obama, also accused of being a political lightweight when he ran for president, was a sitting senator, former constitutional law professor, and author of two acclaimed books on politics and policy. Even the know-nothing George W. Bush had won two gubernatorial elections in Texas before throwing his hat in the presidential ring in 2000.

Prior to Trump, the only presidents to never have served in public office prior to being elected to the White House were Zachary Taylor, Ulysses S. Grant, and Dwight Eisenhower. The first won the Mexican-American War; the second, the Civil War; and the third, the Second World War.

Does Oprah have anything on her resume to compare with that? Is emoting on TV and handing out free cars — even if it is, admittedly, part of building an impressive multi-billion-dollar media empire from scratch — really an acceptable substitute for political or military experience? Is that how debased the political culture has become? Oprah Winfrey poses at the inaugural graduation of the class of 2011 at Oprah Winfrey Leadership Academy for Girls on Jan. 14, 2012 in Henley on Klip, South Africa.

Do I sound elitist? Perhaps. But what’s wrong with wanting people with intellect, experience, and qualifications to fill the most important jobs? As Oprah’s fellow celebrity liberal Jon Stewart once said: “Not only do I want an elite president, I want someone who’s embarrassingly superior to me, somebody who speaks 16 languages and sleeps two hours a night hanging upside down in a chamber they themselves designed.”

Well, the Oprah fans might argue, she could surround herself with big brains. But isn’t that the argument that Trump supporters make, too? Do we really want another president deferring to unelected generals and Goldman Sachs? And do we think a talk-show host who promoted the careers of hucksters Dr. Phil and Dr. Oz, while also giving a platform to the anti-science lunacy of actresses Jenny McCarthy and Suzanne Somers, is capable of constructing a Lincoln-esque “Team of Rivals”? A political and economic “Justice League?” Come. Off. It.

To be clear: I am not saying that Oprah can’t, or won’t, be president. Predictions are for fools, and Trump has proved that anything is possible.

Oprah’s supporters — rightly — might point to her strong record on standing up to racism and misogyny, not to mention her inspirational oratory and backstory. Her record on Iraq is better than Clinton’s; she once even hosted a show on universal health care with Michael Moore. It might also seem like an act of divine justice if Trump, hero to white nationalists and neo-Nazis, was replaced by a strong black woman.

Oprah’s critics — also rightly — might point to her fronting for global corporations and her role as “one of the world’s best neoliberal capitalist thinkers.” They might ask: What is Oprah’s position on drone strikes in Pakistan? On supporting the Saudi war in Yemen? On cap and trade? Single-payer? Tax reform? Does she have a plan for Middle East peace? Could a person who once seemed surprised that Indian people still “eat with their hands” really defuse a nuclear crisis on the Indian subcontinent?

But we have to go beyond the pros and cons of an Oprah presidency — I can’t believe I just typed that line — and consider some broader questions: How much damage is U.S. celebrity culture doing to U.S. politics? Why don’t ideologies, or even ideas, seem to matter anymore? Shouldn’t progressives be making the case for the virtues of government and collective action and, therefore, the importance of electing people of ability, experience, and expertise to high office? Shouldn’t they be arguing that billionaire TV stars have no business running for the most powerful job on planet Earth, regardless of whether they are an orange man called Trump or a black woman called Oprah?

Some pundits have suggested that the Democrats can’t win without a celebrity candidate like Oprah in 2020. “If you need to set a thief to catch a thief,” neoconservative John Podhoretz wrote in a New York Post op-ed in September 2017 that was retweeted by Oprah herself, “you need a star — a grand, outsized, fearless star whom Trump can neither intimidate nor outshine — to catch a star.”

If five different senators plus a Generic Democrat can beat this Republican president, then why the liberal excitement over a talk-show host? And why draw the line at Oprah? What about Mark Zuckerberg? Mark Cuban? Dwayne “The Rock” Johnson? Kanye? Where, oh where, does it end?

The liberal response to the rise of Trump cannot and should not be “let’s find our own bigger, better version of The Donald.” As columnist Emily Arrowood wrote in May 2016: “That Trump is acutely unqualified would be true even if he were Mr. Congeniality, a champion of the people with the aspirations of Jimmy Stewart in ‘Mr. Smith Goes to Washington.’”

The irony is that Oprah may, in fact, be Ms. Congeniality. But she is still as “acutely unqualified” as Trump. Let’s get a grip, folks.