This week, the Trump administration announced that it would soon end a program that gives many immigrants from El Salvador protection from deportation. In revoking Temporary Protected Status, or TPS, for Salvadorans, administration officials claimed that the impetus for the designation — devastating earthquakes in 2001 — no longer justified its continuation.

With this logic, the officials avoided the main reason that Salvadorans are afraid to return: the gang violence that has made their country one of the most dangerous places in the world. The majority of Salvadoran TPS recipients have been in the United States for more than 20 years, and the El Salvador that Trump would have them return to presents a perilous new landscape.

Last spring, photographer Natalie Keyssar took photos of youth in gang-controlled neighborhoods of El Salvador’s capital, San Salvador. These young people are trapped between the notorious gangs MS-13 and Barrio 18 — both of which rose to power in the country when their leaders were deported from Los Angeles in the 1990s — and an indiscriminate crackdown from security forces, carried out with U.S. support, which is making the violence worse. Birds fly through a housing project in gang-controlled Zacamil, a neighborhood in San Salvador, the capital of El Salvador. In the top photo is Wendy Morales, a social activist who teaches indigenous language and art. She spent a month incarcerated among gang members after a used cellphone that she had was linked to a gang extortion case. When international organizations came to her aid to get her out of jail, she devoted herself to activism against wrongful imprisonment and police abuse. All photos were taken in April, 2017. Kenya, 13, holds her pet parrots on her arm at her home outside of San Salvador. She said she had just moved to the community of new cinder-block, three-room houses built with church donations because her old neighborhood was too dangerous.

Kids in El Salvador face well-documented threats at the hands of gangs, from extortion to forced recruitment as members or “girlfriends” of members. Being a witness to a gang murder, or just being in the wrong part of town or on the wrong bus line, can get you killed.

Increasingly, they also face violence from police. Poor youth are rounded up on suspicion of being gang members, hassled, imprisoned, and, in some cases, killed. Shakedowns and cellphone seizures are common. Activists say police regularly plant evidence and rely on flimsy allegations of gang affiliation. Beyond physical violence, there is widespread economic and social stigma against people from areas where gangs have a robust presence. On the left, flowers grow over a murder scene in Colonia Londres in San Salvador. Right, a girl poses for a photo on a Saturday morning after a school program.Photos: Natalie Keyssar

For youth from poor neighborhoods, it’s impossible not to interact with the gangs in some way, said Tatiana Alemán, a journalist who became an activist after her younger brother was detained on false gang charges. “We’ve known these people since we were little,” she said. “But if the police see you with them – forget it, they’ll accuse you of collaborating.” A Salvadoran police officer’s weapon bears the name of his country.

Many young Salvadorans now say they fear the police as much as any gang. Meibi, a young woman from Zacamil, a Barrio 18 stronghold in San Salvador, said she is regularly harassed by police. She can’t leave the neighborhood because her address on her ID causes people to assume she’s in the gang. In April, a few days after Keyssar photographed Demo, the stage name of a young rapper from Zacamil, he was arrested in a dragnet sweep after the killing of a police officer. He was acquitted three months later, but he still fears that the police will seek retribution because they believe he is guilty. (The Intercept is withholding the last names of the Salvadoran youth for their protection.)

Demo said he’s witnessed the murders of two friends — one by police, and one by gangs. “I’ve lost track of how many people I’ve seen killed in front of me,” he said in April, before his arrest. “They say violence creates more violence, but I’m trying not to be that way. The two gangs separate the whole country. Here in Zacamil, sometimes the borderlines are two houses that touch each other. I just want people to see us as people.” 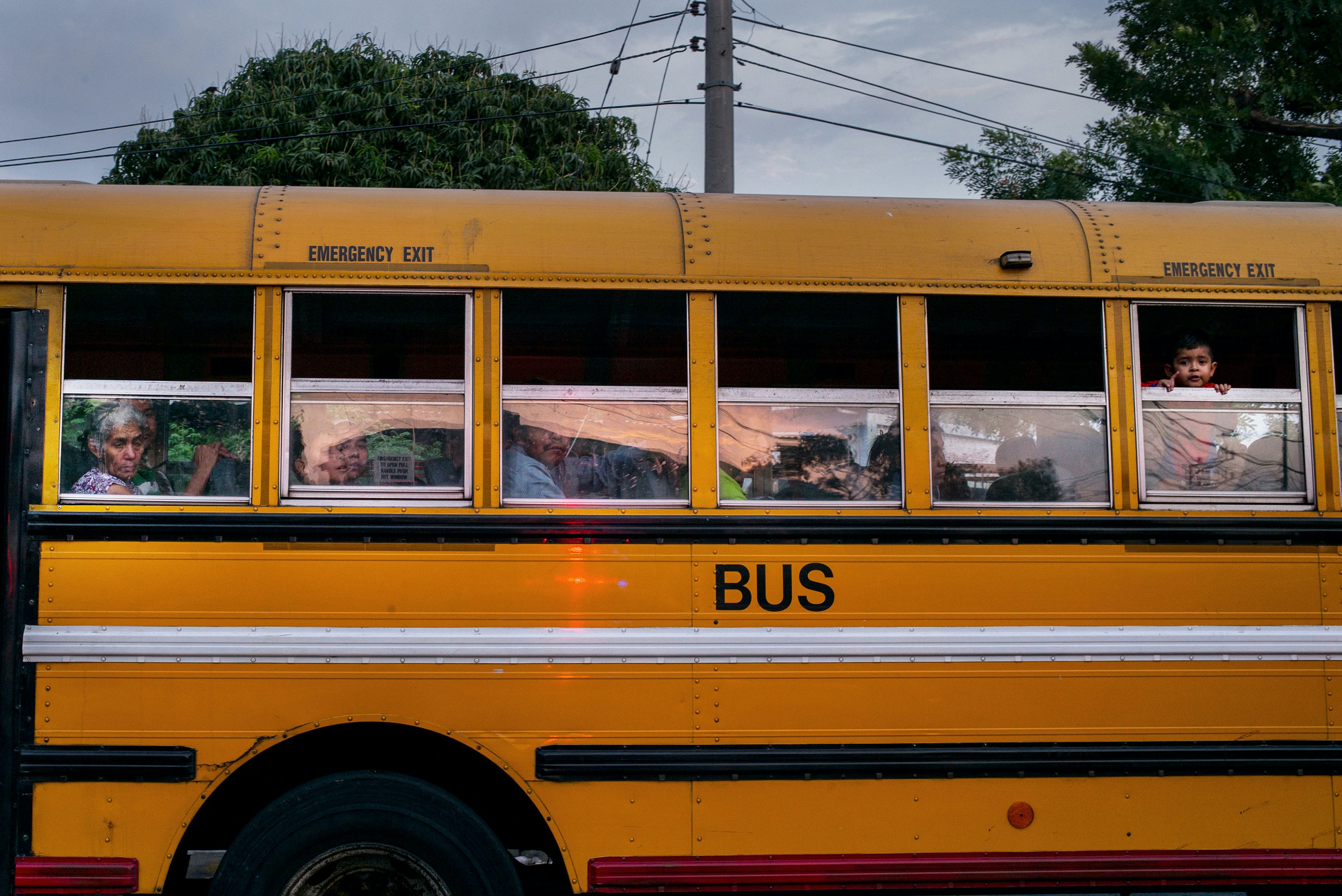 Children look out the window at the scene of what police said was a gang assassination of a young women who had been waiting for her daughter to get out of school in San Salvador.

This pressure from all sides in some areas is suffocating. Talk about gangs and people’s voices drop suddenly, referring obliquely to “numbers” (Barrio 18) and “letters” (MS-13). To enter a gang neighborhood, outsiders generally need an escort and must roll the windows of the car down to identify themselves. Lookouts trail visitors, and everyone is on edge. At an event put on by the mayor of San Salvador in a gang-controlled barrio, local skaters show off their skills. Skating and other cultural activities attempt to create a space for youth that is not gang-related.

Twelve-year-old Daniela said she is only allowed to leave the house to go to school or play soccer; her parents think it’s too dangerous otherwise. As children made cookies and practiced a dance routine at a community center in the neighborhood of San Roque this October, one of the mothers confided that she had started volunteering just to get out of the house: “There are no safe places. I was always alone; my daughter was always stuck inside.” Earlier that week, one of the other volunteers had been murdered on her way to pick up her child. On the left, a baby pool in the heat of the day in Tonacatepeque, San Salvador. On the right, Natalie, 15, poses for a portrait near the soccer field she used to play on in her neighborhood of San Salvador. “I had a friend who was really pretty once,” she told Keyssar. “Karin. She was 15. A gangster wanted her, but she rejected him. He took her one day. After that, they found her dead.” At the same time, several of her brothers are gang members, and her family lives in constant fear that they will be attacked by police.Photos: Natalie Keyssar

Such pressures have contributed to the surge in youth trying to leave Central America and reach the southern U.S. border to ask for asylum or cross illegally. Those children aren’t eligible for TPS, the program Trump just cancelled. But many have family members in the United States who were in those or other immigration programs, on whom they depend for financial and other support. Each of Trump’s policies narrowing options for refugees and other migrants has ripple effects. 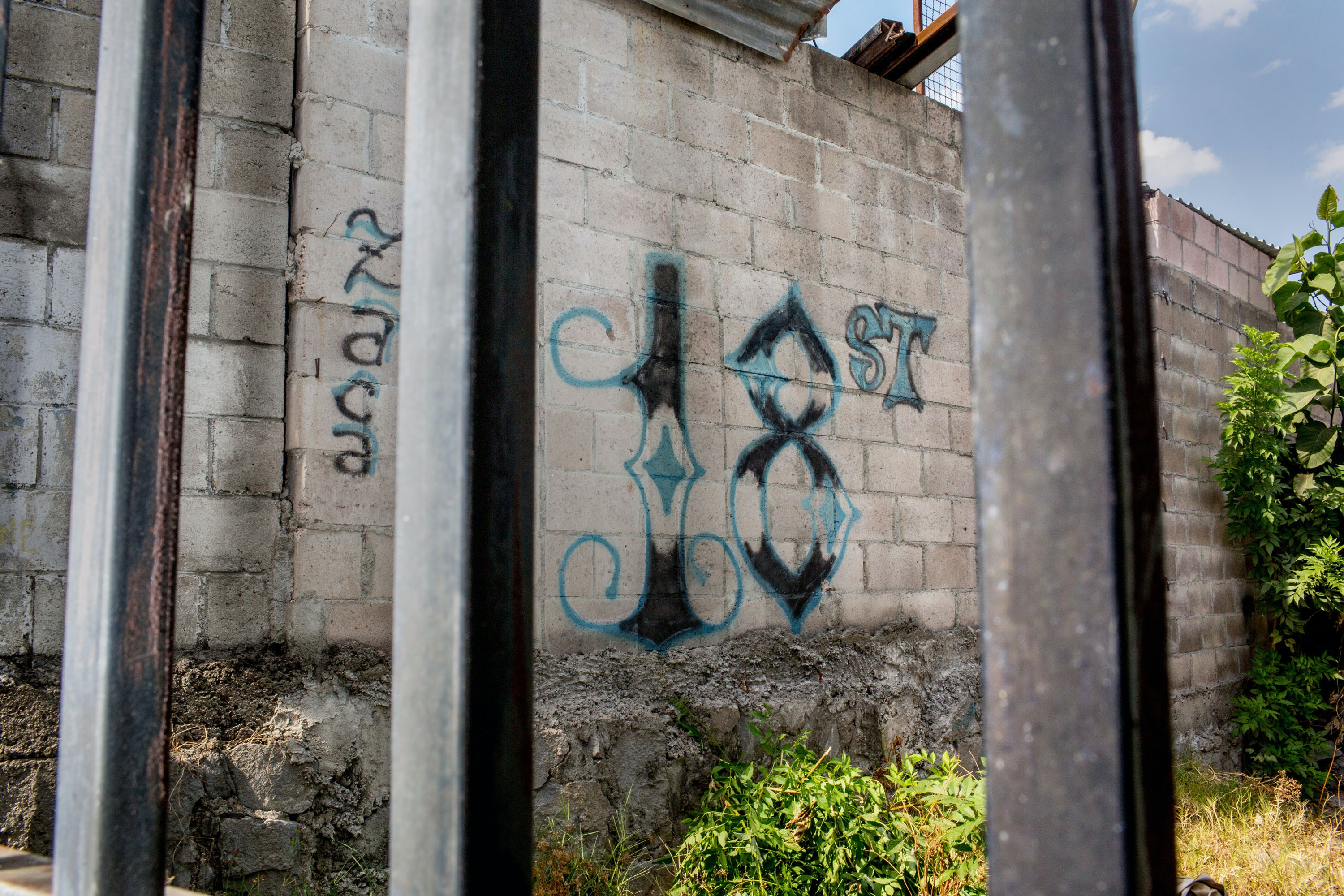 At an event held by a legal aid organization in Los Angeles on Monday night, after the TPS announcement, Stephanie, a 21-year-old U.S. citizen, sat with her father, Mario, a TPS beneficiary who has been in the  United States since 1993. (The pair asked to be identified by their first names only.) Stephanie’s cousins in El Salvador tell her stories about extortion and beatings. “They don’t go outside because they are afraid,” she said.

“Imagine if someone with TPS has kids here, and they have to take them back to El Salvador,” she continued. “No one is prepared for that drastic change. They’d be depressed, afraid.” 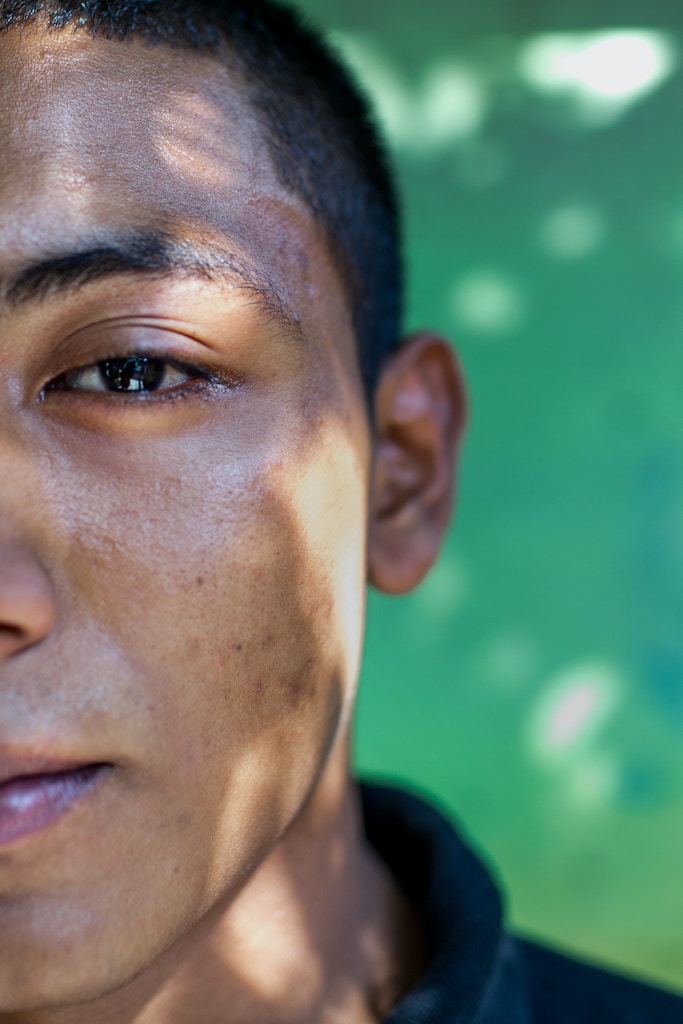 A young rapper who goes by the name Demo decides to only reveal part of his face in a photo. He teaches other youth and said that while he is surrounded by gang activity, he wants to pursue music.

Staying in El Salvador means adapting — and resisting. Alemán and her mother started a Facebook page connecting the victims of police violence and unlawful detention, called “Los Siempre Sospechosos de Todo” – something like “the usual suspects.” (It takes its name from a line by El Salvador’s most famous poet, Roque Dalton, which protests the criminalization of poor Salvadorans.) Los Siempre Sospechosos stages performances and plasters the city with the faces of victims of police abuse.

“We want to inspire people,” Alemán said, “to generate a culture where these things are denounced.” 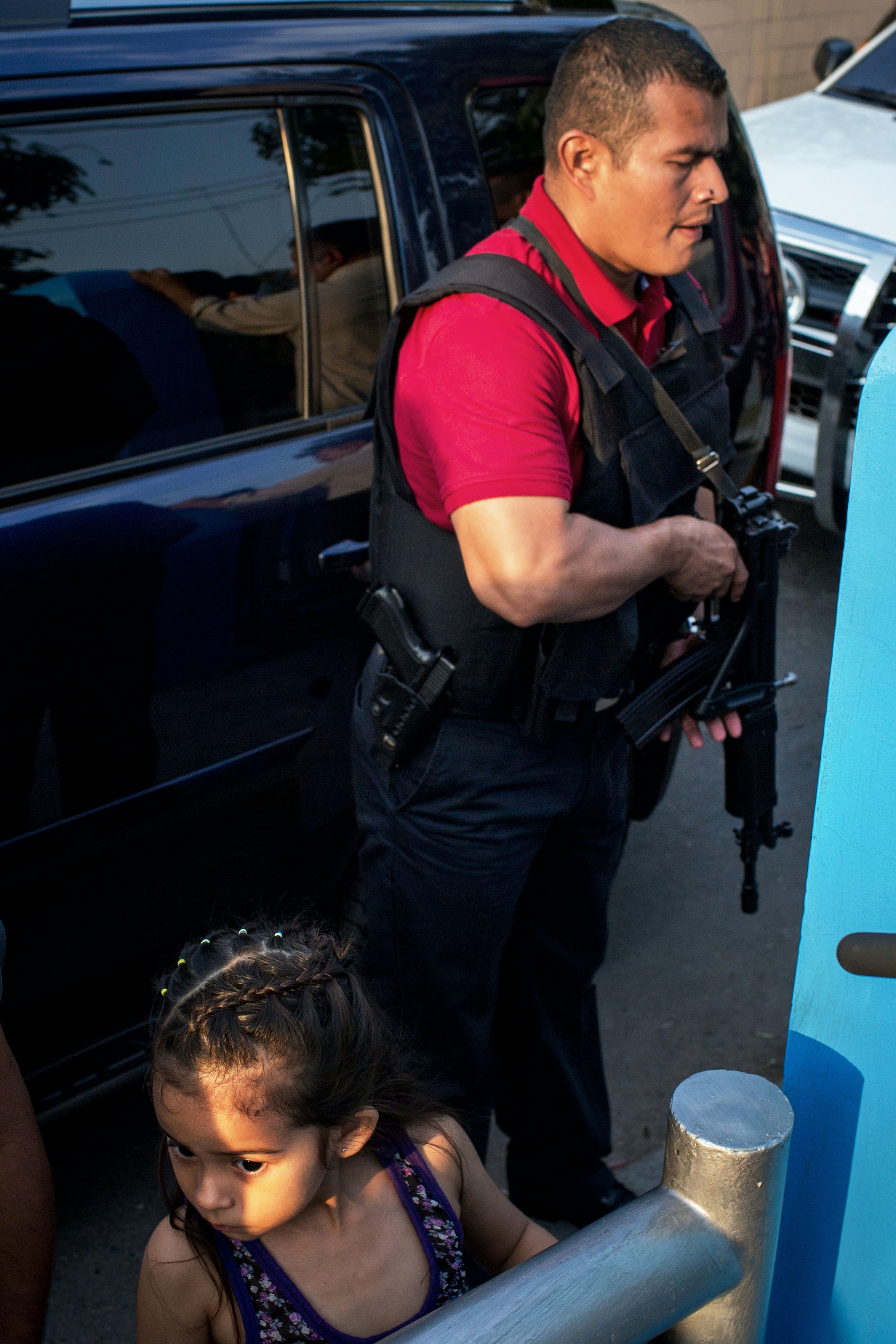 A security guard for the mayor of San Salvador works in Colonia Iberia. Daniela, 12, said she only leaves the house to play soccer or go to school. An effigy of Judas hangs in the notorious Barrio 18-controlled neighborhood of Mejicanos the night before Easter Sunday.

Others are organizing spaces where kids can escape the endless crossfire between police and gangs. Seated on the edge of a skate ramp in a park in April, Alejandro spoke about the origins of his informal collective of creative types, which brings artistic programs to Zacamil. He spends his days teaching grade-schoolers (some of them the children of gangsters) to paint, skating with teenagers while discussing police brutality, and cultivating relationships with organizations that can help his collaborators when they get in trouble. Growing up in gang-controlled areas has helped him understand the needs of a community that has been painted with a broad brush as “violent and hopeless.”

“The very violence which we are fighting is what made my mind evolve to where it is today,” Alejandro explained. “We have to rescue the human side of the people of the street, we have to understand that the streets give them the sense of family they don’t have at home.” A woman who police say was assassinated by gang members while waiting to for her child to get out of school in San Salvador.

Reporting for this piece was supported by the International Women’s Media Foundation. Natalie Keyssar and Cora Currier were Adelante Reporting Fellows with the foundation in El Salvador in April and October 2017, respectively.

Correction: Jan. 15, 2018, 9:19 a.m.
The caption for the top photo in this story originally misidentified its subject: the woman pictured is Wendy Morales, not Wendy Gonzales. The caption also originally stated that Morales purchased the cellphone that was linked to an extortion case, and that she spent four months in prison; in fact, Morales says that the phone was given to her and that while she was threatened with four months, she only served one.