The current iteration of the TPS program for El Salvador has been in place for nearly 20 years, and many of its beneficiaries have American families. 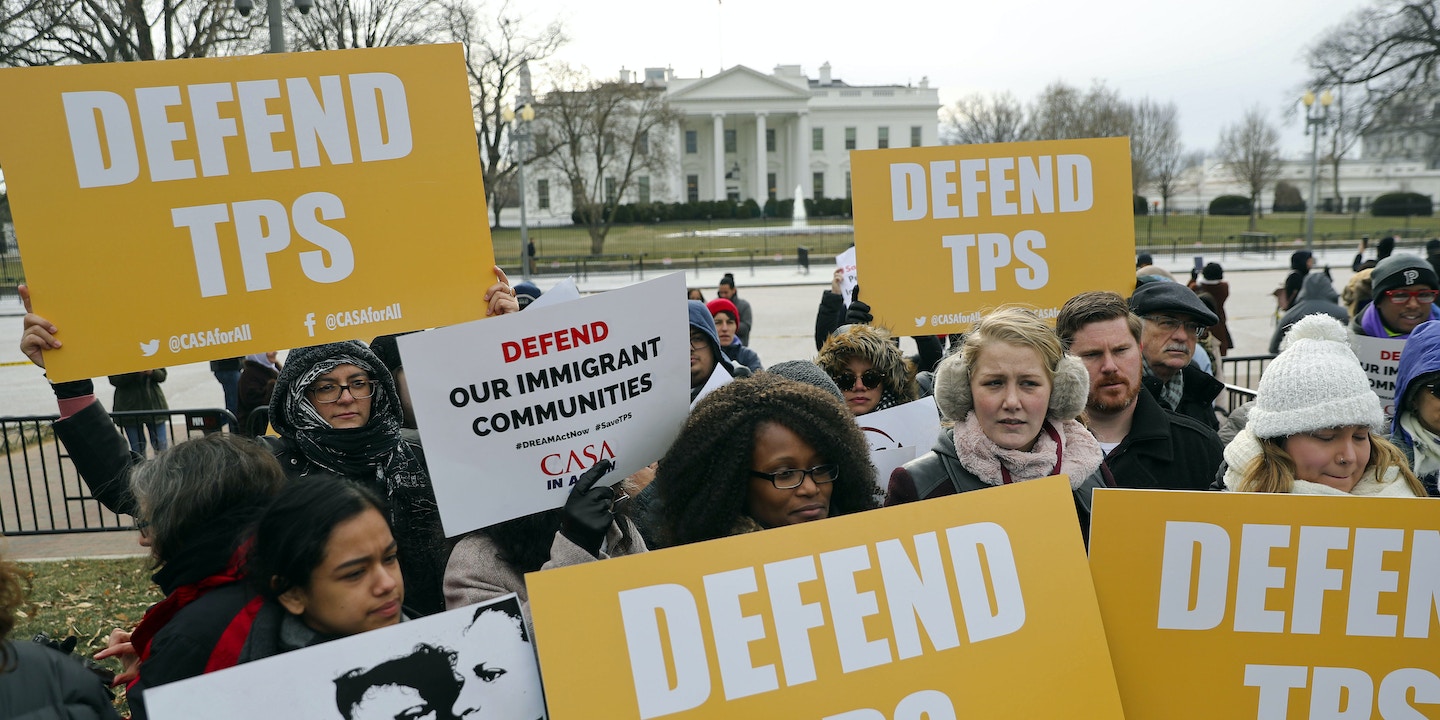 In a move likely to upend the lives of hundreds of thousands of families across the United States, the Trump administration announced Monday that it is ending a program designed to provide protection to a large number of immigrants from El Salvador currently living in the country. Once implemented, the cancellation could see waves of people who have lived in the U.S. for generations deposited in one of the most dangerous places on Earth.

More than 262,000 Salvadorans currently have Temporary Protected Status — or TPS — in the U.S., allowing them to live and work in the country legally. Studies show that more than half of the Salvadoran beneficiaries, by far the largest group to receive TPS, have lived in the U.S. for 20 years or more, working jobs, paying taxes, and raising families — an estimated 192,700 American citizens are the children of Salvadoran TPS recipients.

On September 9, 2019, the protections that allowed for those lives to be built will come to an end, the Trump administration said Monday in a statement. With the cancellation of TPS, Salvadoran families from coast to coast will be forced to make painful decisions: send their loved ones back to one of the planet’s most violent countries, devise new means to secure protection from an overburdened U.S. immigration system, or go underground in hopes of evading the president’s increasingly aggressive immigration enforcement agencies.

“Any decision to end TPS is thoughtless and cruel, and it would achieve nothing but splitting apart families like mine.”

Rodman Serrano, a Salvadoran-American member of the immigration advocacy group Make the Road New York, is the son of TPS-recipient parents. He is also a resident of Long Island, an area where violence against Salvadoran immigrants at the hands of Salvadoran gangs has been particularly acute. “We are one of thousands of Salvadoran families with TPS who call Long Island home,” Serrano said in a statement Monday. “As the child of immigrants, my parents have given me the tools and support to attend college and to pursue my dreams.”

“Any decision to end TPS is thoughtless and cruel, and it would achieve nothing but splitting apart families like mine,” he added.

The decision to cancel TPS for Salvadorans is part of a broader campaign targeting the program, which previously included the end of protections for tens of thousands of citizens from Haiti, Nicaragua, and Sudan currently living in the U.S.

In a phone call with reporters Monday, senior Trump administration officials sought to portray the decision as merely the result of a program that had run its course. The latest iteration of TPS designations for Salvadorans began in 2001, after a pair of earthquakes devastated the country. The program has been renewed continually since then and, in the view of many immigration hawks, become an unnecessary burden on the U.S. government.

The Department of Homeland Security “considered a wide variety of information when making this decision,” a senior administration official said during Monday’s press call, adding that “following the 2001 earthquakes, El Salvador received a significant amount of international aid to assist in its recovery efforts, including millions of dollars dedicated to emergency and long-term assistance. Accordingly, many reconstruction efforts have now been completed — damaged schools and hospitals have been reconstructed and repaired, homes have been rebuilt, and money has been provided for water and sanitation and to repair damaged roads and other infrastructure.”

The official, speaking on condition of anonymity for no discernible reason, provided no evidence for the claim. In 2016, the World Bank reported that while “economic growth in El Salvador reached 2.4 percent,” the country remained “the slowest growing economy of Central America.” The Trump official added that the TPS decision followed conversations with political and diplomatic stakeholders in El Salvador, as well as Salvadoran community groups in the U.S., though he declined to characterize what sort of feedback the administration received from those parties.

Salvadoran officials, including President Salvador Sánchez Cerén, appealed to DHS Secretary Kirstjen Nielsen as recently as last week not to go through with the decision, arguing that it would wreak havoc on El Salvador’s economy. The tiny Central American nation relies heavily on remittance payments sent from Salvadorans living in the U.S. to their family members back home.

The long-anticipated decision was met with outrage among immigration advocates and supporters. In a statement, Rep. Luis V. Gutiérrez, D-Ill., said, “The White House is peddling a fantasy where hundreds of thousands of people who have established their lives, families, and businesses in the U.S. for decades will leave or can be rounded up and deported.” Students of the National Institute Francisco Menendez participate in an earthquake drill in San Salvador on Oct. 10, 2017.

By pointing to earthquake recovery efforts alone, the Trump administration appears intent on keeping the conversation about the end of TPS confined to the justifications for starting the program in the first place. In doing so, however, consideration of other critical factors related to conditions on the ground in El Salvador are conspicuously avoided, including, in particular, violence and instability.

The recent history of the U.S.’s relationship to El Salvador is laden with sweeping decisions made in Washington or other American cities. The decisions and policies frequently overlook or dismiss second- and third-order effects, creating new problems the governments of both countries are forced to grapple with years down the road.

In the 1980s, for instance, the U.S. backed the Salvadoran military and its death squads in a brutal counterinsurgency campaign that left tens of thousands of people dead or disappeared. The civil war helped fuel an exodus of refugees to the U.S., with many Salvadorans landing in cities like Los Angeles — the first use of TPS was, in fact, designed as a protection for Salvadorans fleeing the conflict. Growing up in struggling communities, some first-generation Salvadorans came together to protect themselves against American street gangs, sparking the creation of Salvadoran criminal groups such as Mara Salvatrucha, otherwise known as MS-13.

The so-called Northern Triangle, which includes El Salvador, Honduras, and Guatemala, has been routinely described as the most violent region of the world outside of conventional war zones.

Following the end of the civil war in the early 1990s, the U.S. began deporting Salvadorans in large numbers. With El Salvador’s weak institutions incapable of responding to the influx of violent actors, gangs like MS-13 steadily gained power in El Salvador itself, which in turn gave rise to an increasing number of Salvadoran civilians fleeing to the U.S. border seeking asylum. The cycle was evident in a surge of Central American refugees arriving at the U.S. border during the Obama administration, many of them Salvadoran families and unaccompanied children.

In recent years, the so-called Northern Triangle, which includes El Salvador, Honduras, and Guatemala, has been routinely described as the most violent region of the world outside of conventional war zones. The inability of the Salvadoran government to protect its people — not only from gangs but also from its own unaccountable security forces — is a critical factor in why TPS recipients and their advocates have argued for the program to remain in place. Indeed, gang violence was among the factors the U.S. government cited in renewing TPS for Salvadorans in 2016, and there is scant evidence to indicate a dramatic improvement on that front in the year since.

The Trump administration has been more than willing to point to the existence of groups like MS-13 as justification for an immigration crackdown that includes the targeting of virtually all of the nation’s 11 million undocumented immigrants. At the same time, however, the threat that those criminal groups would pose to individuals returned to El Salvador — individuals who have raised families in the U.S. and contributed to society and the American economy — apparently mattered little in the TPS deliberations.

In Monday’s call with reporters, the Trump administration official was explicit in saying that violence and instability in El Salvador was not part of the calculus in deciding to end TPS — it was earthquake recovery and earthquake recovery alone. “Anything else doesn’t really apply,” the official said. When asked if it was the administration’s position that families with mixed citizenship status should expect to return to a country frequently called the murder capital of the world, the official had no advice: “We’re not getting involved in individual family decisions.”

Correction: Jan. 9, 2018, 11:09 a.m.
An earlier version of this story referred to the Golden Triangle region of El Salvador, Honduras, and Guatemala. In fact, the area is called the Northern Triangle.

Top photo: CASA de Maryland, an immigration advocacy and assistance organization, holds a rally in Lafayette Park, across from the White House in Washington, Jan. 8, 2018, in reaction to the announcement regarding Temporary Protective Status for people from El Salvador.