Why are establishment Democrats so determined to prevent the first transgender woman from becoming a U.S. senator?

Over the weekend, Chelsea Manning announced her candidacy for the U.S. Senate by posting a video outlining the broad themes of her campaign. Manning, a whistleblower who served seven years in a U.S. military brig for exposing systemic U.S. war crimes, was held under prison conditions so brutal that the United Nations formally denounced them as “inhumane.”

While her whistleblowing made her a hero around the world, Manning has also now become an icon of LGBT equality and transgender rights with an act of profound bravery that at least matches, if not surpasses, her whistleblowing. She announced her transition and demanded the dignity and treatment to which she was entitled, while she was imprisoned in the middle of a sprawling U.S. military base, in a brig at Fort Leavenworth, Kansas.

Since her release from prison, she has become a visible and outspoken advocate for the rights of trans people. She has used her position as a Guardian columnist to stake out a wide range of positions, including drafting a proposed law to provide protections for whistleblowers. She certainly has more political experience and activism than many other Senate candidates previously supported by the Democratic establishment (Al Franken comes to mind as one example). If elected, Manning would become the first transgender woman ever, and the youngest woman ever, to serve in the U.S. Senate.

Manning’s opponent in the Democratic Party primary is one of the most standard, banal, typical, privileged, and mediocre politicians in the U.S. Congress: Benjamin Cardin, a 74-year-old white, straight man who is seeking his third six-year Senate term. Cardin’s decadeslong career as a politician from the start has been steeped in unearned privilege: He first won elective office back in 1966, when his uncle, Maurice Cardin, gave up his seat in order to bequeath it to his nephew Benjamin. With this dynastic privilege as his base, he has spent the last 50 years climbing the political ladder in Maryland.

Cardin has remarkably few achievements for being in Congress for so many years. One of his few distinctions is that he has become one of the Senate’s most reliable and loyal supporters of AIPAC’s agenda and the Israeli government, if not the single most loyal. In 2015, he joined with Lindsey Graham in kicking off the annual AIPAC conference, causing neocon columnist Jennifer Rubin to gush about how identical they sounded. 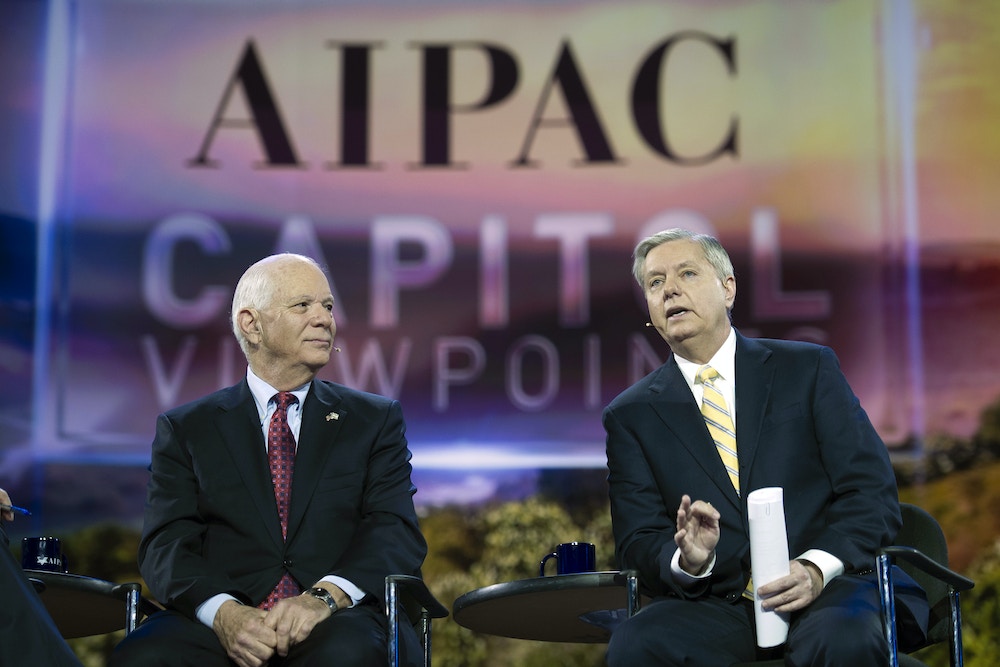 Ben Cardin and Lindsey Graham at the annual AIPAC Conference, 2015

But Cardin’s crowning achievement came last year when he authored a bill that would have made it a felony to support a boycott of Israel — a bill that was such a profound assault on basic First Amendment freedoms that the ACLU instantly denounced it and multiple senators who had co-sponsored Cardin’s bill (such as Sen. Kirsten Gillibrand) announced that they were withdrawing their support.

Despite all of this, or perhaps because of it, establishment Democrats wasted no time in mocking and denouncing Manning’s bid to become the first-ever trans woman in the Senate, instead quickly lining up in support behind the straight, white male who has wielded power for decades. To demean Manning, many of these establishment Democrats invoked the primary tactic they now reflexively use against anyone they view as a political adversary: They depicted her as a tool of the Kremlin, whose candidacy is really just a disguised plot engineered by Moscow.

Leading the way in spreading this obviously deranged but acceptable-in-D.C. conspiracy theory was Neera Tanden, president of the largest Democratic Party think tank in Washington. Last night, Tanden spread a viral tweet that strongly implied — without even pretending to have a shred of evidence — that the Kremlin had engineered Manning’s candidacy as punishment for Cardin’s hard-line position on Russia:

This conspiracy theory mocks itself. The idea that Vladimir Putin sat in the Kremlin, steaming over Cardin’s report on Russia and thus, developed a dastardly plot to rid himself of his daunting Maryland nemesis — “I know how to get rid of Cardin: I’ll have a trans woman who was convicted of felony leaking run against him!” — is too inane to merit any additional ridicule. But this is the climate in Washington: No conspiracy theory is too moronic, too demented, too self-evidently laughable to disqualify its advocates from being taken seriously — as long as it involves accusations that someone is a covert tool of the Kremlin. That’s why the president of the leading Democratic think tank feels free to spread this slanderous trash.

(As a side note: Tanden’s ongoing attempt to smear all of her critics as agents of a foreign power is particularly ironic given that the think tank she runs, the Center for American Progress, conceals the identity of many of its largest donors, but admits that one of its largest contributors is one of the world’s most repressive regimes. If there’s any entity worthy of the type of disloyalty innuendo that Tanden loves to spread, it’s the one she runs: Why have so many establishment Democrats so quickly decided to back a white, straight male politician steeped in privilege, while devoting themselves to opposing a candidate who would make history by becoming the first trans woman ever elected to the U.S. Senate, in the process inspiring trans youth around the world and helping to erode the stigma that has made them so vulnerable to discrimination and violence?

They’ve decided to do this presumably because they find Cardin’s centrist ideology and politics more appealing than Manning’s more radical politics and believe that this trumps what could be the historic value of Manning’s candidacy. They’ve apparently decided to prioritize their own centrist ideology over the important gender, sexual orientation, and trans equality progress that Manning’s victory would ensure.

One can certainly make an argument that the license they’ve granted themselves here — to prioritize ideology and politics over identity — is a reasonable one. But one wonders whether they intend to maintain a monopoly on this license or extend it to others.

Establishment Democrats have spent all day attacking this article with one claim: that it cites “only” one example of a Democrat who depicted Manning’s candidacy as a Kremlin plot — CAP President Neera Tanden — and therefore it’s baseless to say that there’s a smear “campaign” against Manning from centrist Democrats. It’s worth making a few points about this claim:

Chelsea Manning could have leaked the info anywhere

Then we have this, from one of the U.S. media’s favorite Russia-obsessed “experts”: Then we have one of the #Resistance’s most beloved MSNBC personalities, helping to spread the same conspiracy theory as the one Tanden re-tweeted: And then we have this from the former RT anchor, who is widely celebrated in Democratic Party circles for having left the network:

Chelsea Manning has for years been a celebrated hero in Russian media. Putin would love to see her win a U.S. Senate seat

I could literally spend the rest of the evening posting examples from large accounts that — within 24 hours of Manning’s announcement of her candidacy — tried to tie her and her campaign to the Kremlin. Even if it had “just” been the head of the Center for American Progress doing it, that would have justified this article; but clearly, it was far more widespread and coordinated than that.

And just to underscore the point again: This issue is totally ancillary to the primary point of the article, which is about how centrist Democrats exploit identity politics when it suits them, but then feel free to keep old, white, straight men in power at the expense of marginalized minority candidates, such as Manning.