Speaking to The Intercept’s Jeremy Scahill, the Hawaii representative defended her controversial positions and encouraged U.S. talks with North Korea. 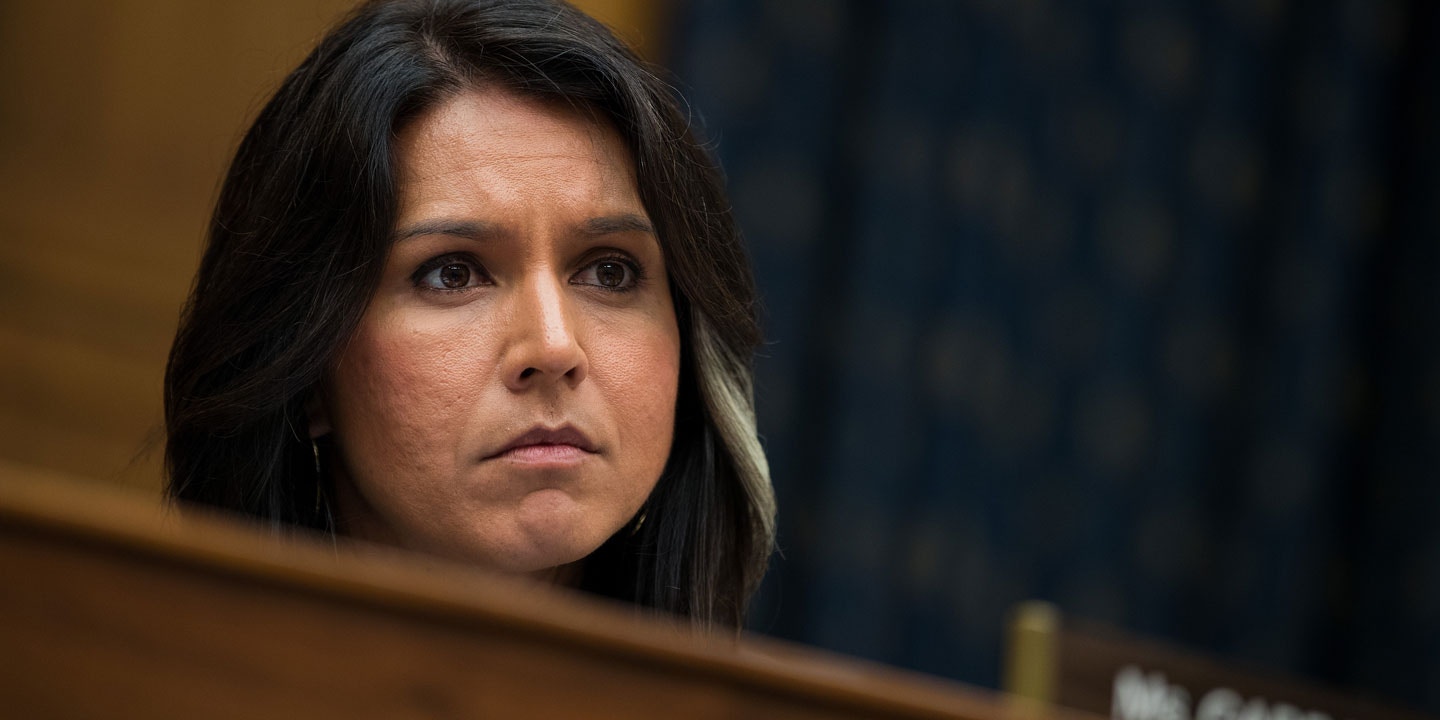 For 38 minutes last weekend, many in Hawaii thought a ballistic missile was headed straight for the island, in what turned out to be a false alarm. The incident, Rep. Tulsi Gabbard told The Intercept’s Jeremy Scahill, underscores the need for President Donald Trump to pursue direct talks with North Korea’s Kim Jong Un and take the threat of a nuclear strike seriously.

Gabbard, a Hawaii Democrat, was one of the first to tell the public, in an all-caps tweet, that the notification they received on their cellphones about an impending strike was a false alarm. An employee had inadvertently sent out the emergency alert after pushing the wrong button, state leaders later said.

The shocking alert came months after Hawaii started testing its nuclear warning siren system. State civil defense officials had told residents that, in the case of an actual emergency and not a drill, they would have 15 minutes to take shelter. These changes, combined with Trump’s proclivity to speak casually about nuclear warfare, added a dimension of horror for Hawaii residents.

The “people of Hawaii are really paying the price,” Gabbard said, for decades of “failed leadership from both Democrat and Republican administrations on allowing this threat to build and grow.”

The president needs to take the threat of nuclear war seriously and engage with the North Korean regime so that people “don’t have to live under this dark shadow of a nuclear attack and war,” she said. “Failed negotiations — if they even occurred — unrealistic preconditions, as well as this long-held U.S. foreign policy of regime change and how that has led North Korea to develop and tighten their grip on nuclear weapons, because they see that as the only deterrent to the U.S. leading an effort to topple their regime.”

North Korea views its nuclear arsenal as critical to fending off U.S. attempts at regime change, making negotiations aimed at denuclearization unlikely. This reality, Gabbard said, makes it even more important for the United States to end its “long-held regime change war policies” in order to be considered a credible negotiator.

The representative said previous regime change efforts by the United States “have ended up worse off for the people of those countries and have been counterproductive to the interests of the American people.” Gabbard has been an outspoken critic of U.S. involvement in the Middle East; from the disastrous Iraq War to NATO’s 2011 intervention in Libya that followed Arab Spring protests against the brutal regime of Moammar Gadhafi.

Critics have accused Gabbard of being supportive of Saddam Hussein, Gadhafi, and other authoritarian leaders. She laughed off that criticism, saying it came from people “who levy these attacks because they cannot debate the actual substance and the truth.”

Anti-Gadhafi rebels killed the dictator in October 2011, ending four decades of totalitarian rule. His mass surveillance regime suppressed dissent, imprisoning and torturing opponents, such as activists, writers, and journalists who were critical of the government. In the years since his death, the country has descended into civil war with two governments vying for power, the widespread proliferation of arms, and the rise of the Islamic State. But critics note that Gadhafi, who famously referred to 2011 protesters as “rats” who ought to be hunted down, likely would have been at least as brutal as Syria’s Bashar al-Assad, who has indiscriminately bombed and used chemical weapons against those opposed to his rule.

While many on the left have applauded Gabbard’s anti-interventionism, some of her other foreign policy stances have also angered the left and received praise from conservatives. She has, for example, argued in support of the global war on terror, a position antithetical to her anti-war image.

Asked if she still favors a small footprint approach with limited use of weaponized drones against groups like ISIS and Al Qaeda, Gabbard said, “With these terror cells, for example, yes, I still believe that the right approach to take is these quick-strike forces, surgical strikes in and out, very quickly, no long-term deployment, no long-term occupation, to get rid of the threat that exists and then get out and the very limited use of drones in those situations where our military is not able to get in without creating an unacceptable level of risk.”

These strikes have taken a significant toll on civilian populations.

Democrats and Republicans alike responded with disgust when Gabbard met with Assad last year, a move critics said only helped legitimize a war criminal. On Intercepted, she defended her decision to go on the undisclosed trip, saying her “mission was one of peace.”

“I feel strongly that if we truly care about the Syrian people, that if we truly want to do what we can to bring about an end to their suffering, then we have to be willing to meet with anyone that we need to if there’s a possibility that peace could be achieved,” Gabbard said. “This is the same reason why I’ve been calling for us to have direct talks with Kim Jong Un. Regardless of our opinion of these people, whether they be adversaries or dictators or others, the reality is that there is no possibility of peace unless we are willing to talk and engage directly.”

In seven years of war, the Assad regime has shown no inclination toward peace. It has continued its brutal attacks against civilians and has continued the imprisonment of thousands of political detainees in prisons notorious for their torture, even as it participates in peace talks. For weeks, the regime and its Russian ally have been bombing the rebel enclaves of Eastern Ghouta and Idlib, areas that are officially designated as “de-escalation zones.”

In April, Gabbard said she was “skeptical“ the Assad regime was responsible for a chemical weapons attack that killed dozens of people. “If President Assad is found to be responsible after an independent investigation for these horrific chemical weapons attacks, I’ll be the first one to denounce him, to call him a war criminal and to call for his prosecution in the International Criminal Court, make sure that those consequences are there,” she said at the time, decrying Trump’s punitive missile strike in response to the attack.

In October, the United Nations issued a report blaming the Assad regime for the April attack, naming — for the first time — Assad’s government as a perpetrator of a chemical weapons attack. Gabbard has yet to denounce him.

Listen to the entire interview here: