Convicted of receiving bribes for political favors, Lula still plans to announce his candidacy for president on Thursday. 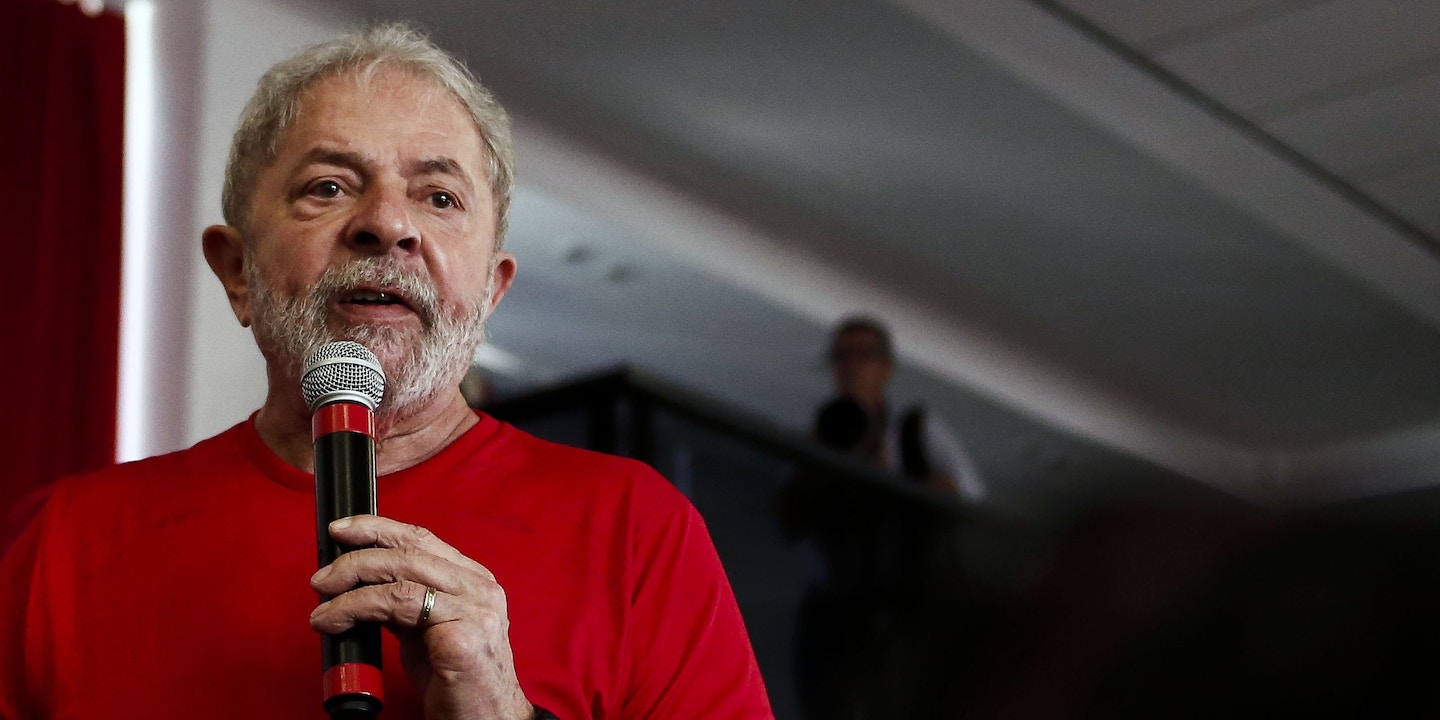 A Brazilian federal appeals court upheld the conviction of former President Luiz Inácio Lula da Silva on corruption charges this Wednesday in the southern city of Porto Alegre by a vote of 3-to-0. The panel increased his prison sentence to 12 years and one month. Last July, Judge Sérgio Moro, who leads the sprawling corruption investigation known as Operation Car Wash, sentenced Lula to nine-and-a-half years in prison for allegedly accepting bribes from a contractor in exchange for political favors.

Lula, who holds a commanding lead in every poll for the presidential election later this year despite his conviction, may still appeal to a higher court. Now, the former president’s fate is as complicated as the surreal Brazilian judicial system that controls it: In a few months we will know if the Workers’ Party leader will spend the next years of his life in jail or in the presidential palace for a third term.

The case against Lula centers around a beachfront penthouse apartment in Guarujá, a 90-minute drive southeast of São Paulo, that is estimated to be worth $1.1 million. The triplex was allegedly a gift from OAS, a construction company that received multiple large contracts from the federal government — many of them illegal — while Lula was president.

During the trial, a photograph surfaced showing the former president together with an OAS executive inside the property. The executive became a cooperating witnesses and testified that he negotiated the deal and OAS bankrolled an expensive remodeling of triplex specifically for Lula. In exchange, Lula allegedly steered the firm into deals with Petrobras, the state-controlled oil company, whose directors are appointed by the federal government. The indictment against Lula is rife with problems. The apartment’s title was never transferred to Lula or his associates; he and his wife never used the property; the prosecution could not identify an explicit quid pro quo or benefit related to Petrobras; no official or internal documentation linking Lula to the apartment was produced; and the case rests almost entirely on the testimony of the executive who hoped to gain sentencing leniency for his cooperation. Many high-profile lawyers from varied political stripes argue that the indictment and Moro’s ruling are flawed.

In a more nettlesome wrinkle, Moro unsealed wiretapped telephone conversations between Lula and his lawyers and also with then-President Dilma Rousseff. The recordings had been made after the judicial warrant had already expired. The tapes promptly leaked to the press at a highly charged political moment and were played non-stop on TV news to dramatic effect — an effort to drive public opinion against the former president. The release was unconstitutional and Moro was eventually forced to admit his errors after the Supreme Court began to look into it.

In another notable incident, Moro sent Federal Police to Lula’s house to forcibly take him to a remote deposition in a dingy conference room in an airport in São Paulo. The existence of the operation was leaked to the press and the subsequent media circus produced embarrassing images that resembled a perp walk. It was an entirely unnecessary spectacle, as Lula’s lawyers had made it clear that he would voluntarily cooperate. There was a heavy security presence outside the Federal Regional Court in Porto Alegre, Brazil on January 23, 2018, the day before the trial of former Brazilian president Luis Inacio Lula da Silva.

The System is Rigged

These overreaches reflect the attitude of the country’s entrenched judicial elite, who wield almost untouchable power. Judges regularly receive outrageous salaries leaps and bounds above the constitutional limit; opine liberally in interviews; have private businesses that benefit from public money and their public profile; and often squabble in open court as if they were on a reality show. (In one famous exchange in the Supreme Court, one minister quipped to another, “Your excellency is in the media destroying the credibility of the judiciary. Your excellency is not talking to one of his henchmen.”) If judges are caught red-handed committing serious crimes, the maximum penalty is retirement — with a full pension.

It is amid these eccentricities of Brazil’s judiciary that the Lula trial unfolded among controversy. The president of the court who convicted Lula today — the boss of the three judges on the panel — previously declared in an interview that Moro’s indictment was “just” and “irreproachable” before confessing that he had not examined the evidence. One of the three judges who voted for today’s conviction, João Pedro Gebran Neto, is a personal friend and former classmate of Sergio Moro. In the acknowledgements of a book he wrote, Gebran describes Moro as a “learned and insightful man,” adding “our affinity and friendship only grew during this period, as it became clear that [Moro] collaborated decisively to this work with suggestions and criticisms.”

Lula’s treatment at the hands the courts is not exactly anomalous, critics say. Brazil is grappling with a moral quandary over its criminal justice system: Is it fair that, like Lula, thousands of people are sentenced each year without irrefutable material evidence of their alleged crimes? 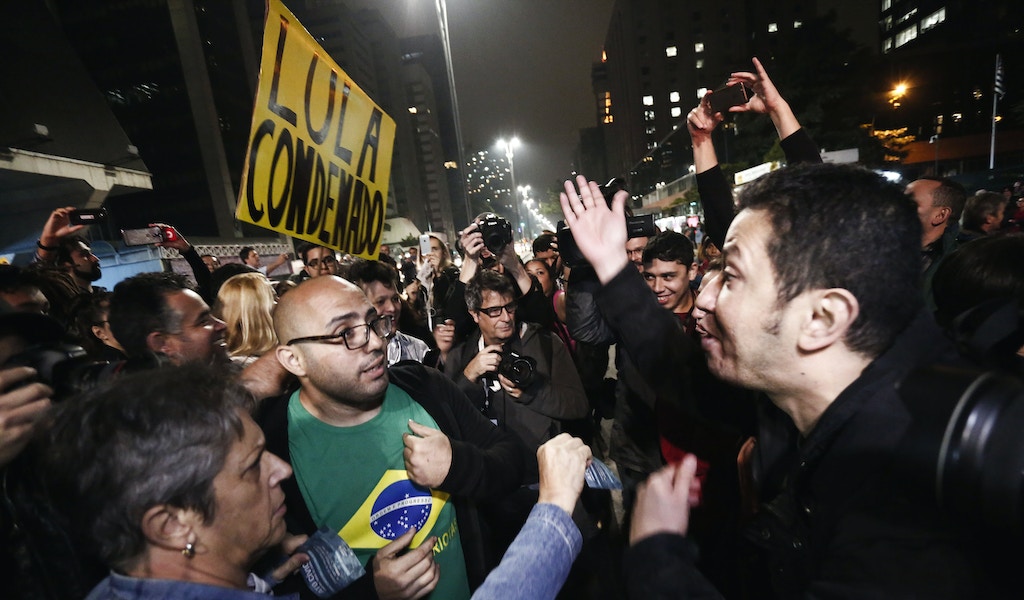 Demonstrators in favour (R) and against former president Luiz Inacio Lula da Silva argue during a demo in Sao Paulo, Brazil on July 12, 2017, after he was sentenced to nearly 10 years in prison for graft.

The Court of Public Opinion

The public debate surrounding the case has had little to do with real estate and has instead been something of a referendum on Lula’s legacy: Should the man enter the history books as a political legend or go straight into the garbage can?

Leftists, unsurprisingly, have fiercely criticized the proceedings that have put their leader in the crosshairs over the past years. But Operation Car Wash, under Moro, has exposed corruption in all of Brazil’s major political parties. The parties that orchestrated Rousseff’s impeachment on the supposed grounds of “fighting corruption” — the PMDB and the PSDB — have themselves been exposed for extreme corruption. But,  as Celso Rocha de Barros notes, only Lula’s party, the PT, has been politically decapitated, while the leaders of other parties remain in power in the face of overwhelming evidence. President Michel Temer, of the PMDB, is the most unpopular leader in Brazilian history (and, in fact, in the world) and has faced a slate of serious corruption charges.

The apparent hypocrisy has exacerbated widespread political disillusionment: In a country where voting is mandatory, 32.5 percent of population abstained, voted “none of the above” or left their ballot blank in the last election.

Amid this disillusionment, Lula remains a favorite politician. It remains unclear if he will be able to run in the next election; his candidacy could be blocked prior to election day due to the upheld conviction. If he does run and win, Lula could also subsequently be removed from office by the judiciary.

The mere possibility of his candidacy will continue to be met by fierce opposition: For Brazil’s right wing, Lula’s electoral victory would mean a new economic recession for the country and a foreclosing of their economic future. The Market Wants Austerity, Not Lula

Last month, the financial rating agency Standard & Poor’s reduced Brazil’s credit rating from “BB” to “BB-.” a move that contradicts the current government’s message that the economy is getting on track thanks to the introduction a slew of harsh austerity measures. Analysts regularly attribute stock and currency dips to the anonymous “market’s” ethereal “fear of Lula“. The financial press has endlessly cited “expert analysis” warning that if Lula is acquitted, interest rates will rise and the stock market and currency will fall. Since the beginning of the year, chief economists of investment firms have said that they “do not consider the hypothesis that Lula will be acquitted.” The threat is implicit: Convict him or the crisis will return.

The same advocates of austerity who pushed to use Brazil as the laboratory of neoliberalism in the 1990s — and today admit that the model did not work — now want the country to give it another crack; they have renewed their endless appeals to “the market.” The current administration supports this once-failed tack, especially through privatizing state-owned companies, slashing public services, and loosening labor laws. The gamble would place the country more firmly in the hands of a business class that invariably cares only about further concentrating its own wealth. All this amid an environment where staggering inequality is already rife: Brazil’s richest 5 percent have the same income as the remaining 95 percent.

Lula in 2018, however, isn’t exactly Che Guevara. His political legacy has business-friendly foundations, with a veneer of social justice in the style of a Barack Obama. In embracing big business and showering them with the best economic period in the nation’s history, Lula and his party made the mistake of believing they had been accepted as equals in the oligarchic parlors that have long-since run Brazil. Lula’s circle sipped champagne and simultaneously won plaudits by the millions of working poor struggling at the edge of misery — they had it all.

But “the market” always wants more. Lula’s party learned to hold the champagne flute with grace, but when the time came, they weren’t ready to break off the base and shove the jagged stem into the neck of their poorest supporters’ necks — in service of propping up investor profits. So the market moved on and found someone else who would. The scandal was never really about corruption.

What does this mean for Brazil? The economy has just barely scraped out of a harsh recession that pushed millions back into extreme poverty. Unemployment remains high. And even though inflation is currently under control, some economists believe Brazil may soon enter a dangerous cycle of deflation, a harbinger of a lost decade. A shaky economic foundation is a difficult enough position for any nation to be in; in Brazil it is coupled with political instability. The two most likely results to this year’s election both produce scenarios in which the winner lacks governability. If Lula wins, his victory can be annulled at any moment and he can expect the market to punish the nation economically for its choice. The alternative is likely to be a relatively unpopular right-wing candidate who will continue implementing crushing austerity policies. Dump that on top of the current mess that Brazil is in and, either way, the result is a confluence of circumstances with a destructive potential yet unmeasured.

Update: Jan. 24, 2018, 2:58 p.m.
This story has been updated to reflect the final tally of judges and the increased prison sentence for Lula.