Puerto Rico plans to sell off public assets, a common tactic for economically troubled governments ensnared in some kind of debt peonage. 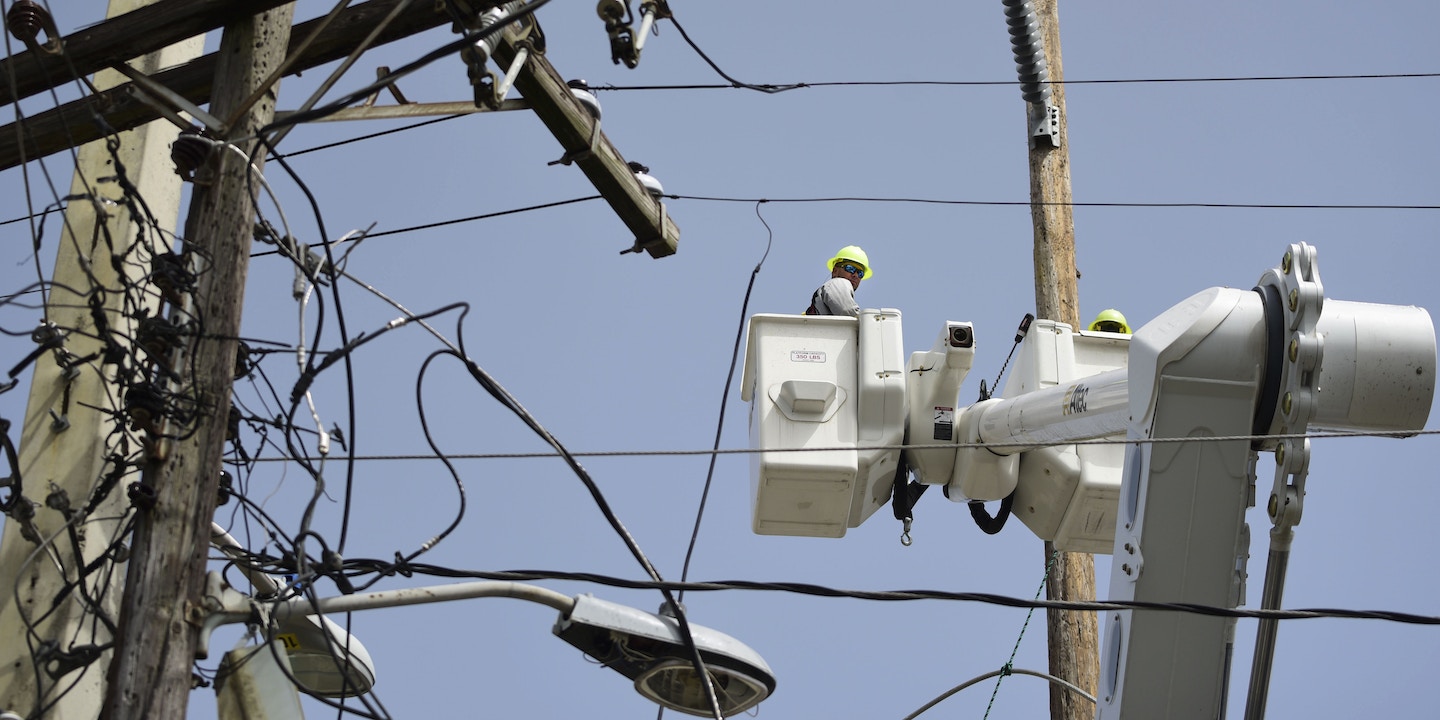 Puerto Rico’s electric utility, in the wake of Hurricane Maria, was eligible to enter into various mutual aid agreements with other utilities that are commonplace after major disasters. The Puerto Rico Electric Power Authority, known as PREPA, is a member of the American Public Power Association, and through that membership, it could have requested that workers from other utilities come help with grid recovery efforts. It did not.

Instead, PREPA’s leadership entered into several dubious agreements with private contractors. The most famous of these was the since-scuttled $300 million contract with the controversial Montana-based firm Whitefish Energy.

Fredyson Martinez, vice president of UTIER, the union representing PREPA line workers, recognized a pattern. “From where we sit,” Martinez said, “the government created the crisis with austerity politics. When Maria hit, it essentially exposed the weaknesses of a utility that had suffered from years of neglect.”

Puerto Rico Gov. Ricardo Rosselló announced on Monday that he intends to privatize PREPA, calling it “a heavy burden on our people, who are now hostage to its poor service and high cost.” When Martinez started working for PREPA 20 years ago, he remembers higher-ups in the union speculating about the prospect of privatization. “I didn’t think much of it,” he told me. “It was only later that I started to see that they have been working to spread the idea that privatization is the only option to solve Puerto Rico’s problems. This isn’t a casual thing. It has been prepared and thought-out. … They took advantage of the crisis.”

Neither Rosselló nor the control board currently overseeing the island’s finances has been subtle about their preference for the privatization of PREPA and other parts of the Puerto Rican public sphere. Speaking on a panel at the New York City Bar Association on Monday, the control board’s general counsel, Jaime El Koury, argued that Puerto Rican lawmakers should look to Chile under the dictatorship of Augusto Pinochet as a model for the kind of “competitive” free-market reforms it should look to integrate, modeled off the work of the Chicago Boys’ neoliberal economic dogma.

Now, with such a large percentage of the island still without power, getting the grid back online will be critical to reviving the island’s economy, which was already suffering prior to hurricane season. “This issue isn’t only an UTIER’s issue or PREPA employees’ issue,” Martinez told me. “It’s a Puerto Rican issue. Who controls the electric power controls everything.”

The privatization comes at a politically opportune time for Rosselló’s administration, but for the people of the island, the timing could not be worse. Just under 40 percent of the island still lacks reliable power, and there are already persistent management and supply issues between PREPA employees, private contractors, and the federal unified command — represented by the U.S. Army Corps of Engineers and the Federal Emergency Management Agency — helping Puerto Rico with post-hurricane recovery. While it’s unlikely the timeline for privatization would overlap with that for electrical grid reconstruction, selling separate pieces of the utility off to various bidders — themselves each accountable to their shareholders — is unlikely to bring the longer-term efficiency and reliability Rosselló has promised.

Selling off public assets is a relatively common tactic for right-wing governments and economically troubled ones ensnared in some kind of debt peonage like Puerto Rico. The sales promise a quick injection of cash for ailing state, federal, or municipal budgets. The tradeoff, more often than not, is entrusting services as basic as water or electricity to corporations that aren’t accountable to the people they serve. That mostly has to do with the basic mandates of public and private sector firms. The former are obligated to provide a service to people within a certain geographic area; the latter are obligated to provide profits to their shareholders, whose interests are often divergent from those of the general public.

The plan as of now is to auction off the beleaguered public company’s generation capacity and bring its transmission and distribution lines under the jurisdiction of a private operator. The first step, though, will be establishing the legal framework for this to happen among various stakeholders, which could prove challenging. Rosselló will first need to pass the plan through the island’s legislature. After that, it’s unlikely that members of the fiscal control board — the Washington-appointed body that oversees the Puerto Rican government’s finances — will put up much of a fight; its leadership has advocated privatizing PREPA for years and voiced its approval of Rosselló’s plan to The Atlantic’s Vann Newkirk II. The bigger battle may come from the holders of the utility’s $9 billion in debt, mainly American hedge and mutual funds. Although one creditor group expressed tentative support for the plan, the creditors have historically opposed privatization for fear of losing their collateral and could mount a legal defense of continued public ownership in front of Laura Taylor Swain, the federal district judge presiding over the island’s bankruptcy-like proceedings in New York.

Both creditors and the fiscal control board have argued for control of PREPA during the court proceedings, claims Swain has rejected. The bondholders, for their part, filed a petition to bring it into a private receivership in September. More recently, the judge squelched a push from the fiscal control board to bring PREPA under the mandate of Revitalization Coordinator Noel Zamot, who was appointed by the “junta” — as the board is colloquially known — this summer.

Pending the creation of some kind of legal framework for privatization, the governor’s office would then open PREPA up for bids that it would evaluate and make decisions on within 18 months. Rosselló is due to present his fiscal plan Wednesday for approval by the board, which could include more details on his privatization plan.

“The timing was perfect for them,” Martinez said of the government. “People are very sensitive right now. The government saw that as an opportunity, because right now is a moment when people will grasp onto anything to get their power back.”

But Who Wants It?

One major question is who wants to buy up an island electric system buckling under $9 billion in debt and decades of disrepair. The answer, for Cathy Kunkel of the Institute for Energy Economics and Financial Analysis, is somebody only looking to squeeze short-term profits. She predicts that private equity firms could be among those who swoop in, as they have in the case of some flailing coal-fired generators on the U.S. mainland. If they do, they’d be just the latest in a string of disaster capitalists to come to Puerto Rico in search of a quick buck, the most notorious culprits being the Wall Street banks who engineered potentially illegal forms of debt that deepened the island’s economic crisis.

“They buy them up for really cheap and then make money for a few years and then retire them,” she told The Intercept. “Selling your electrical system to a private equity firm doesn’t sound like it’s going to do a lot of good for ratepayers.”

The announcement also comes just two weeks after the governor’s office announced its intent to essentially dismantle the only regulatory body with oversight over PREPA, the Puerto Rico Energy Commission. As The Intercept reported recently, Rosselló’s New Progressive Party — when it was the opposition party — fought PREPA reforms in the Puerto Rican legislature, including the act that allowed for PREC’s creation. His new proposal would liquidate the body into a three-person omnibus regulator responsible for everything from telecoms to energy. The proposal would also get rid of the Independent Office for Consumer Protection, which supports ratepayers in seeking compensation for PREPA missteps.

As Kunkel asked, “Who’s going to be looking out for ratepayers given that he’s at the same time trying to get rid of the Energy Commission? The structural factors that make electricity expensive in Puerto Rico are still there until somebody figures out what to do with them.” The bulk of the island’s electricity comes from imported oil. PREC has worked in the last several years to create an integrated resource plan to transition to cheaper and renewable fuels, though those plans could be abandoned if the commission is dissolved.

“Just saying that making everything private will magically fix everything is delusional,” Kunkel added.