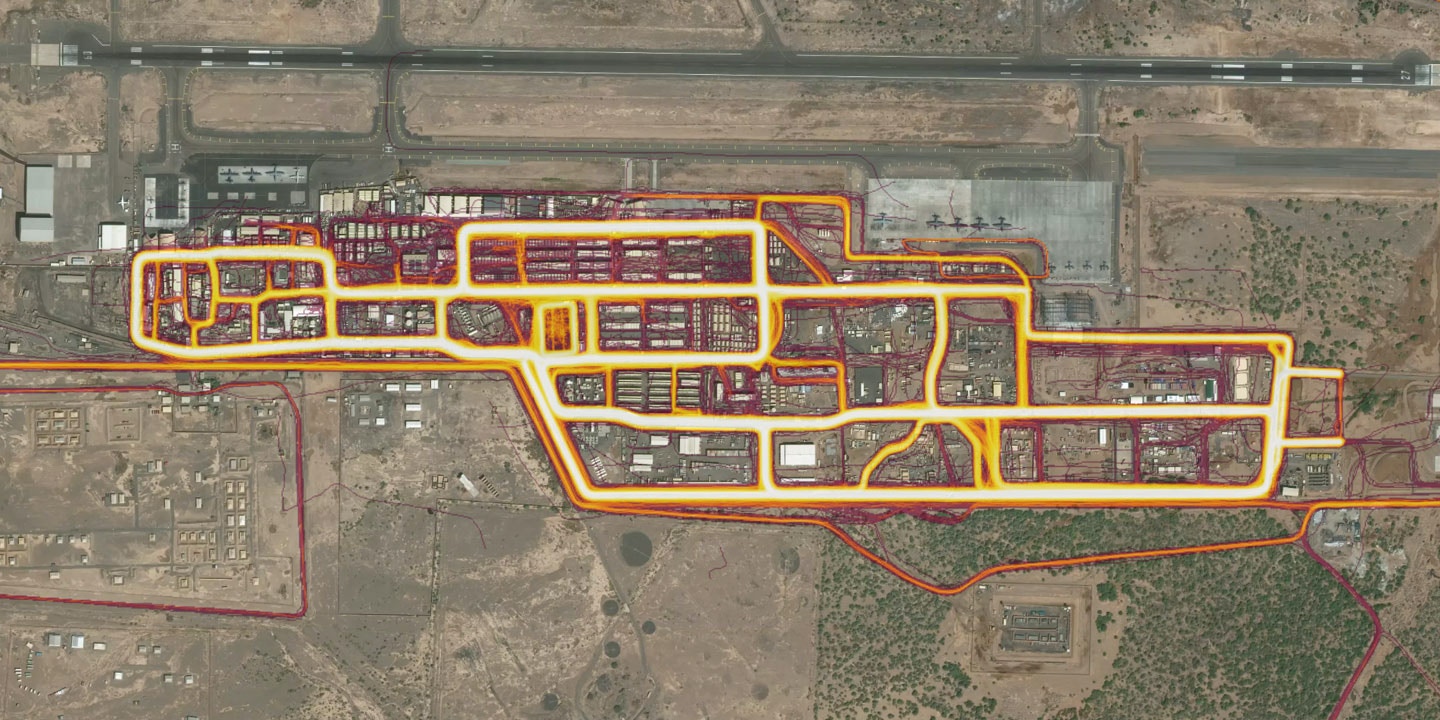 Out in the cocoa-colored wastes of north-central Niger, people have been running around in circles. Exactly who has been jogging or walking around this compound outside the town of Arlit is unclear. But there’s a good chance it has something to do with U.S. Africa Command’s “Analysis Office” there, the existence of which was disclosed in 2016 contracting documents.

Not far away, people have been running round and round in a compound near the airfield in Agadez, Niger, where the U.S. military is building a $100 million drone base. There has also been a significant amount of movement going on around the airport in Gao, Mali, where the U.S. military established an outpost in the early 2010s. And Garoua, Cameroon, the site of a U.S. drone base, is also aglow with the digital evidence of many past runs, according to an online interactive map that shows the routes of people who use fitness devices, such as Fitbit. 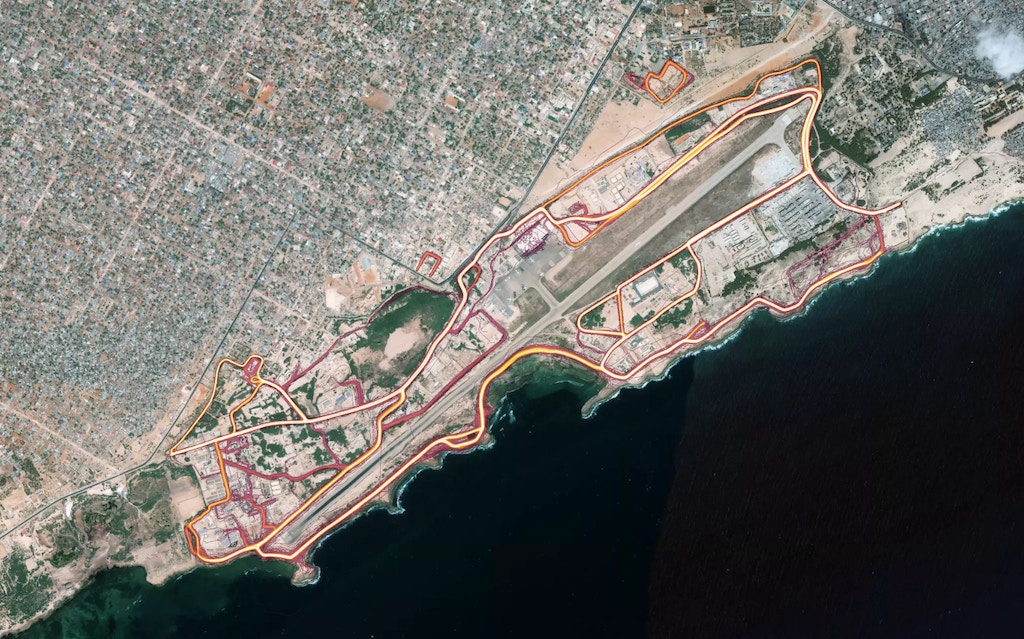 Running route around airports in Mogadishu.

To the east, the airport in Faya-Largeau, Chad, turns out to be a fitness hotspot. The digital signatures might have been generated by French forces who have operated there, but it also might have something to do with the fact that, according to formerly secret 2014 AFRICOM documents, the U.S. military has a “contingency location” at the facility. Running routes are even more radiant at the airport in Chad’s capital, N’Djamena. People have also been racing around the airfield in Baledogle, Somalia, the very same site previously identified as a U.S. outpost. And that isn’t the only site in Somalia outlined by the neon glow of workouts past, as evidenced by the dazzling effect around airports in Mogadishu and Baidoa.

The outline of Camp Lemonnier, a large U.S. base in the sun-bleached nation of Djibouti, burns brighter than Las Vegas at midnight. A more remote site, about 10 kilometers away, is another popular locale for running … and drone flights. Chabelley Airfield is aglow with the digital signature of military personnel, with the most popular route circling the airstrip.

The Global Heat Map, released in November 2017 by fitness tracking company Strava, provides more than 3 trillion individual global GPS data points uploaded over the last two years via fitness devices, such as Fitbit, Jawbone, and Vivofit, as well as by people who directly subscribe to its mobile app, according to the company. In many parts of the United States and Europe, where millions of people use fitness trackers, the map is ablaze with light. In more austere locations, like the war zones of Yemen, Syria, and Afghanistan, as well as remote areas of Africa, fitness hot spots – in the form of neon paths along the perimeters of fenced-in compounds or secure roads – are far more likely to denote the presence of Western personnel working for the United Nations, humanitarian organizations, or foreign militaries like the U.S. armed forces.

In the past, the U.S. Defense Department has encouraged the use of Fitbits, distributing 2,500 to military personnel in 2013. Two years later, the Navy announced “plans to run a pilot program in the Pacific Fleet and Navy Reserve using wearable fitness trackers like Fitbits.” In 2016, Marines were, with a few important caveats, authorized to wear fitness tracking devices, including Fitbits, “in all Marine Corps spaces where collateral classified information and controlled unclassified information is processed, stored, or discussed” anywhere on earth. And last year, the Army announced plans to issue fitness bracelets “that will allow Army leaders to track their Soldiers’ fitness in real time.”

While Strava’s Global Heat Map was posted online last year, it only attained widespread notoriety over the weekend, when it was publicized on Twitter by Nathan Ruser, a 20-year-old Australian student studying international security. This has led to disclosures of the supposed locations of numerous low-profile U.S. military outposts, forward operating sites, and bases. It has raised fears about how such information might be linked to individual troops and imperil U.S. forces, while shining a light on the poor operational security habits of many U.S. military personnel based overseas.

For its part, U.S. Army Special Operations Command provides online guidance for maintaining digital privacy for personnel using Fitbits. U.S. Central Command, the umbrella organization for military operations in the greater Middle East, told the Washington Post that it will change its guidelines for the use of wireless and technological devices on military facilities.

The Intercept reached out to U.S. Africa Command, seeking comment on the implications of the Global Heat Map, regulations regarding the use of fitness trackers, and whether plans exist to issue new guidance regarding such devices. A digital receipt shows that AFRICOM personnel read the emailed questions, but the command did not respond to The Intercept prior to publication.

Akil Harris contributed to this report.

Top screenshot: The outline of Camp Lemonnier, a large U.S. base in Djibouti.