A new base outside Agadez, Niger, will host a fleet of MQ-9 drones and serve as a regional hub for U.S. counter-terror missions. From high above, Agadez almost blends into the cocoa-colored wasteland that surrounds it. Only when you descend farther can you make out a city that curves around an airfield before fading into the desert. Once a nexus for camel caravans hauling tea and salt across the Sahara, Agadez is now a West African paradise for people smugglers and a way station for refugees and migrants intent on reaching Europe’s shores by any means necessary. Africans fleeing unrest and poverty are not, however, the only foreigners making their way to this town in the center of Niger. U.S. military documents reveal new information about an American drone base under construction on the outskirts of the city. The long-planned project — considered the most important U.S. military construction effort in Africa, according to formerly secret files obtained by The Intercept through the Freedom of Information Act — is slated to cost $100 million, and is just one of a number of recent American military initiatives in the impoverished nation.

The base is the latest sign, experts say, of an ever-increasing emphasis on counterterror operations in the north and west of the continent. As the only country in the region willing to allow a U.S. base for MQ-9 Reapers — a newer, larger, and potentially more lethal model than the venerable Predator drone — Niger has positioned itself to be the key regional hub for U.S. military operations, with Agadez serving as the premier outpost for launching intelligence, surveillance, and reconnaissance missions against a plethora of terror groups.

For years, the U.S. operated from an air base in Niamey, Niger’s capital, but in early 2014, Capt. Rick Cook, then chief of U.S. Africa Command’s Engineer Division, mentioned the potential for a new “semi-permanent … base-like facility” in Niger. That September, the Washington Post’s Craig Whitlock exposed plans to base drones at Agadez. Within days, the U.S. Embassy in Niamey announced that AFRICOM was, indeed, “assessing the possibility of establishing a temporary, expeditionary contingency support location” there. The outpost, according to the communiqué, “presents an attractive option from which to base ISR (Intelligence, Surveillance, and Reconnaissance) assets given its proximity to the threats in the region and the complexity of operating with the vast distance of African geography.”

Air Force documents submitted to Congress in 2015 note that the U.S. “negotiated an agreement with the government of Niger to allow for the construction of a new runway and all associated pavements, facilities, and infrastructure adjacent to the Niger Armed Force’s Base Aerienne 201 (Airbase 201) south of the city of Agadez.” When the National Defense Authorization Act for fiscal year 2016 was introduced last April, embedded in it was a $50 million request for the construction of an “airfield and base camp at Agadez, Niger … to support operations in western Africa.” When President Obama signed the defense bill, that sum was authorized.

Reporting by The Intercept found the true cost to be double that sum. In addition to the $50 million to “construct Air Base 201,” another $38 million in operation and maintenance (O&M) funds was slated to be spent “to support troop labor and ancillary equipment,” according to a second set of undated, heavily redacted, formerly secret documents obtained from U.S. Africa Command by The Intercept. But the $38 million O&M price tag — for expenses like fuel and troops’ per diem — has already jumped to $50 million, according to new figures provided by the Pentagon, while sustainment costs are now projected at $12.8 million per year. 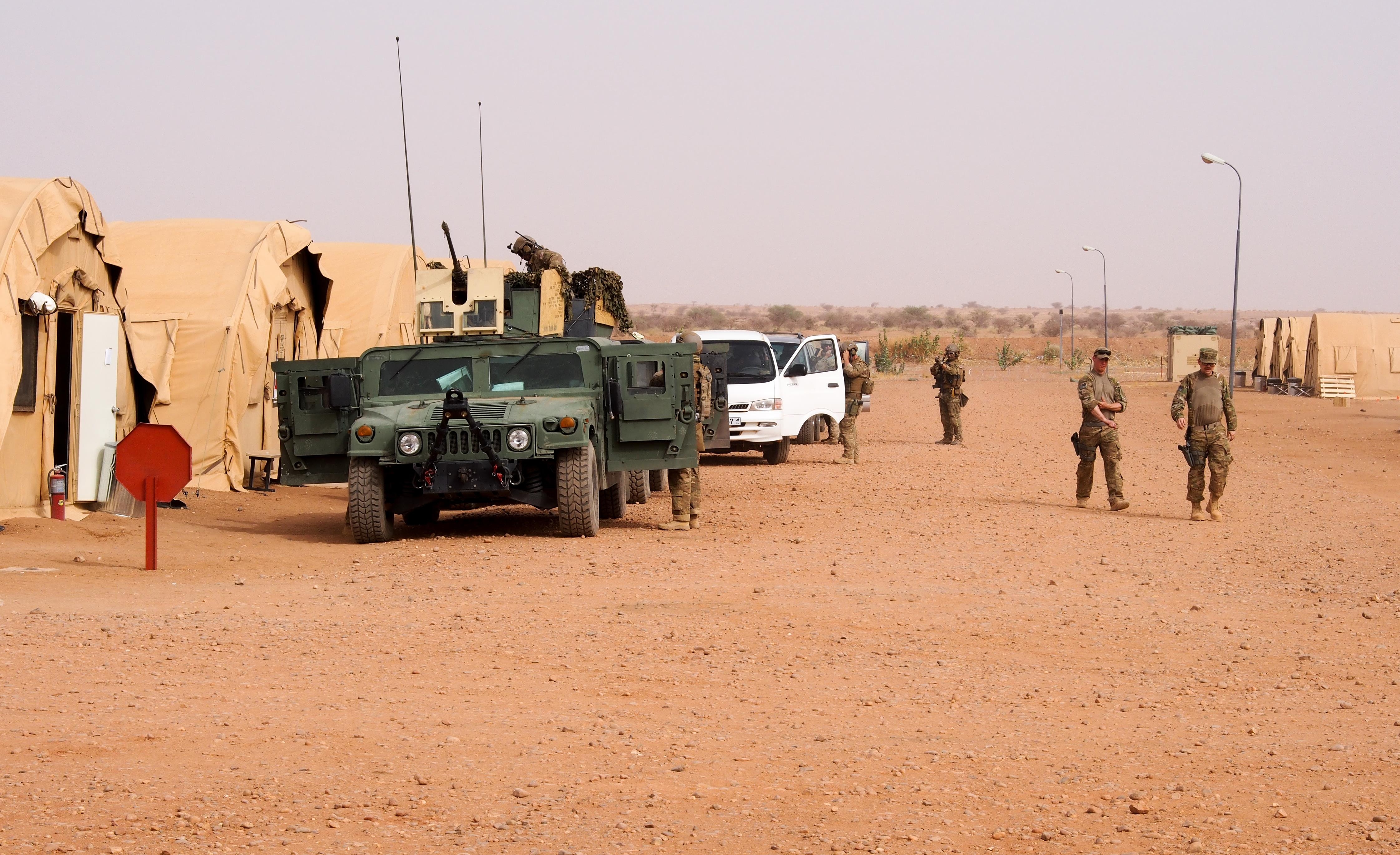 Airmen from Ramstein Air Base, Germany, prepare to convoy to an airfield near Agadez, Niger, April 29, 2016.

The files obtained by The Intercept attest to the importance of Agadez for future missions by drones, also known as remotely piloted aircraft or RPAs. “The top MILCON [military construction] project for USAFRICOM is located in Agadez, Niger to construct a C-17 and MQ-9 capable airfield,” reads a 2015 planning document. “RPA presence in NW Africa supports operations against seven [Department of State]-designated foreign terrorist organizations. Moving operations to Agadez aligns persistent ISR to current and emerging threats over Niger and Chad, supports French regionalization and extends range to cover Libya and Nigeria.”

The Pentagon is tight-lipped about the outpost, however.

“Due to operational security considerations, we don’t release details on numbers of personnel or specific missions or locations, including information regarding the Nigerien military air base located in Agadez,” Pentagon spokesperson Lt. Col. Michelle L. Baldanza told The Intercept in an email, stressing that drones are not yet flying from the outpost. However, the declassified documents say construction will be completed next year.

The documents offer further details, including plans for a 1,830-meter paved asphalt runway capable of supporting C-17 cargo aircraft and “miscellaneous light and medium load aircraft”; a 17,458-square-meter parking apron and taxiway for “light load ISR aircraft”; and the installation of “three 140’ x 140’ relocatable fabric tension aircraft hangars”; as well as all the standard infrastructure for troops, including “force protection” measures like barriers, fences, and an “Entry Control Point.”

While AFRICOM failed to respond to requests for information about the projects, a May 2016 satellite photo of the site provides a status report. “The image shows that the main runway … has been repaved,” said Dan Gettinger, the co-founder and co-director of the Center for the Study of the Drone at Bard College and author of a guide to identifying drone bases from satellite imagery. “Near the runway there’s a structure that appears to be a future hangar, though it’s still under construction. There’s also a new dirt road that runs a fair distance from the runway to a U.S. base that’s enclosed with a perimeter wall and there are a number of shelters there for personnel as well as a command center. All the things that you’d expect on a base.”

Satellite images of site of U.S. drone base outside Agadez, Niger.

According to the documents, Niger was the “only country in NW Africa willing to allow basing of MQ-9s,” the larger, newer cousins of the Predator drone. The documents went on to note: “President expressed willingness to support armed RPAs.”

The U.S. military activity in Niger is not isolated. “There’s a trend toward greater engagement and a more permanent presence in West Africa — the Maghreb and the Sahel,” noted Adam Moore of the department of geography at the University of California in Los Angeles and the co-author of an academic study of the U.S. military’s presence in Africa.

Since 9/11, in fact, the United States has poured vast amounts of military aid into the region. In 2002, for example, the State Department launched a counterterrorism program — known as the Pan-Sahel Initiative, which later became the Trans-Sahara Counterterrorism Partnership (TSCTP) — to assist the militaries of Chad, Mali, Mauritania, and Niger. Between 2009 and 2013 alone, the U.S. allocated $288 million in TSCTP funding, according to a 2014 report by the Government Accountability Office. Niger was one of the top three recipients, netting more than $30 million. U.S. special operations forces regularly train with Niger’s army and the U.S. has transferred millions of dollars’ worth of planes, trucks, and other gear to that impoverished nation. In a 2015 report to the Senate Foreign Relations Committee’s Subcommittee on Africa and Global Health, Lauren Ploch Blanchard of the Congressional Research Service noted that since 2006 Niger had received more than $82 million in assistance through the Department of Defense’s Global Train and Equip program.

“In close coordination with partner militaries in West Africa, including Niger, USAFRICOM supports a range of security and capacity building efforts in the greater Sahelian region,” Baldanza told The Intercept. “These efforts support U.S. diplomatic and national security objectives and are designed to strengthen relationships with African partners, promote stability and security, and enable our African partners to address their security threats.”

A U.S. Army trainer coaches a Republic of Niger soldier on marksmanship techniques at an AK-47 qualification range near Agadez, Niger.

Stability and security have, however, proved elusive. In 2010, for example, a military junta overthrew Niger’s president as he attempted to extend his rule. In fact, all the original members of the Pan-Sahel Initiative have fallen victim to military uprisings. Chad saw attempted coups in 2006 and 2013, members of Mauritania’s military overthrew the government in 2005 and again in 2008, and a U.S.-trained military officer toppled the democratically elected president of Mali in 2012.

The region, relatively free of transnational terror threats in 2001, is now beset by regular attacks from Boko Haram, a once-tiny, nonviolent, Islamist sect from Nigeria that has since pledged allegiance to the Islamic State and threatens the stability of not only its homeland but also Cameroon, Chad, and Niger. And Boko Haram is just one of 17 militant groups now menacing the region, according to the Defense Department’s Africa Center for Strategic Studies. Drones have long been integral to U.S. efforts in Niger. In 2012, according to the files obtained by The Intercept, Niger agreed to host U.S. drones in Niamey, the capital, on the condition that operations would eventually be shifted to a more remote military base in Agadez.

In February 2013, the U.S. began flying Predator drones out of the capital. Later in the spring, an AFRICOM spokesperson revealed that U.S. air operations there were providing “support for intelligence collection with French forces conducting operations in Mali and with other partners in the region.” The Air Force recently announced plans to upgrade shower and latrine facilities at Niamey “to serve a steady state of 200 to 250 personnel a day.”

“The U.S. shares that base with France,” said Gettinger. The base in Niamey, he explained, “is strategically important simply because to the north there’s Mali and the threat posed by al Qaeda-linked groups, including al Qaeda in the Islamic Maghreb. … To the south you have Nigeria and Boko Haram, so there’s lots of demand for ISR capabilities.” At Agadez, he noted, the U.S. doesn’t need to share facilities with the French military or commercial aircraft. And it is, he said, “more strategically located than Niamey.”

As UCLA’s Moore puts it: “The recent trajectory of sites and money suggests that Niger is becoming, after Djibouti, the second most important country for U.S. military counterterrorism operations on the continent.”

In Mali and Rest of Africa, the U.S. Military Fights a Hidden War

The Stealth Expansion of a Secret U.S. Drone Base in Africa

The U.S. Extends Its Drone War Deeper Into Africa With Secretive Base