At a hearing of the Senate’s Environment and Public Works Committee on Tuesday, the EPA’s Scott Pruitt repeatedly avoided answering simple yes-or-no questions. 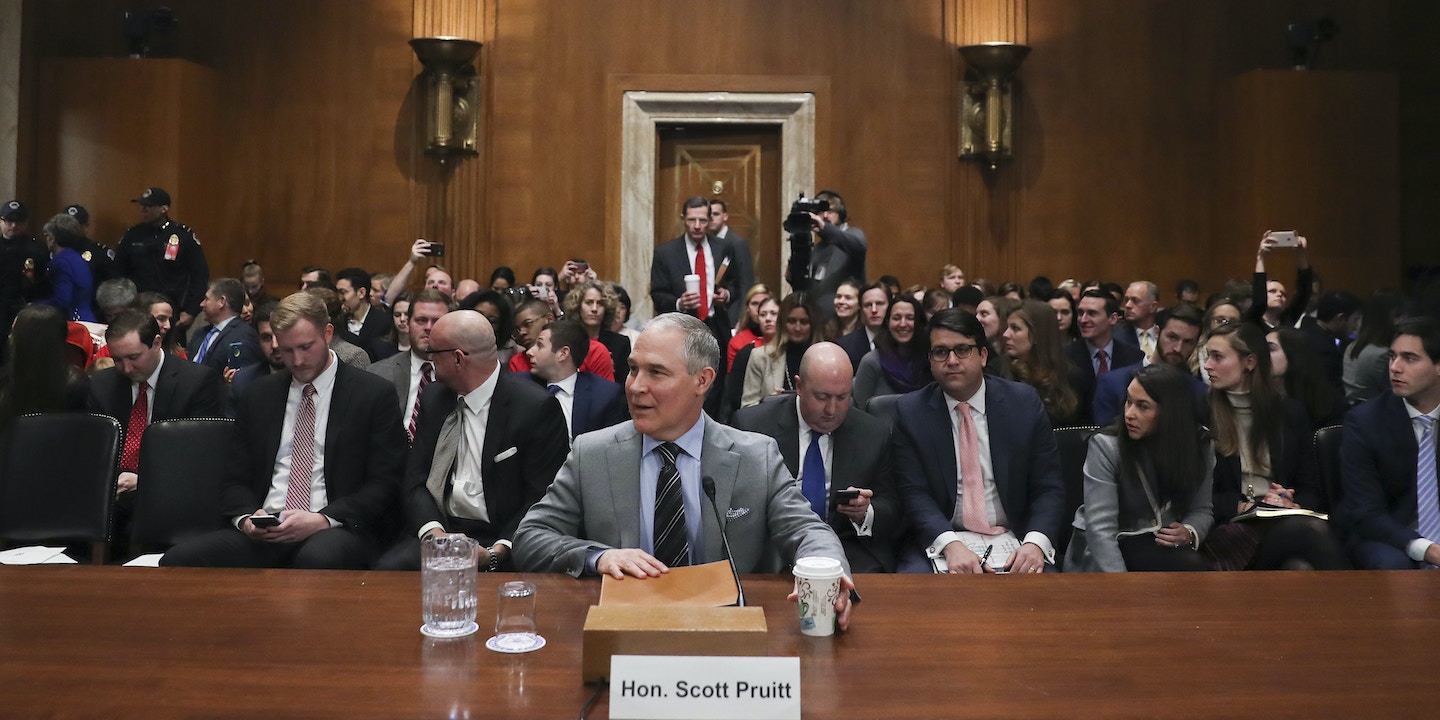 Appearing Tuesday at a hearing of the Senate’s Environment and Public Works Committee, Scott Pruitt faced a series of yes-or-no questions he could not — or perhaps would not — answer. Instead the EPA administrator dodged inquiries from committee Democrats with polite smiles and disquisitions on the history of various laws.

Ranking Democratic Sen. Tom Carper was the first to grill Pruitt, who was meeting with the committee for the first time since he was appointed to head the environmental agency last February. After insisting that he wanted “real answers” as opposed to platitudes, Carper asked about the EPA’s decision last week to weaken air pollution protections, which, as Carper noted, is expected to result in increased industrial emissions of arsenic, mercury, and lead.

Pruitt’s reponse: “That was a policy decision that we have authority to make in the interpretation of statute.”

While the administrator continued talking about statutes, Carper pushed further in attempt to get a simple answer. “Yes or no?” the senator asked, but Pruitt supplied neither response, going on to talk about the division of industrial facilities into major and minor emitters of pollutants before summing up his own response as “those are not yes or no answers.”

Pruitt was similarly evasive when Carper tried to nail him down on whether he would attempt to roll back the endangerment finding, the EPA’s fundamental 2009 pronouncement that the buildup of greenhouse gases in the atmosphere endanger public health, which gives the agency the authority to regulate fossil fuels.

“Yes or no, Mr. Pruitt, for as long as you are administrator, do you commit not to take any steps to repeal or replace the so-called endangerment finding? Do you?”

After some hedging — and more prodding from Carper — Pruitt offered that “there’s no decision or determination on that.”

Despite their efforts, several other Democrats also found themselves unable to get a straight answer from the administrator. Sen. Cory Booker, D-N.J., questioned Pruitt’s commitment to environmental justice, pointing to the EPA’s December decision to revise pesticide protections for farm workers. As Booker noted, the EPA is considering lowering the minimum age requirement so that workers under 18 may be able to use dangerous pesticides.

“Do you think that children handling dangerous pesticides is a good idea?” Booker asked. The question went unanswered as Pruitt pointed out that the proposed rule change is currently under review and open to public comments.

Sen. Tammy Duckworth was perhaps the most pointed in trying to get a response from the administrator, challenging his commitment to addressing lead poisoning among other environmental threats. Though Pruitt announced at the hearing that he was looking “forward to conducting a war on lead,” Duckworth responded that “your rhetoric does not match your actions.”

Duckworth, an Illinois Democrat whose constituents have struggled with lead poisoning, noted that under Pruitt’s leadership, the EPA had recently announced that it would be delaying implementation of the lead and copper rule, which is aimed at reducing those contaminants in drinking water.

“That doesn’t sound much like a war on lead,” Duckworth commented before trying to get a straightforward commitment from Pruitt to reverse that decision.

“Yes or no, will you direct EPA to finalize this rule in 2018 instead of waiting two whole years as recently announced?” Duckworth asked.

Pruitt began to review the original 1991 Lead and Copper Rule when Duckworth cut him off.

Republican senators had far less contentious interactions with Pruitt, often thanking him for his positive effects on local business and employment rates.

“You’ve been doing a great job,” Oklahoma Sen. James Inhofe said, going on to praise the EPA administrator for providing a boost to business. Inhofe, a Republican who has famously decried climate change as a hoax and received more than $1.8 million in campaign contributions from the oil and gas industry, didn’t have many questions for Pruitt. But he did comment on his Democratic colleagues. “I get the impression they don’t like you.”