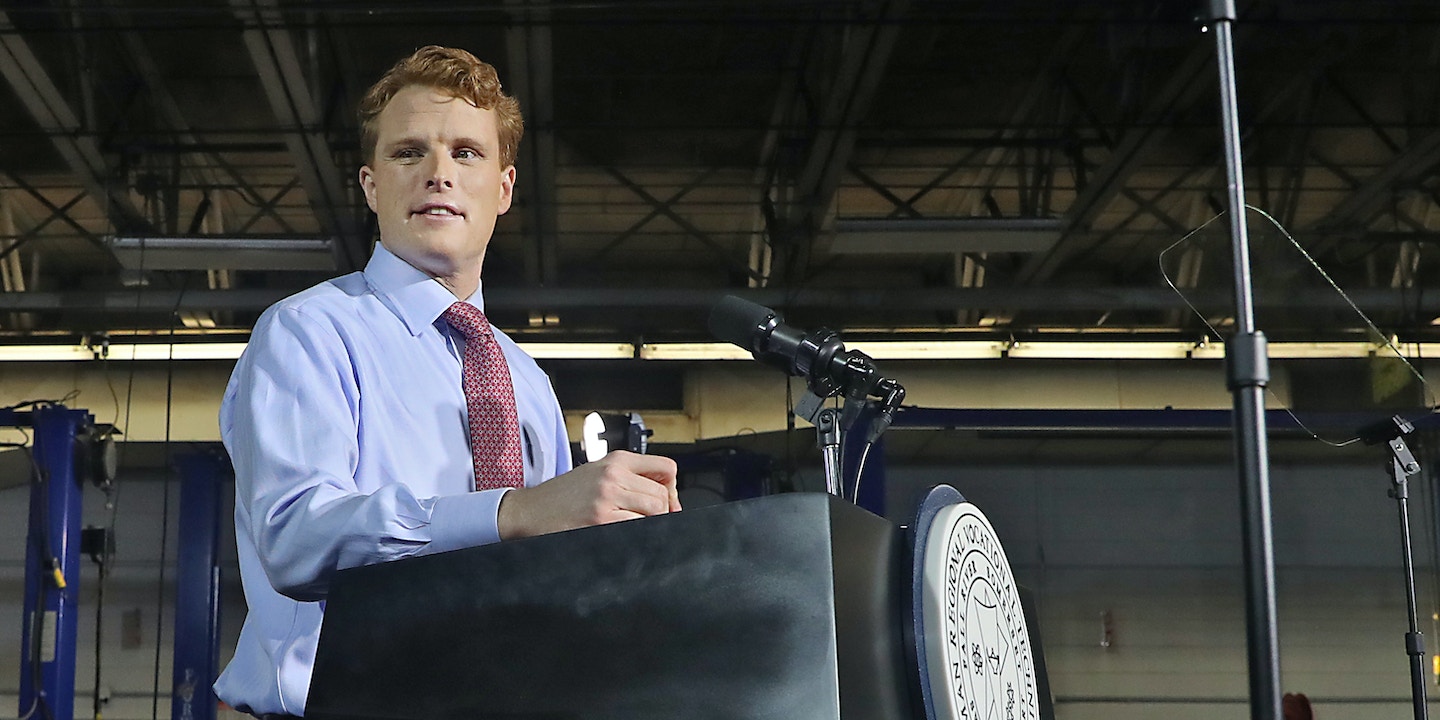 In his response to the State of the Union on Tuesday night, Rep. Joe Kennedy, D-Mass., emphasized his concern for the “parent whose heart is shattered by a daughter in the grips of an opioid addiction,” promising a health care system that focuses on the addiction crisis.

But like many bipartisan promises to solve the opioid crisis, Kennedy is the latest politician to talk tough about solving the problem while giving the pharmaceutical firms at the center of it a pass. His most consequential action as a federal legislator, meanwhile, was to push a bill that gave the opioid industry a shot at watering down prescription guidelines first implemented by the Obama administration.

Asked for comment on Kennedy’s role in fighting the drug companies responsible for the opioid crisis, Kennedy’s office sent a statement focused on other ways the congressman has addressed opioid addiction.

“He was a leader in defending access to behavioral health care against Republican attacks last year, ensuring treatment is within reach for any American suffering from addiction. He has introduced legislation to strengthen prescription drug monitoring programs and increase enforcement of critical mental health parity laws that protect insurance coverage for those with substance use disorders. At home in Massachusetts he secured the High Intensity Drug Trafficking Area designation for Bristol County in order to give local and federal law enforcement increased funding to pursue those supplying illegal opioids,” said Dan Black, Kennedy’s spokesperson.

Lawmakers of both parties have largely responded to the soaring opioid addiction crisis by stressing mental health, diversion, and rehabilitation facilities to treat addicts. That much has been well-received. But most politicians have avoided tackling the pharmaceutical firms at the root of the crisis.

Pharmaceutical companies, led by Purdue Pharma, the maker of OxyContin, helped fuel the current overprescription problem by orchestrating a campaign to persuade doctors and patient groups to exaggerate the benefits of opioid painkillers for a variety of ailments, while downplaying the addiction risk.

The mass marketing campaign has led to an unprecedented flow of painkillers into the American health care system, which has spilled over into the black market and heavily influenced the heroin epidemic. Americans, who constitute less than five percent of the world population, consume about 81 percent of the global supply of oxycodone products (the active ingredient in OxyContin) and nearly 100 percent of hydrocodone (the active ingredient used in brands, such as Vicodin). Many heroin addicts begin using the drug after abusing prescription opioid painkillers, which have an almost indistinguishable effect on the brain as heroin.

For years, many politicians simply punted on the role of the drug industry. The Senate Finance Committee pledged to investigate the role of opioid industry front groups pushing the claim that the drugs weren’t addictive, but the committee mysteriously never released its findings. Under pressure to challenge health care distributors responsible for supplying known opioid pill mills, Congress moved to make it even more difficult for federal agents to halt the flow of addictive drugs.

In state after state, pharmaceutical painkiller companies, using lobbyists and industry-funded patient groups, have killed bills designed to curb the overprescribing epidemic. Though state attorneys general have increasingly taken the lead in filing lawsuits against opioid drug firms, the industry’s influence is still apparent. In West Virginia, one of the states hardest hit by the addiction crisis, Attorney General Patrick Morrisey ended several state lawsuits against drug distributors that allegedly supplied opioid pill mills. Morrisey, it turns out, is a former lobbyist and attorney who had previously represented a trade group for the largest opioid distributors, including Cardinal Health. His wife has also worked as a lobbyist for Cardinal Health.

One of the few federal efforts to stem the tide of prescription painkillers is the voluntary opioid prescribing guidelines created during the Obama administration through the Centers for Disease Control. Those guidelines, which were aggressively attacked by drug companies, bring us to the role of Kennedy.

As we reported in 2016, Kennedy helped sponsor legislation backed by the drug industry that will provide a second shot at revamping the CDC guidelines. Under the bill, which Kennedy cosponsored with two Republicans, Pete Olson of Texas and Susan Brooks of Indiana, industry representatives will likely have a seat at the table at an inter-agency effort to potentially unravel the guidelines, which discourage opioids for minor and chronic pain issues.

Records show opioid manufacturers and distributors and their allies lobbied for the Kennedy bill and later donated to his congressional campaign committee.