Tech Companies Are Under Pressure Everywhere Except Where It Matters

The only place seemingly unconcerned with Big Tech’s concentrated power is the agency that might be able to do something about it: the FTC. It was the year of the tech backlash. Throughout 2017, Facebook, Google, and Twitter were hauled before Congress to answer for their roles in election hacking. More and more prominent political, business, and media figures warned of the growing power of the technology giants, and some offered solutions rarely uttered in this country: breaking the companies up and/or turning them into public utilities.

At Davos last week, Salesforce.com CEO Marc Benioff attacked his fellow Silicon Valley behemoths, saying that regulators “have no choice” but to intervene and diminish their power. Billionaire investor George Soros said he considered Facebook and Google to be monopolies, calling them “unsustainable” and “doomed.” Even representatives of the tech platforms acknowledged in Davos that they needed a little more regulation.

The only place where such concerns seem to be entirely absent is within the one agency that might be able to do something about it: the Federal Trade Commission.

The only person who doesn’t seem to agree happens to be a lead economist at the regulatory body that oversees the tech industry. Patrick DeGraba, who works in the FTC’s antitrust division, said in remarks at the New York State Bar Association that there’s no market power evident online, because consumers have other good options. “When it comes to online search, nothing stops him from going to Bing,” DeGraba said about the everyday internet user by trade publication Global Competition Review. The same “competition is a click away” theory held for Amazon’s online shopping, DeGraba said; he said he could just go to Walmart.

Yes, Google handles 63 percent of all desktop search queries, and over 94 percent of mobile search, according to analyst Statista. Google and Facebook control between 60 and 70 percent of online advertising market share in the U.S., and about 99 percent of all new ad dollars.

On the other hand, we do have Bing.

This flippancy on the part of senior FTC staff is indicative of how unseriously the agency is taking its mission. In fact, it takes real effort to figure out if the FTC exists at all, a year into the Trump presidency.

It takes real effort to figure out if the FTC exists at all, a year into the Trump presidency.

Last week, the White House officially named four nominees for the five-member FTC board to the Senate. They were the first such nominations under Donald Trump; the board has been operating with just two members for over a year. Democrat Terrell McSweeny’s term has already expired; she’s just sticking it out until replacements are confirmed. Republican Chair Maureen Ohlhausen just got named to a federal judgeship.

“It’s extremely odd for the FTC to operate with only two commissioners for this long,” antitrust attorney Reed Freeman told the National Law Journal. And even more so when the two commissioners are essentially lame ducks.

The uncertainty at the top is reflected in the FTC’s inaction. Where agencies like the Securities and Exchange Commission or the Environmental Protection Agency have aggressively moved to deregulate on behalf of big business, the FTC has tried very hard to make no sudden movements whatsoever, even as industries under its purview continue to consolidate.

The FTC allowed Amazon to acquire Whole Foods after a short review and a three-sentence statement. It neglected to review Facebook’s purchase of the upstart social media app called tbh, or any of Google’s litany of acquisitions in 2017. A Supreme Court suit over American Express could degrade antitrust enforcement of tech companies if they benefit consumers with “free” access. But although former antitrust officials, law professors, and the current head of the antitrust division of the Justice Department, Makan Delrahim, have weighed in on the matter, the FTC has issued no amicus brief on the subject, which directly affects their agency. Big Tech has engaged in record lobbyist spending over the past year, but it’s unclear whether its lead regulator even noticed.

“The Justice Department’s antitrust division is doing stuff,” said Matt Stoller, a fellow with the Open Markets Institute, a leading antagonist of the tech platforms. “Ajit Pai is a bad man, but the [Federal Communications Commission] is doing stuff. The FTC’s silence is embarrassing.”

The lack of concern over tech platforms at the staff level should rankle people even more. In 2013, FTC staff wanted to sue Google over its preferential treatment to its own products in search, but the political staff overruled them. For a year, there’s been almost no political staff in place, but if anything there’s even less appetite for enforcement.

As a result, the FTC has ceded leadership on cracking down on the tech giants to Europe, where new data privacy rules scheduled for implementation in May have the potential to upend Facebook and Google’s business model. U.S. antitrust has been completely left behind because of its reliance on outdated models and unwillingness to disrupt Silicon Valley’s preferred path.

If it chose to use its own power, the FTC could really make a difference. “The FTC really hasn’t used its authority in decades and has tried to rein in its own authority,” said Sandeep Vaheesan, a regulatory counsel for the Consumer Financial Protection Bureau. Section 5 of the FTC Act gives the agency open-ended authority to police mergers and prevent anti-competitive conduct, but a 2015 “statement of principles” claimed it would interpret that section narrowly. “Its preferred approach has been to say, ‘Stop doing the bad thing that you’re doing,’” Vaheesan said, “instead of going after the company and saying, ‘We’re going to break you up.’”

The FTC doesn’t just come up short in the tech sector. The agency hasn’t blocked the merger of Luxxotica and Essilor, which would create near-total dominance in vision care and eyewear. Though it’s supposed to have priority enforcement over pharmacies and pharmacy benefit managers, the FTC will apparently pass scrutiny of CVS Caremark’s purchase of Aetna to the Justice Department, despite reports that CVS’s PBM is slashing reimbursement rates for independent pharmacies and then offering to buy out their stores. In the one area where the agency has had prior interest — hospital mergers — it has gone relatively mute despite significant concentration, including the proposed mergers of four of the biggest hospital chains. 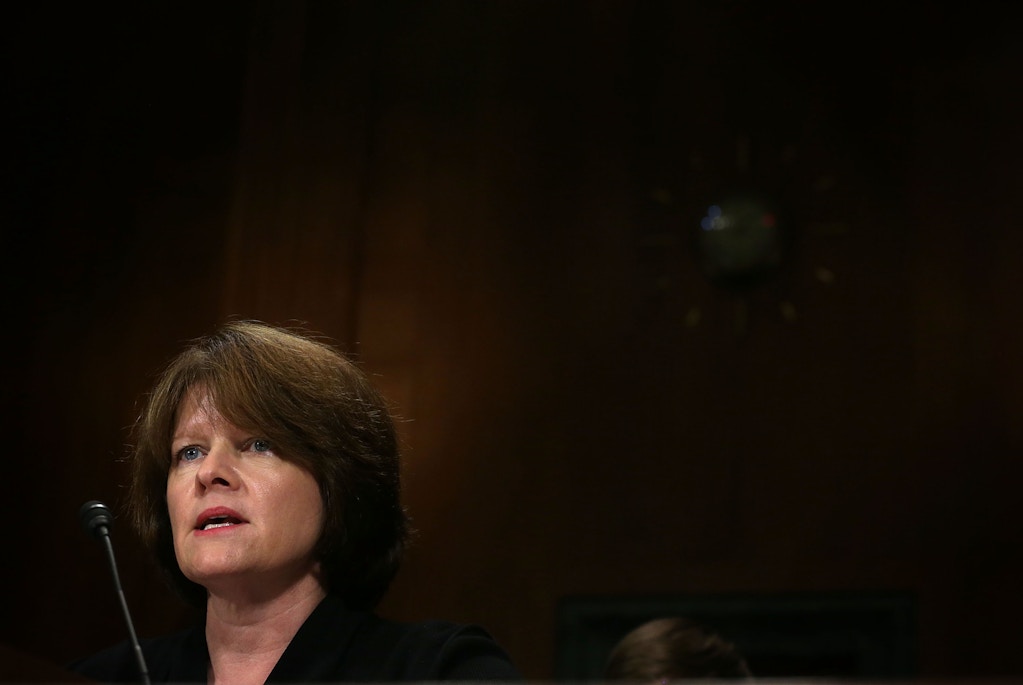 Federal Trade Commission Commissioner Maureen Ohlhausen testifies during a hearing before the Privacy, Technology and the Law Subcommittee of Senate Judiciary Committee May 11, 2016 on Capitol Hill in Washington, D.C.

Filling vacancies at the FTC stumbled over an unrelated issue. The White House announced its “intent” to forward nominees to the Senate in October. The slate was expected to include Noah Phillips, former chief counsel to Senate Majority Whip John Cornyn. But Cornyn’s anger over the White House’s lowballing of funding for Hurricane Harvey relief efforts delayed the formal nominations; in fact, Phillips was left out of the intent to nominate announcement. The other nominees were effectively held hostage until the disaster relief funding spat got resolved.

The nominations may bring some stability to the agency, but perhaps not forward motion. Trump selected three Republicans: antitrust lawyer Joseph Simons (as chair), Phillips, and Delta Airlines executive Christine Wilson. None would be expected to deviate from the establishment antitrust bar, where all of them served at some point in their careers.

Only three members of the five-member FTC panel can be from the president’s party, and the Senate leader of the opposite party typically gets their way in determining the minority members. But Trump has already shafted the Democrats somewhat by shifting around who gets what commissioner slot, enabling Simons to take a longer term and giving the Democrats the shorter ones.

Only one Democratic nominee has been advanced thus far: Rohit Chopra, an Elizabeth Warren protégé and CFPB veteran. That selection came after pressure on Democratic leader Chuck Schumer to choose someone with a strong commitment to antitrust and consumer protection. Schumer was initially set to pick his former chief of staff David Hantman, previously a lobbyist for Yahoo and Airbnb who had opposed regulation of Big Tech, before the outcry.

Schumer has since recommended his chief counsel, Rebecca Kelly Slaughter, for nomination to the FTC, according to a Reuters report. Slaughter, a point person on tech policy for the senator, may not be seen as aggressive enough on antitrust enforcement to satisfy the loud rumblings for real action against Big Tech. And should the presidency turn to the Democrats in 2020, the party representatives in place at the FTC in the minority positions would be primed to lead the agency, as Pai did at the FCC.

Having anyone at the FTC who understands the fundamental threat of concentrating the enormous power over communications and daily life into so few hands would be an advance over the agency’s sclerotic viewpoints today. This puts Schumer, already wobbly with the liberal base after a much-criticized end to the government shutdown fight, in the hot seat to deliver a good choice.

Update: Jan. 31, 2018, 2:11 p.m.
This piece was updated to confirm that Chuck Schumer has recommended that the White House nominate Rebecca Kelly Slaughter to the FTC.