Fourth-quarter fundraising results are in. They show that insurgent progressive candidates are beginning to out-raise their centrist Democratic opponents. 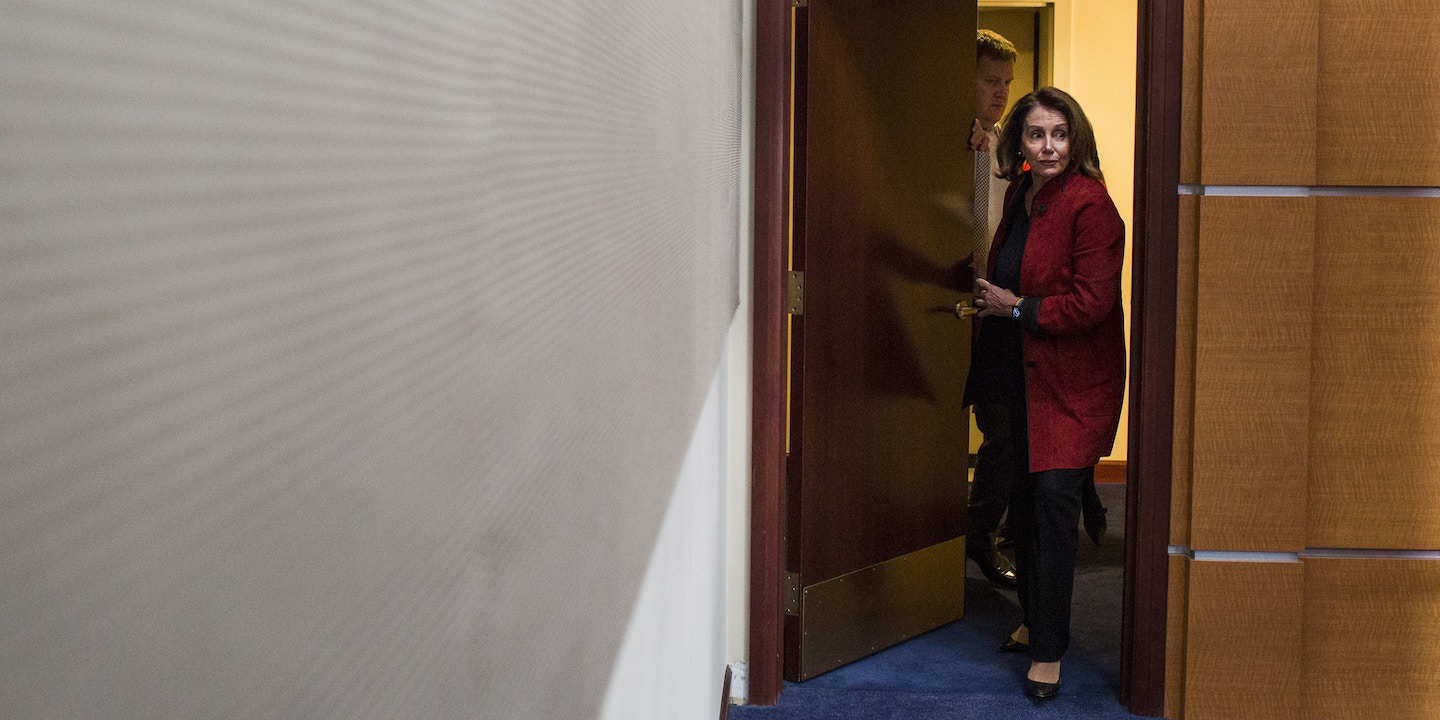 At least six progressive insurgents managed to out-raise their establishment Democratic opponents in House races in the final quarter of 2017, a stunning development that threatens to upend the way the party goes about selecting candidates.

In House races across the country, the Democratic Party has endorsed or given support to particular candidates in competitive primaries, helping them raise big money from corporate PACs and high net-worth donors en route to amassing a war chest capable of taking on Republicans. That strategy, as The Intercept reported last week, shapes the kinds of candidates that end up representing the party, and the issues they focus on in Washington.

Among Democrats in Washington, the conversation around money and politics is one of lament. Big money, it is widely agreed, is corrupting to democracy, and pushes politics in an unpleasant direction. But money is an essential part of the game, so until a new system is created, it just is what it is. Money talks, in other words, and bullshit walks.

But a rival strategy, first attempted by the Howard Dean presidential campaign, then adopted in part by Barack Obama, and later in full by Bernie Sanders, is now going local, fueled by second-generation national online groups like the Progressive Change Campaign Committee, Democracy for America, and MoveOn, as well as new ones, such as Our Revolution and Justice Democrats. In short, candidates who campaign on populist, progressive platforms find grassroots supporters who can collectively rival the corporate donors who have powered the party for so long.

“Our movement is developing an alternative infrastructure to support populist campaigns so they never have to court the big corporate donors who push so many Democrats away from a working class agenda,” said Waleed Shahid, communications director of Justice Democrats, a group pushing for more populist progressives in the Democratic Party.

Ammar Campa-Najjar is running in California’s 50th district against Republican Duncan Hunter and Democrat Josh Butner, who has the backing of the New Democrat Coalition PAC, which represents the pro-Wall Street wing of House Democrats. Campa-Najjar raised more than $175,000, largely with small donors, in the fourth quarter, to Butner’s roughly $105,000. Hunter, meanwhile, is spending more on legal fees to fend off corruption charges than he’s pulling in.

Jess King is running in Pennsylvania’s gerrymandered 16th district, which currently covers Lancaster, Reading, and the Amish country in between (though a court last week ordered that the state’s congressional map be redrawn). In the fourth quarter, she pulled in $195,000, well more than the incumbent Republican Lloyd Smucker, whose haul was just $133,000. Christina Hartman, endorsed by EMILY’s List and most of the top Democrats in Pennsylvania, brought in $185,000. For all of 2017, Hartman, who ran unsuccessfully for the same seat in 2016, outpaced King by $100,000, but the final quarter reflects shifting momentum.

In Illinois, Marie Newman, challenging incumbent Rep. Dan Lipinski, outraised one of the most conservative Democrats in the House, pulling in $260,000 to his $228,000 (though she did so with the help of a $100,000 loan to herself). Lipinski has an enormous amount of cash in the bank, having been in office since 2004 and facing little opposition, but his opponent’s fourth quarter fundraising signals that his re-election is far from guaranteed.

Campa-Najjar, King, and Newman have all rejected the notion that Democrats need to moderate their messages to win the support of Trump voters, and instead are focused on energizing a different kind of voter.

Newman has the backing of NARAL Pro-Choice America, the Human Rights Campaign, immigrant rights groups, and a host of national progressive organizations. Lipinski has traditionally had the backing of the state machine and its labor unions, but cracks in that wall may be forming. The Illinois Federation of Teachers plans to make its endorsement decision this weekend and the national AFT will follow the locals lead, a spokesperson said. That it is even an open question given Lipinski’s longtime relationship with labor suggests Newman has a real chance of winning the endorsement.  EMILY’s List announced Friday it is endorsing Newman.

The endorsement came after news that the SEIU, which has thousands of members in the district, was breaking with Lipinski, who recently came out against the union’s signature $15 per hour minimum wage. Politico’s Illinois newsletter reported this morning that the union would be endorsing Newman, which was confirmed by The Intercept. (Campa-Najjar and King were both highlighted in last week’s story; we wrote about Newman separately.)

Fundraising totals are a key metric for Democratic officials when deciding whether to get involved in party primaries. The party tends to back candidates who can raise large amounts of money as quickly as possible, a strategy that has long hampered progressives.

But the recent fundraising numbers by outsider candidates suggest populists and progressives, relying on grassroots, small-dollar fundraising, are proving they are just as capable at raising significant funds as party-backed centrists.

In the Illinois race, in which Newman is challenging Lipinski, a sitting member of congress, there is a stark contrast in the type of money raised by each candidate. More than 50 percent of Lipinski’s campaign dollars last quarter came from political action committees, largely from corporation interests such as the American Petroleum Institute, a trade group for oil companies; insurance giant Aflac; Chevron; and American Airlines. PACs aligned with the Democratic Party also funneled cash to Lipinski. House Minority Whip Steny Hoyer, Rep. Linda Sanchez, and the Blue Dog PAC contributed to Lipinski’s reelection effort.

For Newman, only about 6 percent of her fourth quarter fundraising total came from political action committees, and her PAC money came from grassroots groups such as NARAL and MoveOn. Newman’s campaign was largely sustained by small-dollar donations and the loan she made to her own campaign.

“Progressive populists have the momentum because they are powered by the small-dollar, grassroots energy at the heart of the Democratic base right now,” said Shahid, of Justice Democrats.

It’s happening in other races, as well. Greg Edwards, running in Pennsylvania’s 15th district, also out-raised the rest of the Democratic field relying largely on small-dollar donors, with the backing the Justice Democrats and the PCCC.

We had a tremendous quarter, thanks to all of you who proved it’s not just a campaign, but a movement!

Our work is far from over. Please help us keep momentum going by making a donation today, letting the GOP know the #BlueWaveIsComing to #FlipTheHousehttps://t.co/TzVuZtzXbs

John Heenan, running as a progressive in Montana against a more established Democrat in the primary, also out-raised his opponent (though did so with the help of a $100,000 loan to his campaign). Laura Moser, running in a suburban Houston seat with a grassroots army of thousands behind her, managed to out-raise her EMILY’s List-backed opponent, Lizzie Pannill Fletcher, though fell short of Alex Triantaphyllis, a former Goldman Sachs analyst running as a Democrat.

Just how long the party establishment can overlook candidates like Sedillo Lopez remains to be seen. After this quarter’s numbers became final, the Albuqurque Journal reported: “Retired law professor Antoinette Sedillo Lopez continues to lead the field in both total donations and cash on hand, followed by former Democratic Party Chairwoman Debra Haaland.” A new entrance to the race, Damon Martinez, also running a progressive campaign, out-raised them both.

It is no doubt disorienting for former party chairs to find themselves trailing in fundraising law professors. And it is turning the tables on some longstanding truisms of Democratic Party politics, the first of which is that lefty candidates play the role of spoiler in races that ought to be left to the serious centrists.

Campa-Najjar’s California district may be instructive of the new future for Democratic politics. Because of the way primaries are run now in California, the top two vote-getters advance to the general election even if both are from the same party. That can lead — and has led in the past — to a general election in a winnable Democratic district with only Republicans on the ballot. That happens when Republicans focus their votes on two candidates while Democrats spread them among three, four, or five. This week, Campa-Najjar won a crucial pre-endorsement vote. A candidate needs at least 70 percent of delegates to move toward the party endorsement, and Campa-Najjar locked down 97 percent.

With that, combined with his sizable fundraising lead and army of volunteers, he is the clear front-runner, but the New Dem-backed Butner, if he stays in the race, could spoil it for both of them. (If Democrats split their votes among a number of candidates, Duncan and a fellow Republican could be the only two to advance to the general election.) “By the progressive metrics and the establishment metrics, we’re winning the race,” Campa-Najjar told The Intercept. “We’ve out-raised Hunter, we’ve out-raised my Democratic opponent, we have a full field team, are canvassing in every major city, phone banking, texting, and we’ve created that infrastructure and still have more cash on hand.”

Butner didn’t respond to an email requesting comment, but he shows no signs of dropping out any time soon. This week, he announced the endorsement of the PAC End Citizens United, which tends to back party-favored candidates that fit his profile as a moderate veteran. (Butner has pledged not to take corporate PAC money, though has many more big-dollar donors than Campa-Najjar, and the New Dem PAC is funded by financial institutions.)

Something like half of California’s 50th district is either Latino or Arab, according to Campa-Najjar, and he is Latino-Arab-American. He is beginning to suspect that his race may have something to do with the national party’s decision not to back him. “Short of my identity being an issue for people for the establishment, I just don’t know by what metric they’re seeing my opponent as more viable,” he said, adding that if it’s his progressive politics the party is afraid of, they don’t understand the reality on the ground. “They might not think that in a district like mine Medicare for all resonates. But it does — for people who are vets and love TRICARE, and the seniors in my district, and the young people in my district, even the Republicans, the young ones, the idea of Medicare for all is not an extreme position for them.”

Campa-Najjar said that the bottom-up movement he’s a part of will ultimately be recognized by the party as not just right, but the smartest way forward. “The people at the top will take a little while longer to catch up with what’s going on at the bottom. I don’t see myself as a rival to the party, but as someone who can be critical sometimes, but more corrective,” he said.

This story was updated to include fundraising by Damon Martinez in New Mexico and a loan taken out by John Heenan.