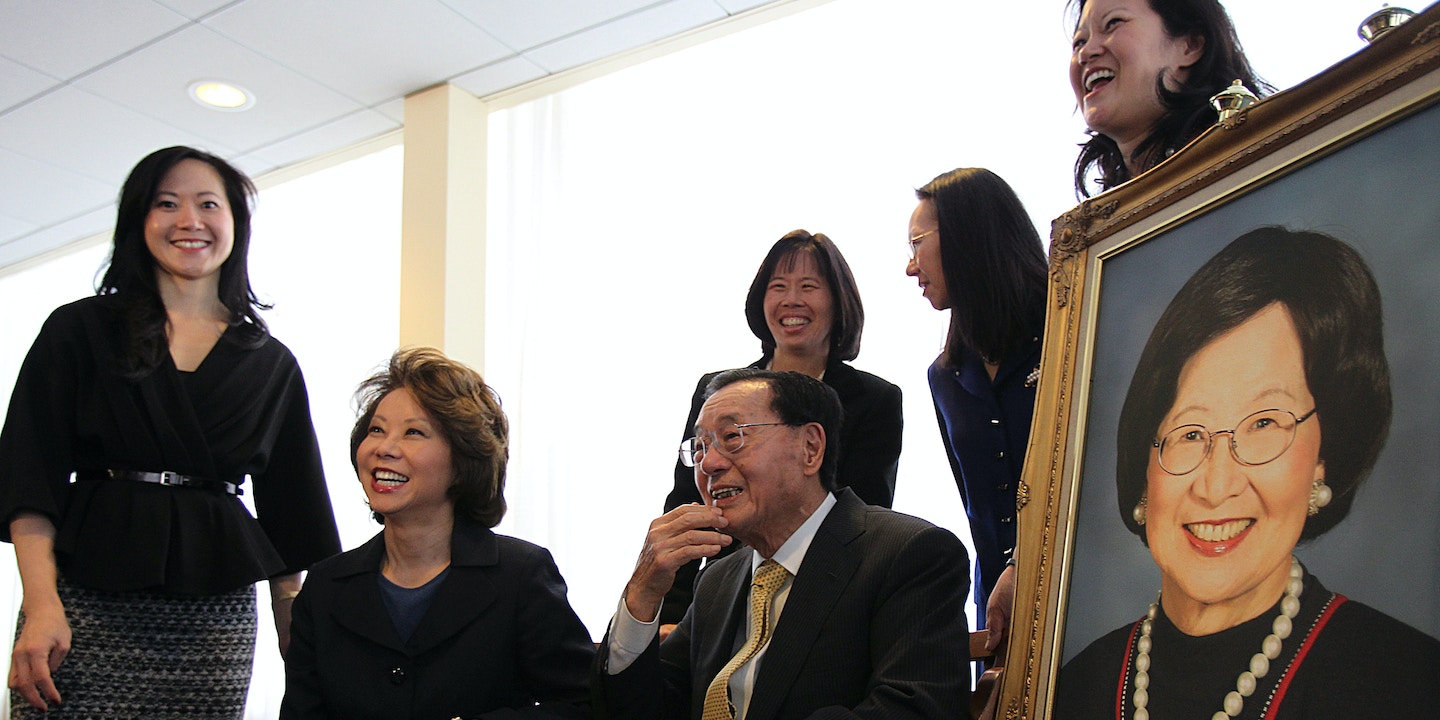 On June 6, 2016, Majority Leader Mitch McConnell joined his wife, Elaine Chao, now the U.S. secretary of transportation, at a ceremony on the Harvard Business School campus to dedicate a new building emblazoned with the Chao family name. Funded by a $40 million gift from the Chao family and its foundation, the building would serve as a new hub for Harvard’s Executive Education program. But the family’s generosity appears to have come at the expense of taxpayers — the money, it turns out, would already have been in the public treasury had it not been sheltered from the government in complex offshore tax havens.

Over a period of five years, millions of dollars were quietly funneled to a Chao family foundation via two offshore firms that list a New York address but are not incorporated anywhere in the United States. Two entities with the same names, however, are incorporated in the Marshall Islands, known as one of the world’s most secretive offshore havens for firms seeking to avoid taxes and a preferred foreign locale for the Foremost Group, the Chao family’s New York-based shipping business. The Foremost Group and a spokesperson for the Department of Transportation declined to comment on where the two donating firms are incorporated.

Chao, notably, has been a key voice in promoting the Trump administration economic policies, including the historic rewrite of the tax code — a legislative accomplishment that is likely the pinnacle of McConnell’s congressional career. The reform shifted the corporate tax code to a territorial system, a move highly expected to reward firms that funnel earnings through offshore tax havens, such as the Cayman Islands or the Marshall Islands. Speaking at the Davos World Economic Forum’s annual meeting in January, Chao called Trump’s “America first” policies “the affirmation of American exceptionalism.” Critics, she noted, “who don’t want to listen to him can leave.”

The connection between the offshore accounts and the donation to the Chao family foundation were found through a search of the Paradise Papers — a trove of more than 13 million leaked documents from tax havens around the world obtained by German newspaper Süddeutsche Zeitung and shared by the International Consortium of Investigative Journalists with reporting partners around the world.

The documents reviewed by The Intercept highlight the extent to which Chao’s family shipping business has made use of offshore jurisdictions. Chao also appears connected to her family’s offshore firms in ways that have not been reported. Both a Chao family foundation website and her LinkedIn page list Chao as having chaired the foundation associated with the Harvard gift.

In response to a request for comment, Marianne McInerney, a spokesperson at the Transportation Department, said in an email that Chao was a volunteer chair for the foundation between 2013 and 2014 and that she “had no day-to-day responsibilities and received no compensation.” McInerney also said Chao has no affiliation with the family shipping business, the Foremost Group. “The Secretary,” she said, “complies with all applicable ethics requirements.”

The Foremost Group did not respond to emails and calls requesting comment.

McConnell married Chao, the daughter of shipping magnate James Si-Cheng Chao, in 1993. James Chao fled the civil war in China to arrive in Taiwan, and shortly thereafter immigrated to the United States, where he began his building an international shipping business. Thanks to the Foremost Group, McConnell and Elaine Chao, one of Washington’s most politically powerful couples, are also estimated to be millionaires many times over. Though Chao has never played a leadership role in the company, her father gave the couple a gift of  between $5 million and $25 million in 2008, according to Politico. McConnell’s net worth was about $26.7 million in 2016, according to a Center for Responsive Politics estimate.

The Chao family’s use of offshore structures came to light in 2014 when The Nation reported that the family business had routed ownership of its cargo ships through a series of opaque registrations in Liberia and the Marshall Islands. The Foremost Group fleet consists primarily of dry-bulk cargo ships carrying commodities, including coal, to ports around the world.

In 2016, ProPublica reported that the Foremost Group had registered a total of 17 cargo ships offshore, mostly via subsidiaries registered in the Marshall Islands. This raised concerns that Chao may face a conflict of interest because her job as transportation secretary involves overseeing the Maritime Administration, which encourages shipping firms in certain sectors to register their vessels in the United States.

“There is no conflict of interest,” said McInerney. She said the department doesn’t regulate foreign-flagged ships, and regulations determine which trades require ships to fly a U.S. flag. Secretary of Labor Elaine L. Chao walks in a parade December 1, 2001 in the Chinatown section of New York City.

A longtime Republican activist, Chao is the first Asian-American woman in U.S. history to become a Cabinet member; she was appointed labor secretary by George W. Bush in 2001. She has also been active in her family’s foundation, the Ruth Mulan Chu Chao Foundation.

In 2010, the foundation received its largest reported donation to date: $17 million from an entity called “Foremost Holdings Corporation,” which the foundation’s public filings list as having the same address as the Foremost Group’s headquarters in New York. Yet a review of state incorporation records found no entity called Foremost Holdings Corporation incorporated in New York — or any U.S. state. Only one company by this name could be located, via a Paradise Papers search, and the firm is registered in the Marshall Islands.

The foundation, in public filings provided to the New York attorney general’s office, labeled donations from Foremost Bulkers Group LLC as contributions received from foreign organizations under exclusion code 24 from the IRS. The IRS guidelines for public foundations note that such contributions indicate that they are “from a trade or business not conducted in the United States and not derived from United States sources.”

Stephen Shay, a tax expert and professor at Harvard Law School, said he does not believe that there would be anything illegal about a foundation’s public tax forms listing an offshore contributor at the address of its U.S. domestic parent company, although such a move “would not seem usual.” Offshore firms try to avoid the appearance of a close business relationship with domestic parent companies, according to Shay, to avoid giving any impression that the offshore subsidiaries might have business activity in the United States that could trigger federal tax liability.

According to the Organisation for Economic Co-operation and Development, when it comes to sharing tax-related information with other countries, the Marshall Islands is one of the world’s least compliant jurisdictions. In December, the European Union placed the island nation on a blacklist of 17 countries across the globe that failed to meet its standards for tax fairness and transparency.

The offshore firms that quietly donated to the Chao foundation are by no means an outlier in the shipping industry. More than 70 percent of large, privately owned U.S. ships are registered abroad, according to an analysis by ProPublica. The Marshall Islands is a popular corporate home for shipping firms, which, in addition to low taxes, enables these firms to skirt federal labor laws that would otherwise govern their shipping crews.

The new building for the Harvard Business School’s Executive Education program was named the Ruth Mulan Chu Chao Center, for Elaine Chao’s mother. In a letter released at the dedication ceremony, former President George W. Bush praised Chao’s father, the founder of the Foremost Group,  for pursing the American Dream and thanked the family for “giving back to the country that has blessed them so much.”

The executive center is meant to be a place for Fortune 500 senior managers and Wall Street bosses to sharpen their financial skills. According to its website, it offers courses — costing up to $80,000 for seven weeks of instruction — intended to, for instance, help executives assess “the competitive forces that distinguish highly profitable industries” and take “strategic actions today that will position your firm for competitive advantage tomorrow.”

Public filings report that the Ruth Mulan Chu Chao Foundation gave $20 million to Harvard in two payments, in 2012 and 2014, along with a donation of approximately $19.6 million in 2016.

Brian Kenny, a spokesperson for Harvard Business School, said in an email that the balance of the $40 million gift was paid in 2016. $5 million of the gift is dedicated to providing financial assistance to students of Chinese heritage, according to the university.

He said the Chao family had been longtime supporters of the school as alumni and participants in advisory groups. “Conversations with the Chao family about philanthropy and engagement with the School more broadly spanned over four decades,” Kenny said, “well in advance of any notion of a new building.”

Citing “respect for the confidentiality of donors,” Kenny declined to comment on the terms of the Chao family gift.

Top photo: The Chao family attends a news conference in October 2012 after Harvard University and Harvard Business School announced a $40 million gift from James S. C. Chao and the Chao Family Foundations in tribute to the late Ruth Mulan Chu Chao, matriarch of the prominent Chinese-American family. Sitting next to her father is Elaine Chao, former U.S. secretary of labor from 2001 to 2009 and current transportation secretary.