The Wilbur Ross Scandal Isn’t About Russia, It’s About Corruption

The commerce secretary’s story played in the news as evidence of further Trump administration ties to Russia, but it’s more about a major conflict of interest. 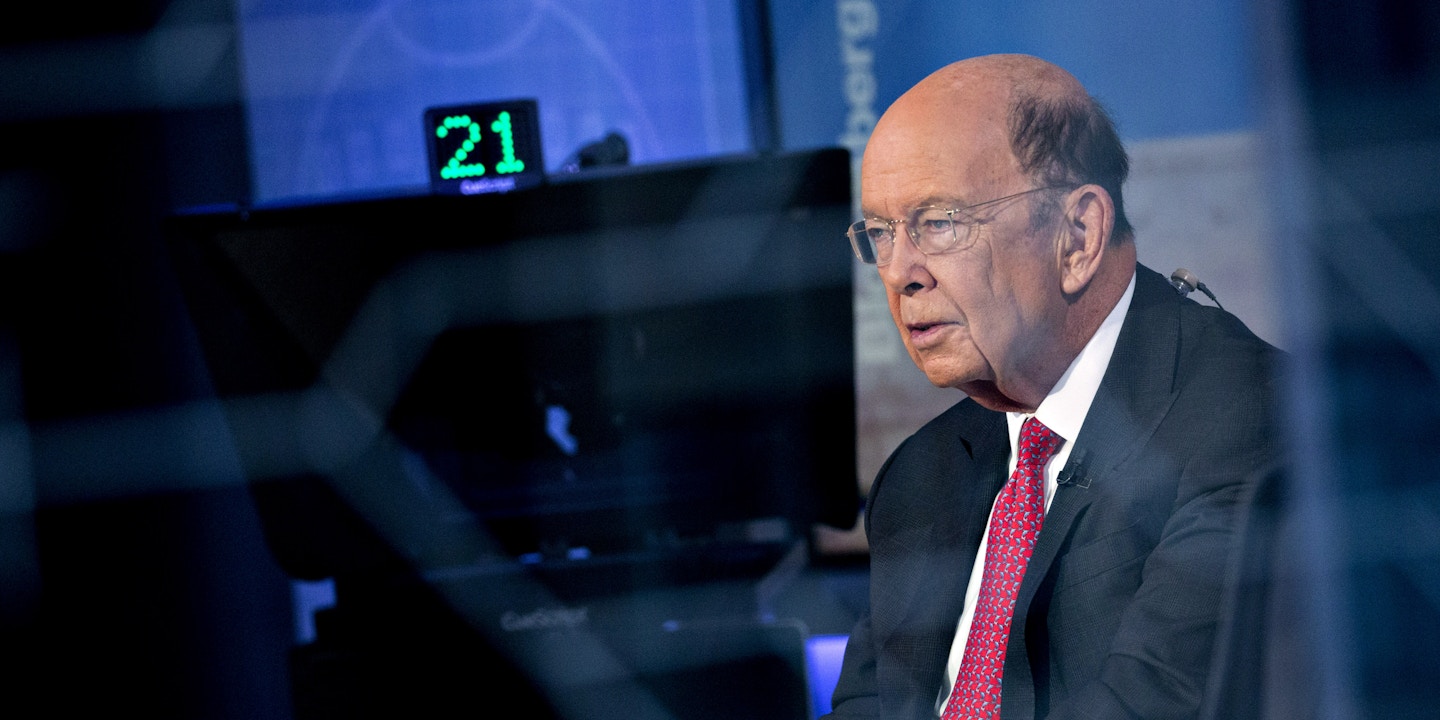 Commerce Secretary Wilbur Ross recently promoted his own agency ethics official, whose job it is to monitor department-wide conduct for ethical lapses. The promotion came just before Ross received scrutiny about his investment in the shipping company Navigator Holdings, which has business ties to Russian oligarchs and members of the Putin family.

The story played in the mainstream press as evidence of further Trump administration ties to Russia, but any billionaire with vast holdings and an interest in the energy industry is likely to have rubbed up against a few oligarchs and Putin cronies. More to the point, Ross’s story is one of an unchecked conflict of interest.

Ross has leaned on the judgments of the Commerce Department’s ethics official, David Maggi, to clear his name after the recent Paradise Papers revelations. Ross explained repeatedly to the media that he publicly disclosed the investment and was cleared to retain the stake by Maggi. Then, his office argued that Ross cannot financially benefit Navigator, because he recuses himself from all matters involving transoceanic shipping vessels, as spokesperson James Rockas told the New York Times and NBC News.

But Maggi was elevated from an alternate designated ethics official to the permanent position sometime after September 5, according to records with the Office of Government Ethics. That means that, after Maggi accepted Ross’s ethics agreement and allowed him to maintain the shipping investment, Ross — who controls hiring for the position — rewarded him with a promotion.

Neither of Ross’s defenses against the charge of corruption hold up under the kind of scrutiny that an independent ethics officer is expected to apply. In the wake of the release of the Paradise Papers, Ross on Tuesday decided to divest the holding, an indication of just how wrong Maggi’s judgment was. The Navigator “disclosure” was buried inside a vaguely named holding company and unknown to the Senate committee who vetted Ross. As for recusal, in May, the commerce secretary personally negotiated a deal to facilitate the transport of American liquefied natural gas, or LNG, to China. Ross touted the deal on CNBC, saying it would open the lucrative Chinese LNG market to American producers and “liberate American energy.” He has cited LNG as a way to reduce America’s trade deficit.

Those deliveries require a vessel carrying the shipment to cross an ocean or, in the common vernacular, “transoceanic shipping.”

Navigator happens to hold “the world’s largest fleet of natural gas carriers” and is well-positioned to transport LNG, particularly out of the United States. In July, Navigator signed an agreement to build an export terminal in Houston for petrochemicals. A member of the Navigator board, Wendy Teramoto, held that position while serving as a part-time adviser to Ross. Teramoto didn’t resign the board seat until July 17 and was then hired as Ross’s chief of staff August 1.

Another firm in which Ross retains an ownership stake, Diamond S Shipping, does significant business with China, and like Navigator, specializes in chartering tankers to oil and gas companies.

None of this should be a surprise. In January, Bloomberg Businessweek reported this nugget:

On the last day of November, President-elect Donald Trump chose Wilbur Ross as his nominee for secretary of Commerce. A few hours later, Ross, a 79-year-old Wall Street multibillionaire, stepped into Gramercy Tavern, a tasteful restaurant for the Manhattan elite, off Park Avenue. A wood-beamed and chandeliered private dining room had been reserved for Navigator Holdings, a liquefied gas shipping company whose biggest investor is Ross’s private equity firm, WL Ross & Co. He and David Butters, Navigator’s chief executive officer, both arrived early. “Your interest is aligned to mine,” Butters recalls Ross saying. “The U.S. economy will grow, and Navigator will be a beneficiary.” Seal of the United States Department of Commerce

Ross’s direct investments in shipping companies while shaping Trump administration trade policy, which inherently requires transportation of goods, has been cited by ethics experts as representing a clear conflict of interest. The relationship between commerce and shipping is not subtle; the Commerce Department logo has a sailing ship on it.

“Ross negotiates a plan for LNG shipments. How does that not involve transoceanic shipping?” asked Jeff Hauser, executive director of the Revolving Door Project at the Center for Economic and Policy Research. “How does [Ross] get away with recusal?” The answer could lie in the peculiar circumstances surrounding Ross’s ethics disclosures.

Navigator Holdings is indeed listed on Ross’s financial disclosure form in three different places, as the commerce secretary is quick to point out. However, the Paradise Papers leak gives more context to the nature of that investment, and Navigator’s business relationship with Russian oligarchs. Offshore tax haven entities controlled by Ross and other financiers hold a 31.5 percent stake in Navigator, a stake worth $176 million currently. Ross has estimated the value of his Navigator investment at between $2.05 million and $10.1 million. WL Ross & Co., Ross’s business vehicle, is still listed as Navigator’s largest shareholder.

Forbes magazine alleged Tuesday that Ross lied to them about his net worth, calling into question the veracity of his financial disclosures. But for the purposes of divining whether a conflict of interest exists, the more important document is Ross’s ethics agreement, dated January 15, 2017 and delivered to Maggi, then listed as an “Alternate Designated Agency Ethics Official” with the Commerce Department.

In the agreement, Ross states, “I will not participate personally and substantially in any particular matter in which I know that I have a financial interest directly and predictably affected.” The only out for this is if Ross obtains a written waiver or exemption allowing him to participate. Rockas, the Commerce Department spokesperson, told the New York Times that “Secretary Ross has never had to seek, nor received, any ethics exemption, and he works closely with Commerce Department ethics officials to ensure the highest ethical standards.”

In Section 10 of the agreement, Ross details the nine rather obscure holding companies in which he retains a financial interest (it is not made clear which holding company the Navigator investment sits inside), and again commits to recusing himself from all matters involving them. Ross writes that “the holdings of these entities are limited to real estate financing and mortgage lending, and transoceanic shipping.” He adds, referring to Maggi directly: “As the senior ethics official for the Department of Commerce, you have advised me that it is not necessary at this time for me to divest the entities identified in this section.”

Maggi signed off on this agreement in January when he was an alternate ethics official. As a listing with the Office of Government Ethics in July shows, the position of Designated Agency Ethics Official, or DAEO, was vacant. Maggi is still described as an alternate in a document signed by Ross on September 5; in that document, Maggi agreed to give Ross a 60-day extension to divest from certain holdings he promised to shed within 180 days of confirmation.

Maggi is now listed at the Office of Government Ethics website as the Commerce Department’s DAEO. Under the law, the head of a federal agency appoints the DAEO, meaning that Ross promoted Maggi into the position sometime in the past two months. Maggi’s office did not respond to a request for the exact date of the promotion or Ross’s role in the process.

The DAEO signs off on any ethics agreements and monitors day-to-day ethics issues within the agency. They would be responsible for issuing waivers for recused officials or providing interpretations allowing those officials to participate in policy matters.

The situation shows the limits of the federal ethics process. Maggi is supposed to be the watchdog for Ross on ethics issues. But after signing off on Ross’s ethics agreement and failing to step in for months as Ross appeared to involve himself in transoceanic shipping matters he was supposed to recuse himself from, Maggi then got a promotion. “The commerce secretary is behaving in a way that’s a prima facie conflict of interest,” said Hauser. “The designated ethics official should rein him in. He hasn’t, and he owes his job to Ross.”

During his confirmation hearings, Ross promised “to be quite scrupulous about recusal and any topic where there is the slightest scintilla of doubt.” He was asked about his investment in Diamond S Shipping, specifically its business dealings with China. Ross refused under questioning from Sen. Maria Cantwell, D-Wash., to recuse himself from broader agency functions like oil spill monitoring, instead agreeing to “rely on the monitoring and judgment of the Department’s ethics officials to ensure that I do not participate in any matter about which they advise me that a conflict of interest would arise.”

This is a familiar move for Ross, deferring to ethics officials to sanction his conduct; he said the same thing to Forbes. In this case, it puts the onus on an ethics official who Ross promoted and could remove at his discretion.

Sen. Richard Blumenthal, D-Conn., alleged in a statement that Ross’s failure to reveal the full nature of his investment in Navigator “misled me, the Senate Commerce Committee, and the American people.” He likened Ross’s financial statements to “a Russian nesting doll,” with conflicts of interests buried within vague-sounding holding companies. Blumenthal has called for an Inspector General investigation into Ross’s financial holdings.