U.S. elites ignore, or even cheer and enable, severe rights abuses as long as the victims are Muslim, only to vehemently object when far more benign offenses happen to them or their friends.

In 2010, civil libertarians encountered a surreal moment: After years of trying, largely without success, to get Americans to care about the assaults on basic rights carried out in the name of the war on terror, these issues suddenly exploded with great prominence to the forefront of our national debate. Suddenly, everywhere one turned, one heard paeans to the importance of privacy rights and the need to balance security concerns with respect for core liberties.

What caused this outburst of civil libertarianism was the implementation at airports by the Transportation Security Administration of new, invasive body-scanning machines that generated quasi-nude images or, if one refused that, physical pat-downs that included the groin area. Unlike far more egregious abuses that Americans largely ignored, if not sanctioned — from putting people in cages in the middle of an ocean for years without any trials to torturing helpless detainees convicted of no crimes to targeting even American citizens for assassination with no due process — these invasive procedures were being applied not just to Muslims, but also to Americans generally of all types. As a result, the TSA machines and pat-downs transformed huge numbers of people into newfound privacy and civil liberties advocates because the rights that they felt were being assaulted weren’t just those of Muslims and foreigners, but their own rights and those of people like them. 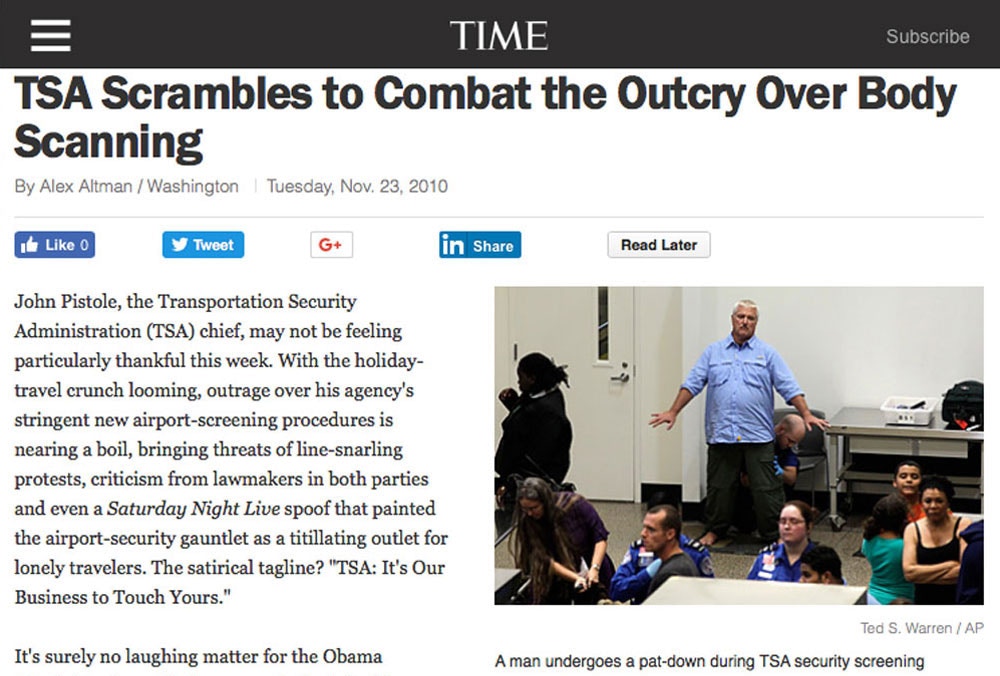 The lesson civil libertarians learned from that episode is that many Americans will remain blissfully ignorant, if not aggressively supportive, of even the most extreme rights abuses — unless they believe that they themselves or people who look like them will be affected, in which case they will become highly agitated in defense of the very same rights that they are more than happy to watch be eroded when the victims are other people. Two widely discussed controversies from this week illustrate this principle quite vividly.

The first is a long-anticipated essay in Harper’s about the #MeToo movement by Katie Roiphe, a longtime critic of various aspects of contemporary feminism and one of the most polarizing writers on these issues. Roiphe’s essay expresses various forms of ambivalence and criticism about what she regards as the movement’s excesses. One of the targets of her criticism is the so-called Shitty Media Men list, a document that was widely circulated among journalists that purported to identify dozens of men in journalism who have allegedly engaged in abusive, assaultive, or otherwise “creepy” behavior toward women.

The objections voiced by Roiphe to this list are ones that have been expressed by many genuine supporters of the #MeToo movement: namely, the accusations it contains are unvetted and unverified; anyone can add accusations on the list while remaining completely anonymous; and because the list purportedly was intended never to be published (a claim Roiphe questions), those accused of misconduct may never know that they’ve been accused and, in all events, have no ability to challenge or dispute the accusations made against them, ones which could nonetheless severely harm their reputations or even destroy their careers. Roiphe’s objection to the list is, in essence, one of due process: It enables people to be punished with no evidence of guilt, no guarantor of reliability, nor any meaningful opportunity to contest the accusations.

In her attempt to induce readers to feel anger over this media list, Roiphe tries to imagine a hypothetical analogue that would be self-evidently infuriating and thus, invites readers to feel the same way about this list. She writes: As amazing, or at least as horrifying, as it is, Roiphe seems completely unaware that the hypothetical list of dangerous “Muslims who might blow up planes” that she asks readers to fantasize exists does, in fact, already exist. It’s called the “no-fly list.” It’s a list compiled by the government in total secrecy, of people (almost entirely Muslims) who the government, with no notice or evidence or process, has decided are too dangerous to board airplanes. In other words, it’s “a secretly circulating, anonymously crowd-sourced list of Muslims who might blow up planes.”

Contrary to Roiphe’s implied claim that the existence of such a list would provoke the intense level of rage and fury she wishes were directed at the Shitty Media Men list, the no-fly list has existed for years and barely anyone has cared. I know this personally because I’ve written repeatedly about it: about American Muslim teenagers who show up at the ticket counter of an airport for a long-anticipated trip to Somalia to visit their grandparents and relatives for the first time only to suddenly learn, to their great humiliation, that their own government has secretly banished them from planes; or U.S. Air Force veterans who live abroad and are barred from visiting their dying mothers for the same reason; or American Muslims detained in Kuwait without charges who can’t be released because the U.S. government secretly declared them unfit to fly. The American Civil Liberties Union has repeatedly sued the government, arguing that these lists are an unconstitutional violation of due process, and have often lost. Roiphe ignored these controversies because, it seems, the victims of these anonymous, due-process-free lists were just black Muslims. She’s become incensed with due process deprivations only now when those being punished — to a far lesser extent than those on the no-fly list — are her white media friends and those who look like her and come from similar backgrounds. Her “hypothetical” example that, in fact, has existed for years reveals that she literally had no idea about these far more extreme rights abuses, and her belief that such a list would provoke rage if it were aimed at Muslims — when the actual list provoked widespread indifference among Americans (including her) — demonstrates how insular and self-absorbed media elites are when deciding which rights infringements bother them and which do not.

Exactly the same dynamic is evident in a seemingly much different controversy: the one provoked by release of the Nunes memo, which claims that the Department of Justice and FBI abused its spying powers by concealing material evidence from the Foreign Intelligence Surveillance Act court in order to obtain a FISA warrant to spy on the communications of former Trump campaign adviser Carter Page. As a result of these assertions, people like Nunes and House Speaker Paul Ryan have spent the last week prancing around as fierce opponents of surveillance abuses and opaque warrant procedures.

But these are the very same people who have spent the last decade empowering, cheering, and enabling exactly these same abuses when they have been directed at Muslim-Americans. Just as is true of Roiphe and those cheering her essay, these Republican authoritarians only care now because the supposed victim is someone who is like them, someone with whom they identify.

Indeed, civil libertarians have spent the last two decades vehemently objecting that the FISA court is a joke, that it rubber-stamps anything the DOJ and FBI want, and that Section 702 of the FISA Amendments Act allows massive, warrantless eavesdropping on Americans. Back in 2014, The Intercept, using Snowden documents, revealed (with their consent) the names of five prominent Muslim-Americans who had been targeted by the National Security Agency and/or FBI for invasive surveillance for reasons that were almost certainly political. Not only did people like Devin Nunes and Paul Ryan never care about any of those abuses — far worse, they actively supported and empowered those abuses. Indeed, just three weeks ago, Nunes and Ryan joined with House Minority Leader Nancy Pelosi and the ranking Democrat on the House Intelligence Committee, Adam Schiff, to increase the domestic spying powers of the Trump FBI and NSA while blocking all reforms and safeguards. That’s because — unlike consistent defenders of free speech (ACLU and FIRE) and consistent defenders of privacy and due process (Russ Feingold and Justin Amash), these charlatans are more than happy for these abuses to occur as long as those subjected to them are Muslim-Americans or people who, for whatever reasons, are powerless in Washington. 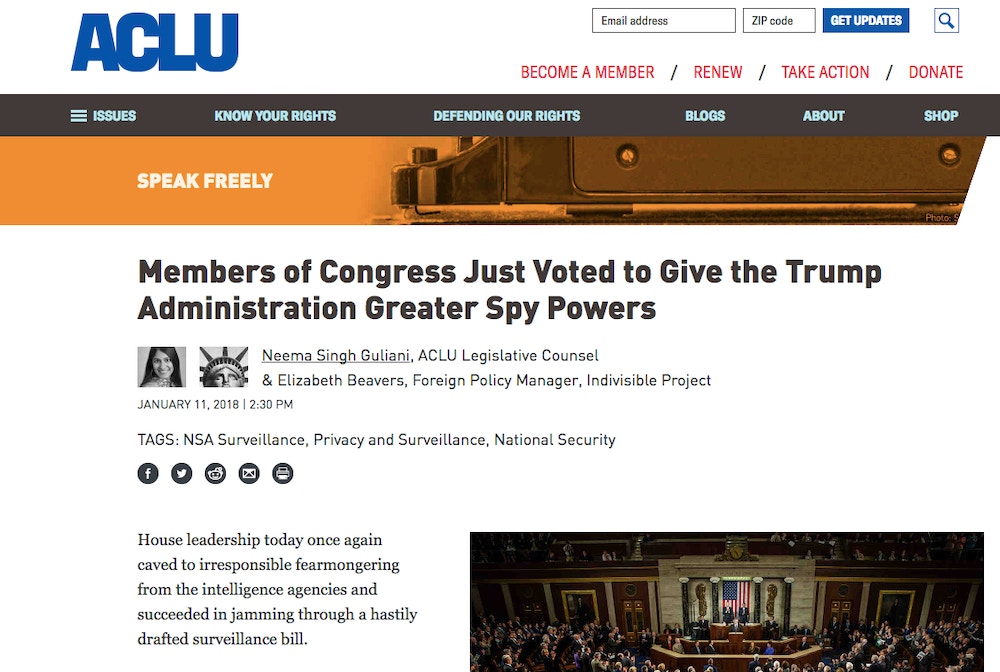 This is one of the most toxic pathologies of America’s ruling class: They are utterly indifferent to the suffering and victimization of the rights and civil liberties of people who are unlike them and distant from them. But as soon as far more benign erosions affect them and those like them, they become shrilly and selfishly outraged.

That’s the dynamic that caused the former ranking Democrat on the House Intelligence Committee, Jane Harman, to spend years vigorously defending warrantless NSA spying under George W. Bush, only to turn into an overnight privacy fanatic when she learned that her own conversations, in which she was plotting with a suspected agent of the Israeli government, had been eavesdropped on by the FBI. It’s why Jonathan Chait writes tens of thousands of words railing against “PC culture” and “the intolerant left” when his friend Hanna Rosin, a professional writer, is criticized, but stays almost entirely silent when far more severe and pervasive censorship — aimed at Israel critics — takes root on American campuses and other institutions. It’s why Democratic Sen. Dianne Feinstein spent decades as one of the most devoted CIA and NSA loyalists — until she learned she had been spied on by the CIA during her torture investigation, when she suddenly discovered the need for safeguards and privacy protections. As the consistent rights crusader Radley Balko put it recently:

Pearl clutching over alleged misleading info on the Page warrant applications reminds me of gasps over the no-knock raid on Manafort. When the political class gets the tiniest taste of injustices inflicted on regular people daily, they make themselves into Mandelas.

If these self-centered outbursts of anger and offense actually engendered an enduring, generalized commitment to the need to safeguard these rights — not just when they affect elites and their friends, but people generally — then one could at least find some value in these episodes even while remaining repulsed at the unprincipled self-centeredness that fosters them. But that almost never what happens.

Instead, people like Roiphe, Nunes, and the rest are not really animated by any principles that can endure or find general application. They’re just motivated by personalized grievance on behalf of themselves and their socioeconomic cohorts. As a result, these episodes produce little beyond special pleading, petulant self-victimization, and the perpetuation of a framework that holds that only elites truly deserve due process rights and core civil liberties protections.