The Maternal, Infant, and Early Childhood Home Visiting program, known as MIECHV, expired in September and is currently operating on leftover funds. 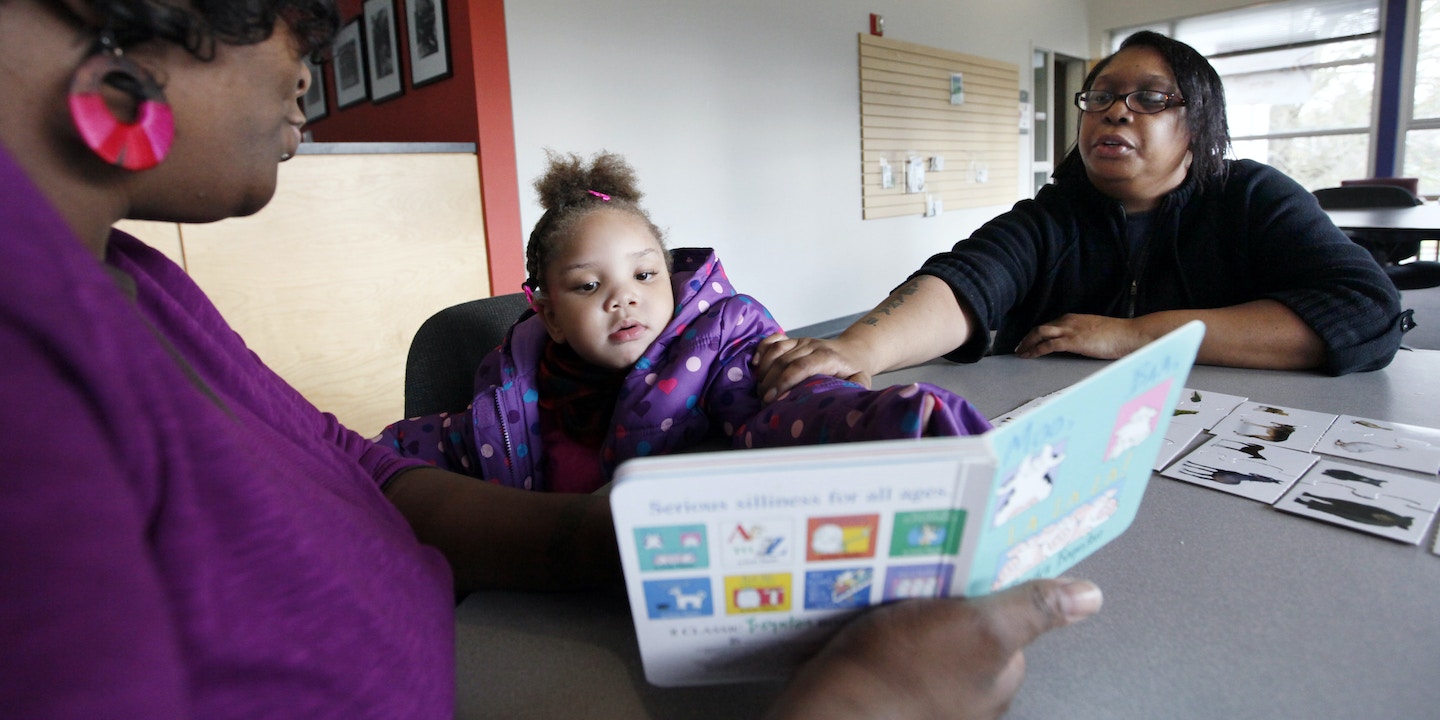 House Republicans passed yet another short-term spending bill Tuesday night to avert a government shutdown. It’s the fifth continuing resolution, or CR, this fiscal year (who’s counting, though?), and while it includes funding for a number of health programs left out of previous stopgap measures, the GOP once again excluded a program meant to help vulnerable new mothers and their infants.

The Maternal, Infant, and Early Childhood Home Visiting program, known as MIECHV, expired at the end of September and is currently operating on leftover funds. A failure to reauthorize the program will lead to enrollment freezes, contract expirations, and staff layoffs. Native American communities, where families disproportionately experience poor health outcomes and scarce funding, would be hit the hardest. The program has been lauded as a model of evidence-based policy by lawmakers on both sides of the aisle, which makes it all the more jarring that more than 120 days have lapsed without reauthorization.

Congressional Republicans, who last year found a way to pay for a $1.5 trillion tax cut bill, have been unable to find a way to pay for MIECHV, which is relatively inexpensive, currently funded at $400 million annually. The House previously introduced a provision that would make states match funds for the program using state, county, and private funds, a proposal that was controversial because it would end the program in states unable to make the match. Republicans have also suggested that MIECHV could be funded only by taking money away from other safety net programs, such as Medicaid or welfare, a proposition opposed by advocates of the home visit program.

“Congress’s failure to include funding for MIECHV in the proposed continuing resolution puts the stability of this evidence-based program at risk and unnecessarily threatens harm to the families who rely on home visiting services,” said Lori Freeman, CEO of the Association of Maternal & Child Health Programs. “Action to renew funding for MIECHV is long overdue and must not be further delayed. AMCHP is committed to working with Congress to ensure that home visiting programs do not get left behind.”

Karen Howard, vice president of early childhood policy at First Focus, said, “We are down to the wire, and our supporters throughout the country are busy right now again calling their senators.”

Congress last month passed a CR that funded the government through February 8, which means lawmakers have until Thursday night to reach a new deal or face another shutdown. The House CR is dead on arrival in the Senate, which is currently negotiating its own deal.

The House CR passed Tuesday includes funding for expired health programs like community health centers and a special diabetes research program, which were left behind in previous spending bills. The stopgap bill even includes a sweeping foster care finance reform bill that the Senate failed to pass in 2016. At the time, Sen. Richard Burr of North Carolina singlehandedly blocked the Family First Prevention Services Act, which would direct funds toward preventing kids from winding up in foster care in the first place, like in cases of maltreatment from drug abuse or lack of parenting skills. The bill also includes two years of funding for community health centers and for the Special Diabetes Program and the Special Diabetes Program for Indians.

Last month, Senate Republicans handpicked the Children’s Health Insurance Program, or CHIP, out of a slew of expired health programs and dragged it into the shutdown fight. The spending bill was, albeit overdue, a win for the millions of children on the brink of losing health insurance. The showdown between Republicans and Democrats in January that led to a three-day government shutdown centered on the fate of 800,000 immigrants who were brought to the United States as minors. The immigrants, known as Dreamers, benefited from the Obama-era Deferred Action for Childhood Arrivals program, known as DACA, that shielded them from deportation. The Trump administration cancelled the program in September, and its protections will end in March. Democrats had said they would not agree to a spending bill that did not include protections for the Dreamers, and on Wednesday, House Minority Leader Nancy Pelosi again urged Congress to take up an immigration bill, reading letters written by Dreamers on the floor.

Congress funded CHIP, which gives about 9 million low-income children health coverage, for an additional six years. The program could have been brought to a vote at any point after its expiration in September. Instead, Republicans slipped it into the stopgap spending bill to entice Democrats into surrendering their DACA demands, essentially making them choose between the Dreamers and millions of children in desperate need of health insurance.

MIECHV expired at the same time CHIP did, but advocates are concerned that it won’t arouse the same outrage as the insurance program did.

“I am disappointed that House Republicans are attaching a partisan health extenders package to the CR,” House Minority Whip Steny Hoyer told The Intercept in a statement. “Republicans’ measure does not include critical public health programs, including the Maternal Infant and Early Childhood Home Visiting program and the Health Profession Opportunity Grant program. I urge the Senate to include these programs and to replace the offsets with a bipartisan agreement.”

Sen. Ron Wyden of Oregon, ranking member of the Senate Finance Committee, told The Intercept that he feels “very strongly” about all the health programs excluded from last month’s spending bill, adding, “We’re all in, we’re pulling out all the stops.” He said he finds it “striking” that Congress would claim to not have the funds for “programs that all together don’t use up a lot of money.”

There are six tribal MIECHV grantees in their final year of funding: Cherokee Nation, Choctaw Nation of Oklahoma, Confederated Tribes of Siletz Indians, Inter-Tribal Council of Michigan, Red Cliff Band of Lake Superior Chippewa, and Yellowhawk Tribal Health Center in Oregon. The longer the reauthorization is delayed, the Association of State and Tribal Home Visiting Initiatives said, the more qualified and experienced staff become uncertain about their job security and leave for other jobs.

Recruiting, hiring, and building a new home visitor up to a full caseload can take about a year in urban areas, and in some rural areas, it can take as long as two years, the Association of State and Tribal Home Visiting Initiatives added in its statement.

Through home visiting programs, professionals like nurses and social workers provide guidance on topics like breastfeeding and safe sleep practices to help new mothers and their infants.

“The Senate must now take action and ensure MIECHV reauthorization is included in its bill to fund the government,” First Five Years Fund said in a statement. “If it isn’t, babies and their families will be denied access to the quality home visiting experiences that are proven to help them lift themselves out of poverty. Congress cannot and should not continue to kick the can down the road and sidestep this vital program that shares widespread support and has been elevated as a priority up to this point.”

In opposing last month’s short-term spending bill, 14 Senate Democrats and independent Sen. Bernie Sanders cited — in addition to the absence of a DACA fix — the lack of funding for disaster relief, community health centers, and other lapsed health programs. Montana Sen. Jon Tester, who was the only Democrat from a red state up for re-election to oppose the bill, primarily did so because it failed to include funding for community health centers critical to his rural state.

This week’s House CR included two years of funding for community health centers. But in a report, the Kaiser Family Foundation said on Thursday that 20 percent of health centers reported instituting a hiring freeze and 4 percent have laid off staff. Another 45 percent are considering a hiring freeze and 53 percent said they might lay off staff, the report found. The delay in funding could have an irreversible impact; 3 percent of responding health centers had already taken steps to close one or more sites and another 36 percent indicated they are considering doing so.

Community health centers are open to anyone, regardless of their ability to pay or insurance status, and are one of the only places unauthorized immigrants can turn to for health care. Almost half of the population served by health centers lives in rural areas, and more than 63 percent are people of color — with the largest group being Latinos.

Funding a health program like this “on a day-to-day, week-to-week, month-to-month basis” ignores factors like the flu epidemic or the nationwide opioid crisis because the spike in patients seeking flu vaccines or opioid addiction treatment is overwhelming centers, NACHC Senior Vice President Dan Hawkins said.

“Next bite of this apple apparently will be sometime before or around February 8” when the current CR ends, Hawkins said. They have already told members of Congress, “It’s too late,” he added. If Congress goes past February 8 without allocating funding, he said, health centers are going to start closing their doors, one out of every three people who rely on these centers will no longer be getting care, and the consequences will be most profound in rural America.