Donald Trump Wants to Make It Easier to Start a Nuclear War. This Should Petrify Us.

With little fanfare, Trump has rolled out a Nuclear Posture Review that allows for a nuclear response to conventional attacks, even cyber ones. 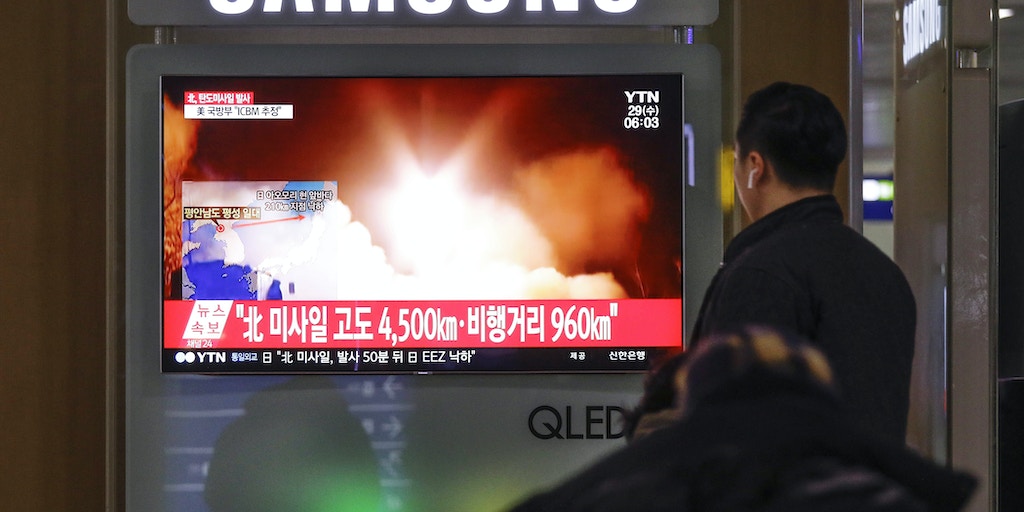 She did try and warn us.

“Imagine, if you dare … imagine him in the Oval Office facing a real crisis,” Hillary Clinton said in her speech to the Democratic National Convention in 2016, referring to her then-Republican opponent, Donald J. Trump. “A man you can bait with a tweet is not a man we can trust with nuclear weapons.”

Yet four months later, in November 2016, almost 63 million of her fellow Americans voted to put the short-tempered, thin-skinned former reality TV star in charge of their country’s 6,800 nuclear warheads. Never forget: As president of the nuclear-armed United States, Trump — Trump! — has the power to destroy humanity many times over, while rendering the planet uninhabitable in the process.

If that wasn’t terrifying enough, last week, less than 72 hours after the State of the Union speech, in which Trump ramped up his war of words with North Korea, his administration announced that it wanted to make it much easier for the president to start a nuclear holocaust.

You might have missed that rather important piece of news. Last Friday, while cable news channels rolled on the Nunes memo, the Pentagon published the latest Nuclear Posture Review, or NPR, which includes two pretty alarming new components.

First, while Barack Obama’s 2010 NPR for the first time ruled out a nuclear attack against non-nuclear weapon states that are in compliance with the Nuclear Non-Proliferation treaty, Trump’s NPR goes in the opposite direction and suggests that the U.S. could employ nuclear weapons in “extreme circumstances” to defend the “vital interests” of the United States and its allies. The document states:

Extreme circumstances could include significant non-nuclear strategic attacks. Significant non-nuclear strategic attacks include, but are not limited to, attacks on the U.S., allied, or partner civilian population or infrastructure, and attacks on U.S. or allied nuclear forces, their command and control, or warning and attack assessment capabilities.

Got that? Trump wants to be able to retaliate against a non-nuclear and perhaps even non-military attack on U.S. infrastructure — say, a cyberattack on the power grid? — with a nuclear strike that could kill hundreds of thousands, if not millions. To call such a move disproportionate would be a severe understatement.

Second, the new NPR calls for the development of a new generation of so-called low-yield nuclear weapons. These smaller nukes, the document suggests, would be tactical, not strategic; deployed to the battlefield, rather than dropped on a city. The problem with this argument is that the atomic bombs used against Hiroshima (200,000 dead) and Nagasaki (70,000 dead) could also be considered low-yield nuclear weapons, in terms of their explosive capacity.

There is also the clear lowering of the threshold for nuclear weapons use: It becomes easier to justify the launch of a small nuclear weapon on the basis of a supposedly lower explosive force. Yet “a nuclear weapon is a nuclear weapon,” as Ronald Reagan’s former Secretary of State George Shultz testified in front of the Senate Armed Services Committee the day before the release of Trump’s NPR. “One of the alarming things to me is this notion that we can have something called a small nuclear weapon … and that somehow that’s usable,” Shultz added. “Your mind goes to the idea that, yes, nuclear weapons become usable. And then we’re really in trouble, because a big nuclear exchange can wipe out the world.”

It would be a worrying development if any president of the United States announced, with little debate or discussion, a plan both to build more tactical nuclear weapons and use them in response to non-nuclear attacks; a nuclear strategy that makes the use of nukes more, not less, likely. But when that president is Donald J. Trump, it should be deemed a national, if not a global, emergency.

Lest we forget, this is a president who, during his election campaign, displayed complete ignorance about the “nuclear triad”; called for an “unpredictable” nuclear weapons policy, while refusing to rule out using nukes against the Islamic State or even in Europe (because “it is a big place”); and asked a foreign policy adviser three times, during a single hourlong briefing, “Why can’t we use nuclear weapons?” This is a commander-in-chief, who since coming to office a year ago, has demanded a tenfold increase in the number of U.S. nuclear weapons; casually threatened North Korea “with fire and fury like the world has never seen”; and began 2018 by bragging on Twitter about his “much bigger & more powerful” nuclear button.

“Giving Trump new nukes AND new ways to use them is like giving matches and gasoline to Curious George,” wrote nuclear weapons expert Tom Collina of the Ploughshares Fund on CNN’s website last Friday. “It will not end well.” Or as one retired senior Army officer told the American Conservative, the NPR provides Trump with “a kind of gateway drug for nuclear war.”

Indeed. And even prior to the publication of this hawkish nuclear strategy document, a Washington Post-ABC News poll in mid-January revealed that 60 percent of Americans did not trust Trump to responsibly handle his “authority to order nuclear attacks on other countries,” while 52 percent of them were “very” or “somewhat” concerned the president “might launch a nuclear attack without justification.”

Remember: The courts may be able to strike down his executive orders as unconstitutional, and Special Counsel Robert Mueller may be able to indict him over collusion or obstruction of justice, but there are no checks or balances on the president’s authority to wage nuclear war. None. Zero. To quote Bruce Blair, a former nuclear missile launch officer and research scholar at the Program on Science and Global Security at Princeton University: “We all need to confront the fact that [the U.S. political system] gives one person the God-like power to end the world.”

The questions, therefore, that matter far more than any other in 2018: Does the narcissist-in-chief plan on using this “God-like power?” Will an impulsive and aggressive Trump get us all killed by launching a nuclear war? Everything else is noise.