“Your cars were present during the trip, but you don’t call that an escort?” 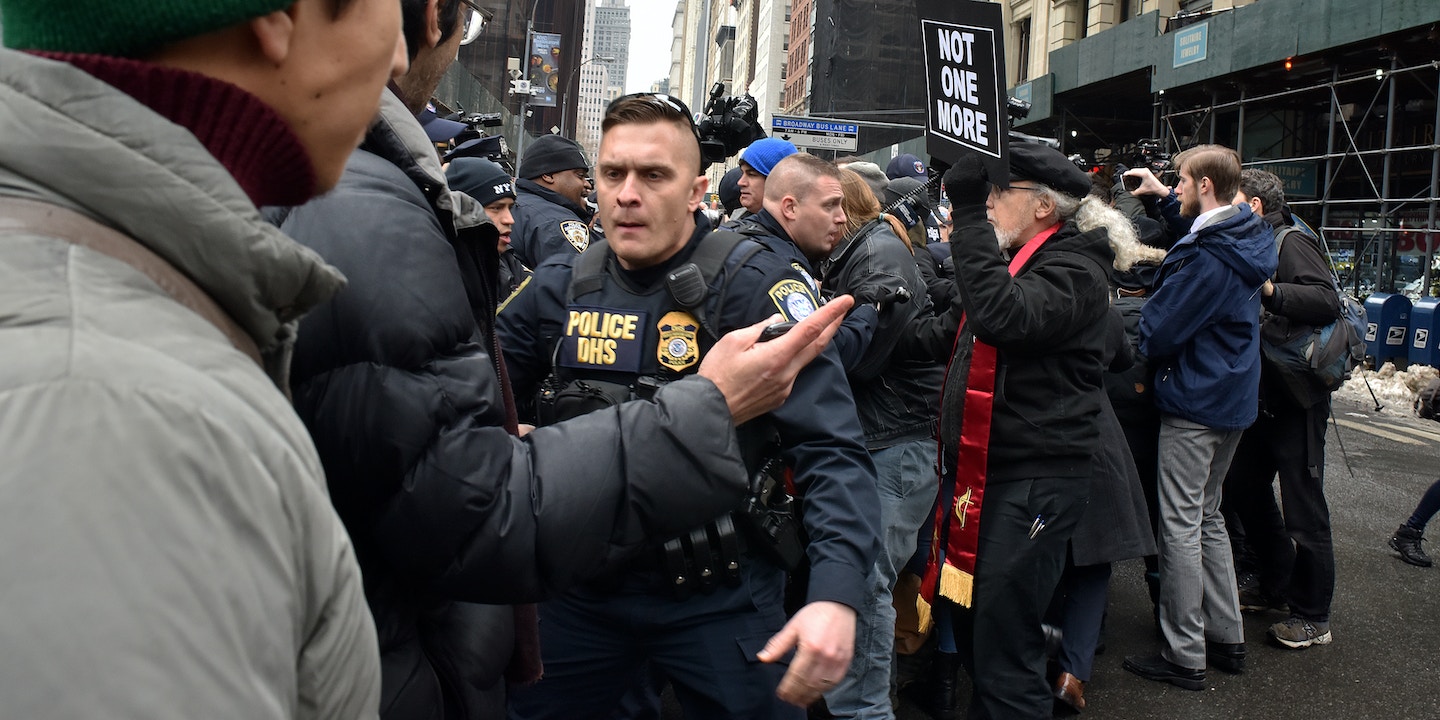 Members of the New York City Council had two questions for the New York Police Department’s brass who testified at an oversight hearing on Wednesday. What exactly happened on January 11, when police arrested 18 protesters and escorted federal Immigration and Customs Enforcement agents as they attempted to deport a leader of the immigrant rights movement? And if the circumstances of that day were to repeat themselves, would the NYPD conduct itself any differently?

The questions go to the heart of what it means to be a “sanctuary city” — an already contested and malleable term — in the age of the Trump administration’s escalating deportation regime, and how far city officials are prepared to go to protect undocumented New Yorkers. For some city council members, the NYPD’s answers were not reassuring, with the police at one point awkwardly denying that their vehicular accompaniment to a deportation constituted an “escort” or cooperation at all.

“What happened on that day was some sort of coordination. You can’t pretend that it didn’t happen.”

“What happened on that day was some sort of coordination,” said an exasperated City Council Member Jumaane Williams, who was arrested at the January 11 protest. “You can’t pretend that it didn’t happen.” He went on: “You were enforcing local laws and I get it, but that was helping someone be deported, period.”

An NYPD lawyer responded to Williams that the charge of police participation in immigration enforcement that day was itself “dangerous.”

On the date in question, Ravi Ragbir, executive director of the New Sanctuary Coalition, was taken into ICE custody during a scheduled check-in at ICE’s New York Field Office. After briefly fainting, Ragbir was handcuffed and placed in an ambulance with ICE agents. Ragbir’s supporters outside used their bodies to block the ambulance in order to prevent his deportation, at which point both Federal Protective Services officers and members of NYPD’s elite Strategic Response Group attempted to clear the way for the vehicle’s passage.

The scrum moved several blocks down Broadway in downtown Manhattan, finally grinding to a halt outside the gates of New York’s City Hall, at which point the ambulance shook free of the protest and drove Ragbir to Bellevue Hospital, where he was examined. ICE then transported Ragbir to Newark International Airport, accompanied as far as the Holland Tunnel entrance by NYPD vehicles, and flew him to Krome Detention Center in Florida.

The documented violence of the arrests that day – tearing clothes, slamming nonviolent protesters to the ground, and, in several instances, choking people – is the subject of an ongoing NYPD investigation; one officer has already been transferred out of the Strategic Response Group. Citing the ongoing investigation and the pending criminal charges against the people arrested that day, NYPD officials refused to comment on details of how the elite Strategic Response Group responded to the protesters in Lower Manhattan.

Other details also remain vague: Council Member Ydanis Rodriguez, who was also among the people arrested on January 11, asked the police delegation how many NYPD vehicles were used to accompany the ICE agents who transported Ragbir. The NYPD did not have an answer. Asked at the council hearing whether it was reasonable for police to assume a health emergency was at hand when the ambulance did not have its lights or sirens on, the police delegation demurred.

In the weeks since January 11, a new local law has gone into effect in New York City that explicitly forbids the use of city resources for immigration enforcement. NYPD officials and spokespeople for Mayor Bill de Blasio have consistently maintained that the police’s actions that day did not constitute collaboration with ICE, and that officers were simply responding to the public safety concerns presented by the protest. De Blasio issued a letter in support of Ragbir this week and has placed the blame for the events of January 11 on a “very purposeful and provocative action” by ICE.

Council Member Brad Lander, however, told the police at yesterday’s hearing that the NYPD’s purported public safety concerns don’t hold water for the period after Ragbir’s arrival at the hospital.

“Up to that point, you guys were responding to a protest,” Lander said. “But at Bellevue, there was no protest. There were no protesters. No one knew he was there until after he was there, and from Bellevue to the Holland Tunnel, I don’t see one iota of reason to believe that there was a public safety risk, and I don’t really believe it was derivative of the protest. So I don’t believe it should have happened.”

“Your cars were present during the trip, but you don’t call that an escort?”

Oleg Chernyavsky, NYPD director of legislative affairs, quibbled with Lander’s characterization of the police accompaniment as an escort. “We didn’t provide an escort,” Chernyavsky said. “We were present during the transport.”

Lander paused, confused: “Your cars were present during the trip, but you don’t call that an escort?”

“We did not have custody of the individual,” Chernyavsky said. “He was not in any of our vehicles. We were present based on a public safety concern.”

“We were present at the scene,” Chernyavsky said.

“By telling me it was justified, you’re telling me it is now our policy, and that very tenuous connections to the possibility of any disruption or protest would justify NYPD escorting,” Lander said. “That is very troubling, because I fear we’re going to see more of it. If those Dreamers start being deported, lots of us are going to put ourselves in the way. And if the possibility that we will means we’re going to escort the ICE deportation machine …. what you’ve told me today makes me less sure and less confident that we’ve got the right policies.”

The question of how the NYPD might respond in the future if New Yorkers undertake civil disobedience to prevent the deportation is far from hypothetical. ICE reluctantly freed Ragbir last week after a federal judge ordered his release in a strongly worded ruling that excoriated the agency for “treatment we associate with regimes we revile as unjust.” But, almost immediately, Ragbir was ordered to present himself once again to ICE’s New York Field Office on Saturday for deportation.

With ICE officials evidently determined to deport Ragbir on Saturday, and hundreds or thousands of Ragbir’s supporters likely to turn out in Lower Manhattan to stop them, the NYPD will once again face the dilemma of how to balance its mandate to preserve order with the city’s commitment not to cooperate in the deportation of New Yorkers.