Harvard’s Laurence Tribe Has Become a Deranged Russia Conspiracist: Today Was His Most Humiliating Debacle

The more the esteemed law professor spews unhinged madness about Vladimir Putin and Donald Trump, the more of a social media and MSNBC star he becomes.

Harvard Law Professor Laurence Tribe did not wait even 24 hours to exploit yesterday’s tragic crash of a Russian regional jet shortly after it took off from Moscow, killing all 71 people aboard. On Twitter this morning, Tribe (pictured above in 2010 with former Vice President Joe Biden) strongly insinuated that the Russian government may have purposely sabotaged the plane, murdering all of those on board, in order to silence one of the passengers, Sergei Millian, who has been linked to a couple of figures involved in the Trump-Russia investigation. What’s wrong with Tribe’s claims? Everything. To begin with, Millian was not on that plane. The official list of victims includes nobody with that name; as the Daily Beast’s Marlow Stern pointed out, the claim that Millian was on the plane was a simple hoax from the internet sewer, 4chan. Tribe apparently saw someone making this claim somewhere on the internet and then, without bothering to check if it was actually true, told his 289,000 followers that it was true, and then constructed a rabid, deranged conspiracy theory around it.

After dozens, if not hundreds, of people told him that what he said was false, Tribe — after more than 2,000 people retweeted it — posted a mealy-mouthed follow-up noting that he can’t “vouch” for the accuracy of the “plenty of reporting” he saw claiming this was true: “reporting” that he still has not identified. Even if Millian had been on the plane, casually suggesting that Vladimir Putin, Donald Trump, or some combination of other villains purposely murdered everyone on the plane in order to silence one witness is deranged to the point of being a clinical pathology. That sort of baseless conspiracy-mongering ought to disqualify anyone from serious company for a long time.

But it almost certainly will have no effect on Tribe’s standing. As BuzzFeed’s Joseph Bernstein documented almost a year ago, Tribe has become one of the internet’s most unhinged cranks, churning out wild conspiracy theories and, in the process, becoming a social media star and MSNBC favorite. Among his lowlights was his promoting of a story from the well-known liberal “fake news” site Palmer Report claiming that Trump paid $10 million to former GOP Rep. Jason Chaffetz. 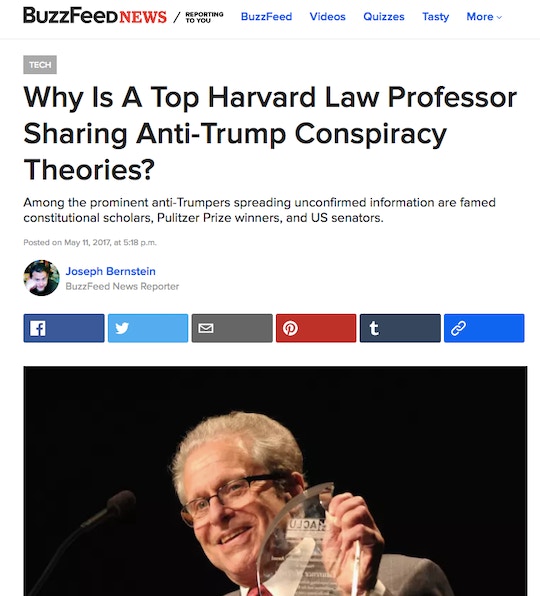 Tribe was also one of the people most responsible for building the platform of Louise Mensch who — among other things — has claimed that Putin murdered Andrew Breitbart and engineered the Ferguson protests. 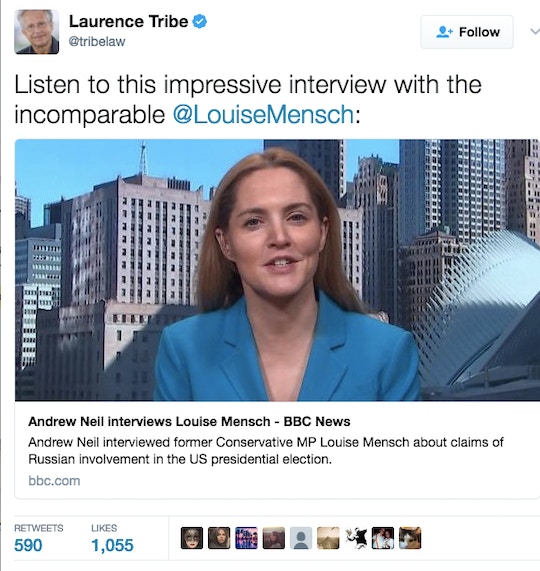 I’ll confess some personal disappointment with all of this, given that — as a law student and then a young lawyer wanting to practice constitutional law — Tribe was someone I had regarded with a great deal of admiration. He was a genuine scholar of constitutional law. But like so many people in the public arena, the combination of Trump’s 2016 victory and the fearmongering specter of Putin as an omnipotent mastermind seems to have broken his brain, or at least the part of it responsible for rational reasoning.

The more deranged he gets, the more Tribe — needless to say — becomes not just a social media star (his Twitter follower count, like most Russia-Trump conspiracists, has exploded over the last year), but has also become an MSNBC favorite, as they exploit his credentials and pedigree to depict his madness as some sort of insightful, investigative dot-connecting. That’s because, as I documented this morning, false claims about Russia are now a routine part of the U.S. media diet. There has long been a fringe on the far right that believes the Clintons are responsible for murdering dozens of people in order to silence them. Sometimes, people who thought that way were in the mainstream, as evidenced by the leading role played by the Wall Street Journal editorial page in pushing the theory that Hillary Clinton had former White House attorney Vince Foster murdered.

But those people have been largely scorned and relegated to obscurity. The new conspiracy theorists — the ones who casually suggest that when a plane crashes, it is really a secret attempt by Putin and Trump to silence one of the passengers (who wasn’t even a passenger) — are found not on far right websites, but on MSNBC and at Harvard Law School, with constantly growing social media followings and increasingly viral tweets. The people who like to rail most about the dangers of “fake news” and conspiracy theorizing seem awfully uninterested in condemning them because their derangement is for the right cause.