Civilian Casualties Soared in Iraq and Syria in 2017. Was Trump’s Bloodthirsty Rhetoric to Blame?

A skyrocketing civilian death toll in the U.S.-led war against ISIS raises questions about how political changes may be influencing the conduct of the war. 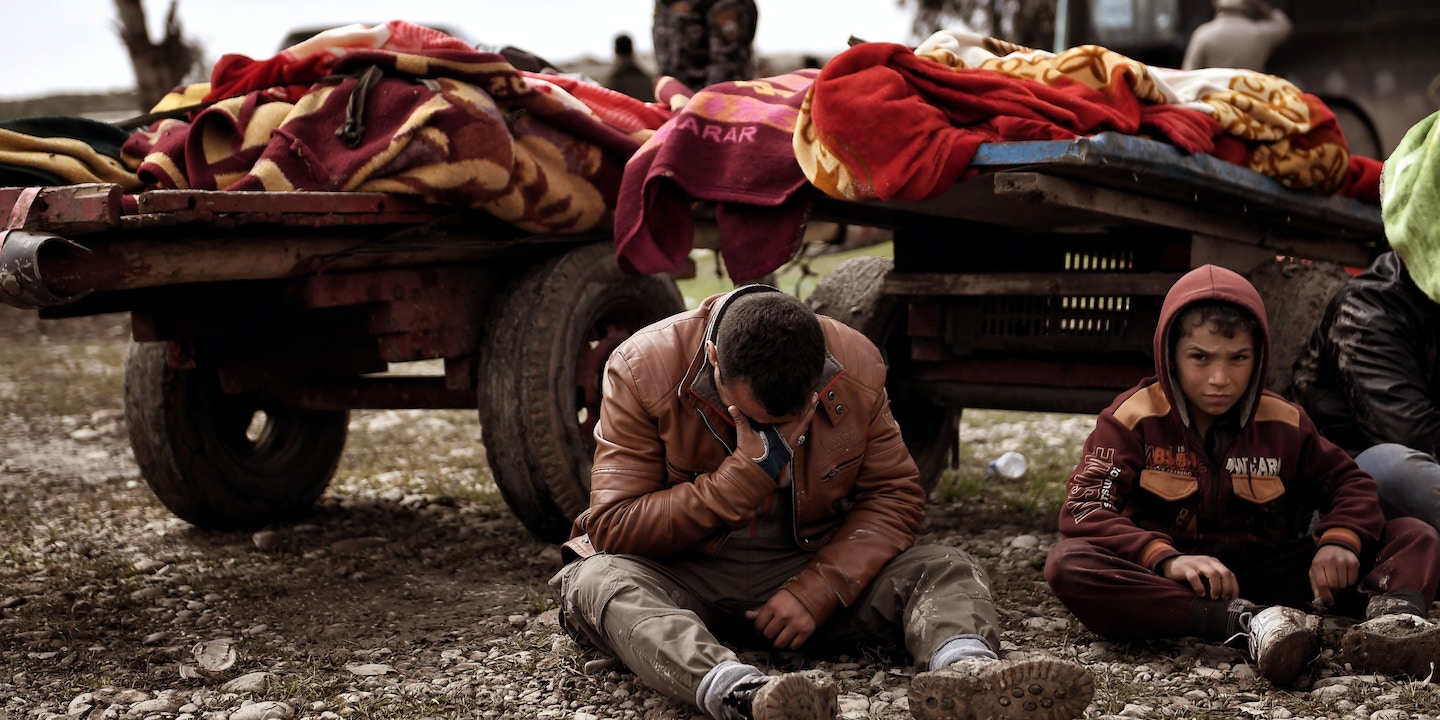 After three years of brutal fighting, the U.S.-led war against the Islamic State in Iraq and Syria is winding down, the U.S. military announced on Thursday, saying the coalition has “liberated” more than 98 percent of the area formerly controlled by ISIS, or Daesh, freeing “7.7 million Iraqis and Syrians once held under brutal Daesh rule.”

By all accounts, this victory has come at a huge cost to civilians, but how huge depends on who you ask. The U.S.-led coalition says it conducted 29,070 strikes between August 2014 and January 2018, killing “at least 841 civilians.”

But that figure is much lower than independent estimates, raising questions about the conduct of the war and its disproportionate impact on Iraqi and Syrian civilians. According to reporting by the nonpartisan monitoring group Airwars, between 6,136 and 9,315 civilians have died in coalition strikes since 2014, with death tolls spiking sharply in 2017. A recent New York Times investigation on airstrikes in Iraq also found drastic underreporting of civilian casualties in official statistics, with thousands of civilian casualties undocumented by official figures.

In its annual assessment issued last month, Airwars found that 2017 was the deadliest year for civilians in Iraq and Syria, with between 3,923 and 6,102 civilians killed in strikes conducted by the U.S.-led coalition. During 2017, civilian deaths from coalition air and artillery strikes in support of local ground forces in Iraq and Syria increased more than 200 percent over the previous year. Roughly 65 percent of all civilian deaths recorded by Airwars since the air campaign began in 2014 have occurred over the last 12 months.

“We expect that there are going to be civilian casualties in military operations — particularly during large-scale urban assaults — but we were not expecting casualties to increase at such a rate,” said Alex Hopkins, a researcher at Airwars. “We’re looking at extraordinarily high levels of civilian harm over the past year. It raises serious questions about level of care that the coalition is taking in its operations.”

The staggering increase in civilian casualty rates also raises questions about how political changes in the United States may be influencing the conduct of the war. In the run-up to the 2016 presidential election, then-candidate Donald Trump promised to take brutal and indiscriminate measures against territories under ISIS control in Iraq and Syria once in office, pledging to “bomb the shit out of them” and “take out [the] families” of suspected terrorists.

It’s doubtful that Trump has been closely involved in the military campaign, but he is the commander-in-chief of U.S. forces and his rhetoric seems to have influenced the Pentagon. In a significant departure from the public position of Obama-era military officials such as David Petraeus and Stanley McChrystal — commanders who generally emphasized the strategic value of judicious use of force and protecting civilians — Defense Secretary James Mattis has publicly called for the use of so-called annihilation tactics against militant groups.

And Mattis’s attitude seems to have trickled down through the ranks. On January 9, the Army’s highest-ranking enlisted officer, Command Sgt. Maj. John Wayne Troxell, stated that if ISIS fighters do not surrender, “we will kill them with extreme prejudice, whether that be through security force assistance, by dropping bombs on them, shooting them in the face, or beating them to death with our entrenching tools.” Months earlier, in the run-up to the coalition assault on Raqqa, then-coalition commander Lt. Gen. Stephen J. Townsend bragged that his forces “shoot every boat we find” in the Euphrates River running alongside the city. Townsend’s statement seemed to ignore the fact that the Euphrates River was then the main avenue of escape for civilians fleeing the city. Smoke plumes rise after an airstrike in west Mosul on March 10, 2017, as Iraqi forces advance in the city during the ongoing battle to seize it from the the Islamic State.

The correlation between the bloodthirsty public rhetoric and the skyrocketing civilian death tolls seems to suggest, at minimum, a more aggressive approach to the battle in the last year. While Mattis has indicated in public statements that decision-making on airstrikes has devolved to lower-level commanders, the Pentagon has also maintained that its formal rules of engagement governing the use of force in Iraq and Syria have not changed since Trump took office.

“While the coalition does not provide public details on our rules of engagement, we can tell you that our rules of engagement have not changed in the past year,” a spokesperson for U.S. Central Command told The Intercept in an email. “At this point in the operation, we are focused on dismantling their network, degrading their capabilities, exposing their extremist ideology for the senseless violence it represents, and preventing their resurgence.”

But experts say that even without a formal change, a shift in emphasis, resources, and expectations within the military may be leading commanders to take aggressive targeting decisions that will lead to more casualties.

“Just three or four years ago, there were phrases that senior commanders used indicating essentially that we cannot kill or capture our way out of this problem. That language has now disappeared, and under Mattis in particular, the language is strictly about killing the enemy,” says Micah Zenko, a national security expert at the international affairs think tank Chatham House. “As important as formal rules are the points of emphasis made by senior leaders. If the secretary of defense or [CENTCOM commander] Gen. [Joseph] Votel cared about this issue, they would devote more resources and attention to understanding and mitigating it. It indicates what the command sees as a priority.”

Zenko is also skeptical that the rise in civilian casualties can be wholly attributed to increased fighting in the urban areas of Raqqa and Mosul. “The ability to model targets and blast radiuses on munitions is now so advanced, it almost doesn’t matter where battles take place,” he says.

In one notorious incident during the battle for Mosul, U.S. forces used a 500-pound GBU-38 bomb to target a pair of ISIS snipers. That airstrike set off a chain of secondary explosions that killed over 100 civilians in the area, something that might have been avoided had a smaller munition been used for the strike. Zenko says that in that case, “It didn’t necessarily matter that the strike took place in an urban setting — it was the munition that was employed that raised the risk to civilians. These are choices about weaponeering that are not unique to urban settings.”

In recent weeks, there has been a steady decline in the pace of U.S. air operations in Iraq and Syria, as the three-year campaign to defeat the Islamic State draws to a close. But the loss of life and destruction of infrastructure in Iraq and Syria will leave lasting scars.

“War is never clean. You will always have civilian deaths and the destruction of infrastructure, but the question is, how do you try to minimize that?” says Sahr Muhammadally, director of the Middle East and South Asia program at the Center for Civilians in Conflict. “This was an intense campaign and the price that civilians paid in places like Mosul was just horrific.”

Top photo: Relatives mourn as the bodies of Iraqi residents of west Mosul killed in an airstrike targeting the Islamic State are placed on carts on March 17, 2017.