Entire Families Are Being Killed by U.S. Airstrikes in Raqqa, Syria On June 6, the U.S.-backed Syrian Democratic Forces announced the beginning of a military campaign to liberate the northern Syrian city of Raqqa from the Islamic State. In an interview at the time, the commander of the force, which is known as SDF, highlighted the critical role that the U.S.-led anti-ISIS coalition would play in the fight to take back the city. “The coalition has a big role in the success of the operations,” the commander said. “In addition to warplanes, there are coalition forces working side by side with the SDF.”

Nearly three months later, the battle for Raqqa is still raging, and more and more civilians are dying from U.S. airstrikes. A relatively small number of ISIS militants are fighting to the death to defend their putative capital, while an estimated 160,000 civilians are trapped in dire circumstances, caught between the armed factions on the ground and bombarded by U.S. airstrikes and artillery barrages.

Activists inside Raqqa who spoke to The Intercept by phone earlier this month described an increasingly desperate situation. (Their names are being withheld for their safety.) Despite the bombardment Syrian activist groups like Sound and Picture are continuing to work documenting abuses in the ISIS-held city.

“The airplanes are heavily striking the city, and many of the places they are targeting are empty of ISIS fighters and full of civilians,” an anti-ISIS Syrian activist from Raqqa told The Intercept. “The number of civilians being killed today is much more than the ISIS members.

“It’s a miracle to find any open grocery shop, the shelling is very intensive, and the ISIS snipers are very professional and target anyone they see outside,” the activist said. “The medical situation is even worse — people need medicine but many supplies were moved out of Raqqa earlier by ISIS, and the hospitals are forced to offer medical services only to ISIS fighters.”

A second activist described the death of his father in a strike in June: “The planes hit the street where he was walking to go home. There were no ISIS members or headquarters in that street, my father was only 50 meters from home. I wished that he had hurried home that night, but he was too old and it took him time.”

Many similar stories are told in a report released last week by Amnesty International. The report, titled “I Won’t Forget This Carnage,” documents in detail the growing civilian death toll from airstrikes and shelling in and around the city. The monitoring group AirWars estimates that between 725 to 993 civilians have been killed by coalition attacks since the assault on Raqqa began this June, with deadly incidents occurring daily.

As the battle moves into the heart of the city, coalition airstrikes and artillery fire — often called in by SDF fighters on the ground — have been blamed for attacks that have resulted in civilian deaths. The threat to civilians is compounded by the fact that ISIS is known to hide out in civilian areas, effectively using local populations as human shields. The transition to urban combat was expected to lead to an increase in civilian deaths, but the reported use of munitions with a wide impact radius and inadequate U.S. reporting on its own strikes has led to allegations of reckless disregard for civilian lives.

“We have seen incidents in which entire families have been wiped out. The scale of things is increasing significantly,” said Alex Hopkins, a researcher at AirWars. There has been a “worrying increase in the rate of mass casualty incidents” in recent weeks, he said, with disproportionate numbers of children being reported killed in U.S. strikes. 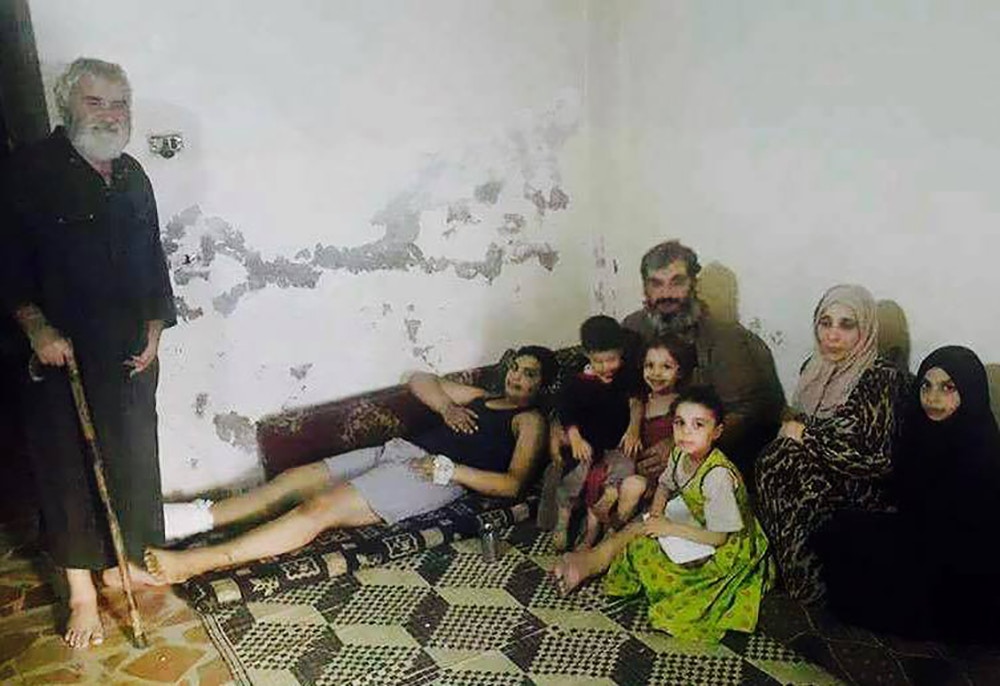 A photo of the Al-Aliwi family who were reportedly killed during an airstrike in Raqqa, Syria, according to AirWars.

For instance, a coalition airstrike in Raqqa City on August 14 killed a mother, Nahla Hamoud Al-Aran al-Shehab, and her three children, Marwa, Ahmed, and Mariam. Three days later, another strike killed 30 members of the al-Sayer family, including several children. On August 21, yet another attack killed eight members of the Al-Aliwi family, internally displaced refugees who had previously fled from fighting in their home city of Palmyra.

Amnesty International researchers also visited a farmhouse in the Hukumya-Salhiya area northwest of Raqqa, where 14 people were reportedly killed in a coalition attack before the campaign to take the city officially began. Amnesty found fragments of GPS-guided American munitions, and judged that “from the pattern of destruction there seems little doubt that the house was destroyed by air strikes.”

One of the survivors of that attack, named in the report as “Marwan,” said that his family had been killed while trying to hide in safety outside the city.

My sisters, my mother, my nephews, and nieces were bombed to shreds for no reason at all. Four strikes were launched against a house full of women and children, why? Only one of my brothers was with them. My sister’s husband had stayed in Raqqa to try to protect their homes. They knew that if they left their homes empty, Daesh would occupy them. The battle for Raqqa had not yet started but they got the women and children out for fear that the city would be besieged and they would get stuck there. That is why they were staying at the farm, to be safe, but death came to them in the more horrible way. Don’t they keep watch over their targets before they bomb? If they had they would have known that there were only women and children there.

Another member of the family, who saw the attack hit the farmhouse from a distance, described being unable to help his family as they came under assault. “The planes were circling all night, and we could not even approach the house to get the two injured children out from under the rubble until the following day,” he said. “The bodies were in shreds. We recovered body parts hundreds of meters away.”

Amnesty was unable to confirm whether ISIS fighters had been in or around the targeted area during the time of the airstrikes. In comments to the Associated Press responding to the Amnesty report, a coalition spokesperson said that the research on civilian deaths was based on “scant evidence,” suggesting that its findings served the interest of militant groups.

But the U.S. military does not provide detailed information about the timing and coordinates of attacks it carries out in Iraq and Syria, making it hard to judge the proportionality of strikes. And while the military claims to thoroughly investigate alleged civilian casualty incidents, it rarely interviews survivors of such attacks or conducts on-site investigations. “Relying on this limited methodology leads the coalition to discount a majority of reports as ‘non-credible’ or inconclusive,” the Amnesty report says. It calls on military officials to do more to be transparent about their lethal operations.

“We are not naive and are not pursuing some kind of utopian vision of a zero-casualty war in the middle of an urban area. However desirable that would be, we recognize that its not going to happen,” Donatella Rovera, senior crisis response adviser at Amnesty and one of the authors of the report, told The Intercept. “But there is a difference between civilian casualties occurring when every measure is being taken to avoid them, and civilian casualties occurring as a result of reckless or disproportionate attacks.”

Civilians have few escape routes from Raqqa, but some try to make it out via boat, across the Euphrates River. The U.S. military has dropped leaflets over the city warning civilians not to try to cross the river. In comments to the New York Times in July, Lt. Gen. Stephen J. Townsend, the U.S. commander of the coalition force leading the Raqqa operation, said, “we shoot every boat we find.”

Rovera said that Townsend’s comments reflect a serious lack of awareness of conditions in the city, where land escape routes are often blocked by ISIS fighters. They also signal a troubling degree of callousness about targeting practices.

“It’s unclear whether Townsend doesn’t know that the river is a main escape route for civilians, or whether he does know that and is still boasting about bombing every boat, but in either case it is unacceptable and suggests that reckless and indiscriminate attacks are being carried out,” Rovera said. “The [military] doesn’t interview people who have fled or whose families have been killed in these attacks, but if they did, they might learn something about how these attacks are actually impacting the people of this city.”

Criticism over civilian deaths from these airstrikes is rising. U.S. strikes have killed an estimated 2,200 civilians since President Donald Trump took office, almost matching the total number of deaths during Barack Obama’s administration. While the rising casualty figures could be interpreted as delivering on Trump’s repeated promises to wage the wars in Iraq and Syria more brutally and with less discretion, the military has defended its recent operations as proportionate.

On a trip to Baghdad last week, Secretary of Defense James Mattis responded to a question about civilian deaths in Raqqa by saying, “We’re not the perfect guys. We can make a mistake, and in this kind of warfare, tragedy will happen.

“But we are the good guys,” Mattis said. “And the innocent people on the battlefield know the difference.”