In the Idlib province in Syria, refugees are living in uneasy peace, but they fear being caught in an assault by the Assad regime on the Islamist stronghold. 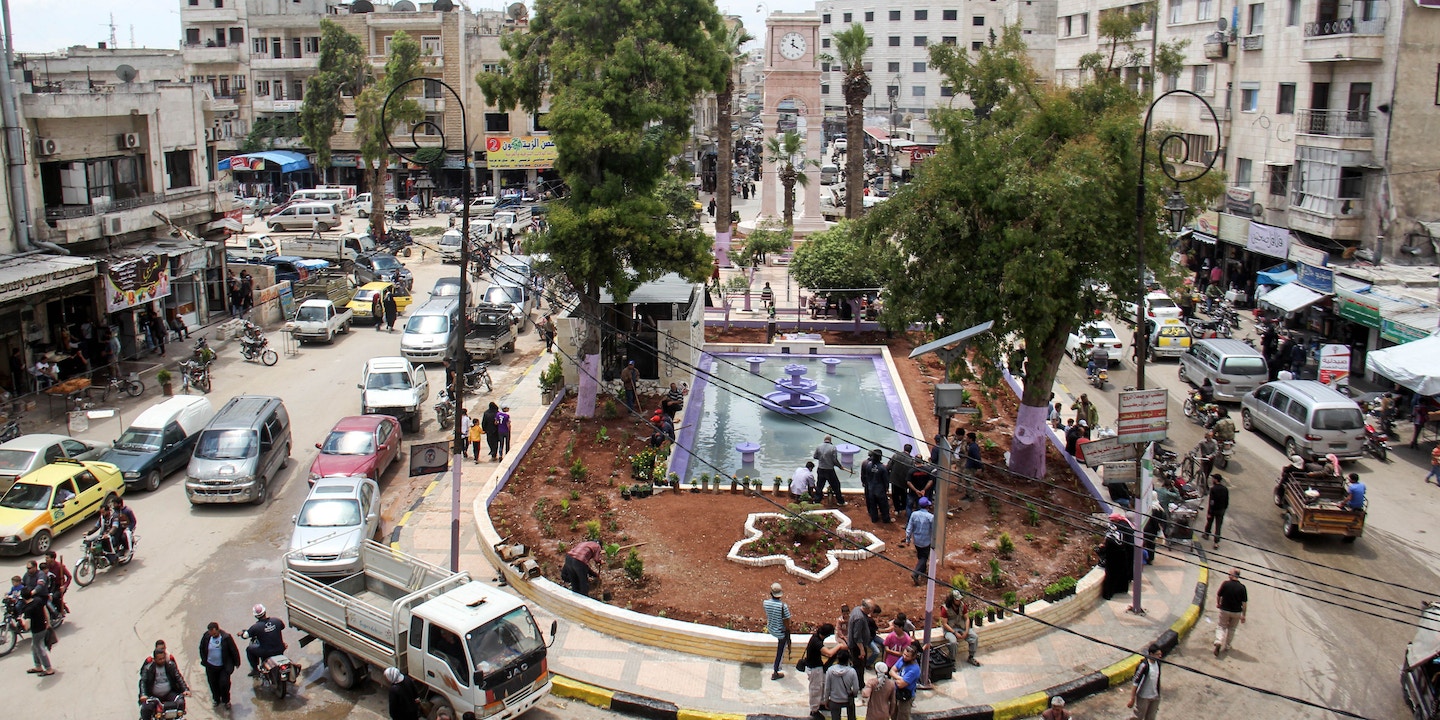 Six years after revolt first broke out in cities and villages across Syria, the regime of President Bashar al-Assad has rolled back the fractious opposition to its rule and regained control of almost every major population center in the country — except one, the northwestern province of Idlib.

Once famous for its olive groves and archaeological ruins, Idlib is now the last redoubt of Islamist opposition to Assad. The capital, Idlib City, has been under Islamist control since 2015, and today the two million people living in the province — many of them refugees from other parts of the country – could be caught up in a disastrous final confrontation between jihadists and the Assad regime.

Ahmad Awad, a civil society activist, was deported to Idlib by the Syrian regime as part of a brokered agreement earlier this year, when government forces retook his rebel-held hometown of Madaya. Awad, who became an activist during the revolution, had survived a years-long starvation siege and initially, he told The Intercept, “comparing to the circumstances I went through in Madaya, I was very happy when I reached Idlib.

“But then I started to change my mind. It’s a crazy place here, it’s a mess, everybody is on his own, while we have tens of thousands of displaced families living in camps, and nobody is taking care of them,” Awad said in an interview last week in the home he rents in Idlib City. “There is no real government here at all. All that people are thinking about is trying to make a living and their fears about what may come in the future.”

The main group currently in control of Idlib is the Al Qaeda-affiliated militant group, Hayat Tahrir al-Sham (HTS), formerly the Nusra Front. Under HTS, Idlib has also become a haven for international jihadists who have migrated to Syria, transforming parts of the provincial territory into a strangely multicultural world of Uzbeks, Chechens, Europeans, and others. An undercover report filmed by Syrian activists in Idlib and published by the UAE-based news network, Al Aan TV, earlier this year showed the province to be largely under the political control of HTS and affiliated groups, which have successfully put down other factions’ attempts to dislodge them. In Idlib City, the jihadists have imposed the hijab dress code on women and have even tried to ban young men from getting “Western” haircuts. A man holds up a pre-Ba’ath Syrian flag as dozens of people take part in a small gathering calling for the fall of the regime in Idlib, Syria on Dec. 30, 2016.

Despite the suffocating pressure of jihadist rule, civil society has found a way to survive in Idlib. The 2011 revolution pushed countless ordinary Syrians to become protesters, activists, educators, and journalists, and many continue to keep the revolution’s democratic aspirations alive. Activists who started out advocating for a civil state and demonstrating against the abuses of the Assad regime now also protest HTS rule. Jihadist efforts to achieve total social control have not been entirely successful. Acts of personal rebellion in violation of jihadist bans, such as smoking cigarettes, are widespread, and women continue to wear makeup in public with their hijabs.

Nonetheless, the prospects offered by life in Idlib remain dire, with unemployment, petty crime, and psychological trauma prevalent among the population. A negotiated “deescalation” with the Syrian government and its allies has prevented a major external assault on the province, but this cold peace is unlikely to last forever.

Eventually, Idlib will likely face a full-blown military attack by the Assad government and its Russian, Iranian, and Lebanese allies. In a panel discussion in Washington, D.C. last month, the U.S. special envoy for the coalition against the Islamic State described Idlib as “the largest Al Qaeda safe haven since 9/11,” signaling that the international community is also unlikely to tolerate a province under HTS’s control. The rest of the world will likely accept a military operation against the province as a necessary measure to take back territory from a powerful Al Qaeda affiliate.

“[HTS] is the dominant armed faction in Idlib today and everyone else, whether armed or not, is obliged to orient themselves relative to this one hegemonic actor,” said Sam Heller, an expert on the Syrian conflict at the progressive think tank, The Century Foundation. “I certainly am not an advocate of Idlib being burned down, but I think that it is difficult to imagine how else this is going to end.”

In an Arabic-language public letter posted this month, the top State Department official in charge of Syria, Michael Ratney, told Idlib residents to do as much as possible to distance themselves from HTS. Warning of “grave consequences” if HTS remained in effective control of Idlib, Ratney said that “it would be difficult for the United States to convince the international parties not to [take] necessary military measures,” if the group is not forced to relinquish power.

When the battle for Idlib does come, it may be the biggest humanitarian catastrophe in a civil war that has already claimed over 400,000 lives.

“The situation is really a disaster because there are a lot of people in Idlib who have no connection to Al Qaeda — including some rebel factions, many civilian residents, and nearly a million [internally displaced people],” said Heller.

Some of the most vulnerable people in the province are the many Syrian political activists who were deported or fled to Idlib in the wake of government offensives elsewhere in the country. “Many people who were unwilling or unable to reconcile themselves to life under the regime have been sort of funneled into Idlib,” Heller added. “There there are a lot of people — good people — who are going to be trapped in the crossfire when this attack happens.”

Housam Mahmoud, another Syrian activist in Idlib who was deported from Madaya, told The Intercept last week that the situation has become increasingly difficult of late, as HTS battled other rebel groups to cement its place as the main armed force in the province.

“When I was first sent here I expected that Idlib would be something like Afghanistan, but it turned out not to be the dark place I was expecting,” Mahmoud said. “But now, after the recent infighting by HTS, the situation is very frightening. The people are afraid of ending up as another Mosul,” he said, referring to the Iraqi city where Kurdish officials estimated that 40,000 civilians died during a U.S.-backed Iraqi government assault on ISIS.

Idlib province lies along the border with Turkey, which offers the possibility of refuge. But Turkey has already taken in roughly three million Syrians over the past several years; increasingly consumed by its own domestic instability, the country has become a much less welcoming place for Syrians in recent months. Growing public exhaustion with refugees has fed xenophobia, and fears of jihadist infiltration have led the government to tighten border crossings.

Regardless, some Syrians The Intercept spoke with in Idlib said that they will try to smuggle themselves across.

“Idlib is a dangerous place to live in. People are afraid of an attack from outside and afraid of getting caught in the fighting [between jihadists],” said Shafeek Omar, an elderly man who fled to Idlib from his home city of Deir ez-Zor. “Crime is spreading and we have a very high unemployment rate. It’s hard to make living in this country, and that’s why I am leaving to Turkey soon.

“I’ll cross the borders illegally through the mountains,” Omar said. “May God help me, I am 60 years old.”

Top photo: Syrians prepare for the holy month of Ramadan in a square in Idlib, Syria, on May 24, 2017.