The Story Behind the California Democratic Party Convention’s Floor Fracas

Fissures between the Democratic Party’s ideological wings emerged after progressives challenged the endorsement of Dave Min. 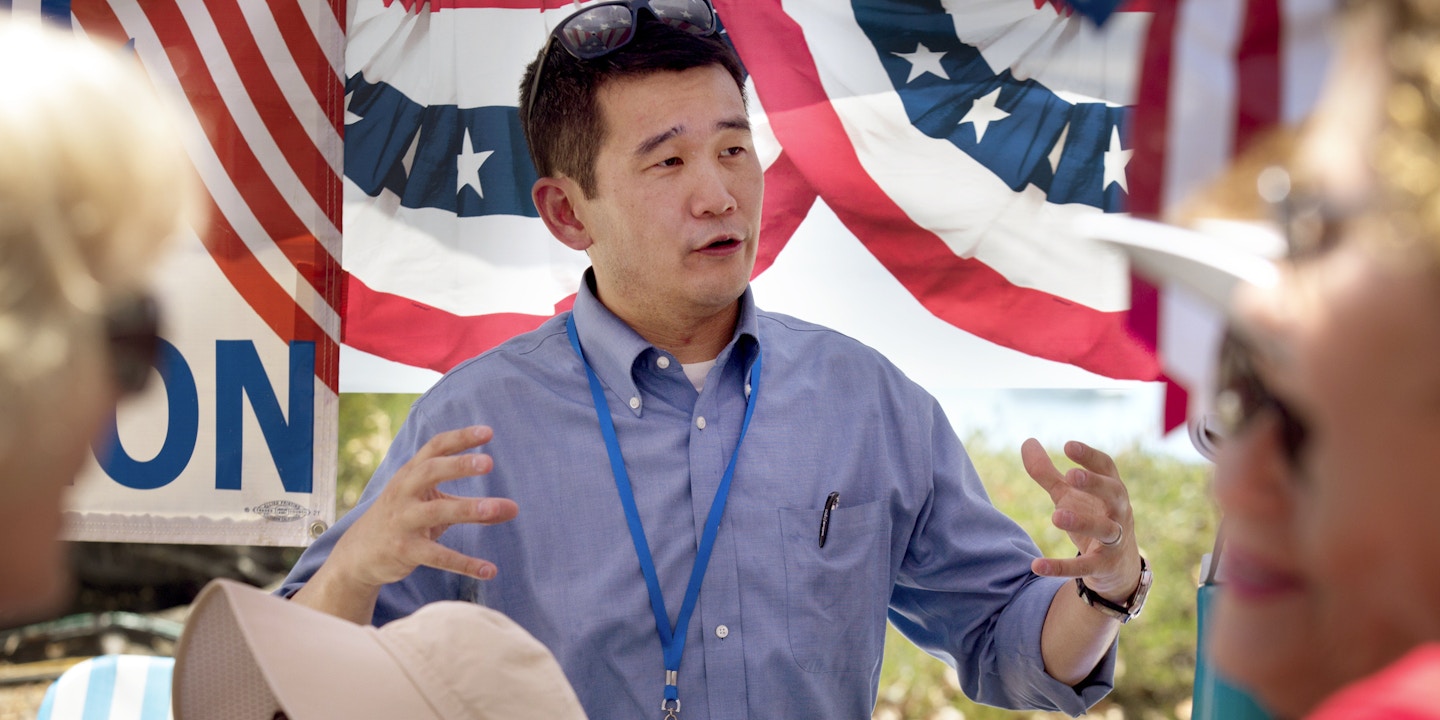 A ruckus broke out on the floor of the California Democratic Party Convention on Sunday following a contested endorsement for a congressional seat in Orange County, California, that Democrats hope to flip, leading to recriminations across the state between the competing ideological wings of the party.

Dave Min, a former legislative staffer to Chuck Schumer and economic policy director at the Center for American Progress who now teaches at the University of California, Irvine, won the state party endorsement for California 45th Congressional District over three challengers. Democrats looking to unseat Republican incumbent Mimi Walters have targeted the district, which Hillary Clinton won in 2016, as critical to their efforts to win back the House.

Under state party rules, candidates who get more than 60 percent of the vote of delegates in the district at the endorsing caucus win the endorsement, which entitles them to a spot on party slate mailers and, potentially, fundraising support. Indeed, the state party endorsement can make a decided difference in races for House seats with low-turnout primaries. A 2012 study from UC San Diego found that the party endorsement in downballot campaigns increased the candidate’s vote total by about 10 percent.

Min got 30 of the 50 votes cast at the caucus — exactly 60 percent — but just barely. One delegate who supported a different candidate showed up five minutes late to the caucus; if he were on time, the endorsement wouldn’t have gone through.

Because of that narrow margin, Min’s challengers had a second option. If a candidate gets between 60 and 66 percent at the endorsing caucus, the rivals can gather 300 signatures to force a fight on the floor of the convention to pull the endorsement. UC Irvine professor and foreclosure fraud expert Katie Porter, former Sherrod Brown aide Kia Hamadanchy, and Obama administration science and technology official Brian Forde decided to do so.

The signature-gathering process, done late at night while delegates partied in hospitality suites at the San Diego Convention Center, was marred by accusations of Min staffers interfering with their opponents. An Asian Pacific Islander caucus supporting Min told delegates not to sign petitions “to overturn the will of local delegates.” Hamadanchy claimed that his sister, collecting signatures on his behalf, was screamed at by Min and shoved by staffers. Videos of Min campaign staffers sprinting with signature gatherers appeared online; the Min campaign said they were merely trying to clear up “false information” being presented to delegates. Another video charged that Min was “intimidating” female Porter staff members. The video, which includes Porter’s field director, appears to begin after any alleged intimidation started, but Min can be seen telling staffers to “make sure she doesn’t get signatures.”

The videos don’t exactly confirm intimidation, and the highly charged environment and tight deadlines of petition gathering can lead to misunderstandings. Sources inside the Min campaign even report that their volunteers were being harassed, and that opposing volunteers tried to capture their people in moments that might make them look bad. “Volunteers were there to make their case for the petition to be presented to delegates accurately,” said Min campaign manager Paige Hutchinson. “The paid staff of our opponents were deliberately stirring up controversy.” Hutchinson cited several petitions that were thrown out because they did not include proper information.

Whatever happened, it didn’t stop the successful signature gathering, and the fight moved to the floor of the convention. Supporters and opponents of Min each offered up three speakers for one minute to state their case, and here fissures between the ideological wings of the party emerged.

“It’s not just about electing any Democrat, it’s about electing a Democrat who will act like a Democrat,” said Porter in her speech. “My opponent in this race is endorsed by the New Democrat coalition, the former Blue Dog caucus.” Indeed, the New Dem PAC has put Min on its “candidate watch list.” Porter has been endorsed by Democracy for America, the Progressive Change Campaign Committee, and Sens. Elizabeth Warren and Kamala Harris.

Opponents have also criticized Min for trying to have it both ways on single payer health care. Min consistently says he’s “fighting for universal health care,” which is not exactly the same thing. Rep. Mark Takano, D-Calif., was seen pulling delegates out of the convention hall during the endorsement caucus to make the case for Min. He said that while he had not endorsed in the race, running on more conservative ideas would have the best chance of success in the district.

“Dave is not the candidate who is furthest to the left,” said Paige Hutchinson, Min’s campaign manager. “Do we think that better represents the district? Yes. No Democrat has won here. It’s a conservative district that’s rapidly changing, but people here care a lot about their taxes, and single payer would be a tremendous tax increase.”

Rep. Ro Khanna, who represents California’s 17th District, rebutted that theory in an email released by the PCCC today. “Democrats don’t have to sacrifice progressive values to win this district,” Khanna wrote. “In fact, what we have seen over and over again is that Democratic performance improves when we give voters something inspiring to come out and vote for. Katie is the most reliable leader on progressive issues we care about.”

The DCCC, often criticized for blocking more progressive candidates, has identified California’s 45th District as a “majority maker” seat, but has not gotten involved in choosing sides in the race, according to Porter. “We’ve had the freedom on the ground to run our race and deliver our message,” she said in an interview.

Orange County Democratic Party Chair Fran Sdao and popular State Controller Betty Yee spoke on Min’s behalf; both stressed unity and listening to local leaders. Delegates from across the state, who had little information about one Orange County House race, then had to vote on whether to pull Min from the endorsement calendar. Historically those delegates are reluctant to get involved in a local matter. State Party Chair Eric Bauman called a voice vote and determined that Min won, keeping his name on the endorsement calendar. No roll call vote of the 3,000 delegates was taken. The California Democratic Party has endorsed prior to primary elections for some time, and with an earlier convention date, this year’s endorsements came before the deadline to formally get on the ballot, enabling candidates to drop out if their path to victory narrows.

Winnowing the large fields in House races was a theme of the party convention, with its leaders openly stating a desire to thin the ranks. That’s because of the state’s top-two primary, where the leading two vote-getters advance to the general election regardless of party. It could set up situations in swing races with lots of Democrats running where they cancel each other out, leading to two Republicans competing in November.

“We may be aced out of seats that are primed, set and ready for us,” Bauman said on the convention floor.

But in the two seats where this issue is most acute — the 39th and 49th districts where Republicans Ed Royce and Darrell Issa aren’t running for re-election — the party did not endorse anyone, lessening the chances of a narrowed field.

The nightmare two-Republican scenario is not necessarily a problem in the 45th District, where it’s overwhelmingly likely one Democrat joins Mimi Walters in the November election. A poll released by the PCCC over the weekend showed Walters at 42 percent in the primary, with Porter at 16 percent and Min at 12 percent. Another 10 percent went to the other two candidates, with 21 percent undecided. In head-to-head matchups, Porter was ahead of Walters 46-44; Min led Walters 45-44.

Porter’s fortunes could change with Min’s Democratic endorsement. And it does make some wonder why the party gets involved so early to pick winners and losers, rather than leaving it to the voters. “I don’t understand the state party endorsement from the outside,” said Warren in an interview. “I asked (Sen. Harris) about it and she did this giant eyeball roll.”

To some it seems odd that 30 delegates can make a decision worth potentially hundreds of thousands of dollars to the endorsed candidate. To others it’s a signal of grassroots support and organizing and ought to be rewarded. These debates have gone back and forth within the state party for decades, and mirror the fight at the national level over superdelegates in presidential nominations.

“I’m grateful to be the Democratic Party’s endorsed candidate against Representative Mimi Walters, and humbled by the incredible grassroots support that propelled us to this victory,” said Min in a statement.  “Democrats are uniting to defeat Walters and stop the Trump agenda.”