Mohammed bin Salman, the crown prince of Saudi Arabia, met with Theresa May on Thursday at the prime minister’s official government estate outside London. MBS, as he’s known, is the son of the current Saudi king and widely seen as both the power behind the Saudi throne and its heir apparent.

There’s been significant public outcry, during MBS’s three-day visit to the U.K., over Saudi Arabia’s war on Yemen, which has been strongly supported by both the U.K. and the U.S. Jeremy Corbyn, leader of the Labor Party, has said the British government is “colluding” in war crimes in Yemen.

What’s gone totally unremembered, however, is that Thursday was the 33rd anniversary of a notoriously grisly assault carried out by Saudi Arabia, the U.K., and the U.S. On March 8, 1985, a car bombing in Beirut aimed at assassinating Shia cleric Mohammad Hussein Fadlallah missed its target, but killed 83 other people. 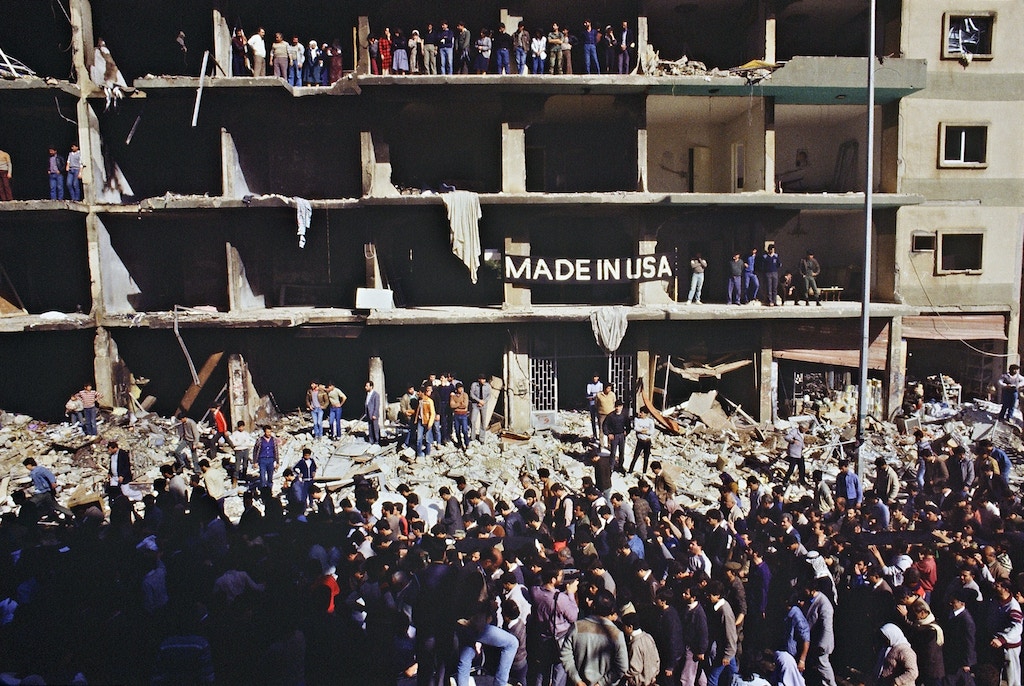 Rescuers work outside and inside the worst-hit building 15 minutes after a car, packed with an estimated 250 kilograms (550 pounds) of TNT exploded in a crowded street of the southern Bir al-Abed district in Shiite southern suburb of west Beirut on March 8, 1985.

The complete evaporation of this history is particularly notable given that the bombing victims were mostly women and girls, and the meeting between MBS and May fell on International Women’s Day. Moreover, Fadlallah was well-known for promulgating relatively liberal views on the place of women in Islam. In 2007, on the International Day for the Elimination of Violence Against Women, Fadlallah decried all forms of violence against women – physical, psychological, educational (i.e., not allowing women to pursue whatever level of education they want, “reaching to post-graduate levels”), and “not giving women equal pay for equal work.”

The Western media often called Fadlallah the “spiritual mentor” of Hezbollah, the militant Shia political party founded after Israel’s invasion of Lebanon in 1982, although this was not really correct. Rather, Fadlallah was one of the region’s most popular Shia leaders and an inspiration to many Shia, including prominent members of Hezbollah.

In any case, according to the 1987 book “Veil” by Bob Woodward, the Reagan administration came to believe that Fadlallah was behind three attacks against U.S. targets in the Lebanese capital of Beirut that killed 329 people in total: the bombing of the U.S. embassy and a Marine Corps barracks in 1983, and the bombing of the U.S. embassy annex in 1984.

This was likely not correct. Robert Baer, a former CIA operative stationed in Beirut at the time, later said, “I can guarantee you, and I have seen every bit of intelligence, that Fadlallah had no connection. … He knew the people carrying out the terrorism acts, but he had no connection in ordering them.”

Officially the U.S. was engaged in “peacekeeping” at the time of the attacks, with American troops there to supervise the evacuation of the Palestinian Liberation Organization. The Reagan administration therefore saw the bombings as illegitimate terrorism.

In the eyes of many Lebanese, however, the U.S. was intervening on the side of Israel and itself engaging in a brutal attack on Lebanon. Even former Secretary of State Colin Powell understood this perspective, writing in his autobiography, “My American Journey” that:

[National Security Adviser Bud] McFarlane, now in Beirut, persuaded [President Ronald Reagan] to have the battleship U.S.S. New Jersey start hurling 16-inch shells into the mountains above Beirut, in World War II style, as if we were softening up the beaches on some Pacific atoll prior to an invasion. What we tend to overlook in such situations is that other people will react much as we would. When the shells started falling on the Shiites, they assumed the American “referee” had taken sides against them. And since they could not reach the battleship, they found a more vulnerable target, the exposed Marines at the airport.

A faction of the Reagan administration, led by CIA Director William Casey, wanted Fadlallah dead, but there were legal obstacles. In particular, a 1981 executive order forbade anyone acting on behalf of the U.S. from engaging in assassination. So, according to “Veil,” Casey arranged an off-the-books plan with Prince Bandar, then the Saudi ambassador to the U.S. The Saudis would pay the $3 million cost of the operation and engage the subcontractors who would actually carry it out.

According to other reporting, the British government was also deeply involved in planning the hit. It was supervised by a former member of the British special forces, who organized different compartments of local agents to buy the explosives and the car, and trail Fadlallah. A CIA operative later explained about the British government generally at the time that “they had a willingness to do jobs I couldn’t touch. They basically took care of the ‘How to kill people department.’”

The car bomb was parked 50 meters from Fadlallah’s apartment building and set off as services at a nearby mosque were letting out. The explosion left a crater 5 yards wide and 3 yards deep; hospitals in the area were overwhelmed by the 200 wounded, and the Lebanese government appealed for blood donations. But Fadlallah had been nowhere nearby and survived unhurt.

All in all, it’s a remarkable story suggesting that the foreign policy of Saudi Arabia, the U.K., and the U.S. is not that different from large-scale organized crime. But of course, that’s exactly why we’ve apparently decided to forget about it completely, even on a day when it should have been the most natural thing to remember.