The Art of the Wall

Donald Trump and Swiss artist Christoph Büchel have each exploited the idea that a border wall is somehow novel. In fact, frontier barriers — and artistic commentary on them — have a long, fascinating history. 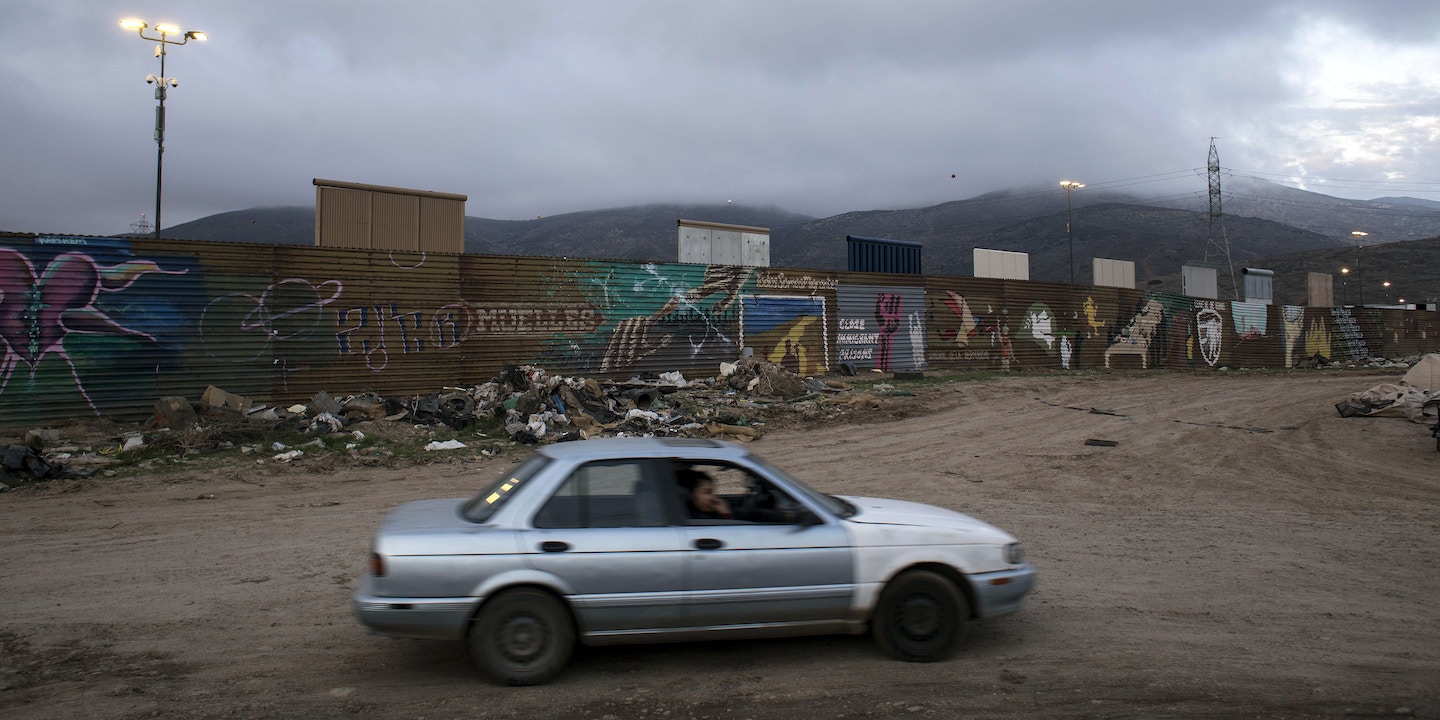 Donald Trump’s visit to San Diego today to tour border wall prototypes will be political theater, allowing a president who loves props to wave at some very big ones. The wall is Trump’s signature issue, and it’s easy to envision him thoroughly enjoying a walk through the eight giant, concrete-and-steel test sections placed for his perusal.

There’s been a smaller storm brewing around another tour of the prototypes, staged by the Swiss artist Christoph Büchel. In December, Büchel began a project to have the wall sections designated a national monument, declaring that they “have significant cultural value and are historical land art.” He launched a petition to preserve the prototypes under the American Antiquities Act on both historical and aesthetic grounds, citing as precedents Stonehenge and the mass-produced “readymades” of Marcel Duchamp. “This is a collective sculpture; people elected this artist,” Büchel told the New York Times. In the meantime, he has been organizing $25-a-head excursions to the site.

As many pointed out when Büchel launched, there were a number of reasons why his performance felt like a lame provocation from a man with no connections to or context for the region. The Los Angeles Times went on one of his tours and noted that the European guide and curator accompanying them had never before been to Tijuana, directly across the border from the prototypes. Hundreds of artists condemned the project in an open letter as “concerned more with spectacle and irony than critically dismantling oppressive structures that undermine the lives of the most vulnerable” and called for a boycott of Hauser & Wirth, a prestigious international art gallery that has promoted Büchel’s piece. The backlash, of course, ensured attention — the same symbiosis of outrage and buzz that greeted the artist’s 2015 installation of a mosque inside a church in Venice (authorities shut it down, claiming it was a security threat and that Büchel hadn’t gotten the correct permits.)

But the big gesture of Büchel’s work, invoking a dated argument about whether anything can be art (yes, probably), doesn’t engage with the reality of the border or the history of U.S. immigration enforcement any more than Trump’s photo-op. Preserving the prototypes as monuments would freeze-frame only a particularly absurd and bald-faced moment in a continuum of xenophobic construction.

Büchel’s work doesn’t engage with the reality of the border any more than Trump’s photo-op.

The prototypes are indeed weird and aesthetically interesting; peering at them from Tijuana when they first went up, I also felt something of the “majesty of minimalist sculpture,” as the New York Times put it, and its fascist undertones, as New York Magazine said they called to mind. But then again, the existing border barrier is already evocative in its many manifestations. If you’re looking for symbolic weight, isn’t it bizarre that stretches of the wall are made from surplus helicopter landing pads from the Vietnam War? It’s plenty strange already to see where the railing snakes across the beach in Tijuana and disappears into the Pacific, or see metal grates stop and start in cotton fields and pecan orchards in south Texas. In the Santa Ana National Wildlife Refuge, Homeland Security has literally been bulldozing butterflies to clear the way for border fence construction.

Büchel seemed to underline the lack of context for his endeavor when he told the New York Times that the prototypes can, in some distant post-Trump future, “remind people there was the idea to have this border wall once.”

Setting aside that in Büchel’s native Europe, walls to keep out migrants are going up all over, the “idea to have this border wall” is, of course, not actually Trump’s. The helicopter pad sections went up in San Diego starting in 1989, and the Clinton administration funded further construction in the mid-90s, mostly in urban areas (beginning a policy, which continues, of pushing migrants out into harder-to-cross areas, where many thousands have perished.) Much of the existing border boundary, some 650 miles, was constructed after the passage of the Secure Fence Act of 2006, when members of Congress, including many Democrats, demanded new barriers – and gave the executive branch powers to waive environmental and other laws to do so.

As these various walls and fences have gone up, so has art. The prototypes were met immediately by impish local art projects, including projections from Tijuana of images of ladders and the message “LLEGALE!,” a play on “illegal” and the Spanish word for “come.” A “Surf Border” flaunted the ocean boundary in a protest piece. The artist JR has staged his iconic photographs using the San Diego fence as a foil, with a giant child peeking over one section, and a picnic staged across another, enormous eyes looking up from the binational table. These are only the latest in a long tradition of art about the border, from painting and graffiti down the rods of the fence at the Tijuana beach to staged soccer, basketball, and volleyball games. One pair of Mexican and American artists has surveyed the old obelisks that were installed in the 19th and 20th centuries to denote the border, while another team marked the pre-Mexican-American War boundary all the way to the coast of Oregon with new obelisks. (One of those artists also built a Trojan horse to straddle a border crossing.) Add to these and many other interventions a host of theoretical projects, anti-border imaginaries, and visualizations, and it becomes abundantly clear that, far from the readymade art Büchel claims to have discovered, “the wall” is already a living site of creation – already a monument to suffering and resistance to decades of enforcement of an arbitrary line.

“The wall” is already a living site of creation – already a monument to suffering and resistance.

Trump is obviously not popular in California, and his trip comes just after Attorney General Jeff Sessions announced that he’s suing the state over its sanctuary policies. Activist organizations in Tijuana and San Diego have organized days of protest against not just the symbolism of the wall, but also the more significant and impactful of Trump’s hard-line immigration policies.

Indeed, until this week, many local activists were wary of protesting around the prototypes – worried about inflating the importance of the barriers and drawing a disproportionate response from the authorities. From the Mexican side, you can get close enough to the construction site to chat with a worker or Border Patrol agent, turning a rough, dirt-track Tijuana neighborhood into a thoroughfare for journalists and other curious visitors. From the U.S. side, you can barely see the shapes of the test walls in the distance from an industrial cul-de-sac where local law enforcement join federal agencies in keeping tabs on sightseers.

Trump’s prototypes may go down in history not as art, but as yet another example of bloated security spending. The administration is pushing forward with a request for $18 billion over the next 10 years to fund more than 300 miles of new wall and reinforce 400 miles of existing fence. This would mean a structure of some kind across about half the U.S.-Mexico border, much of which is in floodplains and mountainous regions where even border security hawks don’t see construction as plausible or desirable. Customs and Border Protection also wants money for personnel, surveillance technology, and roads. Questions are already being raised about the first company awarded a contract to replace fence in Calexico, California – a small Nebraska startup, which the Associated Press reported last week is an offshoot of a company accused of failing to pay subcontractors and “shady billing practices.”

MAGA, or “Make Art Great Again,” Büchel’s nonprofit dedicated to the cause of memorializing the prototypes, ends its mission statement with an odd turn of phrase: “Instead of causing us to remember the past like the old monuments, the new monuments seem to cause us to forget the future.” This may be artist-statement word salad, but it seems about right — forget the past and the future. Trump’s fixation on “his” border wall and Büchel’s are much the same: egoistic spectacles that obscure the reality of what is already there.

Top photo: The prototypes of the wall US President Donald Trump wants to build on the border with Mexico are seen on the outskirts of San Diego, in the US, from Tijuana, in the Mexican state of Baja California on March 12, 2018.