Leo Varadkar stirred outraged by admitting that he once responded to a request from Donald Trump to help block a wind farm near his Irish golf course. 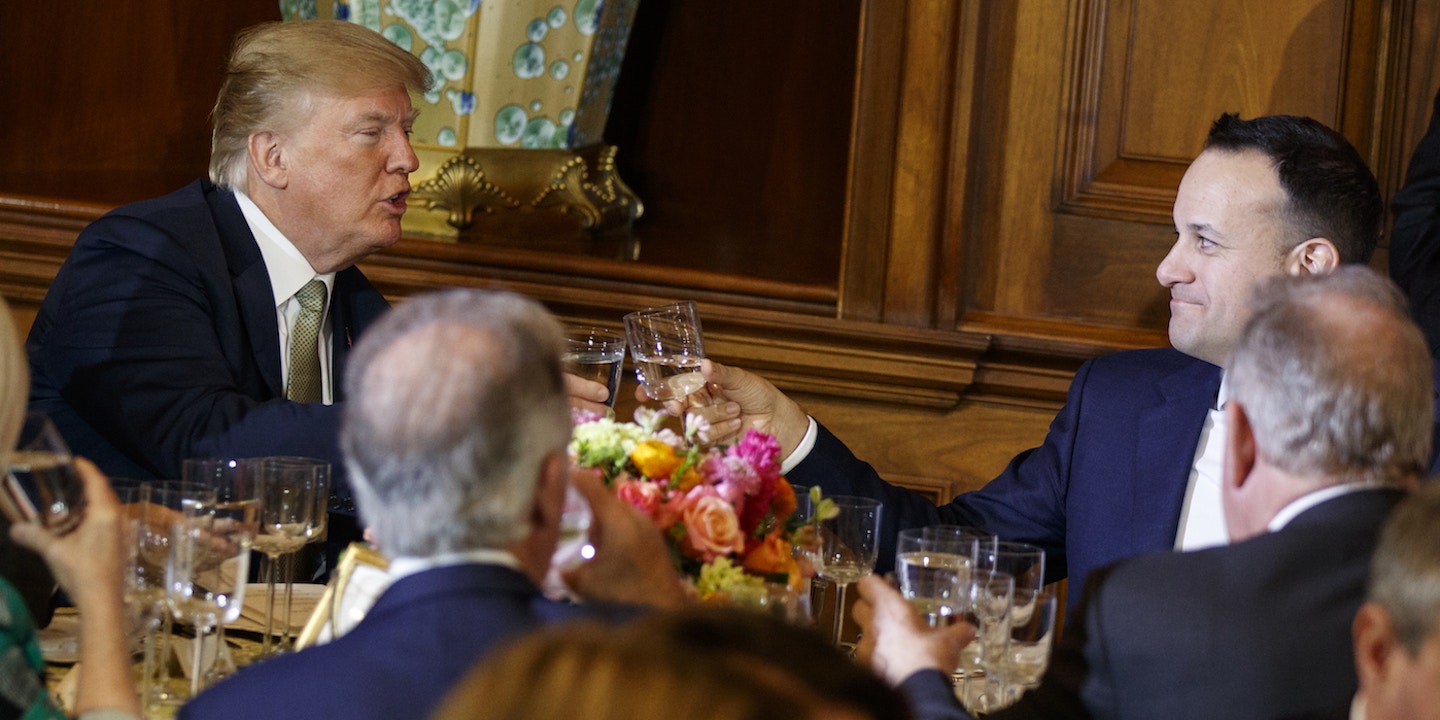 During his first St. Patrick’s Day visit to Washington, D.C., Ireland’s new leader, Leo Varadkar, stirred outrage back home by saying that he once responded to a request from U.S. President Donald Trump to help block the development of a wind farm near an Irish golf course owned by the American president.

The admission came during a speech Varadkar made at a luncheon at the Capitol on Thursday, in which he boasted that Trump credited him with convincing local officials to deny government approval for the offshore windmills in 2014, when the current premier, or taoiseach, was Ireland’s tourism minister.

Video of the remarks from Ireland’s state broadcaster, RTE, showed Varadkar sharing what he presented as a lighthearted anecdote about Trump’s no-nonsense nature, and his own surprise that the developer had called him personally to ask for help in having the wind farm blocked.

The Taoiseach explains how he got a surprise call from Donald Trump a few years ago pic.twitter.com/VBluzmdI2s

After determining that the call was not, as he first suspected, a prank, Varadkar said that he had tried to help Trump. “I endeavored to do what I could do about it. I rang the county council and inquired about the planning permission and subsequently, the planning permission was declined and the wind farm was never built,” he recalled.

“I do think it probably would have been refused anyway,” the taoiseach added, “but I am very happy to take credit for it if the president is going to offer it to me.”

The uproar in Ireland was widespread, not least because Varadkar had previously suggested that Trump was obviously racist and misogynist, and that he would be happy to tell him so to his face when they met. “I think any reasonable person would agree some of the comments he’s made are racist, particularly in relation to Latinos, and also many of the things he has said are sexist,” Varadkar told reporters during the 2016 U.S. presidential campaign.

What he said hed do>>>
Varadkar: Ill be giving that Trump fella a piece of my mind

Varadkar: I pulled a stroke for Donnie by ringing Clare County Council and Donnie loves me. Donnie is the greatest

Although a spokesperson for the Irish leader said his intervention on behalf of the foreign businessman had been merely “normal politics” and “entirely appropriate,” Irish journalists, voters, and members of other parties expressed scorn for that idea on social networks.

This is startling admission from Taoiseach... Varadkar says, that after receiving call from Trump, he contacted Clare County Council about a wind farm that Trump didn't want built near Doonbeg golf resort and that the planning permission was subsequently declined. https://t.co/0bzSiYTJrI

The Taoiseach should not be meddling in planning at Doonbeg or interfering with President Trump's private business interests. https://t.co/JZX5SRh6ho

V important that this story is NOT characterised as innocuous “gaff” by Varadkar. Wasn’t a silly slip of the tongue. This was Taoiseach openly stating that he sought to influence a local authority on planning matters on behalf of a billionaire businessman. It’s v serious stuff.

Instead of taking up Trump for sexism, racism & homophobia, Varadkar recalled how he as Minister was on speed dial for billionaires. As Minister he put pressure on local Council to not grant permission for development Trump didn't want! #doonbeg #StPatricksDay2018 #dubw

Who would have thought that at a meeting between Trump and Varadkar, Varadkar would prove the bigger embarrassment.

Some achievement to go meet Donald Trump and be the bigger fucking eejit.

The local government in Clare County, where Trump’s Doonbeg course is located on a strip of land along the Atlantic coast, said that it had no record of any intervention by Varadkar before permission for the wind farm was denied.

Statement from @ClareCoCo in response to queries received this evening pic.twitter.com/hK4vmcIv8S

However, it emerged that the Irish tourist board, a part of the tourism ministry known as Fáilte Ireland, had indeed argued against the wind farm when Varadkar was in charge of the department.

Failte Ireland, which operates under the aegis of the Department of Tourism, made a submission to An Bord Pleanála recommending refusal for the #Doonbeg wind farm pic.twitter.com/eTvM3yjlRN

Speaking to reporters in New York on Friday afternoon, Varadkar said that he had fumbled the details of his intervention on Trump’s behalf in telling his story, and stressed that the humorous aspect of tale was that Trump had given him credit for something he did not do. “I didn’t have a clear recollection of it at the time, but I have gone back now and checked with my staff and checked the records. I didn’t contact Clare County Council, either verbally or in writing,” the Irish leader said.

VIDEO: Leo Varadkar says any questions he pursued on behalf of Donald Trump in relation to Doonbeg were ‘entirely above board’ pic.twitter.com/3KDWdIQY0F

He admitted that he did, however, send an email to the chief executive of the Irish tourist board. The board, Varadkar said, “has a statutory remit to look at planning applications and to see if they could have a negative impact on tourism. They were aware of the development already and did make observations to the council.”

Late Friday, Varadkar’s office released the full text of his February 24, 2014 email to the chief executive of the Irish tourist board, in which he wrote that he did promise Trump that he would ask the board to review the application and recommend against the project if they agreed with his objections.

Breaking: Taoiseach @campaignforleo has released the email he sent to Fáilte Ireland after he received a call from @realDonaldTrump regarding Doonbeg. pic.twitter.com/F3rQIAL5Mr

As the Irish novelist Damien Owens observed, the entire ritual of Ireland sending its leader to Washington to present the American president with a bowl of shamrocks is now seen by many as an anachronistic, and somewhat humiliating, act of supplication — even if it might help to win visa concessions for Irish immigrants.

It's always embarrassing when a Taoiseach shows up at the White House with a fistful of shamrock and a DVD of The Quiet Man, but Varadkar has hit a new low. 'Hey, racist scumbag whom all decent people loathe, remember the time I greased the planning process for you?'

Although Varadkar did mention the plight of undocumented Irish immigrants in the U.S. to Trump, in the view of many Irish observers, his attempts to ingratiate himself with the man he had once denounced seemed over the top.

One curious feature of the debate over the wind power project that Trump asked Varadkar to help block is that it had also been strongly opposed by Friends of the Irish Environment, an environmental group that feared the disruption the windmills would bring to the sensitive Doonbeg river system and the freshwater pearl mussel.

That same group is now fighting to block a huge sea wall that Trump has been granted permission to build to protect his Irish golf course from coastal erosion brought on by climate change. Although the local government in Clare County recently decided to permit the building of the wall, environmental activists are now suing to block the project.

As Ireland’s first openly gay taoiseach, Varadkar had also promised to raise LGBT rights with Vice President Mike Pence, who has endorsed so-called conversion therapy to “cure” homosexuality. In a break from tradition, however, the vice president insisted that an annual breakfast in honor of St. Patrick at his residence be held behind closed doors, with no Irish or American media allowed in to witness or record it.

Photos have been released of the meeting between the Taoiseach @campaignforleo and @VP Mike Pence. The Taoiseach did not mention gay rights during his speech. We don’t yet know what the two men talked about during their private discussions. pic.twitter.com/MpsBAtm9MZ

Later on Friday, Irish officials told members of the press corps from Ireland that while Varadkar did not raise the issue in his speech at the breakfast, he had discussed LGBT rights with Pence and his wife Karen during a private discussion the previous day. Those unnamed officials also said that Pence told Varadkar that the taoiseach’s partner, Matthew Barrett, would be welcome in his home if he attended the same event next year.

Varadkar traveled to New York to march in the St. Patrick’s Day parade on Saturday alongside Barrett.

Taoiseach Leo Varadkar marching in the St Patrick's Day parade with his partner Matt alongside him pic.twitter.com/IRwNzLAYej

As the Irish Times correspondent Suzanne Lynch observed, the presence of an Irish premier who is both an openly gay man and the son of an Indian immigrant will challenge an “outdated stereotype of Irish identity.” Until two years ago, the conservative, Catholic organizers of the 250-year-old parade had barred Irish LGBT groups from taking part, leading to protests and ugly scenes of gay rights protesters being viciously heckled.

This post was updated to add the text of Leo Varadkar’s 2014 email to the Irish tourist board and video of protests at the St. Patrick’s Day parade in 1991 and 1992.