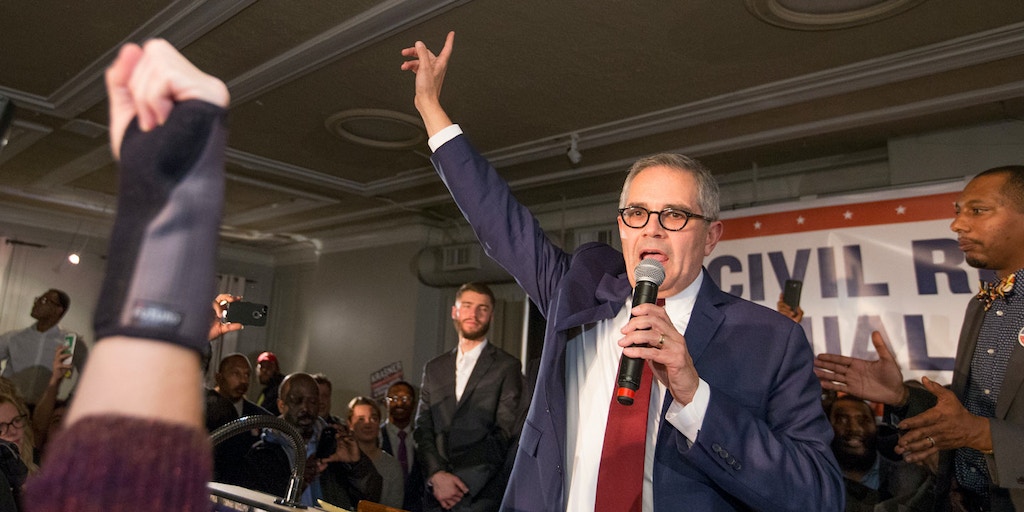 Democratic nominee Larry Krasner takes the stage after winning the election to be the next Philadelphia district attorney on Nov. 7, 2017.

When lifelong civil rights attorney Larry Krasner was elected in a landslide this past November to become the new district attorney of Philadelphia, to say that his fans and supporters had high hopes would be an understatement. Anything less than a complete revolution that tore down the bigoted and patently unfair systems of mass incarceration would be a severe disappointment.

Across the country, talking the talk of criminal justice reform has gotten many people elected as DA. Once in office, their reforms have often been painfully slow and disappointing. Krasner was the first candidate elected who publicly committed not just to intermittent changes, but a radical overhaul.

So far, having been in office less than three months, he has exceeded expectations. He’s doing something I’ve never quite seen before in present-day politics: Larry Krasner’s keeping his word — and it’s a sight to behold.

In his first week on the job, he fired 31 prosecutors from the DA’s office because they weren’t committed to the changes he intended to make. “Change is never easy, but DA Krasner was given a clear mandate from the voters for transformational change,” his spokesperson said at the time. “Today’s actions are necessary to achieve that agenda.”

Next, Krasner obeyed a court order to release a list of 29 officers from the Philadelphia Police Department that were on a “do-not-call list” — meaning that they were so tainted that they would be considered unreliable as witnesses. The police officers on the list had either been charged with crimes or found responsible for misconduct in internal police probes conducted by the department’s Board of Inquiry. Among the offenses, according to the Philadelphia Inquirer, the police officers had lied to their fellow investigators, filed false reports, used excessive force, driven drunk, and burgled.

After that, Krasner’s office made it clear that he would not oppose rapper Meek Mill’s release on bail. Krasner’s office said in a motion that it was likely Mill, who was arrested almost 10 years ago on drug and gun charges, would win an appeal on his original case. (Mill is in jail for minor probation violations.) The sole officer who testified against Mill is Reginald Graham, who is not just on the list of unreliable cops, but was reported by a former police officer to have lied under oath to put Mill behind bars.

All of that is big, but nothing is as essential and revolutionary as the internal five-page guiding document of new policies that Krasner sent to his staff. While the document appears to have been sent to the staff of the Philadelphia DA’s office on February 15, 2018, it only became public a week ago.

I study prosecutors for fun and for a living. I’m that type of guy. (Separately from my work at The Intercept, I help run the Real Justice PAC, which supports progressive candidates in DA races across the country. Real Justice endorsed Krasner before I joined, and the views expressed here are my own and not related to Real Justice’s work.)

I’ve never seen anything like this document. It’s a dream come true for those of us who’ve been fighting our hearts out for justice reform for years. Check out the document for yourself. I’ll amplify some of the highlights, but it’s best read in its entirety.

The first sentence says it all: “These policies are an effort to end mass incarcerations and bring balance back to sentencing.”

Next, Krasner instructed his prosecutors to stop charging sex workers that have fewer than three convictions with any crime and drop all current cases against sex workers who also fit that description. All sex workers with three or more convictions are to be referred to Dawn Court – a special diversionary program created in 2010 specifically for sex workers with repeat offenses, the first of its kind in the nation.

Under the heading “Divert More,” Krasner then instructed prosecutors to avoid convictions if possible and guide cases for diversion programs instead of jail and prison.

What Krasner’s memo said next was groundbreaking. First, Krasner instructed prosecutors to stop the wide-ranging practice of beginning plea deals with the highest possible sentencing and instead, begin those plea deals at the bottom end of the available range of time that can be served. And when less than 24 months is available as a sentence for a crime, house arrest or diversion programs should be used instead of incarceration.

It’s what came next that genuinely shocked me. I’d like for you to read it. It’s on the third page of the memo, under the heading “Sentencing.”

Krasner instructed his prosecutors to now add up and justify the exact costs of every single person sentenced to a crime in Philadelphia. Stating that the city is currently spending an astounding $360 million per year to jail around just 6,000 people, Krasner then gave examples of all of the things that such money could be doing in the city currently. Stating that it costs between $42,000 and $60,000 per year to incarcerate a person, he reminded the prosecutors that the average total family income of a person in the city was just $41,000. The annual cost of incarceration, Krasner reminded his prosecutors, was currently more per year than the beginning salary of teachers, police officers, firefighters, social workers, addiction counselors, and even prosecutors in his office.

Krasner then closed out his document with five new policies changing the harsh probation rules in Philadelphia. It’s these very policies that functioned as a trap for Meek Mill.

First, Krasner requested that people either be given no probation after incarceration or no more than a 12-month probationary period. Mill has spent an outrageous 10 years on probation — a five-year term was extended several times due to various violations — dating all the way back to when he was a teenager. Now, as a grown man, nearly 10 years later, he is being held in jail for violating that probation.

Other policies aimed at drastically reducing the length of the probationary periods focused on the fact that, according to Krasner, Philadelphia currently has over 44,000 people on probation. That’s an impossible number to manage. What’s more, the ranks of those on probation are bloated by nonviolent people who shouldn’t even be in these programs. More serious cases end up being harder to track and follow.

From time to time, transformational leaders take office. They show everyone else exactly what can be done and how to do it. That’s Larry Krasner right now – and he’s showing the nation how to dismantle mass incarceration from the inside out.