Pundit Ralph Peters Is Leaving Fox News Because It’s Too Gross Even for Him. That’s an Extremely Low Bar.

The summit of Peters’ philosophizing is “Blood Borders,” a 2006 article in which he hid his hate and contempt for the people of the Mideast in plain sight. Ralph Peters, a longtime Fox News analyst, just quit his job there because, he says, Fox News “is assaulting our constitutional order and the rule of law. … Fox has degenerated from providing a legitimate and much-needed outlet for conservative voices to a mere propaganda machine for a destructive and ethically ruinous administration.” In particular, Fox News hosts “now advance Putin’s agenda by making light of Russian penetration of our elections and the Trump campaign.”

So, now’s a good time to remember an obscure, hilariously hateful moment in Peters’s pundit career — one that says a great deal about both him and his now-former employer.

Peters, a retired U.S. Army lieutenant colonel, is best known for his enthusiastic calls for war with every country on Earth and, if possible, the moon. He also feels that Barack Obama was “a total pussy” who “just doesn’t like America very much.”

But perhaps the summit of Peters’s philosophizing is “Blood Borders,” a 2006 article he wrote for Armed Forces Journal in which he speculates on the ideal way to redraw the borders of the Middle East. “We are,” Peters wrote, “dealing with colossal, man-made deformities that will not stop generating hatred and violence until they are corrected.” What we need, he continued, is “a fairer, if still imperfect, amendment of national boundaries.”

So, Peters, inspired by the need for more fairness in the world, proposed a new version of the Middle East with borders based on ethnicity. Iraq would be split apart, with its northern region becoming part of the new “Free Kurdistan,” the western region becoming “Sunni Iraq,” and the southern region joining some of Saudi Arabia and Iran to become the “Arab Shia State.”

Iran and Pakistan would lose big chunks of territory to “Free Baluchistan.” Saudi Arabia would be split into the “Islamic Sacred State,” containing Mecca and Medina, and a separate country called “Saudi Homelands Independent Territory.”

This was purely the product of Peters’s fervid imagination. But as a consequence of the name of the periodical in which it appeared — “Armed Forces Journal” sounds like something published by the U.S. government, but in fact belongs to Gannett Co. — Peters’s map quickly circulated across the Middle East as a purportedly official American plan for the region.

The late journalist Michael Hastings reported that, while he was in Iraq, he “saw it [in] a Sunni mosque in Baghdad. … The imam had actually printed the map and put it up on the bulletin board with an article in Arabic attached explaining it was the American-Zionist plan to shaft the Sunnis.” Hastings also said Kurdish guerrillas in Turkey “were talking about the same map.” Meanwhile, France’s version of the CIA found that, “In the view of Iranian officials, this journal reflects the main options of the Pentagon and consequently of the White House.” 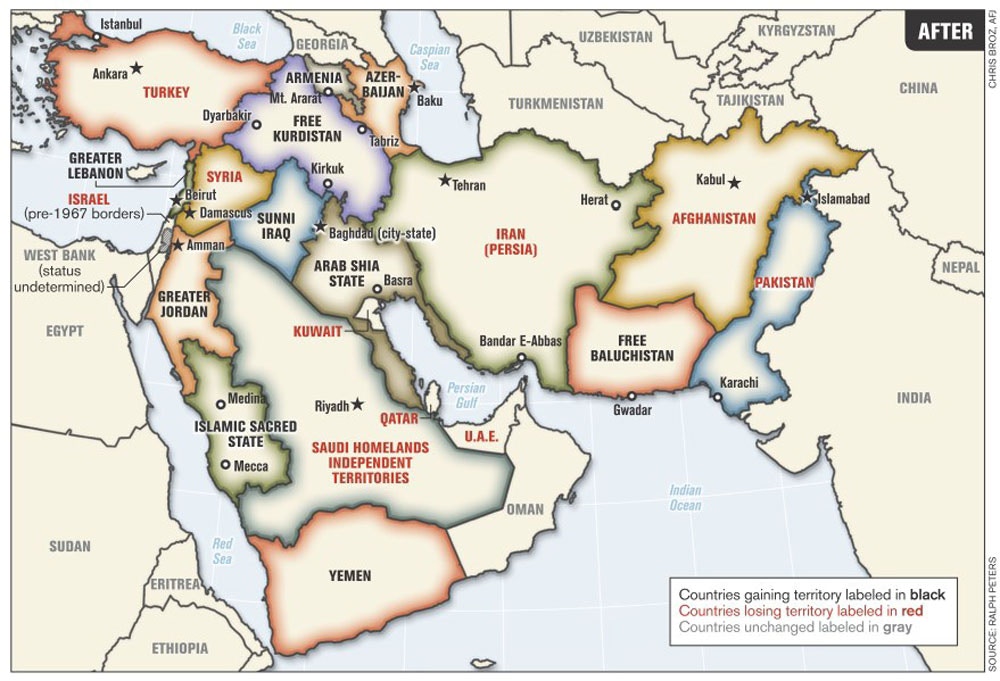 But there’s one thing that went completely unnoticed about Peters and his map:

“Arab Shia State” and “Saudi Homelands Independent Territory” seem like awkward names, don’t they? It’s almost as though they’re “backronyms”: acronyms that started with particular words and then worked backwards. In this case, the acronyms are “ASS” and “SHIT.”

Now, take a look at specifically how Peters referred to these brave new nations:

“Confined to a rump Saudi Homelands Independent Territory around Riyadh, the House of Saud would be capable of far less mischief toward Islam and the world.”

So Peters’s call for more justice for the people of the Middle East was in fact an elaborate joke at their expense, with Peters amusing himself by hiding his complete contempt for them in plain sight.

Think about the level of freakish loathing inside a person required for this, infected and pustulating like an abscess. And then think about the fact that Peters is leaving Fox News because it’s too gross even for him.