The two Democrats running for governor in Georgia fell on opposite sides of a key vote on the role of the banking industry last year. 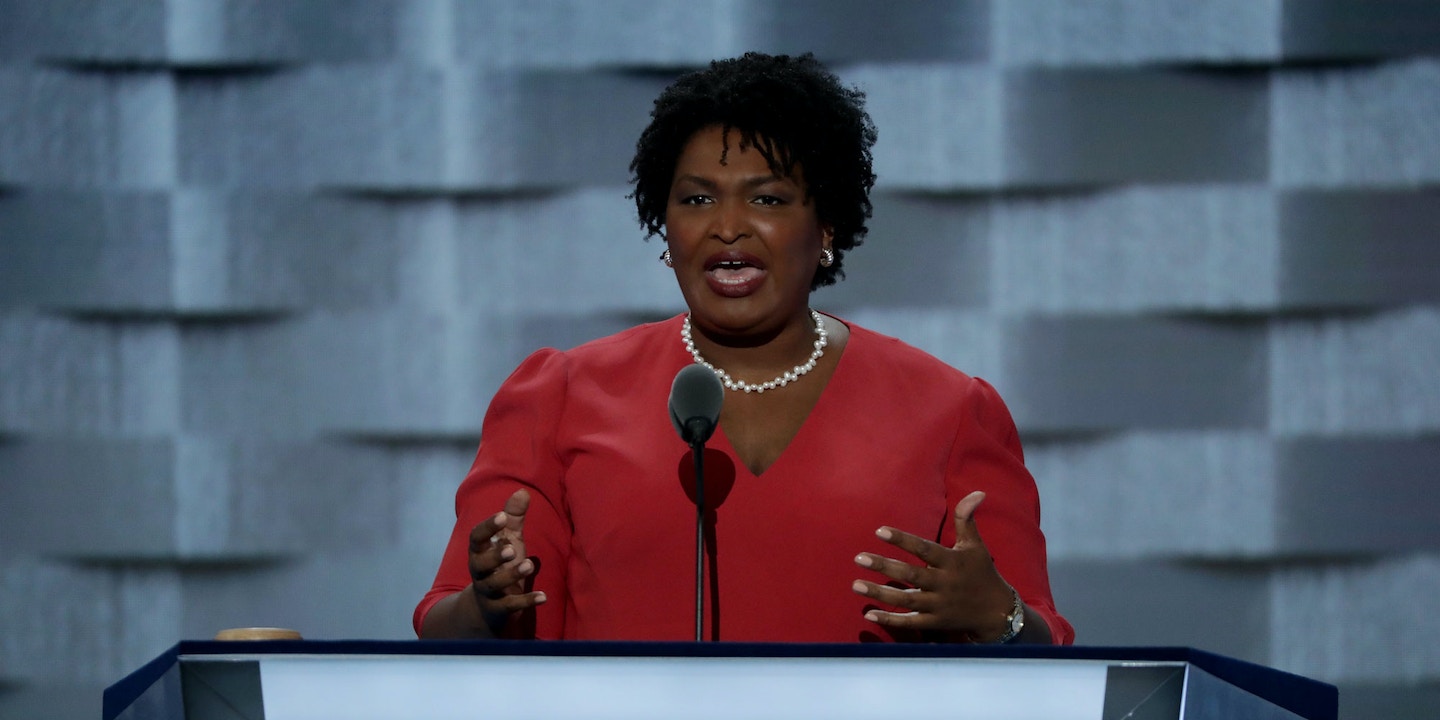 The increasingly bitter Democratic primary for Georgia’s closely watched gubernatorial election this year features two former state legislators, Stacey Abrams and Stacey Evans, each of whom has touted her bona fides as the most progressive, most Democratic, and most viable candidate in the race.

While much of the national attention on the race has focused largely on stylistic differences, a little-noticed vote last year serves as yet another policy break on an issue that has sharply divided the Democratic Party in primaries around the country: the role of the banking sector and the subprime lending crisis.

In a vote last year over a bill called HB 192, which changed the liability standard for bank executives, Abrams sided with Georgia Republicans and the banking lobby, while Evans led the opposition.

Georgia has a particularly ugly history with predatory lending. The state was one of the hardest hit areas of the foreclosure crisis, with a record-breaking number of banks that failed in part because they targeted subprime customers with deceptive promises and hidden fees.

Some of the most abusive lending practices were pioneered in the metro Atlanta area, where banks targeted vulnerable longtime homeowners and lured them in to refinance loans that ballooned in cost, prompting a crushing wave of foreclosures. Many of those targeted were elderly African-Americans, who were cash poor but owned prized homes in quickly gentrifying neighborhoods.

In a belated move to hold those responsible accountable, the Obama administration, using the Federal Deposit Insurance Corp. and the Federal Trade Commission, filed a number of civil lawsuits against Georgia bank officials, in attempts to recover damages from executives that the regulators claimed had fueled reckless bank practices.

In one such case that shocked the banking industry, FDIC v. Loudermilk, the Supreme Court of Georgia upheld claims by the FDIC that former directors and officers of Buckhead Community Bank, which had failed during the financial crisis, were liable for nearly $5 million in damages for making dangerous loans that violated the bank’s own internal guidelines and lacked proper documentation. The lawsuit was filed in 2012, but it was hung up for years as appellate courts grappled with questions that would impact whether the case could go to trial. The state Supreme Court issued its ruling in 2014, and the jury verdict did not come down until October 2016.

Bank lobbyists and industry analysts were alarmed by the case. If bank executives and officers could face liability for reckless behavior, that might reshape the entire industry in Georgia.

Within months of the verdict, the banking lobby moved swiftly to back HB 192, a bill introduced in January 2017 to effectively reverse the state Supreme Court decision. The legislation changed the liability standard, making it much more difficult to prosecute executives and high level officers for decisions made at Georgia banks.

The bill, sponsored by an all-Republican delegation, was listed as a “priority” bill by the Georgia Bankers Association. Representatives of several financial services industry lobby groups, including the Georgia Chamber of Commerce, pressured legislators to quickly pass the bill.

State Rep. Beth Beskin, R-Atlanta, the sponsor of HB 192, defended the legislation as a necessary step to bring stability. “We need to be consistent with other states,” Beskin said. “It’s hard to get people to serve on bank boards if they’re open to legal liabilities.”

At the time, Abrams served as leader of the Georgia House Democratic Caucus. When it comes to divisive issues before the legislature, the Democratic Caucus leader typically makes a speech in opposition to a bill to explain the caucus position.

Instead, on the day of the vote, it was Evans who rose to represent the Democratic Caucus and gave the “minority report” opposing HB 192.

After Evans rose to speak against the bill, she returned to her seat in the chamber. Abrams then walked over to Evans to confer with her, as shown in the legislative video from the day, though audio of the exchange is not available.

Following that conversation, the roll call opened, and Abrams cast a vote in line with nearly every member of the Republican Caucus in support of HB 192. Evans voted against it, along with 30 other House Democrats.

The Abrams campaign did not respond to multiple requests for comment on the vote.

For some members of the state legislature, the vote was highly symbolic.

Former state Sen. Vincent Fort, D-Atlanta, served as Democratic whip during the debate over HB 192, which Georgia Senate Democrats voted almost unanimously against. Fort is known nationally for his work crafting wide-ranging anti-predatory lending laws in 2002 that experts say could have prevented much of the housing crisis. Under pressure from the banking industry, the laws were later repealed by Republicans as subprime lending took off during the housing bubble.

“Bottom line, the bill would allow for the same kind of abuses in subprime banking that we saw in the ’90s and 2000s, and would have given even less accountability for bank officers and directors,” said Fort. “It was a red flag to me and that’s why I organized our caucus to fight against it on the floor.”

“I remember vividly the bank lobbyists were on high alert,” Ford said of HB 192. “I believe this was their priority bill that legislative session to protect their bank officers from being held accountable,” he added. The Georgia Democrat noted that the banking lobby had killed his landmark reform in the past, and continues to marshal outsized influence in the legislature.

Progressive state Rep. Spencer Frye, D-Athens, recalled corporate influence behind the bill. “This bill was lobbied heavily by the industry,” he told The Intercept.

Frye has made standing up for working-class people a cornerstone of his campaigns since he was initially elected in 2012. As a Habitat for Humanity director, he won that year by defeating an incumbent Democratic lawmaker who refused to sign a pledge to limit lobbyist gifts to lawmakers.

He sided with Evans in opposing HB 192.

“I was opposed to HB 192 because it would have pre-empted the case-law derived doctrine of the Business Judgement Rule. Shareholders should be able to expect a method to hold the directors and officers of a company accountable for their bad actions,” he said. “This legislation was in response to the Loudermilk decision; the intent was to codify the protection of directors and create a higher standard of proof of negligence thus making shareholder justice more difficult to attain.”

The Georgia legislature has particularly close ties to the banking industry. Not only are a number of banks headquartered in the state, with an army of lobbyists handing out regular campaign contributions and gifts to key legislators, but several lawmakers have direct financial ties to the Georgia banks.

State Rep. Greg Morris, R-Vidalia, the House Banking Committee chair, was one of the officials sued by the FDIC for gross negligence and breaches of fiduciary duty over his role at Montgomery Bank & Trust, a bank called that was closed in 2012. Republican state Sen. John Kennedy works at a small law firm that serves as general counsel to the Community Bankers Association of Georgia, one of the main industry groups pushing for the bill.

Neither Morris nor Kennedy recused themselves from the vote on HB 192. In fact, Kennedy was the primary co-sponsor in the state Senate, which his law firm’s client, CBA of Georgia, touted on its website.

Abrams, notably, has received thousands of dollars in donations from the bank lobby groups involved in the HB 192 fight, including the Georgia Bankers Association and the Georgia Chamber of Commerce. In her current bid for governor, she has received contributions from a range of financial services employees, including from Georgia-based banks such SunTrust and Signature Bank of Georgia.

A recent investigation from the Atlanta Journal-Constitution found that Abrams also served as a vice president at NOWaccount, a startup payments business that contracted with the Georgia government. The company served as a partner to the Georgia Chamber.

Fort pointed to the HB 192 vote and other instances in which Abrams sided with Republicans on contentious policies, such as the decision to reduce early voting days and the controversial vote to limit Georgia’s “HOPE” scholarship by raising the GPA threshold required to receive tuition-free college. In both cases, Abrams sided with the Georgia GOP, a position she has claimed was necessary to get to the bargaining table.

She was confronted on the latter vote by a former student during a candidate forum in March. “No one’s going to be happy with every choice we make. Part of leadership is making hard choices. It’s easy to say what’s perfect when you don’t have to be responsible for getting there,” she responded.

“I’m a progressive,” said Fort. “I know Abrams is trying to remake herself as a progressive icon, but her collaboration with Republicans and the financial industry on this issue, as well as on cutting early voting in 2012, indicate that her progressive credentials are suspect at best.”

Frye emphasized that the law effectively shields those who made it harder for poor people and ethnic minorities to gain access to Georgia’s economic prosperity.

“My goal is to strengthen corporate oversight for shareholders and not dilute it. Since 2000, Georgia has had the most failed banks of any state, making Georgia the worst state in the nation to invest in a bank. Our banks should be regulated for the good of our citizens,” said Frye, noting that “banks have been the driving force behind the wealth-race disparity which plagues our nation.”

“These institutions have been responsible for policies which have affected black access to capital, thus exacerbating the wealth-race financial gap we now see today. Furthermore, with a law like HB 192, it encourages crony capitalism by lessening the accountability of bad actors in our financial sector and giving immunity for negligent decisions which cause harm to our economy and financial well-being,” he added.

Correction: April 9, 2018
An earlier version of this article incorrectly referred to Georgia state Rep. Spencer Frye as a former Habitat for Humanity director. In fact, he still holds that position.